A Slug and Other Critters

Somewhere skies are blue and the sun is shining. . . but not here. Here in my part of Illinois, the temperatures have warmed up from the frigid cold of a few weeks ago, and the snow is slowly melting away. But in its place an endless gray cloud seems to have descended along with either rain or fog. These non-stop gloomy skies have zapped what little energy I had and have turned me into a couch potato. I understand completely how people with S.A.D. must feel at this time of year, but my problem is not depression so much as a lack of motivation. I have been substitute teaching for several days, which is probably a good thing because otherwise I would have never left the house this past week.


There are many projects in the house I would like to get done before spring, and I have accomplished a little . . . very little. After a few hours of sorting papers and getting rid of some of the clutter in my office, I'm bored. When the post-lunch slump hits, I'm likely to "rest my eyes" for an hour or two on the couch. By late afternoon I'd much rather visit awhile with my friends Oprah and Ellen than get back to work. And then it's time to fix dinner . . .

Even my amaryllis is drooping . . .

Since I've been such a slug, let's see what other members of the household have been up to. 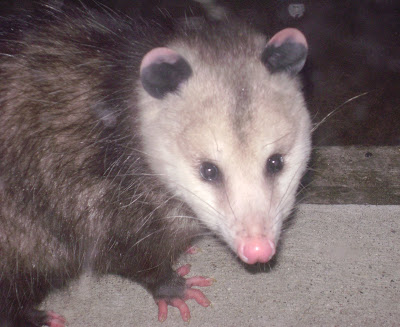 We had an unusual visitor a few nights ago. This opossum came up to the patio doors and peeked in, perhaps looking for a late-night snack. When Sophie spied him, she went crazy, as you might expect, and didn't let up barking until the possum had checked out every inch of the patio and finally disappeared. I wasn't about to let Sophie outside at that point, not knowing what would happen if a possum tangled with a dog. Apparently, this guy has taken up residence here, because last night when I let Sophie out for a final "business trip" before bedtime, I spied him out in the far back yard. Again I worried what would happen when Sophie saw him, but it was sleeting and the driveway was so slippery, I wasn't about to venture from the safety of the garage.

I knew Sophie saw him--her ears perked up, and she soon broke into a full gallop to reach him. Apparently, opossums are much smarter than I've ever given them credit for--this critter was unfazed by Sophie's appearance and meandered past her in his slow gait till he disappeared into the nearby shed. Sophie wasn't expecting this--no game of chase?? Well, that's no fun! After watching him go by and sniffing the strange scent he left behind, she finally returned to the house, disappointed. 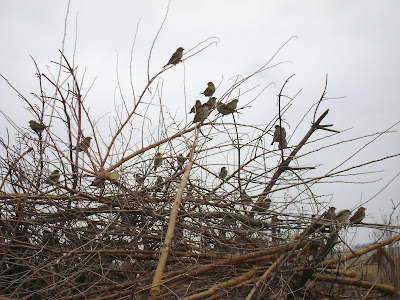 The birds are much more fun. Mr. Procrastinator trimmed some limbs and cleaned up brush into a big pile shortly before the cold set in. The sparrows love this brush pile and gather here several times a day. Part of Sophie's early morning routine is to check out the birds and then chase them as soon as they fly off. 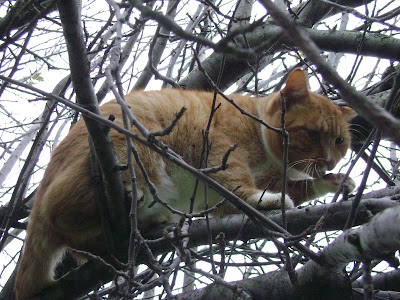 On warmer days, Tarzan likes to join in the fun. "See, Sophie, if you want to catch a bird, you have to be able to climb trees like me and sneak up on them quietly."

Please note: No animals--four-legged or two-legged--were harmed during the filming of this post. 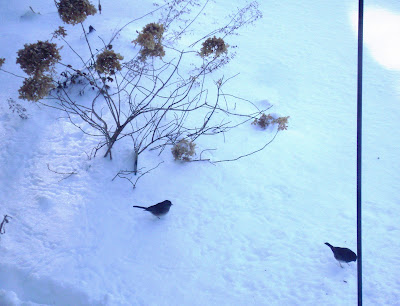 I prefer to do my bird-watching from indoors. During the cold spell two weeks ago, juncos, cardinals, bluejays, and woodpeckers could all be seen from the comfort of the living room. 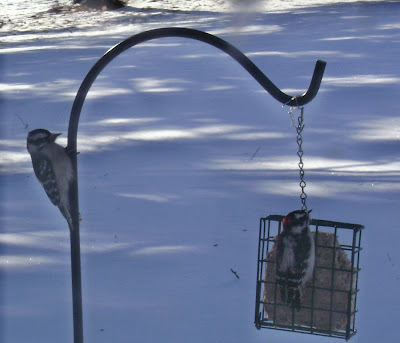 A pair of downy woodpeckers were regular visitors at the suet feeder. (I took about 40 pictures one day, only to discover I should have adjusted the settings on my camera to adapt to the shadows. As bad as this one is, it was the best of the bunch.) Now that much of the snow has left, so have the downys and the juncos. I hope this means that they're finding natural food sources and not that they have left for the winter--I just stocked up on suet cakes! 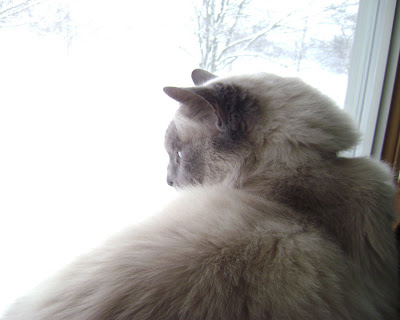 Toby is disappointed, too, that the front-yard birds have disappeared. Still he sits patiently every day hoping for his afternoon entertainment--in between naps. 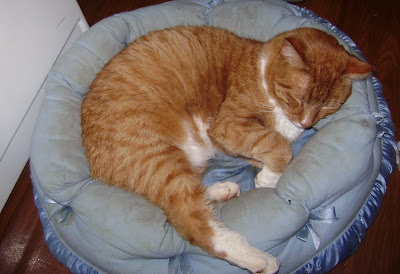 Speaking of naps, Tarzan discovered that the bed left behind by Coconut (Youngest Daughter's Pomeranian now residing in Oregon) suits him just fine. He, along with Sasha and Marmalade, have always been primarily outdoor cats, but when the cold weather hit, I let them stay in the garage. That was fine with Marmalade, who was too shy to have her photo taken here, but it wasn't good enough for Tarzan or Sasha. 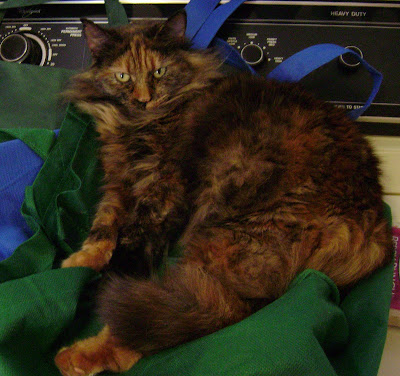 While Tarzan has taken over the doggy bed, Sasha finds the top of the dryer and the recycle bags are quite comfy. Toby doesn't bother her here--he has grudgingly accepted the fact that these two are now living indoors, though he is still king of the roost--and Sophie can't reach her.
Speaking of Sophie, someone once asked how the cats got along with Sophie. She still likes to indulge in a game of chase with them at times and gets very jealous if Toby crawls onto my lap, much like a young sibling. But otherwise, they tolerate her. Toby has been known to box Sophie's ears if she gets too rambunctious . . . 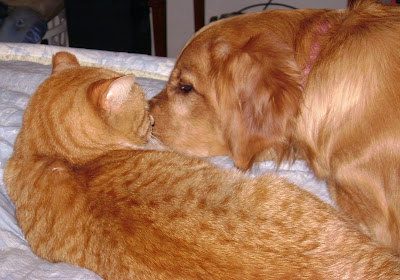 . . . but Tarzan is the master of dog manipulation. "I have as much right to this bed as you, Dog, so don't expect me to move." 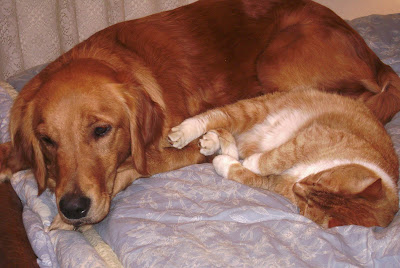 It's hard to argue with that . . . besides, Tarzan's purring is quite hypnotic.
Hmmm, that bed does look inviting . . . maybe I'll just "rest my eyes" for a few minutes again . . .