Patience is a Virtue: April GBBD

"Patience is a virtue" was a favorite saying of one my favorite high school teachers.  Mrs. G was my Home Ec teacher--this was the 60's, mind you, when girls were still expected to learn all kinds of homemaking skills.  She repeated this phrase often as we ninth graders grew frustrated with cooking and sewing disasters, such as my friend who had to tear out a skirt zipper nine times before getting it right!  After my many years of teaching, I suspect, however, that she repeated this mantra as much to keep her own frustrations in check as much as ours.  I know I would have.

I have been reminded of this saying the past month as my patience has worn thin waiting for spring to arrive.  I know I'm not alone as the crazy weather has affected many parts of the country.  From torrential rain to snowstorms--central Illinois has had more snow in April than any other month this winter--to constant gloomy, chilly days, it has been a depressing start to spring.  It doesn't help that we were spoiled last year. Last year we had an early spring, and I had crocuses blooming by the end of February.  By April, daffodils, tulips, and even some spring perennials were blooming.  The flowering trees had already bloomed by Bloom Day as well.  But this year?  Well, let's just see what we can find.... 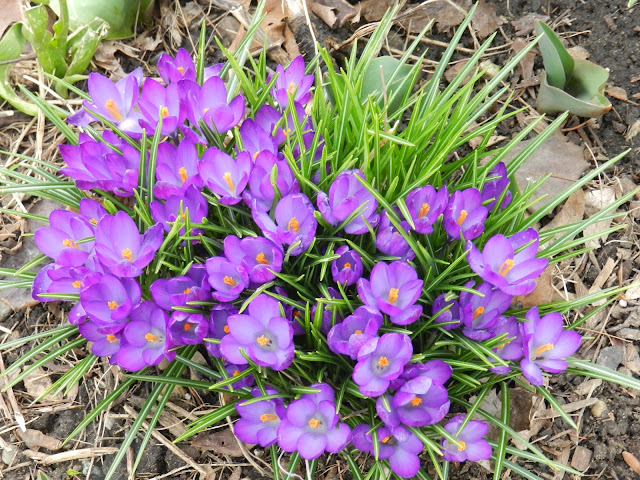 For my March Bloom Day post all I had to show were some snowdrops and the first yellow crocus.  By the end of March other crocuses were blooming as well. 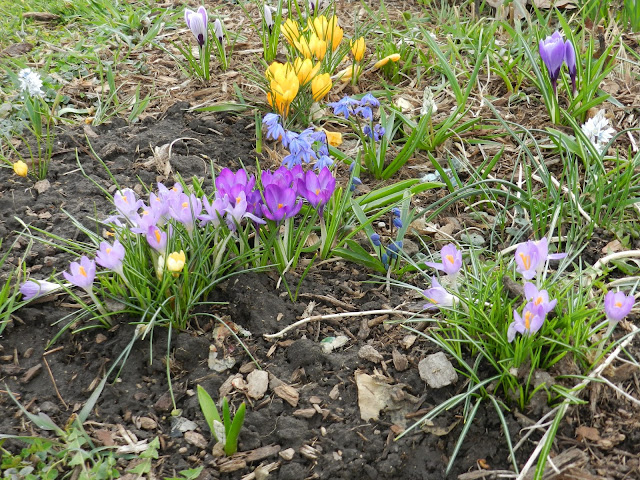 Roco's memory garden had a variety of crocuses and other early small blooms, including Puschkinia and Scilla.  My favorite crocus 'Pickwick,' a larger lavender and white, is just opening up at the top of this photo.  I never did get a good photo of one of these, unfortunately. 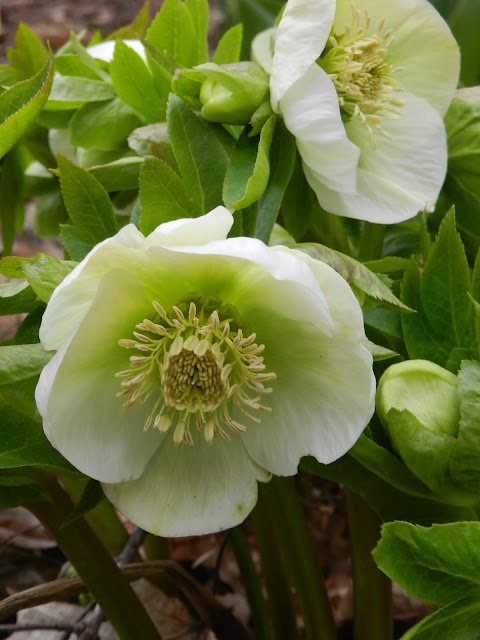 The crocuses are pretty well finished, but other early bloomers are not.  The Hellebores, which began to bloom about the same time as the crocuses, are really hitting their peak right now. 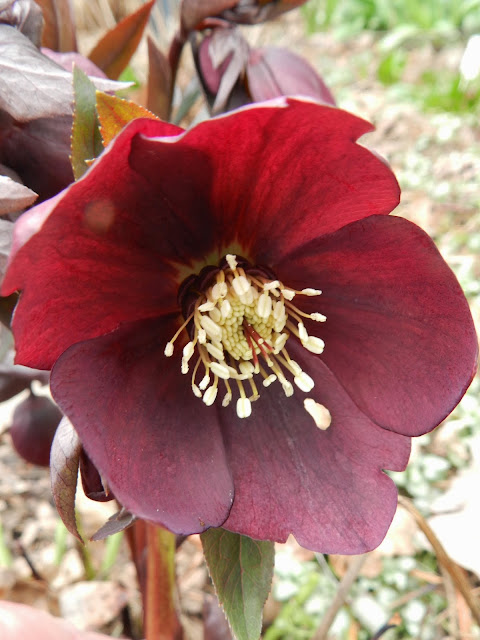 I have several different colored singles, all whose names are now forgotten.  Cleaning up the garden has been a challenge this year because warm, sunny days have been few and far between, but I did manage to get out one chilly day and trim back the old foliage on all of these so that the blooms could really shine. 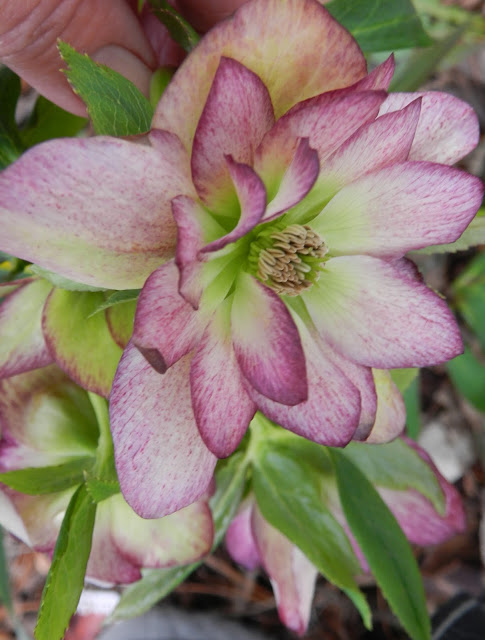 I have two newer Hellebores as well that are doubles.  They don't have many blooms yet, but the few they have are so lovely.  I've forgotten the exact cultivar name, but this one is part of the 'Wedding Series.' 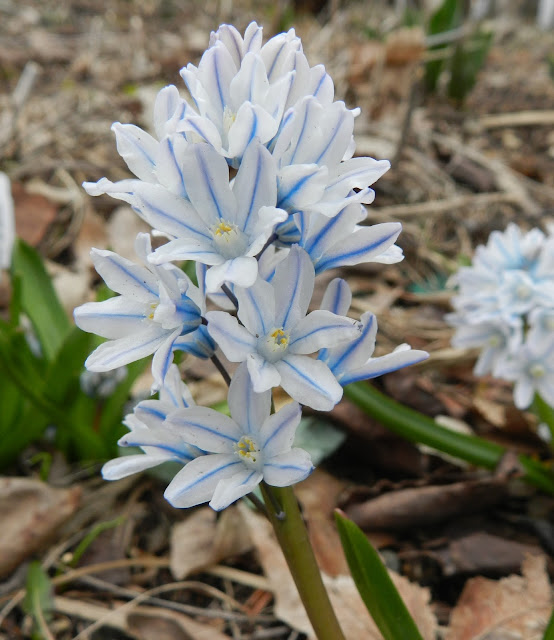 One of my favorite little blooms this time of year are the Puschkinia.  I didn't remember they bloomed so early, but they have been popping up everywhere the last few weeks.  I've planted more and more of these little beauties the last few years because I like them so much--aren't they sweet? 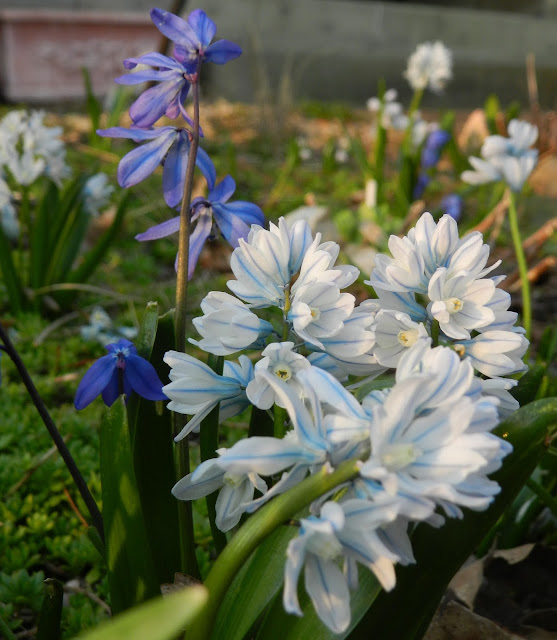 I especially like them paired with the blue Scilla.  When you plant bulbs like this, you never know whether they will bloom at the same time, so I'm happy that the timing worked out. 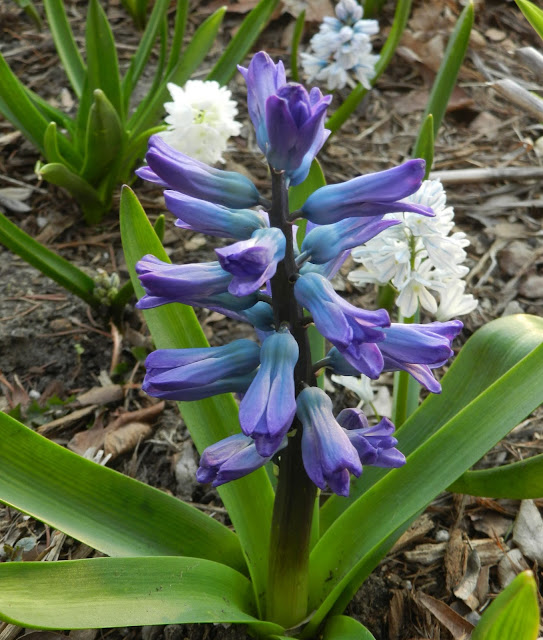 The hyacinths are just starting to bloom.  I have some pink and white ones as well, but the purple ones always seem to do the best for me. 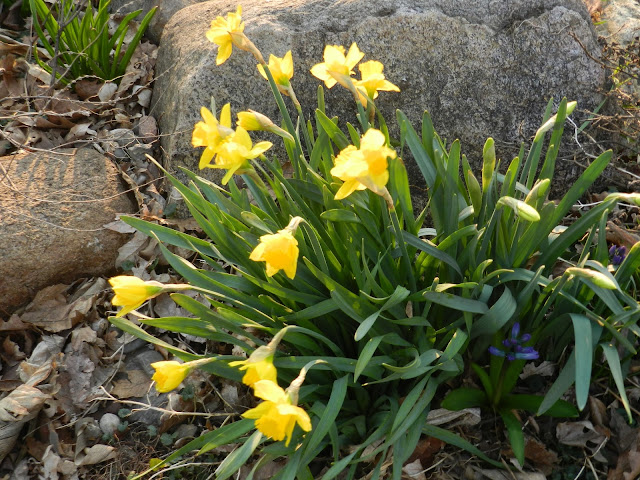 I was beginning to wonder if I would ever have any daffodils this year, but they are just really late.  A few warm days this past week have really encouraged the blooms to open up. 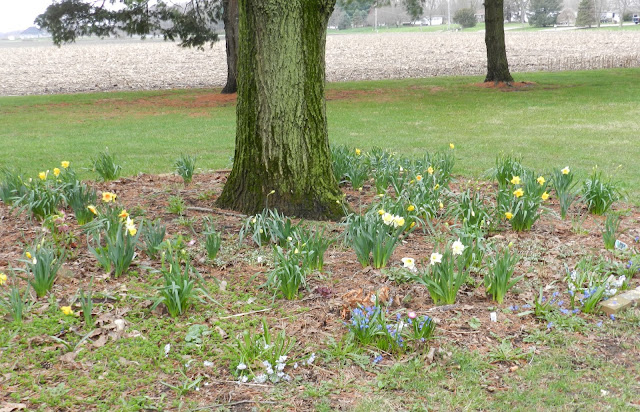 The bulbs I planted in part of the shade garden surrounding an oak tree are starting to fill in.  If I remember it, I might stick some kind of markers in the empty spaces to remind myself where more could be planted next fall.  It's not easy planting around big tree roots, though! 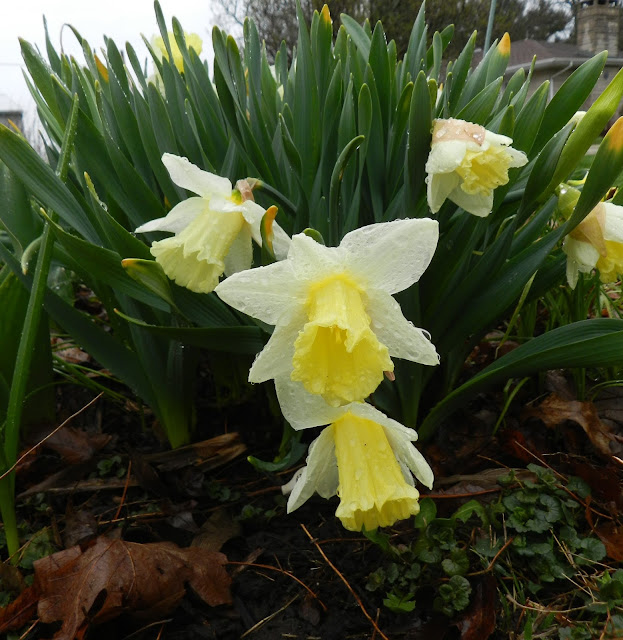 I've been planting more and more daffodils in recent years, especially in the areas farthest from the house, to avoid deer and rabbit damage.  Usually, I purchase large mixed bags, so I rarely know the name of each type.  This one in the Arbor Bed, though, is 'Mount Hood'--or so I thought.  'Mount Hood' is a large white daffodil, so I'm not sure what is going on here, or if I'm just confused about its placement, which wouldn't be the first time.  Notice even this vigorous bloomer doesn't appreciate the cold rain today. 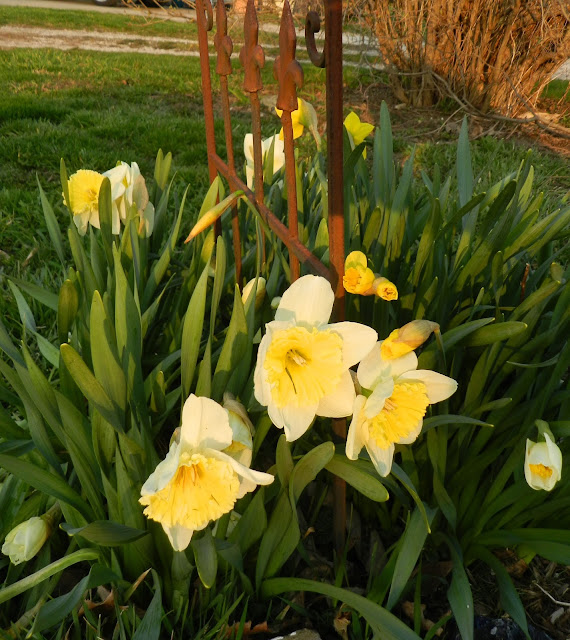 More daffodils in Roco's memory garden (also Sasha's and Tarzan's garden now) on one of the few sunny mornings we've had.  This past week we had three sunny, mild days that were perfect to work in the garden, and I took advantage of them to do more clean-up of garden beds.  Today it's back to cold and rain with a chance of that dirty word 'Snow' tonight!  So frustrating.  But I'll be back in the garden on the next reasonably nice day, trying to get the rest of the clean-up done.  With any luck, I'll be finished before the tulips start to bloom!


Thanks to Carol at May Dreams Gardens for faithfully hosting  Garden Bloggers' Bloom Day each month.  And thanks to Mother Nature for finally giving me a few blooms to share this late spring!
Posted by Rose at 5:54 PM 30 comments: