Happy New Year everyone!  I just put up my new calendar and like seeing all those clean white spaces--I know they will fill up quickly, but for now they suggest so many possibilities and opportunities.  Before I plunge into 2016, however, I would like to reflect on the past year and think about some of the lessons I learned in 2015.

2015 started off on a high note: a new grandson was born right before Christmas, our first grandchild to live too far away to see immediately.  So we counted the days until early January when we could make the trip to Texas to hold this precious little addition to our family. 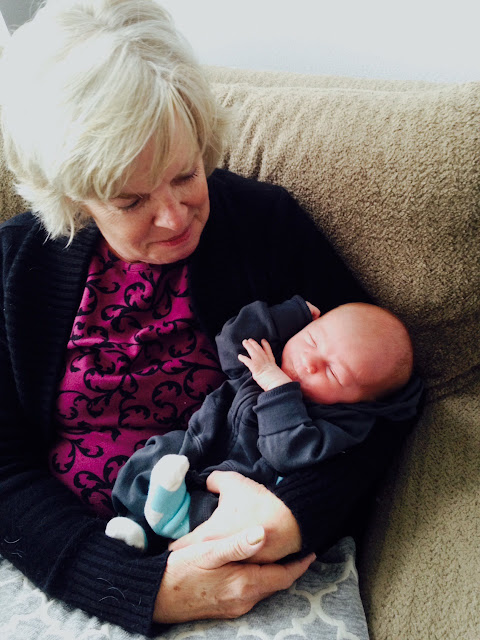 We left on a snowy day and returned to more snow and icy roads. But unlike the previous winter, snow was not a problem this year--in fact, there were times I wished we had had more to provide some insulation for the garden on the cold, cold days. 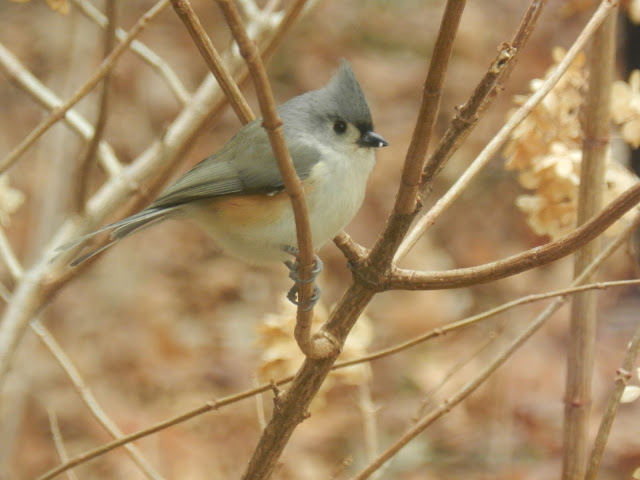 I'm not sure what I did all winter.  There's a lesson for this year--I need to take advantage of the downtime from the garden and get some much-needed housework done!  But I did enjoy the slower pace of winter to take time and watch the birds.

By March I was ready for spring. Typical of the Midwest, spring teased us with a few warm days here and there, but it was slow in coming.  By mid-April there were crocuses, daffodils, and some hyacinths, but I was still waiting for the first of many tulips to appear. We left for another week in Texas in mid-April, and while we were gone, warm weather arrived and the garden went into overdrive. 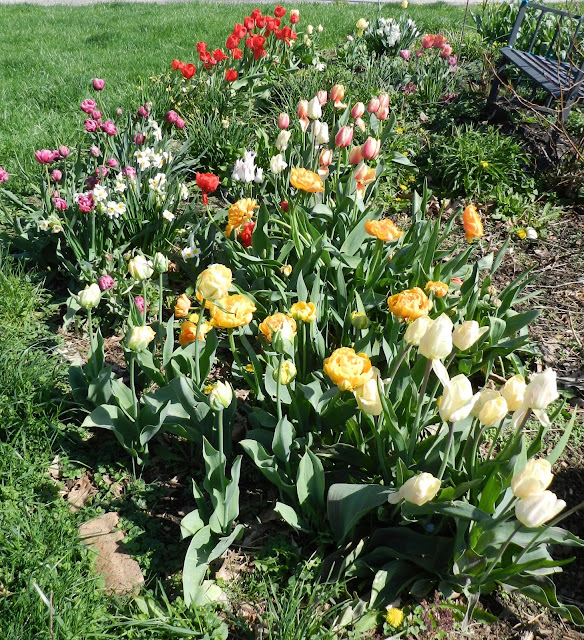 Imagine waking up after a late arrival home the night before and finding masses of tulips and daffodils in bloom that weren't there the last time you saw your garden.  It was as if the garden had suddenly exploded into full color! 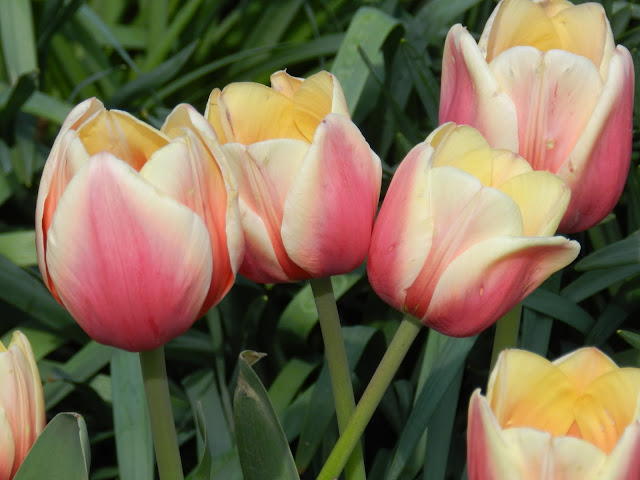 I was reminded once again how much I love spring. More than the New Year, spring represents a fresh start to me, a renewal and re-birth, and a promise that life goes on, no matter what dark days may have lain in the past. 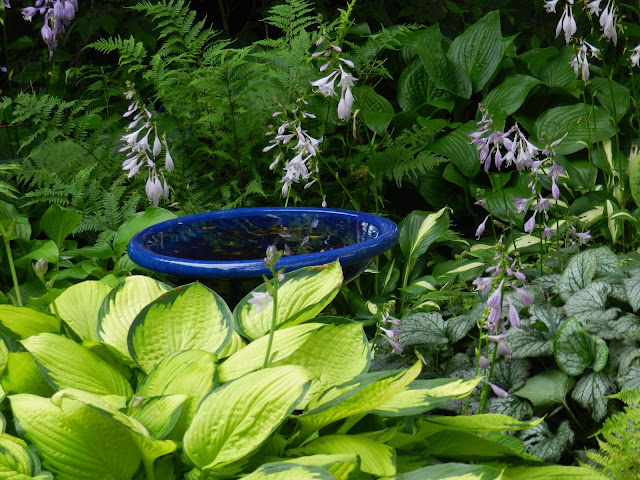 In May my world changed, as my mother was rushed to the hospital one day.  Gardening chores were pushed to the bottom of my priority list as I made daily trips to the hospital and then longer trips to the nursing home where she was sent for rehab.  I learned some valuable lessons during this time, including the reminder that you can't do it all, and that it's okay to ask for help, which I did. 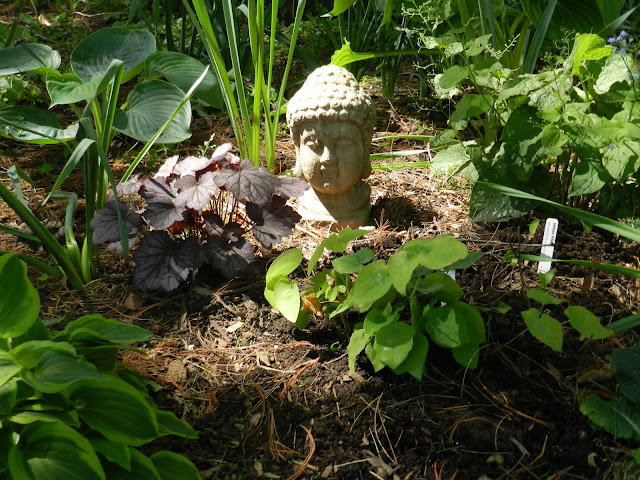 But most importantly, I learned even more the benefit of "garden therapy."  After several days spent sitting by Mom's bedside, it was a joy to get out one morning and just play in the garden for awhile. As someone once said, "You can bury a lot of troubles digging in the dirt." 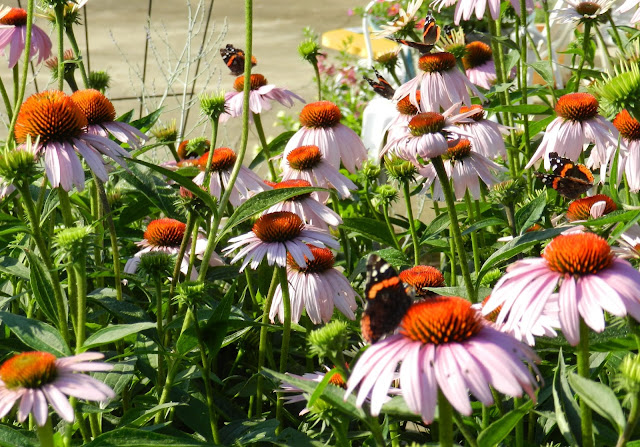 While I often was nagged by thoughts of weeding and all the other chores that needed to be done, the garden became my sanctuary this past summer.  What could be more uplifting than seeing a multitude of coneflowers open their blooms, drawing butterflies by the dozens? 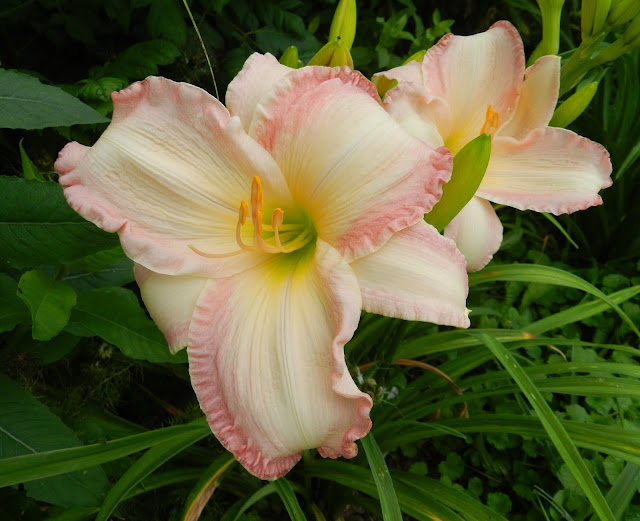 And then there was Lily season.  Each day I would stroll through the garden,
enjoying the latest bloom to open. 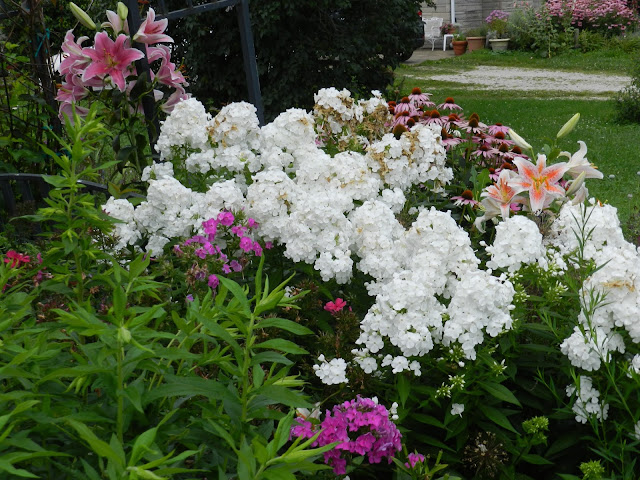 We had plenty of rain through most of the summer, resulting in a profusion of blooms.  I learned to ignore the weeds--for the most part--and focus instead on all the beauty around me. 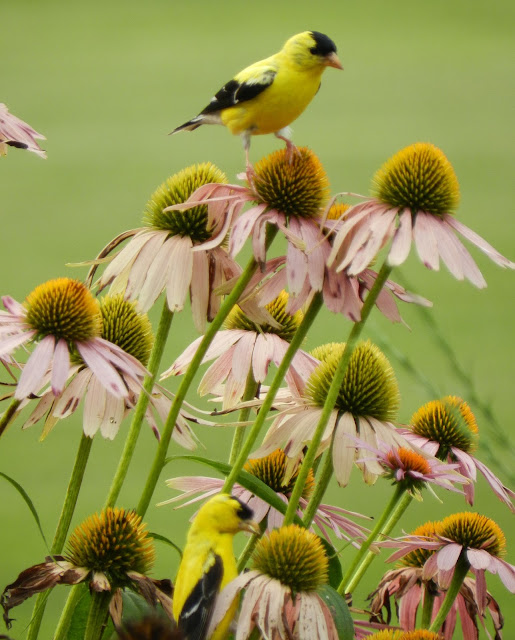 As summer wound down, many blooms began to fade, but there was always something to enjoy and lift my spirits as I looked at the garden. 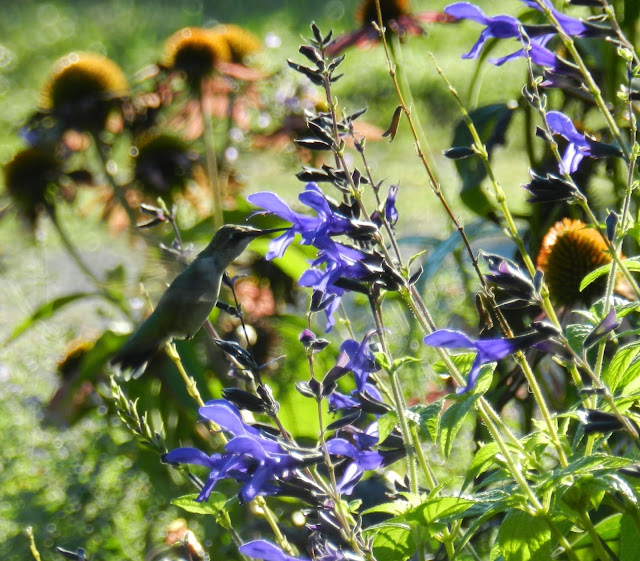 From the goldfinches to the hummingbirds to the butterflies and bees,
I was reminded that the garden isn't just for me. 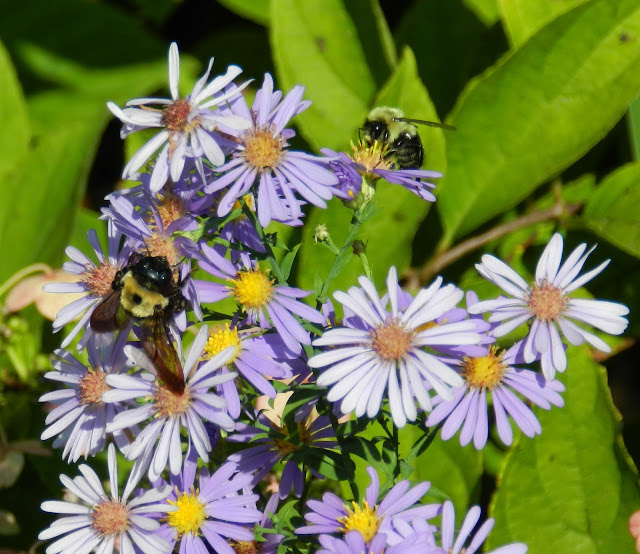 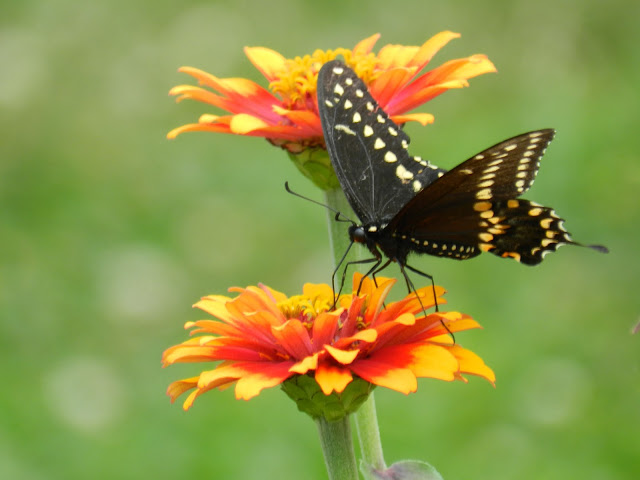 Butterflies were more abundant this year than last, which made me happy, and I was glad that I had planted some of their favorite things. 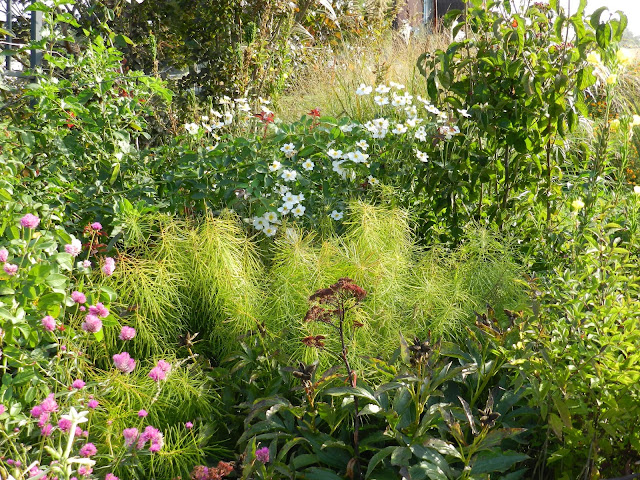 Fall finally arrived, and a beautiful season it was!  We had no rain the entire month of October which was rather worrisome, but other than making bulb-planting difficult for awhile, it gave me plenty of sunny days to prepare the garden for winter.  A light frost in late October killed most of the annuals, but the rest of the garden carried on until a killing frost in mid-November.  Autumn is usually the shortest season in Illinois, but this year I can't complain as we enjoyed extended warm weather. 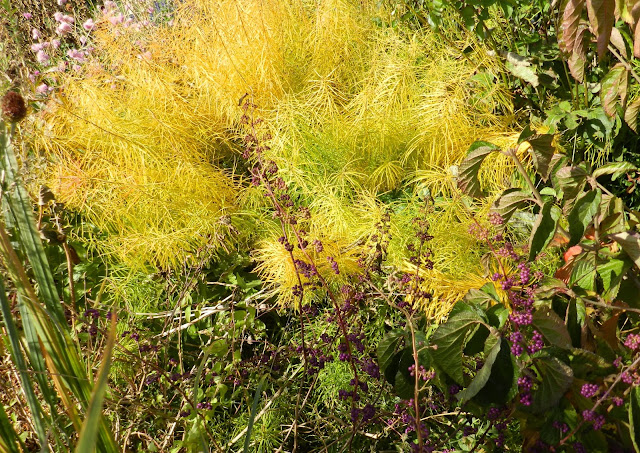 By December I was consumed with Christmas preparations and plans for another trip to Texas to celebrate Grandson's first birthday.  But I probably could have worked in the garden at times if I had wanted--it was one of the warmest Decembers on record.  It was also the wettest December on record, with torrential rains right after Christmas that flooded the streets and highways.  I think the drought is officially over!


As I look back at the past year, I realize how much gardening is a metaphor for life.  From May onward, my mother's health has been my top concern as she went from one health crisis to another.  She is now permanently (barring some miracle) residing in a nursing home, and we have learned to accept that we don't know what the future will bring.  In the same way, we never know what Mother Nature might have in store for us.  As gardeners, we can nurture plants and try our best to eradicate weeds and pests, but there are some things that are just out of our control.  The garden, like life, has its ups and downs which we simply must accept. Over the years, the garden has taught me again and again how important it is to embrace those good days and to enjoy the moment.  One thing I do know, however--spring will eventually return, and the cycle of life will begin again.

During this past year, especially the last eight months, I have really slowed down on blogging.  I appreciate all of you who have taken the time to visit and leave a comment, even when I haven't had time to read your own posts in awhile.  Blogging friends are the best!  I wish you all--

Health, happiness, and a beautiful garden in the New Year!


Although I am very, very late, I'm linking this post to Plant Postings' Garden Lessons Learned. I'm looking forward to participating--in a more timely fashion, I hope--in this quarterly meme in the coming year, as there is always something to be learned in the garden.