It's Garden Bloggers' Bloom Day once again, and I'm so excited!  After months of trying to be creative in finding something that classifies as being a "bloom," I finally have some real blooms to show this month.

It's been a very late spring compared to past years, but warm weather last week finally convinced my garden that it was time to wake up from its long winter's nap.  The first blooms to appear were a few spindly snowdrops discovered hiding under a pile of leaves, as I began garden clean-up.  Next were the crocuses, which started blooming the first week in April. 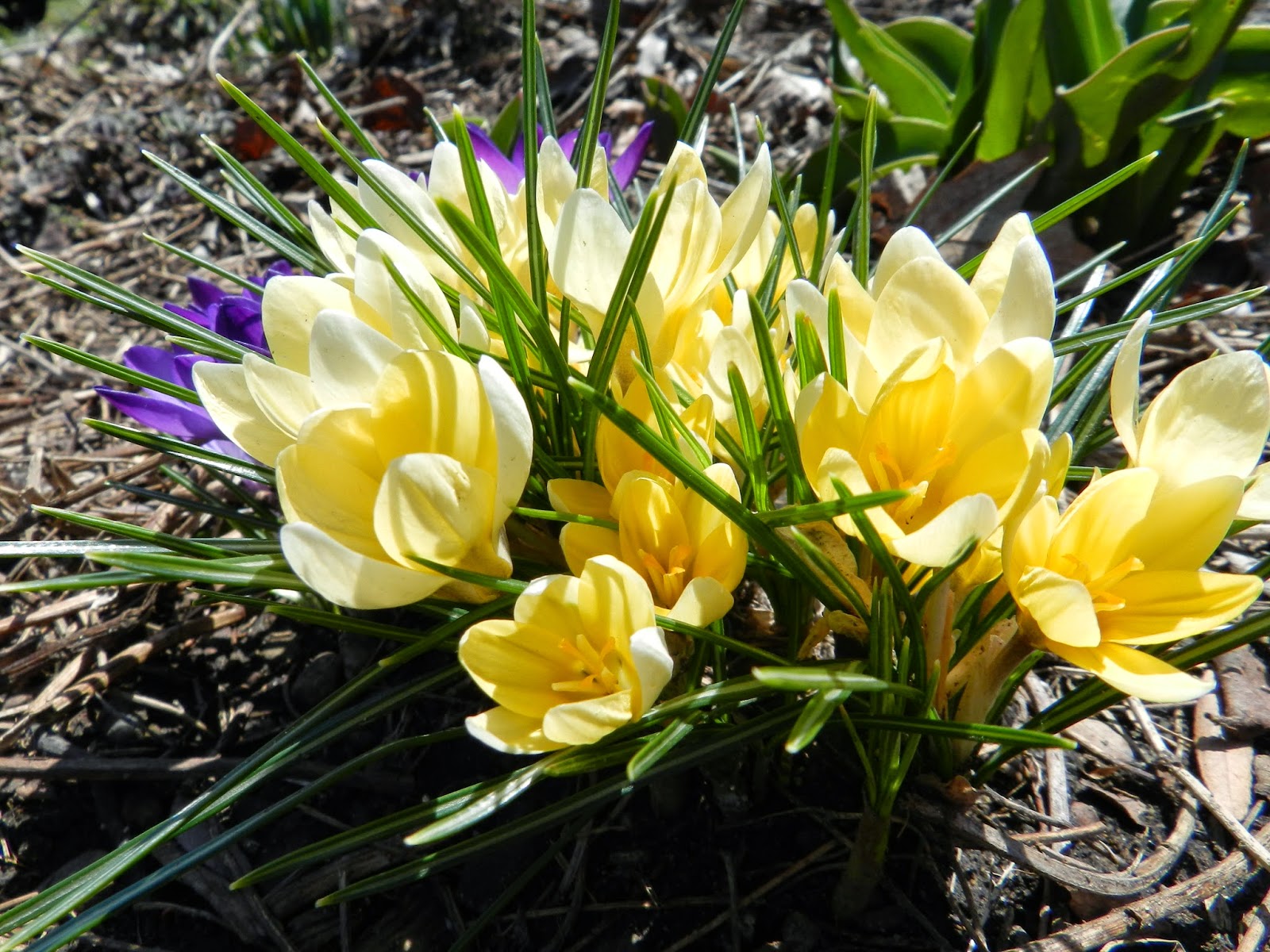 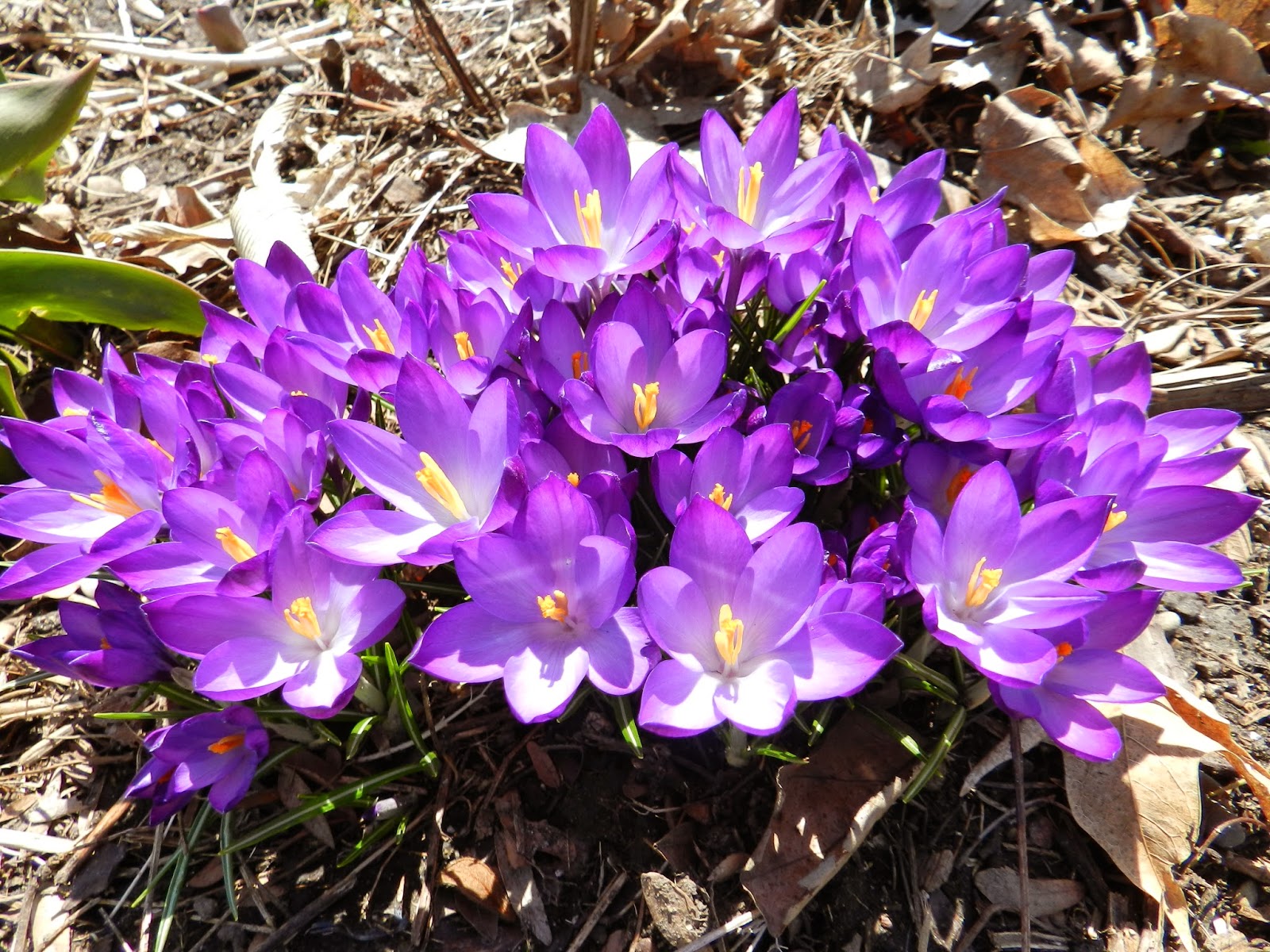 By this weekend, the spring growth had accelerated, and new blooms were opening up each day. 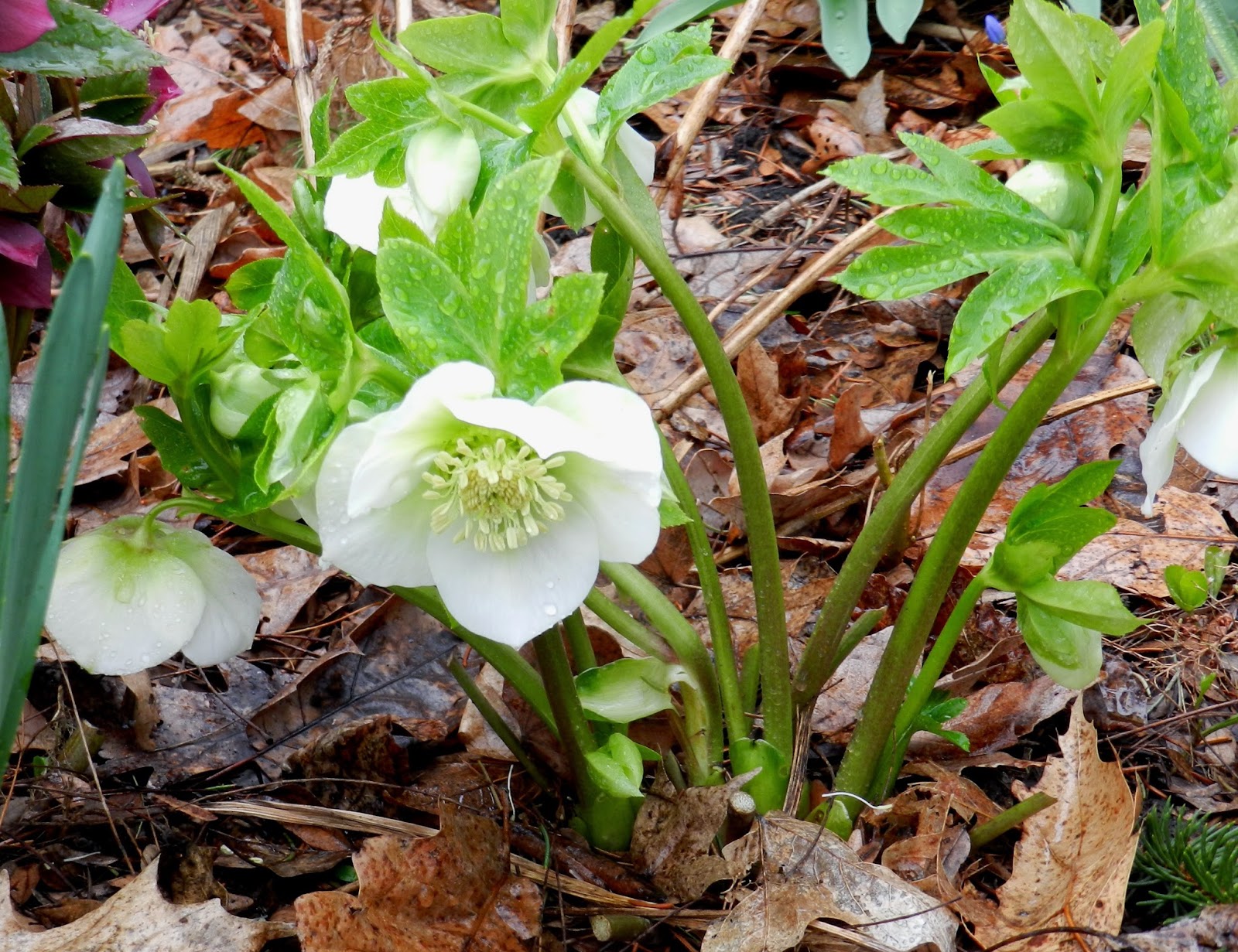 One of the first clean-up chores I accomplished in the garden the past two weeks was cutting off the old foliage of the hellebores, and just in time. 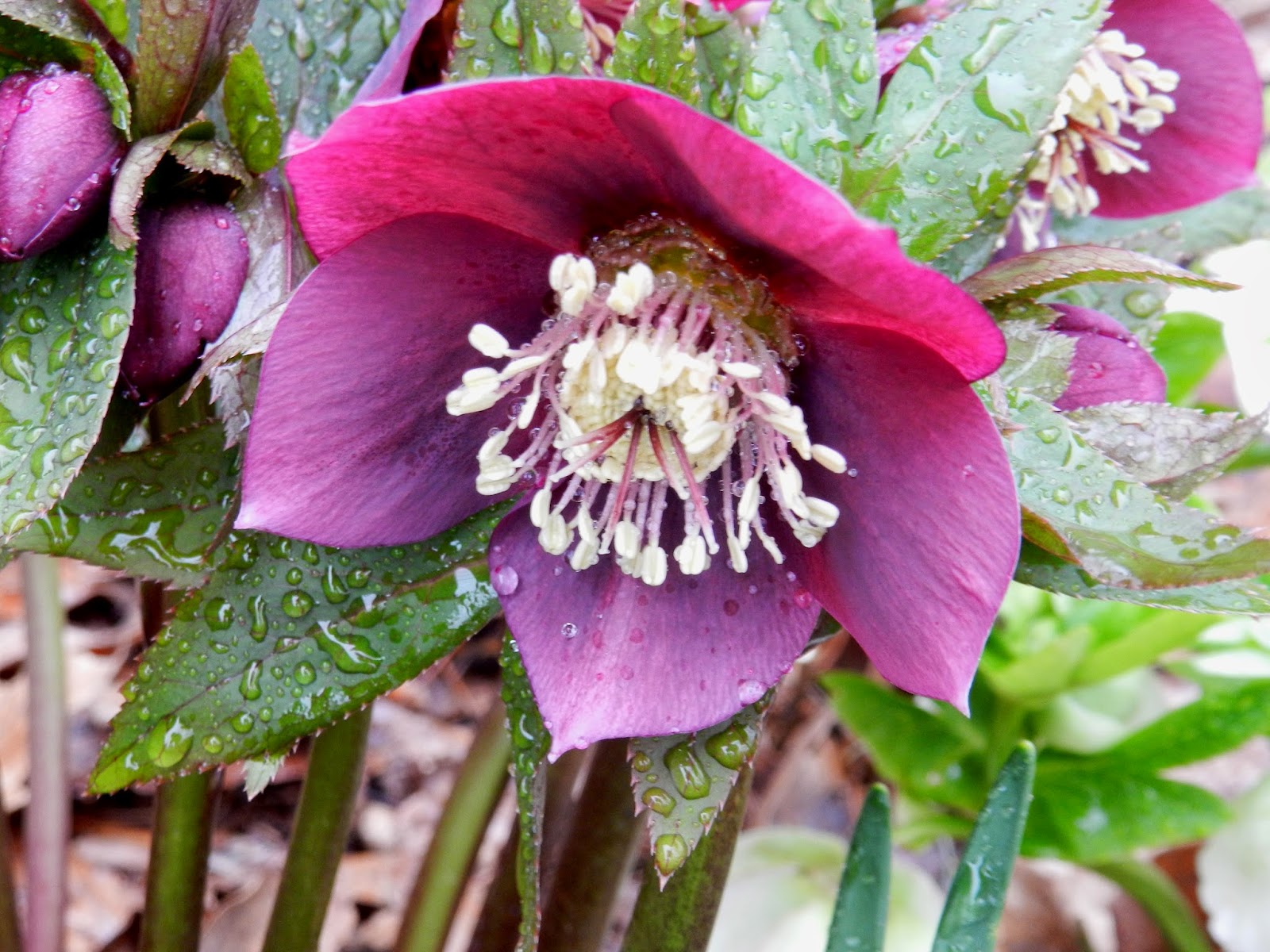 This is 'Red Lady,' I think, and one of my favorites,
because the blooms are more upright than the white ones. 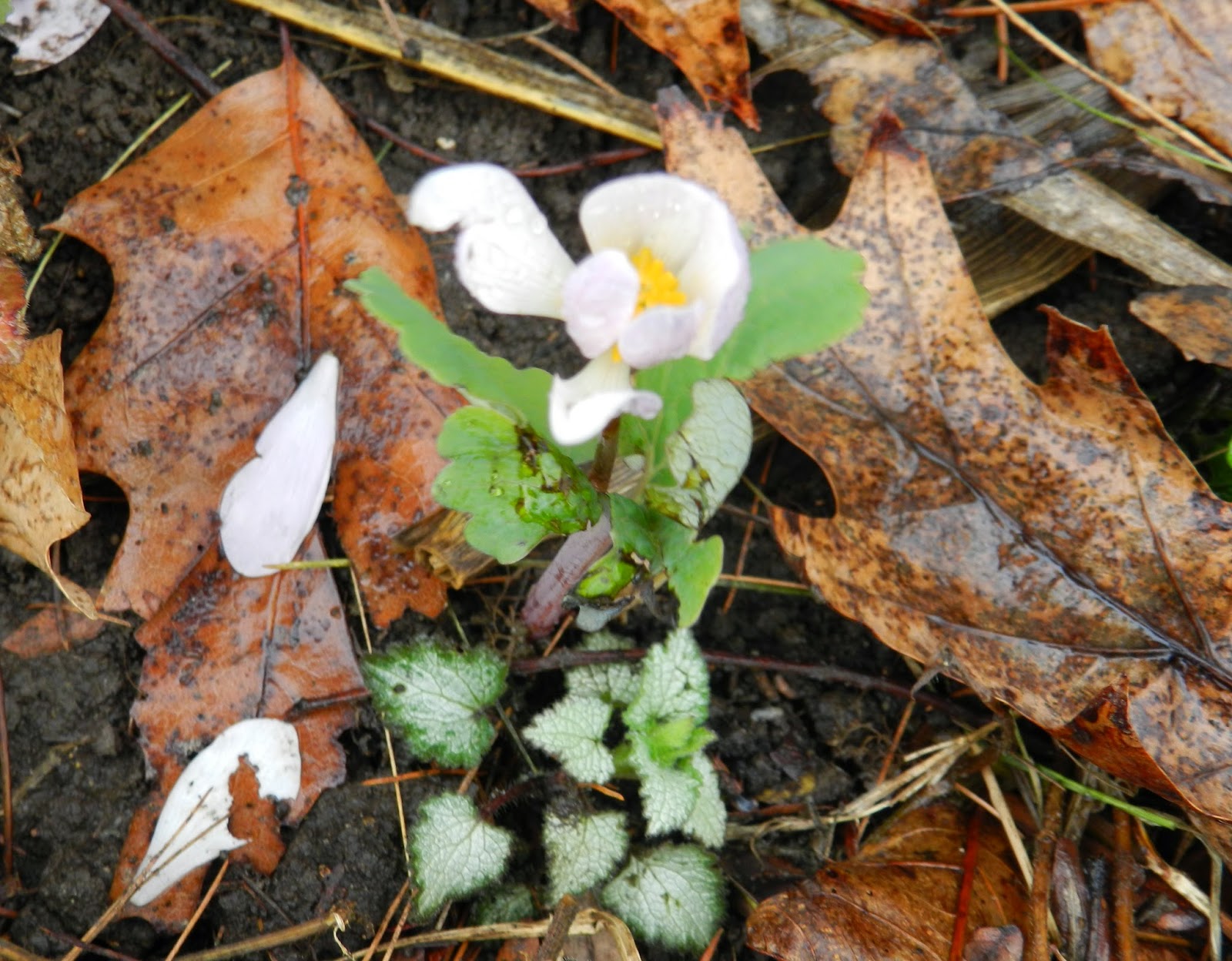 A new bloom I'm excited about--it's hard to tell from this fuzzy photo, but this is bloodroot.  I just received this passalong plant from an elderly Master Gardener who has been an inspiration to me, and I'm so happy it seems to have transplanted well. 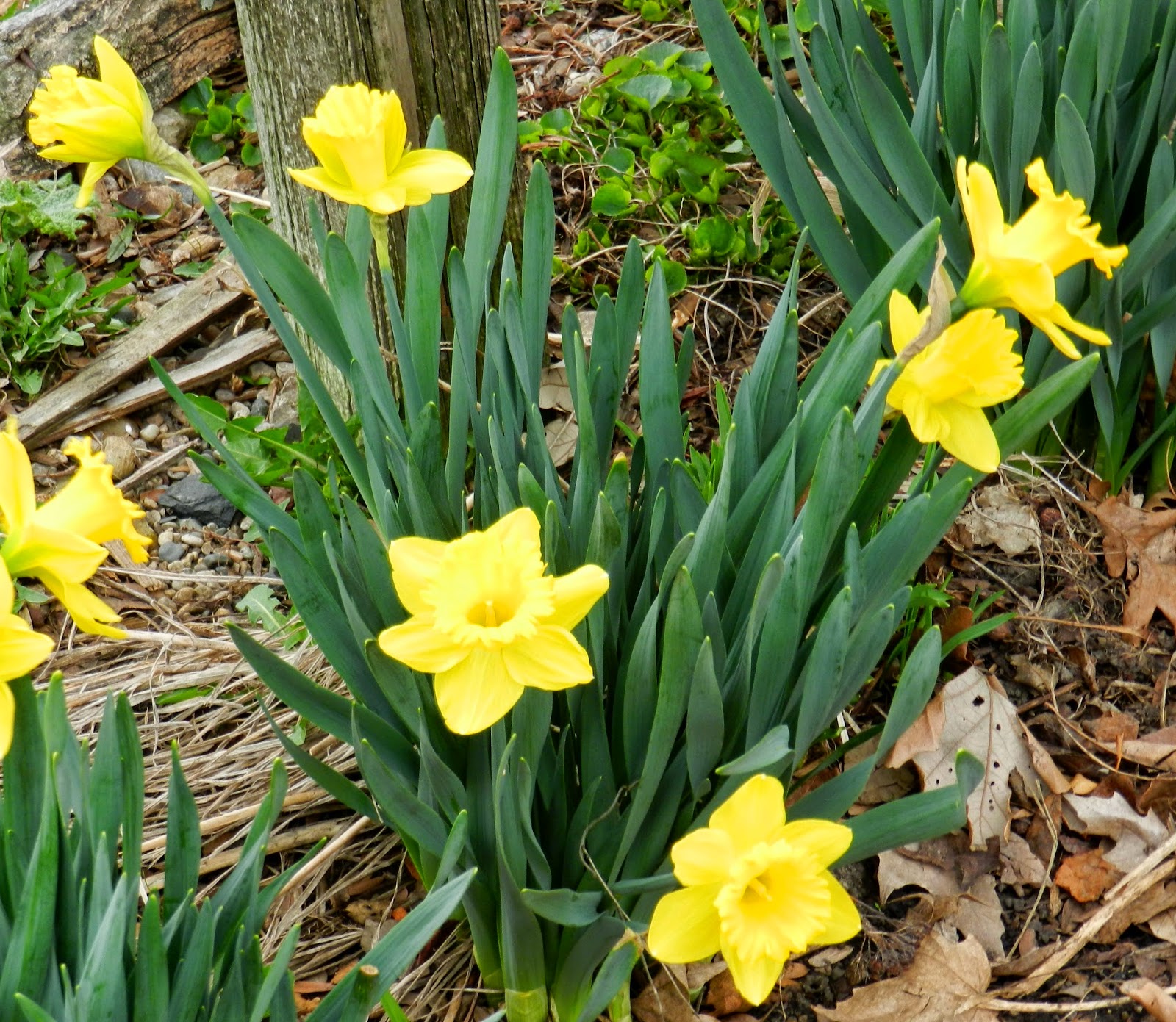 The early daffodils seemed to shoot up overnight. 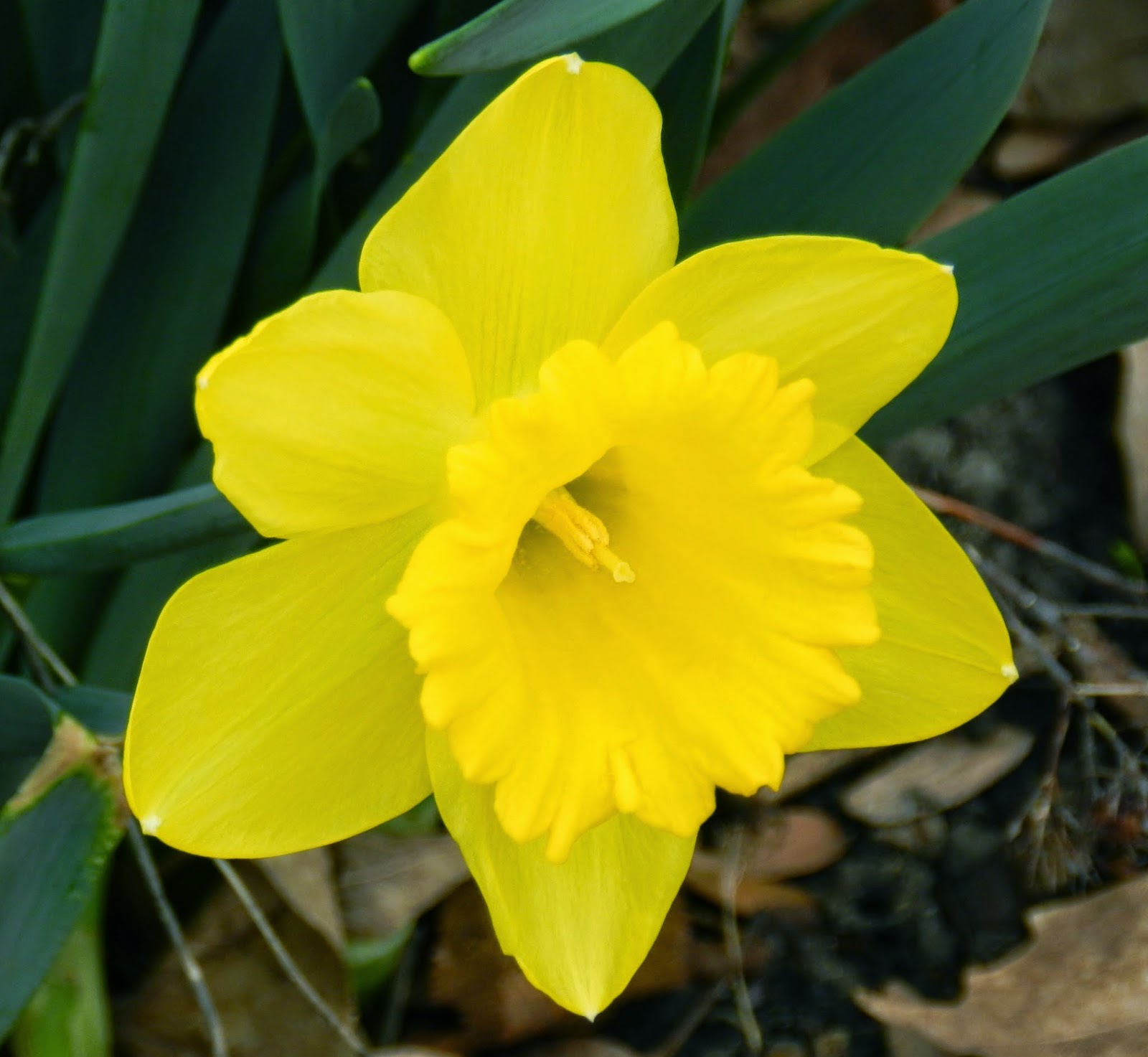 I have planted so many other types of daffodils in the past few years, but these standard yellows (name forgotten) always lift my spirits because they are the very first to bloom. 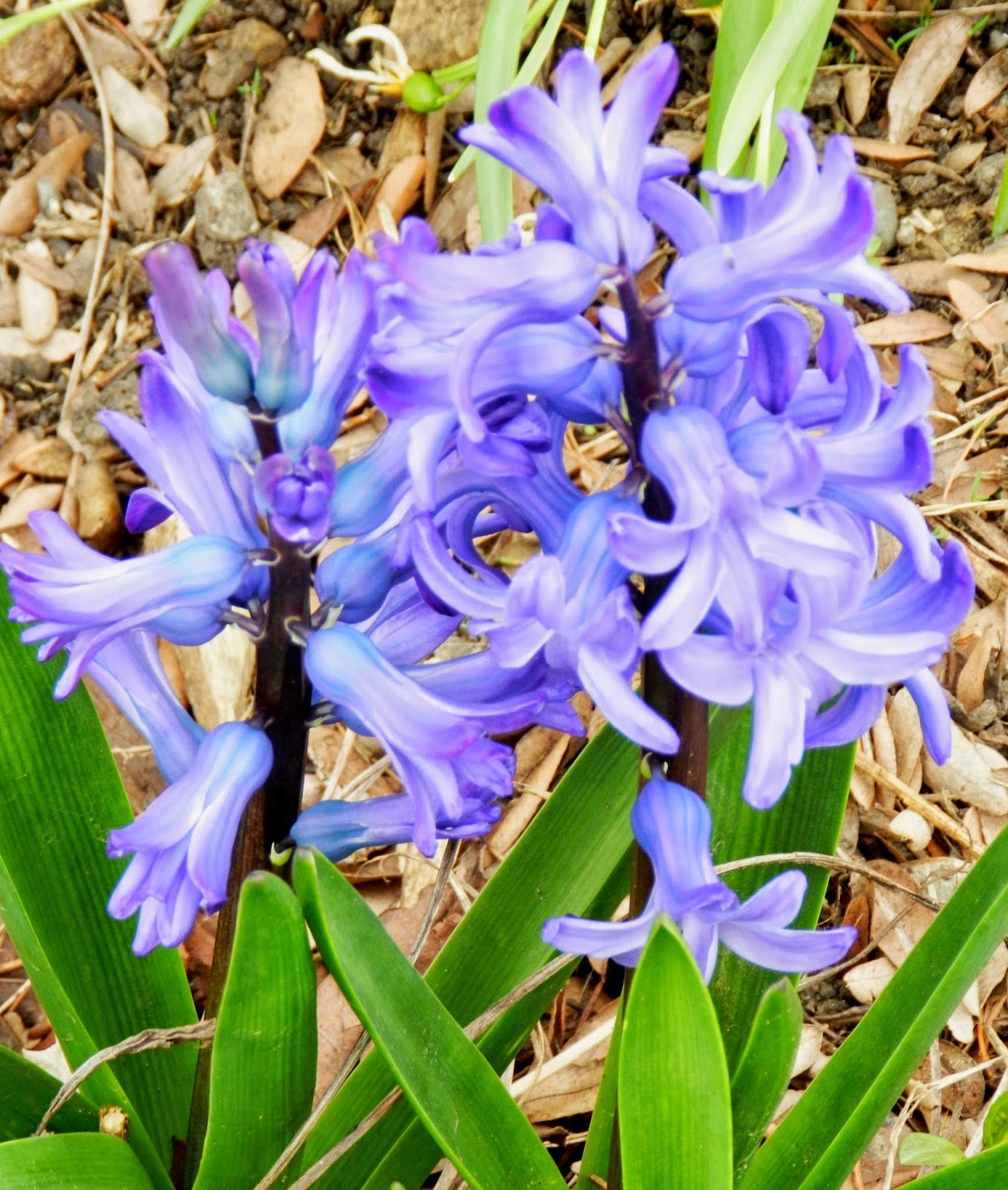 Hyacinths are just opening up, too.  I've been wondering why all my photos have looked so washed out lately, and this morning I finally discovered the reason--my camera has been on "snow" setting for months!  There's an irony here, as you'll soon see. 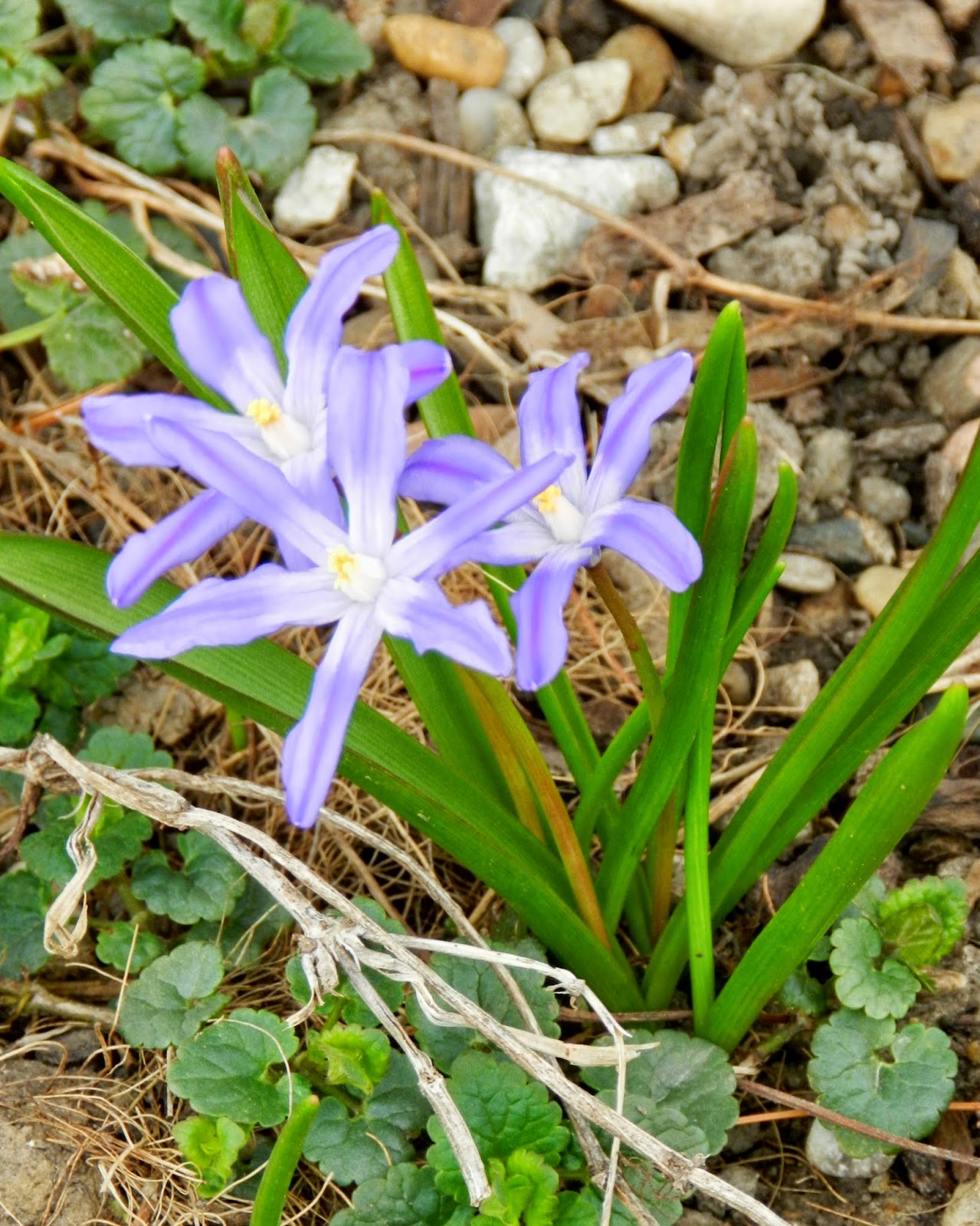 A happy surprise under the lilac--I thought these were Scilla at first, but then realized they were Chionodoxa, also known as glory-in-the-snow.  I don't remember ordering these, let alone planting these, but I'm delighted to see them.  Notice I also have a healthy crop of creeping charlie--my garden nemesis--that was unfazed by our harsh winter. 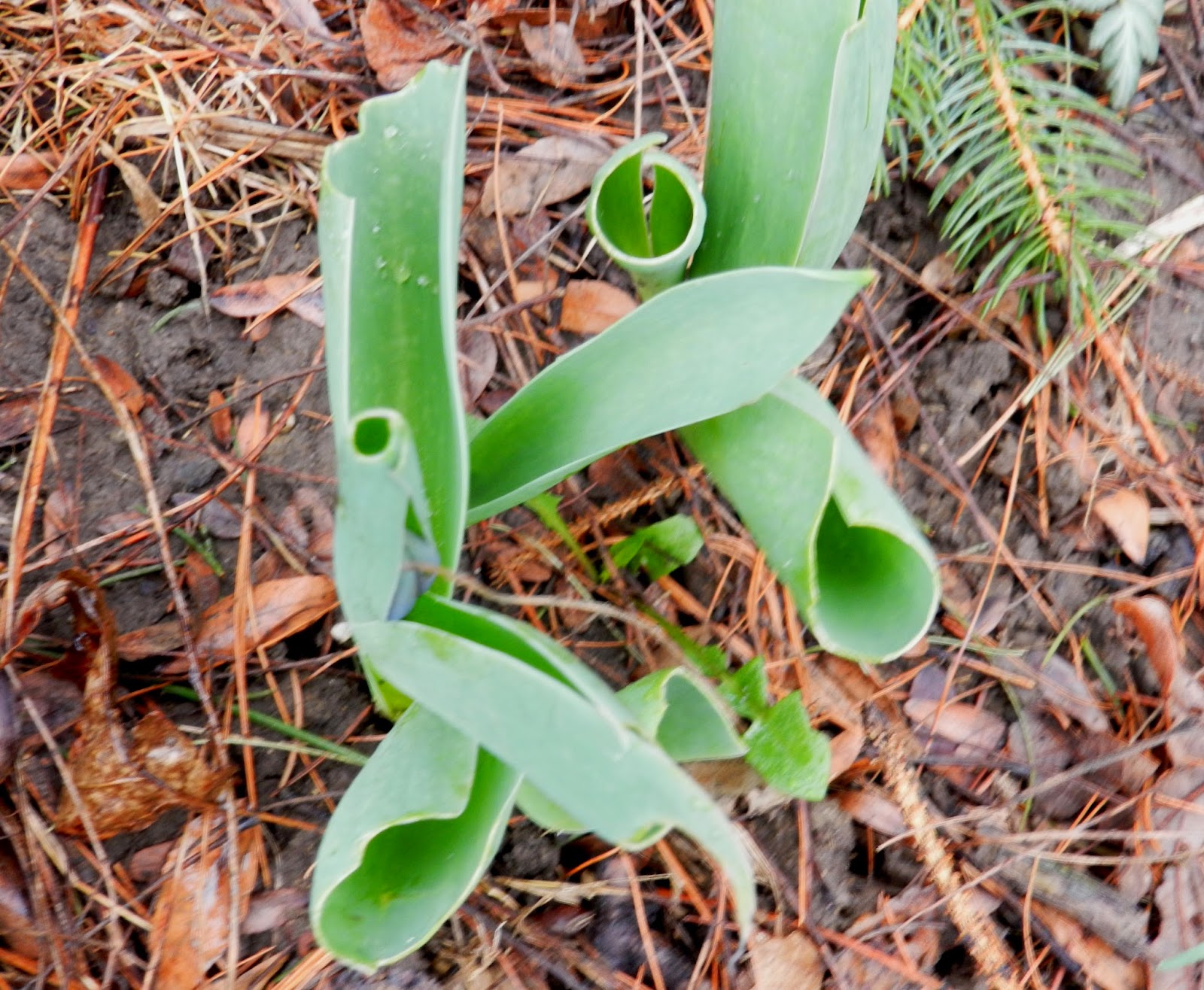 Not every surprise this spring has been a happy one, however.  Walking around the garden with a friend on Saturday, we noticed many of the tulips had been chewed off.  Whether the damage is due to rabbits or deer, I'm not sure, but I am definitely not happy!  I have never had a problem with either deer or rabbits bothering my garden much in the past, but this winter has been a hard one for them, too.

It's a good thing I took photos of the garden yesterday, because this morning we had another unpleasant surprise . . . 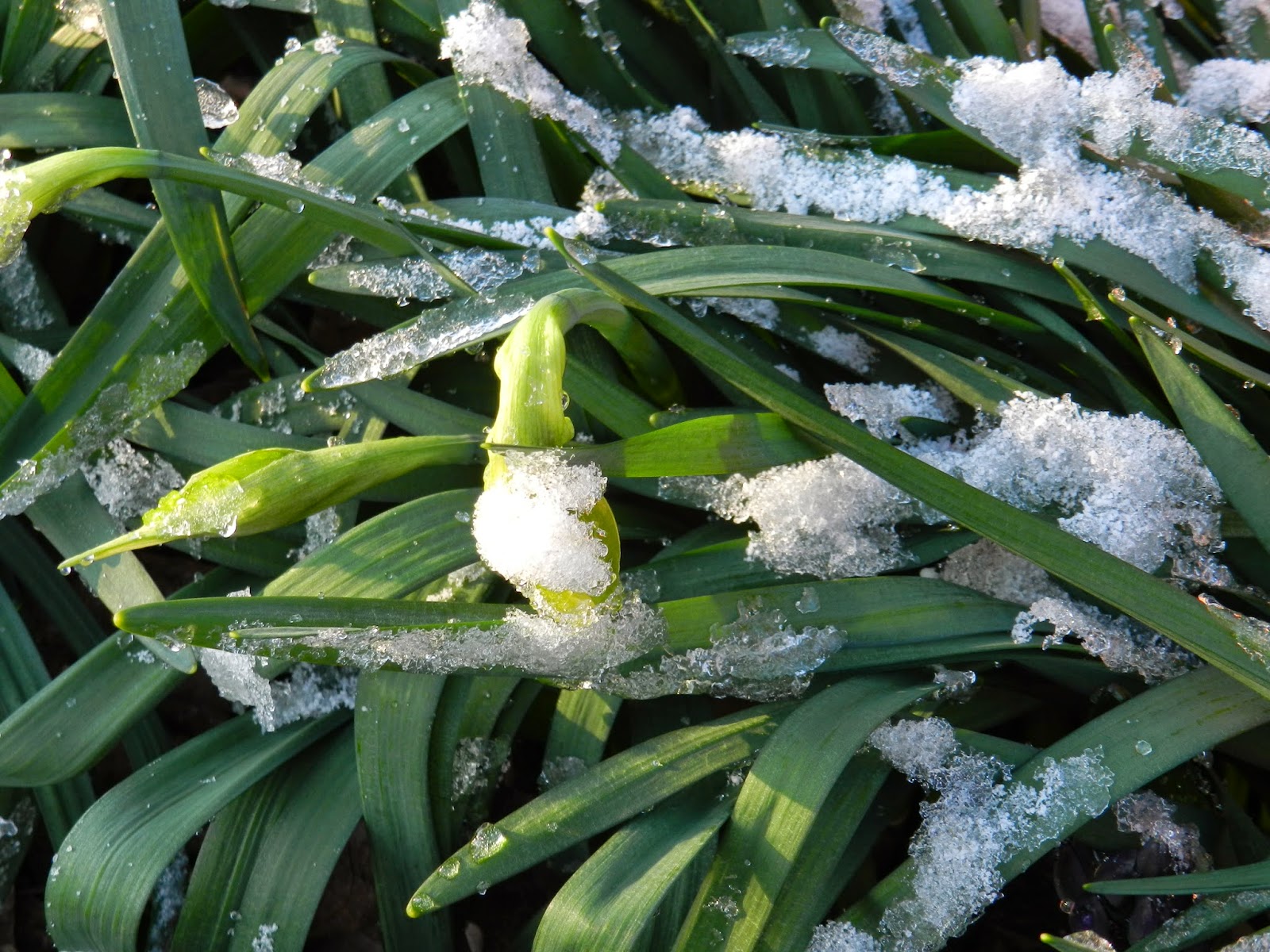 . . . yes, that is snow covering the daffodils this morning!   Our temps dropped 40 degrees in twenty-four hours, and the steady rain yesterday turned into snow before midnight.  These white double daffs were just about to open, but I think they might decide to wait awhile now. 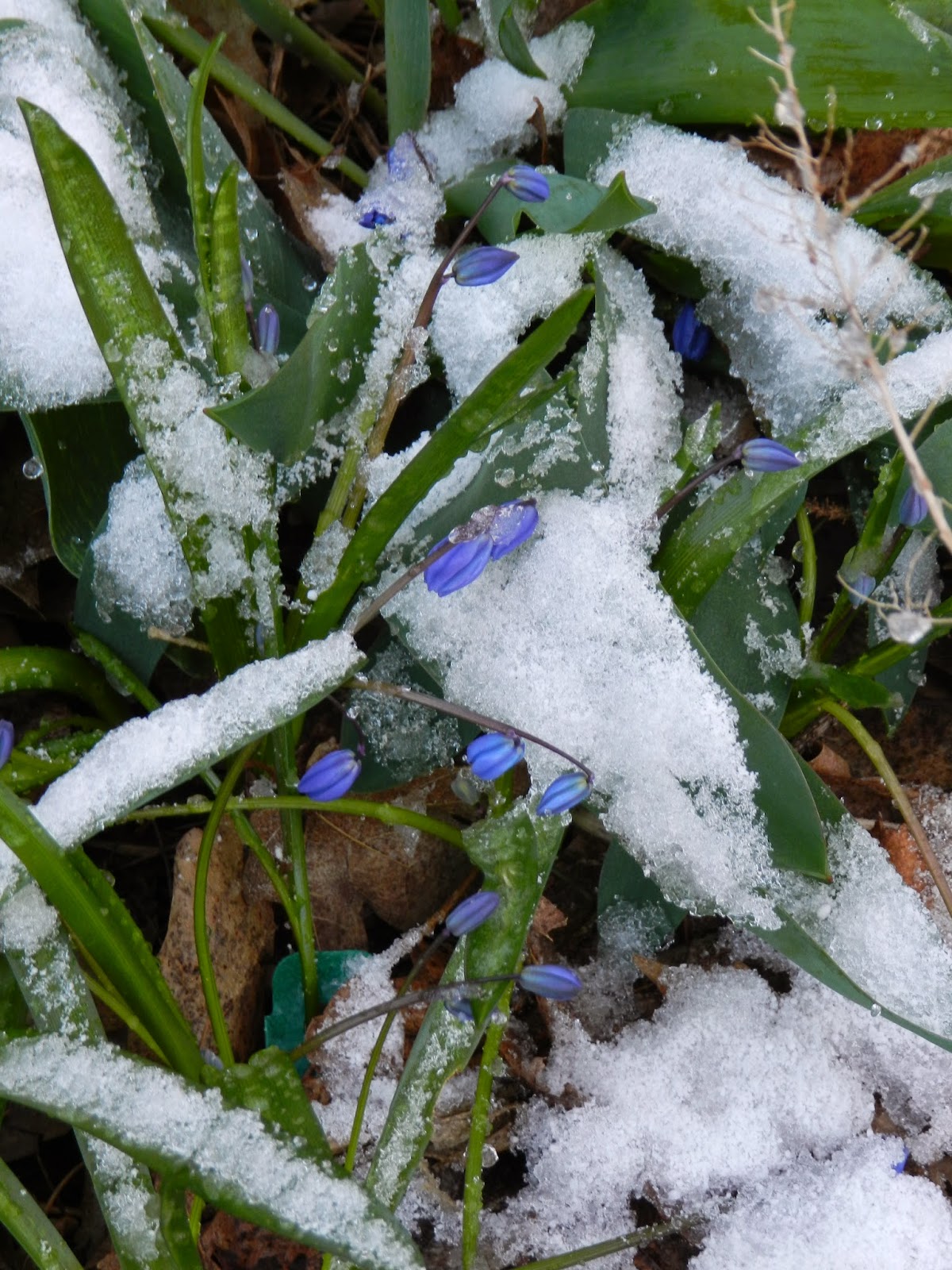 I didn't get a good photo of the pretty little scilla dotting the shade garden yesterday, but today they are closed up, shivering in the cold.

I certainly hope Mother Nature is finished playing her cruel tricks--it's been 24 weeks since our first snowfall, and I think that's quite enough, thank you very much.  Bring back spring!!

Garden Bloggers' Bloom Day is brought to you each month by the indomitable Carol of May Dreams Gardens.
Posted by Rose at 8:58 AM 31 comments:

After months of trying to find some time to get away, I finally was able to visit my daughter near Dallas last week.  I knew it wasn't the best time for her, though, as she had a busy schedule at work, but I don't mind entertaining myself during the day, especially when I could enjoy soaking up some warm Texas sunshine.  It was my first visit to her new house, and I was eager to see it, but I was also excited because she had asked me to help with some landscaping.  Now none of my children have the least bit of interest in gardening, so when one of them asks for advice on anything garden-related, I am ready to help with anything they ask!

Armed with a magazine photo and an article on design tips for front gardens, I arrived ready to get to work.  But my vision of coming up with a plan and implementing it over several trips to her home changed drastically once I saw her home in person.  Although her house is beautiful and big, the yard is tiny, typical of most of the suburban subdivisions I saw.  The house is about 15 years old which means there are already established plantings, so what my daughter really wanted was not coming up with a new landscape design, but rather revamping what was already there. Instead of being a designer, I wound up being a plant detective instead.

The back yard is dominated by a swimming pool, with a few shrubs in one corner next to the house.  What little grass there is needs to stay as a relief area for her three dogs.

The only concern Daughter had about this back area was a large tree planted next to the pool. She and her husband complained that it dropped leaves and debris into the pool, and they intended to cut it down.  I hate the thought of cutting down any tree, so I took a close look at it to try to identify it. 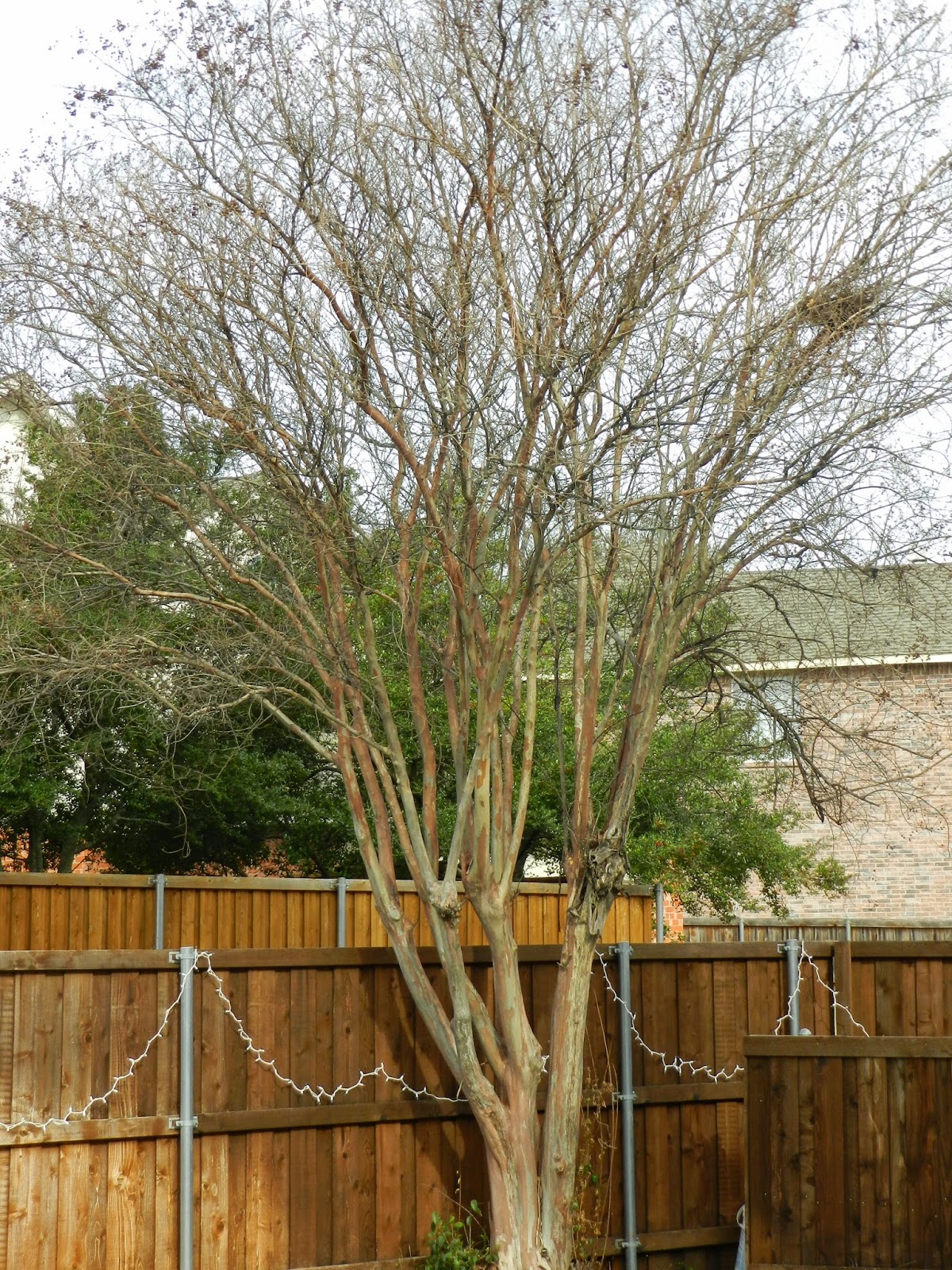 Now my Southern friends will probably be chuckling at my ignorance, but I'm not very good when it comes to identifying trees, other than the common ones, and this was a tree I wasn't familiar with at all. 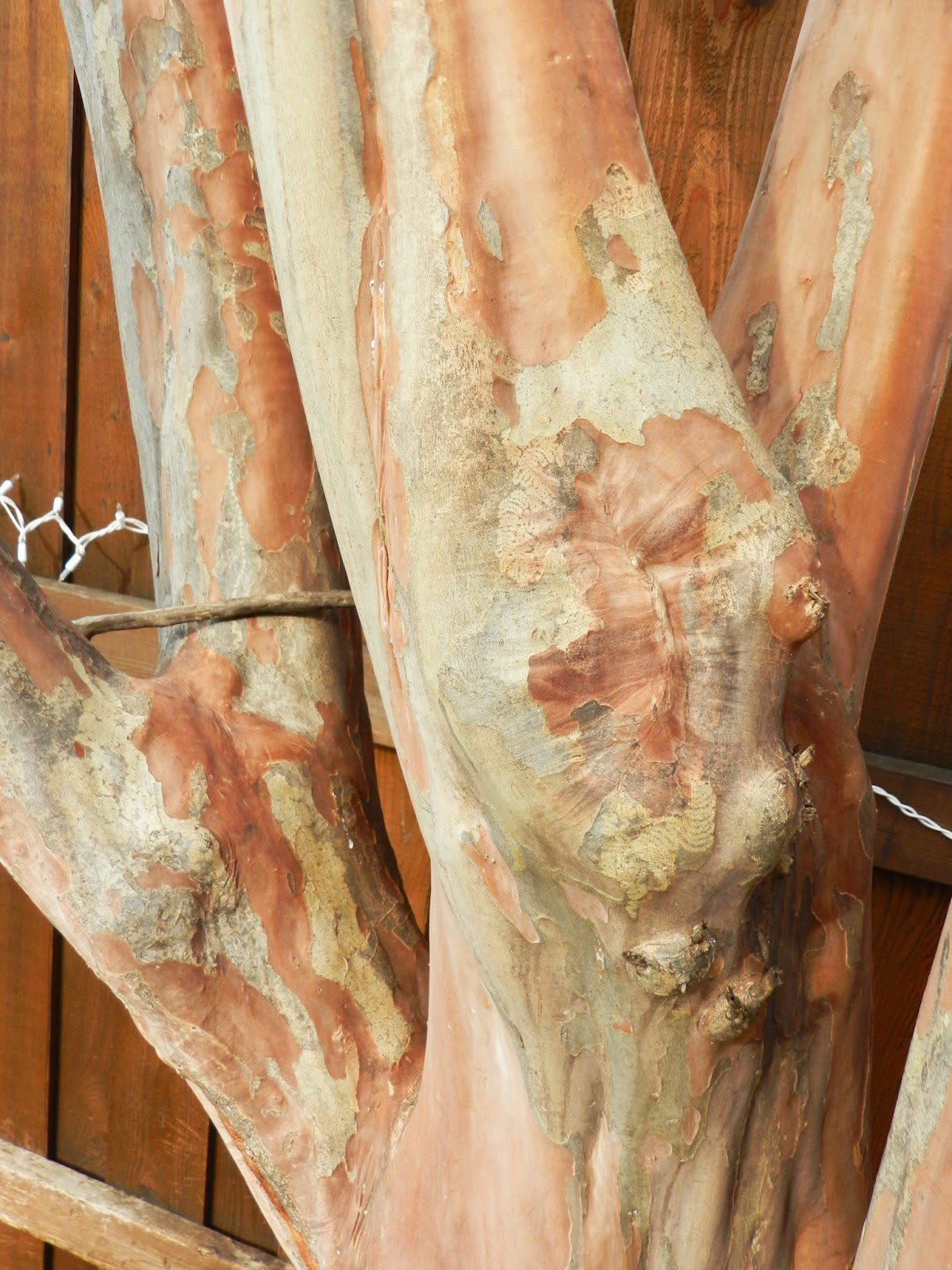 The bark was certainly intriguing.  Later, as I explored the front yard, I discovered two similar, but shorter trees on either side of the front foundation and noticed nearly every yard had at least one, if not more, of the same trees.  A yard crew was cleaning up next door, so I approached one of the workers to see if he could help me identify it.  I wasn't sure if he spoke English, but he adamantly replied "Yes!" when I asked.  Unfortunately, when I asked him the name of the trees in my daughter's yard, he also replied "Yes."  I was pretty sure this wasn't a "Yes tree," so I thanked him and gave up:)  Later research on the internet finally gave me the answer--it's a crape myrtle!  Duh...I've always admired these trees on Southern bloggers' posts, but I'd never seen one when it wasn't in bloom.  When I pulled up images of it in bloom, Daughter and Son-in-law immediately agreed this tree was going to stay put, and they would put up with a few fallen leaves in their pool. 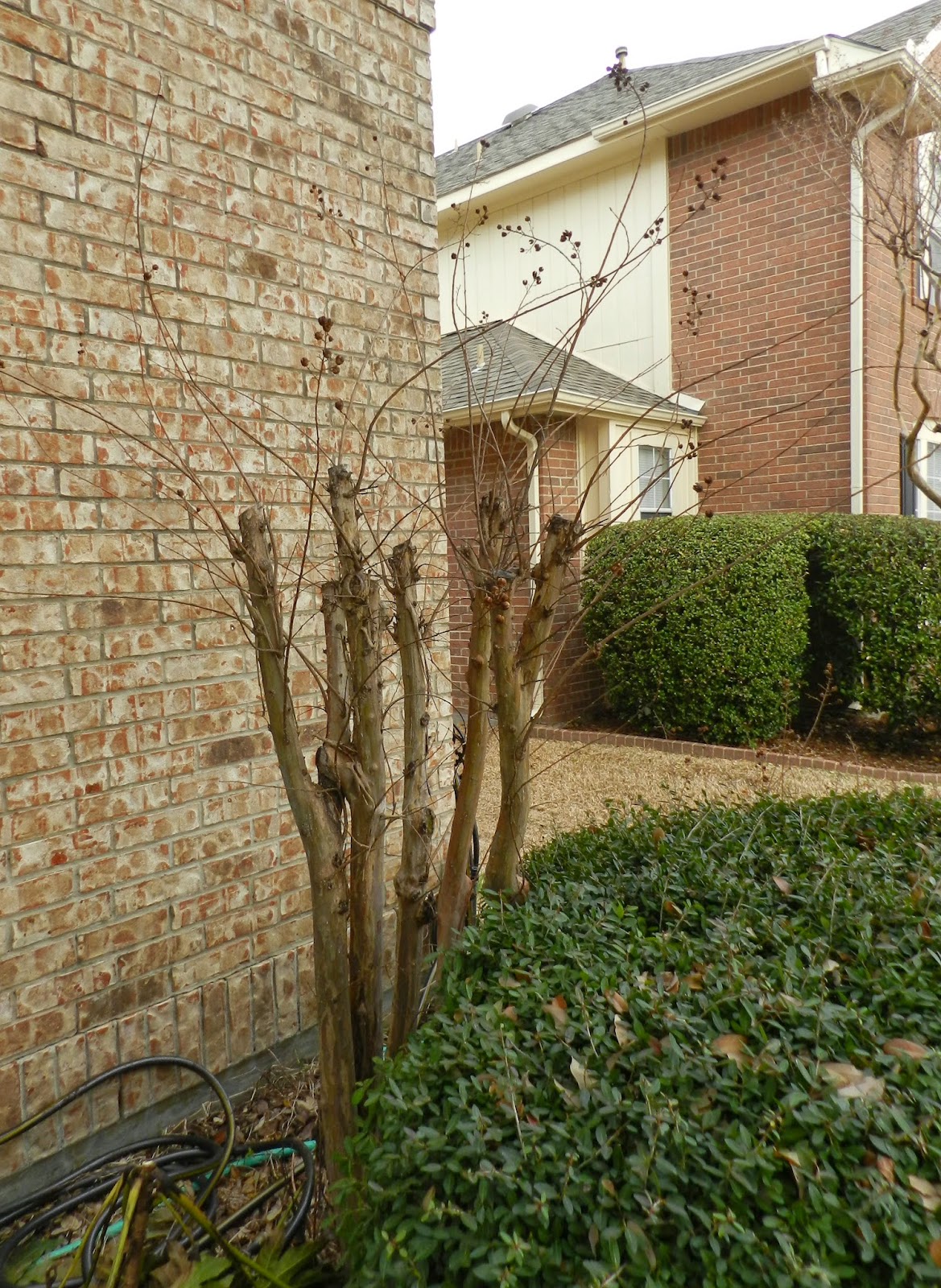 The two crape myrtles (Crape or crepe?? I found both spellings used in articles)  in front of her house had been severely pruned, in what some Southern garden writers call "crape murder."  It may not be the proper way to prune these trees, but it certainly is common, as I noticed similar stubby trees all around the neighborhood.

In front of her house, two narrow areas on either side of her front door had already been planted with shrubs and small trees. Daughter wanted only to add some flowers, not expand the area, and with her busy schedule, everything had to be low maintenance. 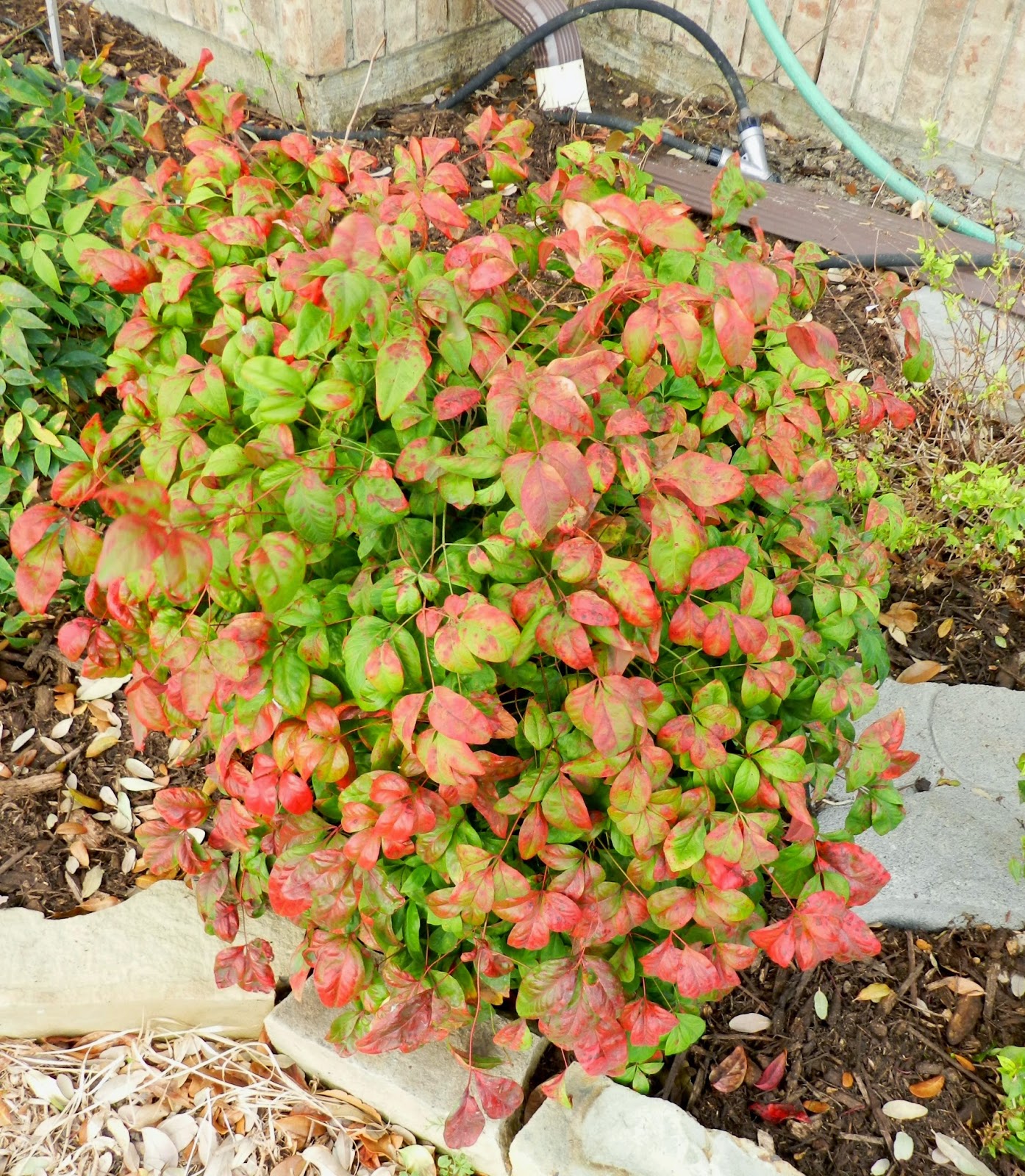 I offered to trim back all the shrubs, but I soon realized that first I needed to know what they were.  I identified the lovely Japanese maples she had (no, she had no idea what they were) and pointed out the boxwoods and a hydrangea.  But coming from a zone 5b garden to zone 8, I didn't recognize many of the other shrubs.  Thank goodness for the internet!  It didn't take long to identify this colorful foliage as a Nandina. 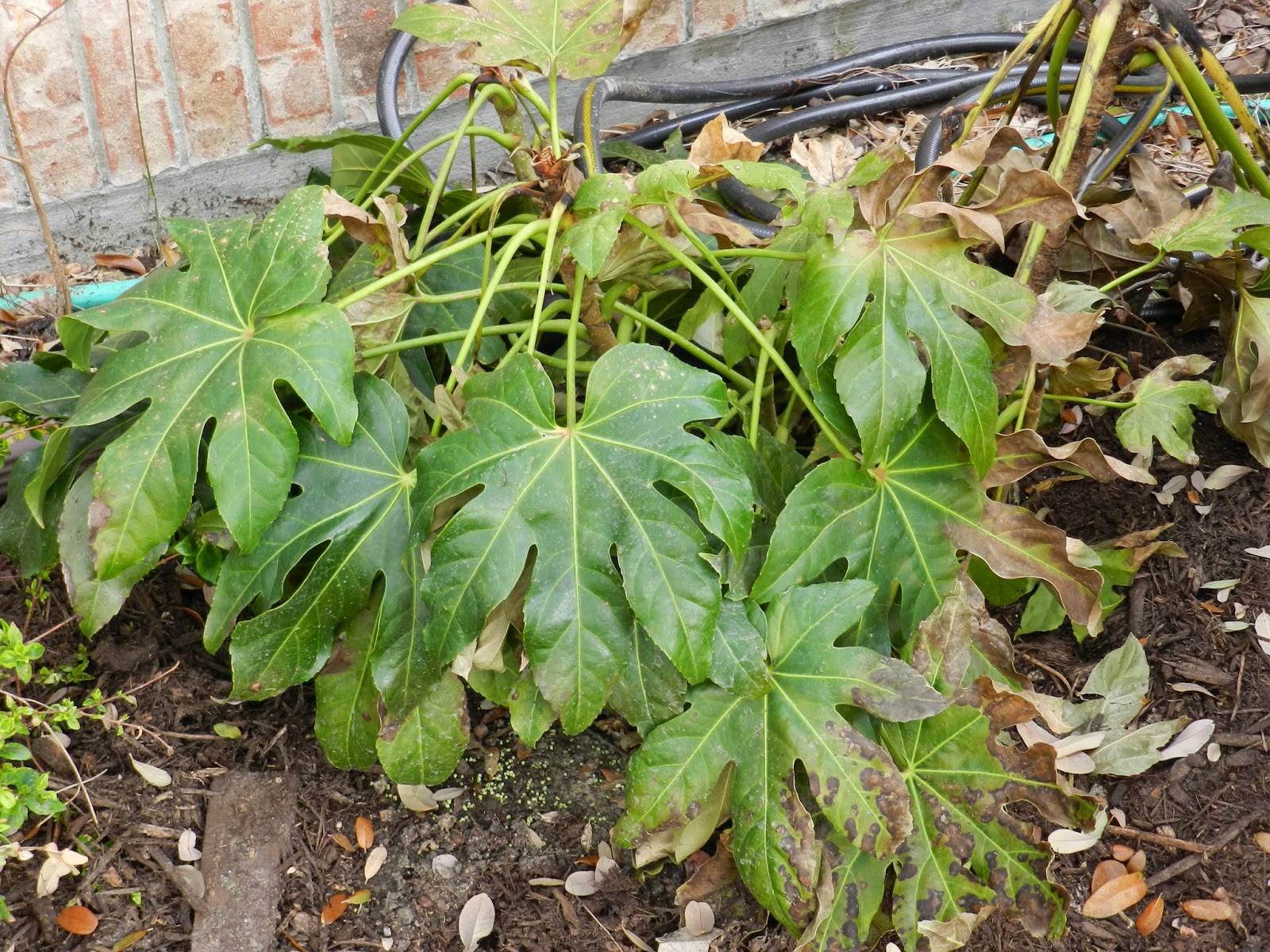 This one wasn't as easy, though.  It obviously needed some type of cutting back, but I wasn't going to touch it until I knew what it was. 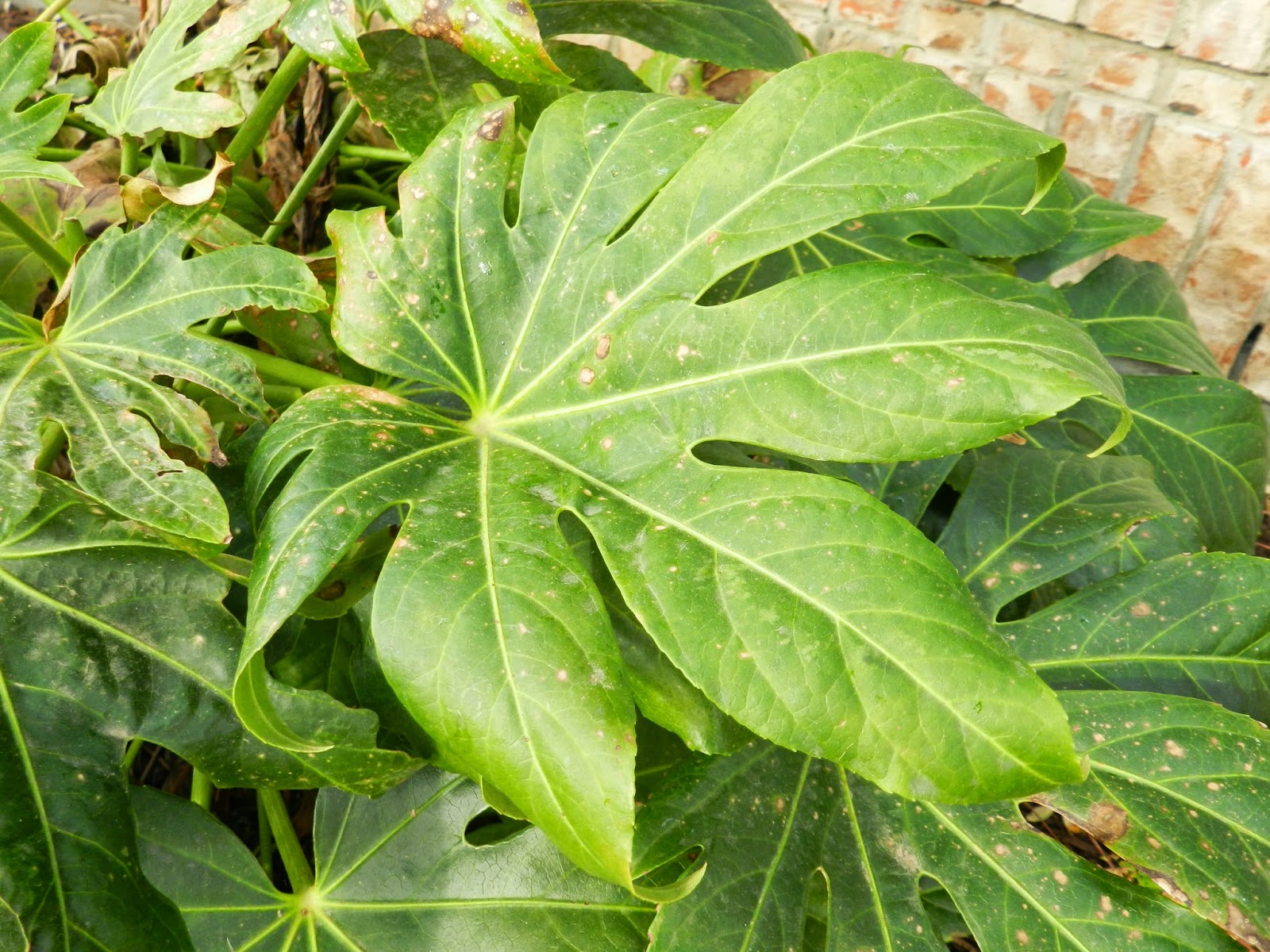 You would think with such distinctive large leaves, it would be easy to find.  But many minutes spent surfing the internet brought up no conclusive answers. 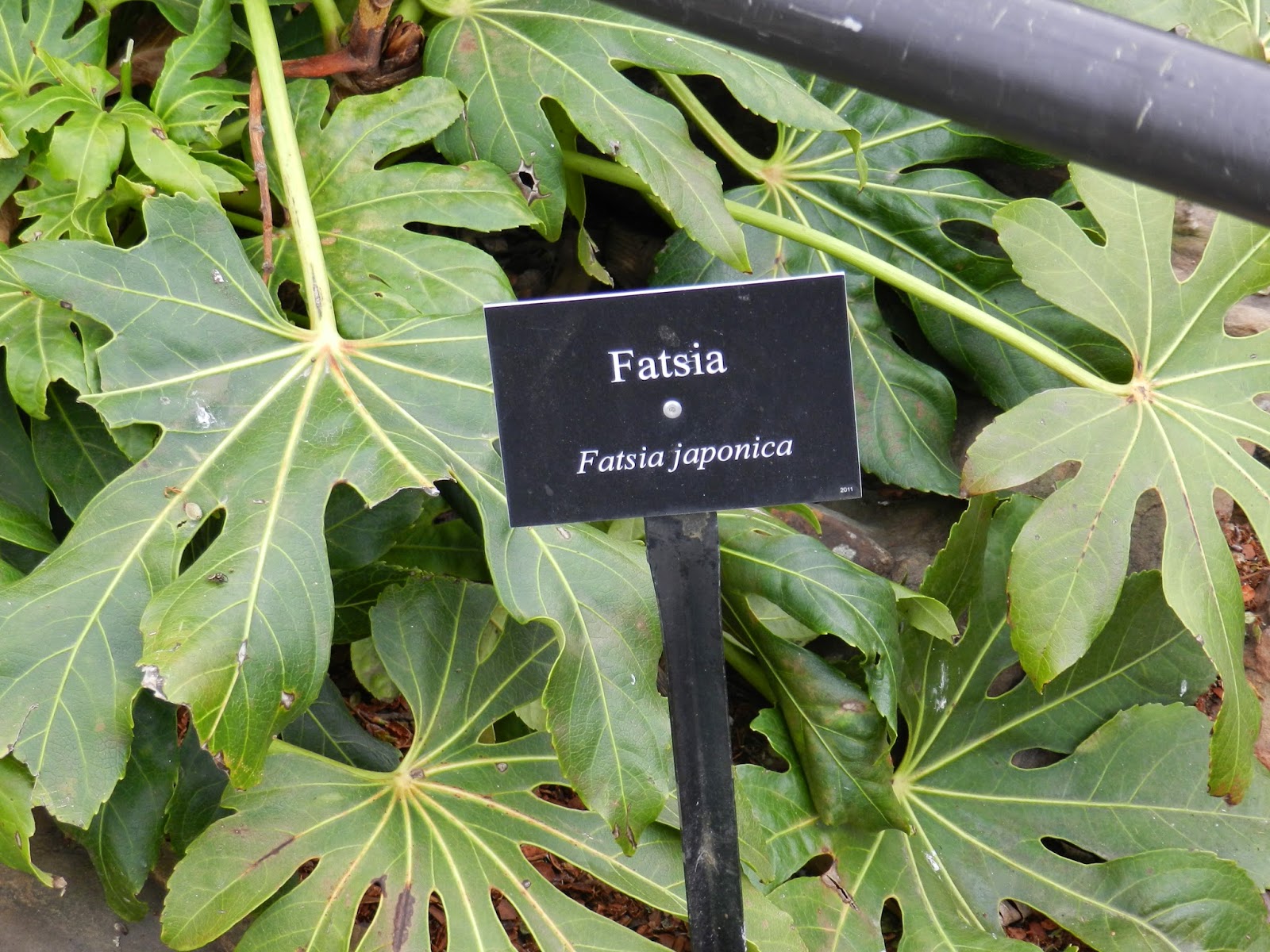 It wasn't until later when I visited the Dallas Arboretum that I had my answer--Fatsia japonica.  Fatsia is hardy only to zone 8, so it's no wonder I wasn't familiar with this plant.  I was glad to see the specimens at the Arboretum were also in the disheveled state my daughter's were; hopefully, with the cutting back of dead leaves and pruning the stems, her plants will look much better soon. 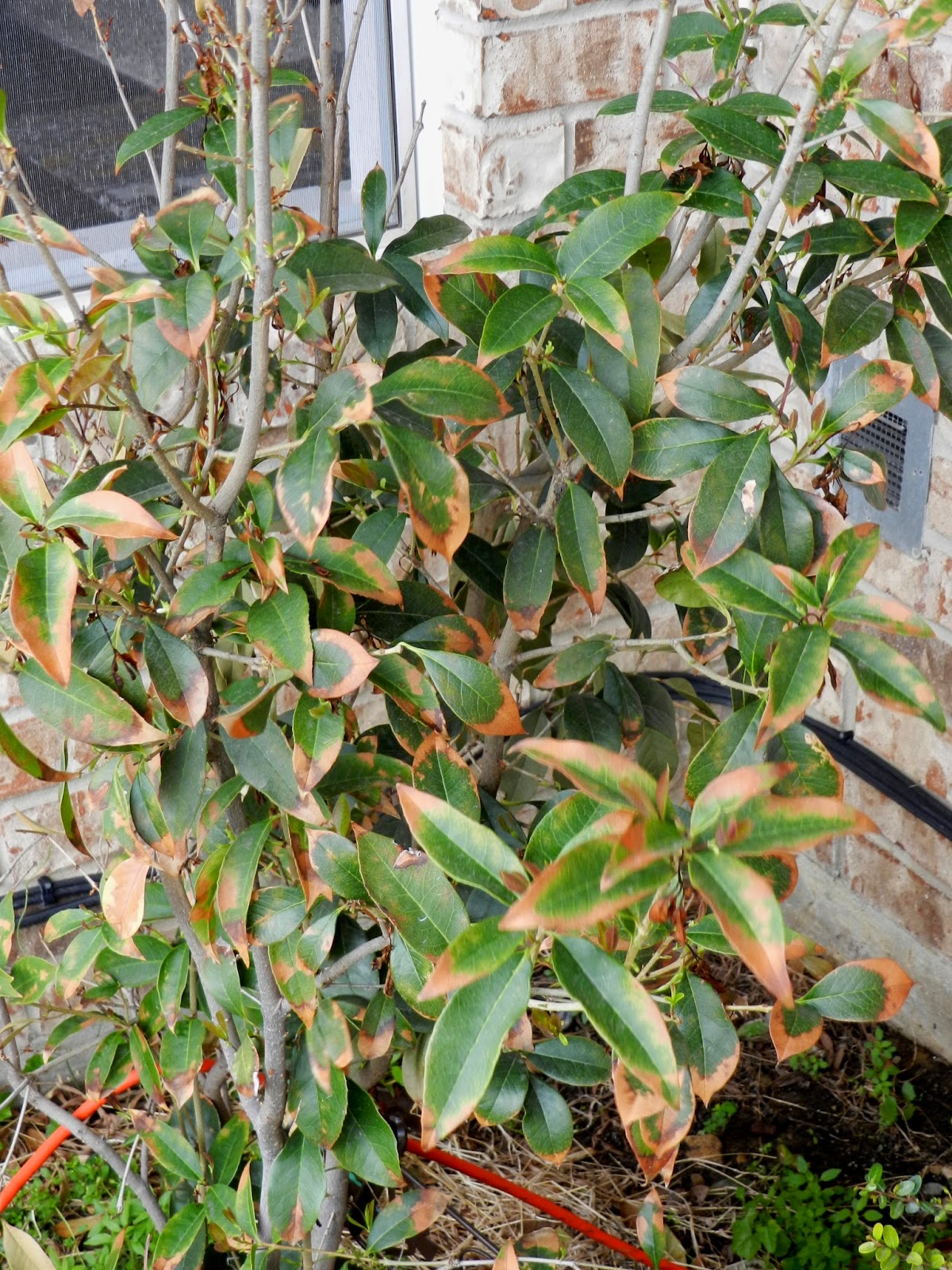 Even though I was eventually able to identify most of the plants for my daughter, there were a few I was still mystified by.  This plant in a small area in the back yard looks like it needs some attention, but I have no idea what it is. 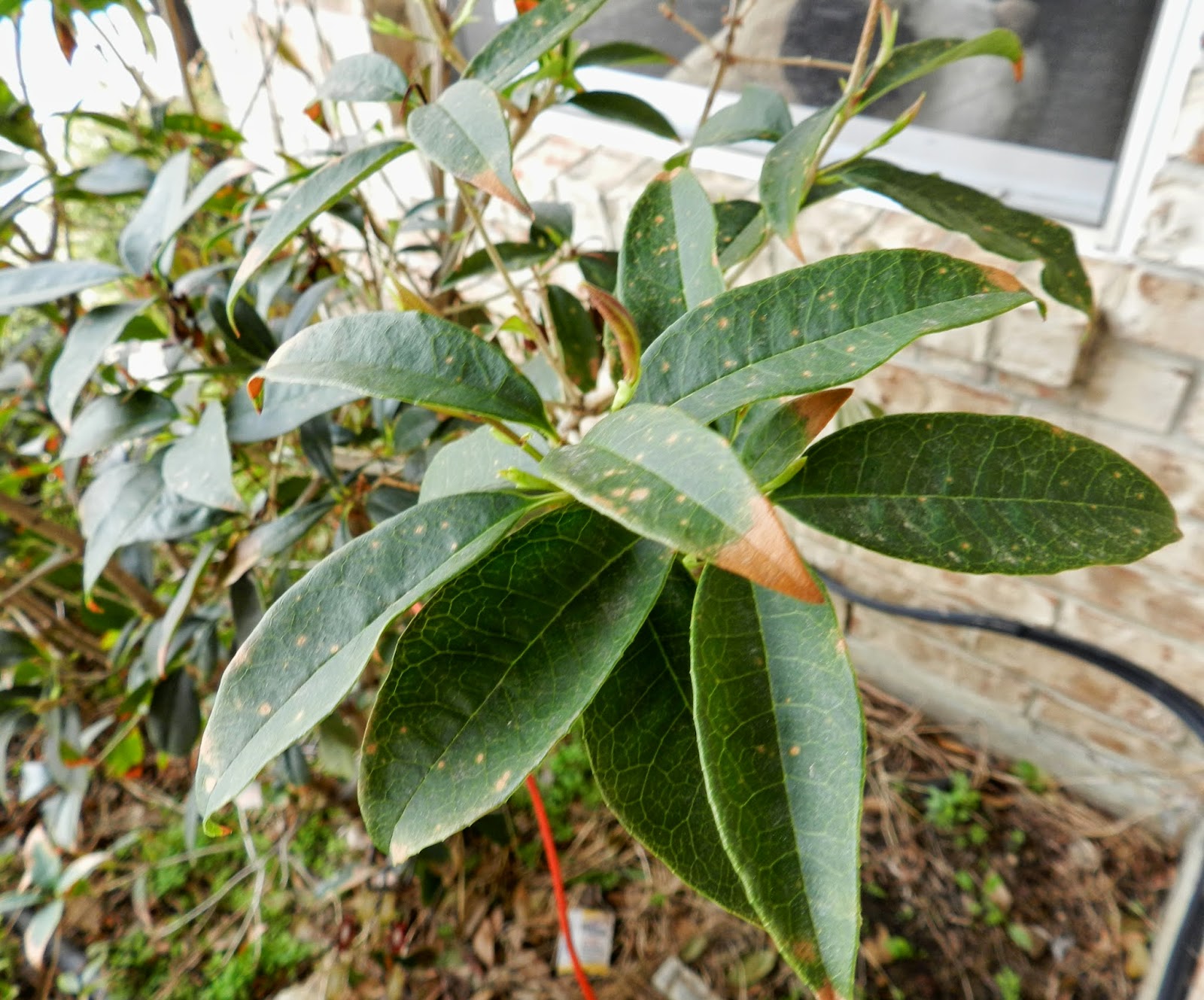 Here's a close-up of its leaves--any ideas??  While shopping at a garden center for some annuals, I noticed some Indian Hawthorn that looked very similar.  After a little research, I learned that it's hardy to zone 7 and produces pink or white blooms in the spring.  Perhaps once this blooms, it will be easier to identify. 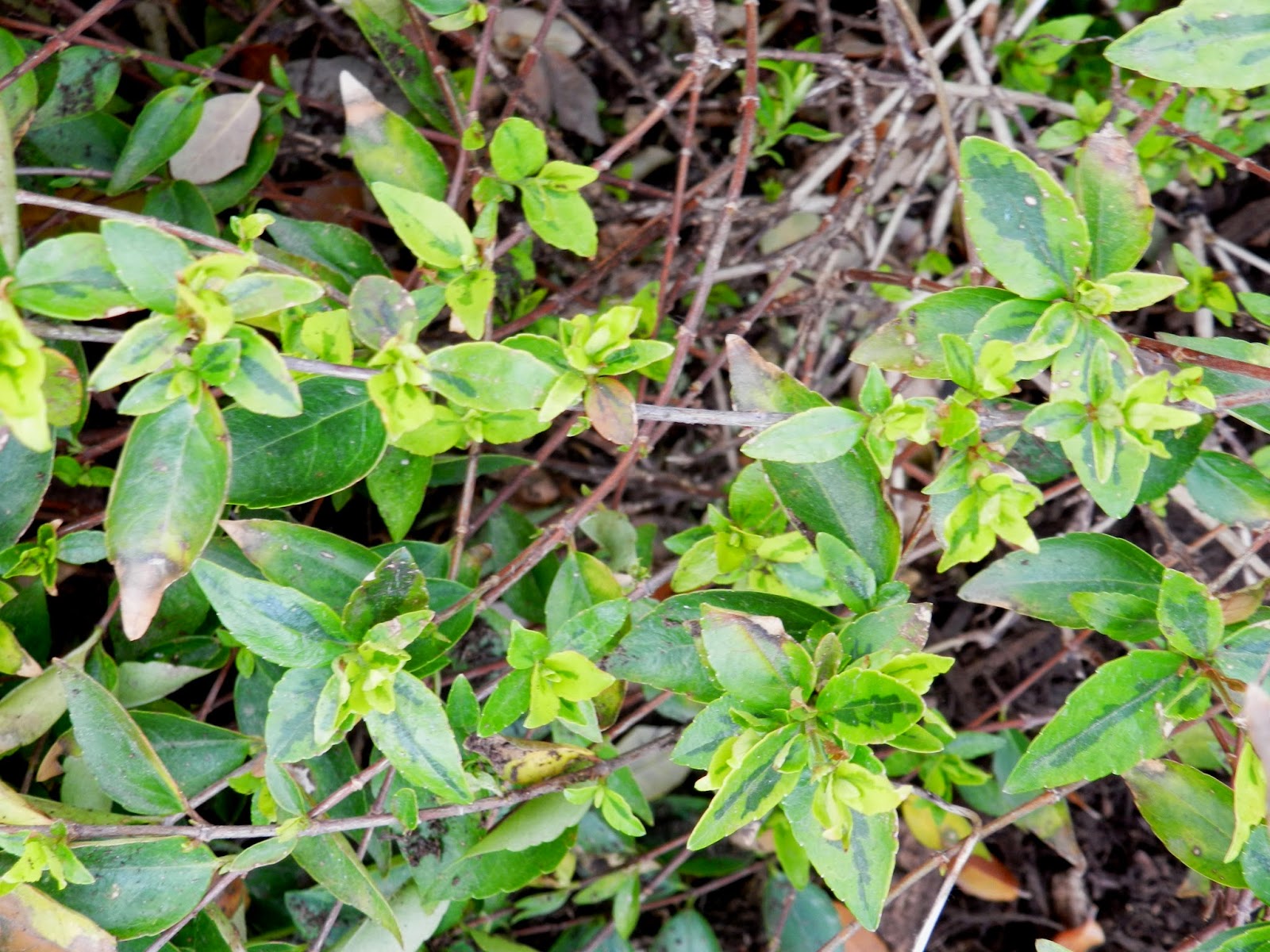 Another mystery for me in the front planting--not a great photo, but any ideas on this one?  I also noticed something similar at the nursery and thought it might be an Abelia, but I really have no idea.  Again, once it blooms, it should be easier to identify.

If any of you, dear readers, can identify either of these two shrubs, I would greatly appreciate it.  Although I doubt Daughter will remember many of the plants I identified for her, I'm glad to know myself what she has so that I can answer any questions she might have about them later.  After cleaning up her small planting beds, we added a few colorful annuals and two azaleas that she picked out and mulched everything well.  It wasn't the big design job I had envisioned, but she was happy. 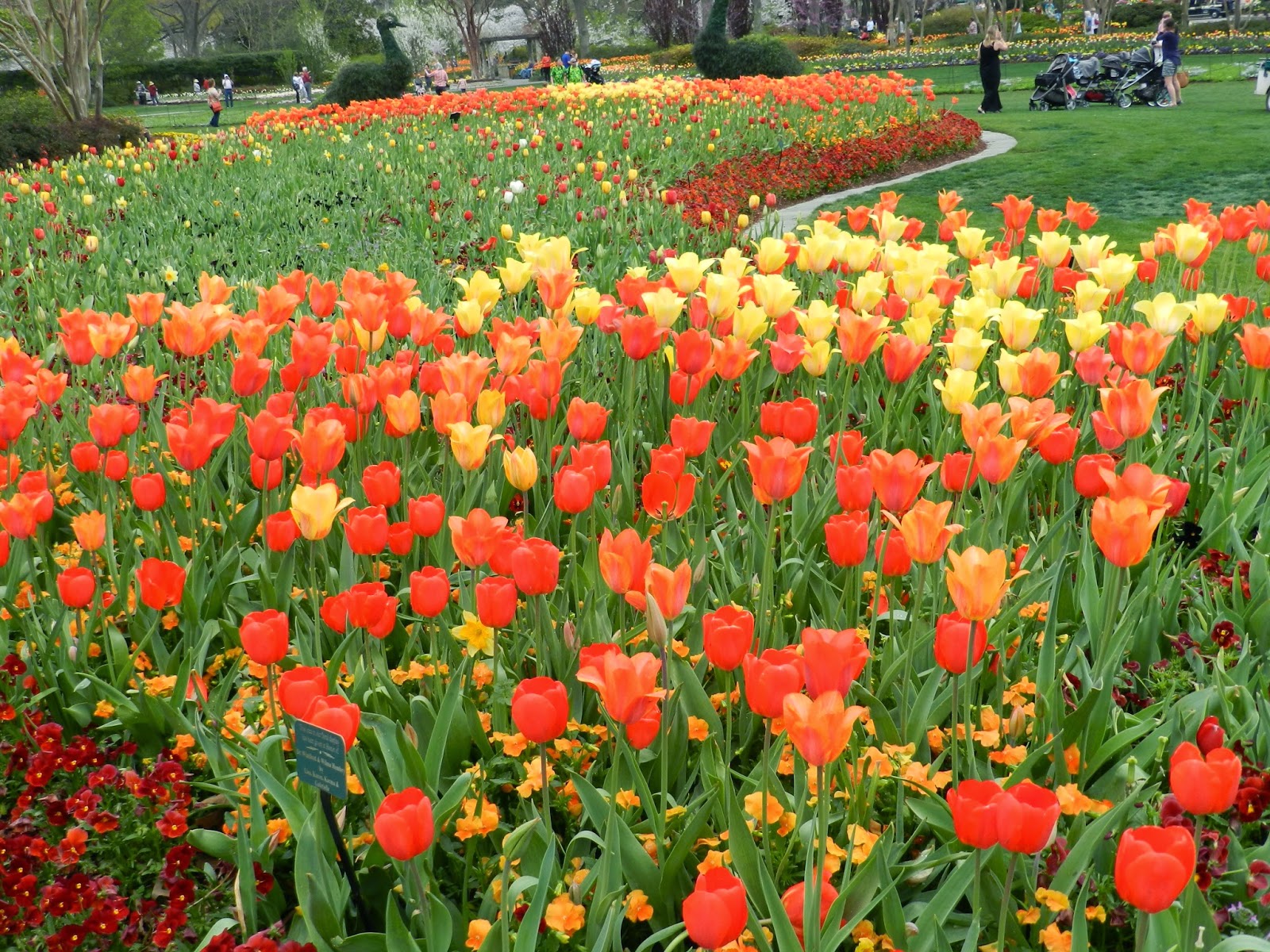 My visit wasn't all work, certainly--I had plenty of time to relax, including a visit to the Dallas Arboretum one day, just in time for the "Dallas Blooms"  celebration. No need to be a plant detective here--this tulipaholic was in a state of bliss surrounded by all these spring beauties!
Posted by Rose at 5:13 PM 18 comments: