Is it Spring Yet?? March GBBD

Goodness, it's been awhile since I have participated in Garden Bloggers' Bloom Day.  But I haven't had much to show off the past few months.  There have been no forced bulbs indoors to brighten up a winter's day--I never did find those amaryllis bulbs I stored away last fall; they will probably turn up in July:)  And I really didn't think anyone would want to see the straggly plants I potted up to over-winter and then promptly neglected.  So I opted out of the past few Bloom Days, waiting for the first spring blooms to appear so that I had something worthwhile to share.

It has been such a weird winter weather-wise.  We haven't had enough snow all season to do much more than cover the ground for a few days before it melted, and I don't think the temperatures ever dropped below 0, both very unusual for Illinois.  February was the warmest February on record for our area, and I fully expected to have an early spring.  We spent last week visiting the two youngest grandchildren in Texas, where the temps were in the 70's nearly every day, so I was expecting to come home to see a garden full of daffodils.  Instead, I found this: 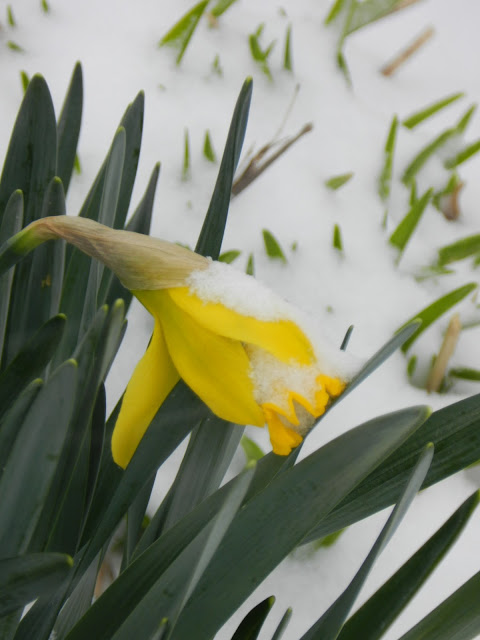 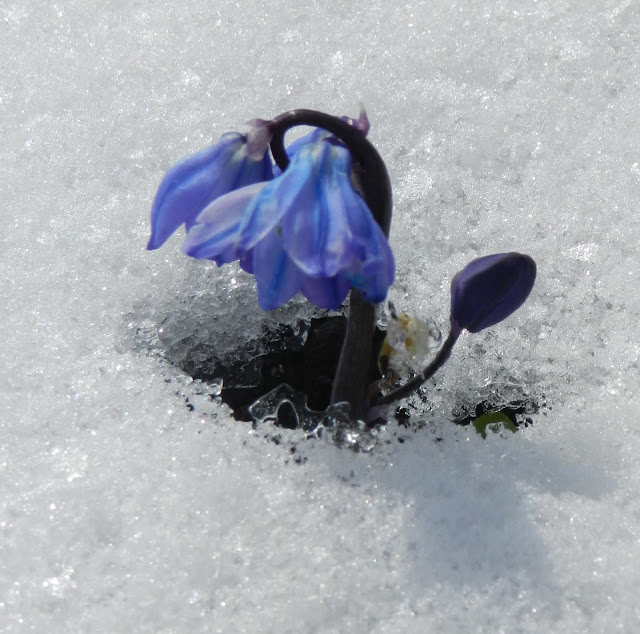 Poor little Scilla and daffodils shivering in the snow.  Once again, winter has returned, though not with the vengeance that has struck the Northeast--again, just enough snow to cover the ground.

I really had high hopes for an early spring, after the early appearance of some blooms in February: 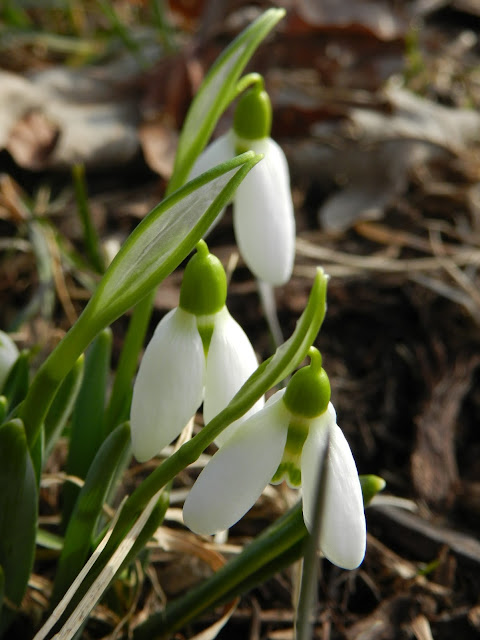 On February 18 the first snowdrops appeared.  They always come as such a surprise to me--I had been looking for signs of them for days with no luck, and then as if by magic, they appeared in full bloom on this February morning. 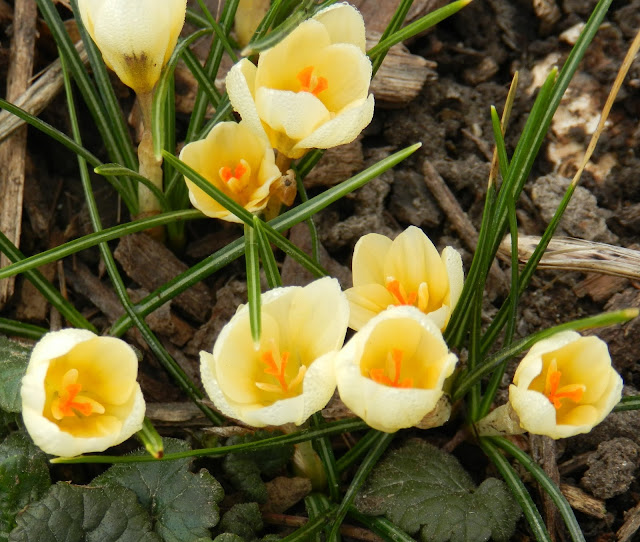 On February 23, the first crocuses opened up,
a new record for the earliest crocuses in my garden, I believe. 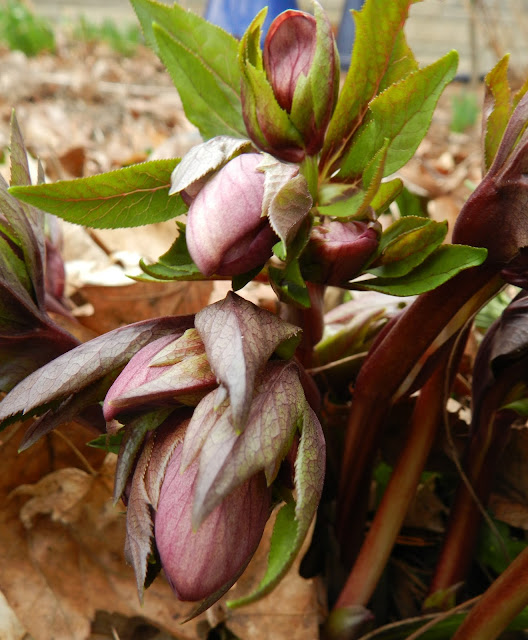 That last week in February was so warm that I spent some time cleaning up in the garden--what a treat to finally be able to work outside!  I was ready to call it a day after a few hours, but I decided to check the shade garden where I found these fat Hellebore buds.  I promptly put on the gardening gloves once again and began snipping away all the old foliage so they could get the attention they deserve.  They're probably blooming by now, but unfortunately, they're covered in snow, so I can't tell. 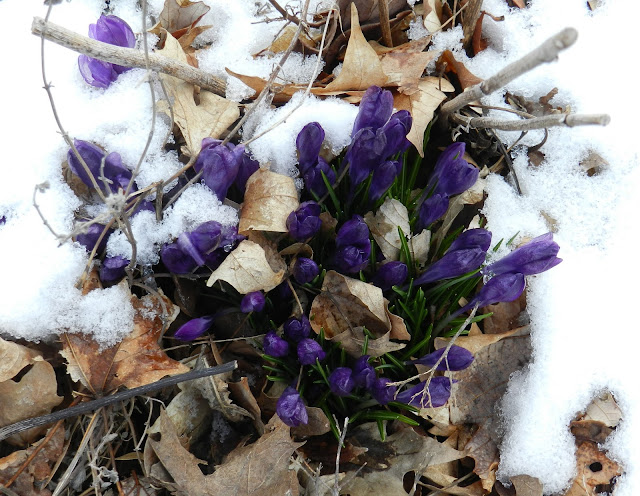 But back to today--instead of all the spring blooms I thought I might have by now, everything is in a holding pattern.  More crocuses have opened up in the past week or two, but for now they are huddled up waiting for the sun and warmer temps. 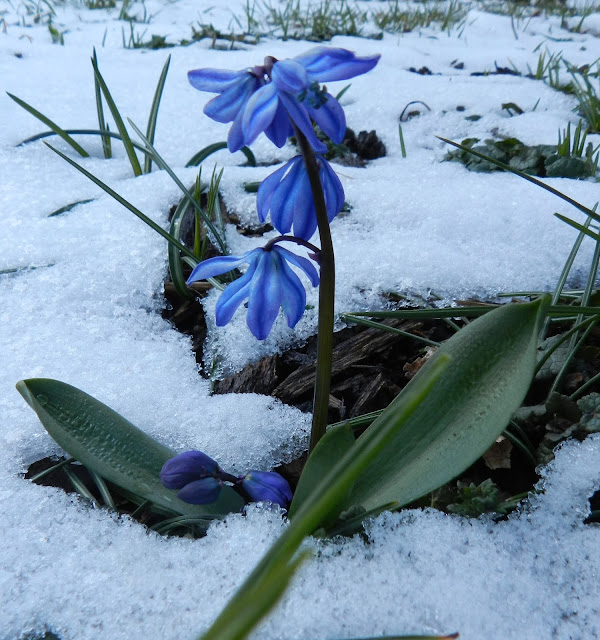 A few Scilla have been brave enough to appear, though most are waiting, too, for the snow to melt. 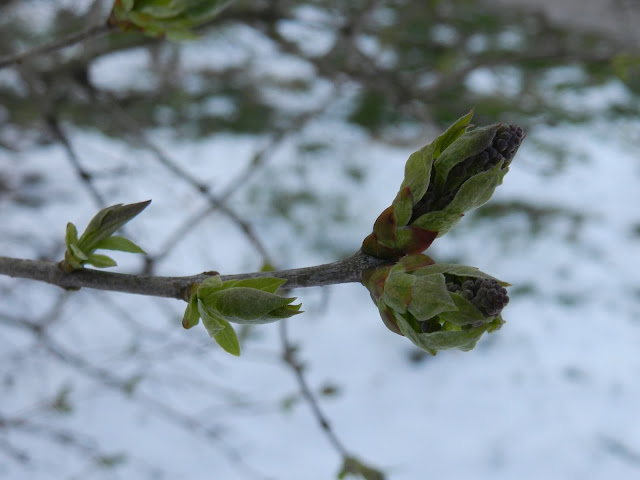 The big old lilac has budded up--the only plant I'm concerned about now.  I'm afraid these early buds may be doomed after this latest cold spell. 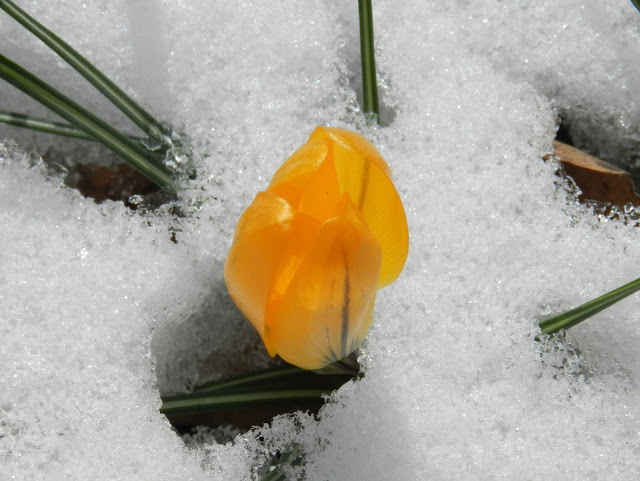 But other than the lilac, I'm not too worried.  Daffodils and tulips are up all over the place, waiting for the right time to bloom.  Spring will arrive whenever it is good and ready.

Thanks to Carol of May Dreams Gardens for hosting another Garden Bloggers' Bloom Day, and congrats on the new book, Carol!