There is a reason they call these the dog days of summer. For the past month, we have been living under a "heat dome" with so much heat and humidity that even my dogs don't want to go outside during the heat of the day.  I'm a wimp when it comes to heat, too, so about the only gardening I've done lately is pick green beans in the early morning or just before dusk and drag around the hoses to keep everything watered. For at least the past two weeks we haven't had more than a drop of rain, so keeping everything alive under the blistering sun has been my main priority. 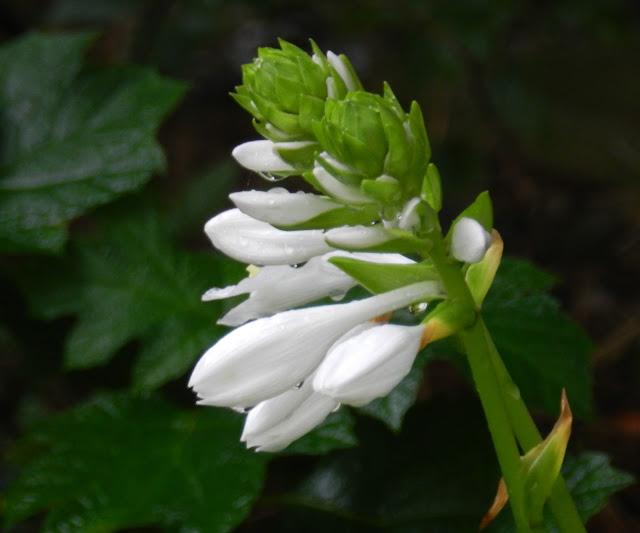 Until today, that is.  The rain started last night, and by early Monday evening we had received almost three inches of welcome rain. My thirsty garden is so happy!  The late-blooming hostas--Hosta plantaginea, I think--are soaking up every drop. 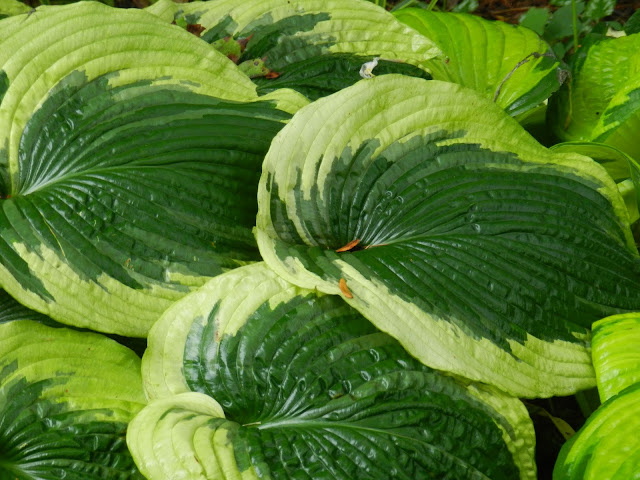 Some of the hostas in the shade garden are beginning to turn a bit brown around the edges, but for the most part, everything is still looking lush and green. 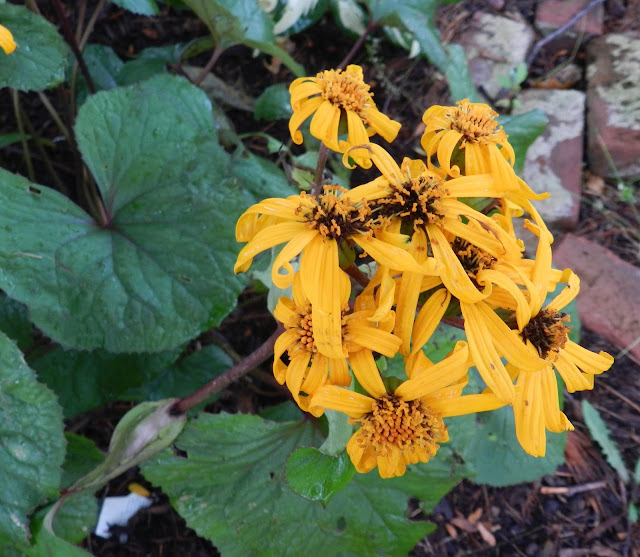 The wild colors of July have pretty much faded away, but there are a few new blooms here and there.  The new Ligularia 'Desdemona' is putting out quite a few blooms in its first year in my garden.  I really think I ought to add an 'Othello' to go with her, don't you? 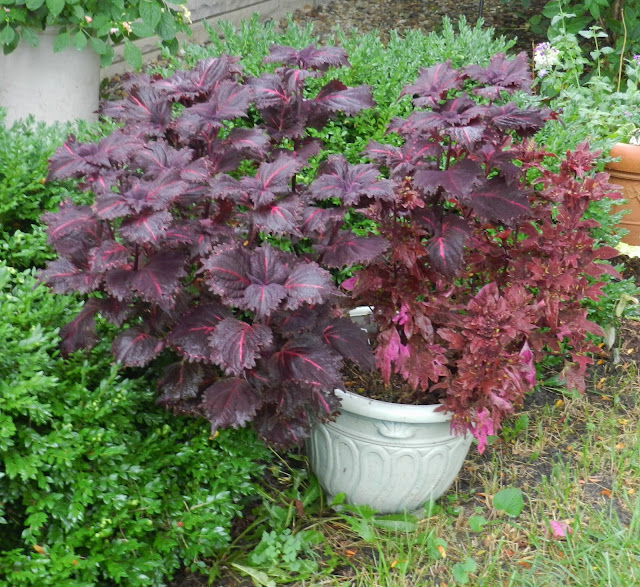 The dark red coleuses I like to put in pots in front of the house are getting taller and taller. 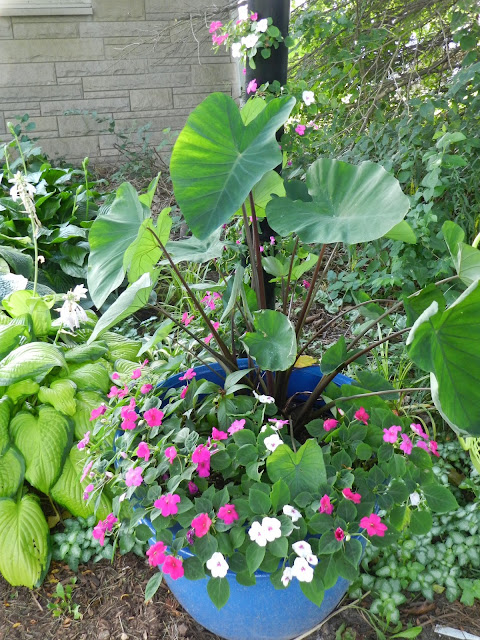 The elephant ears in my new huge pot have done well, too,
in spite of the lack of rain the last few weeks. 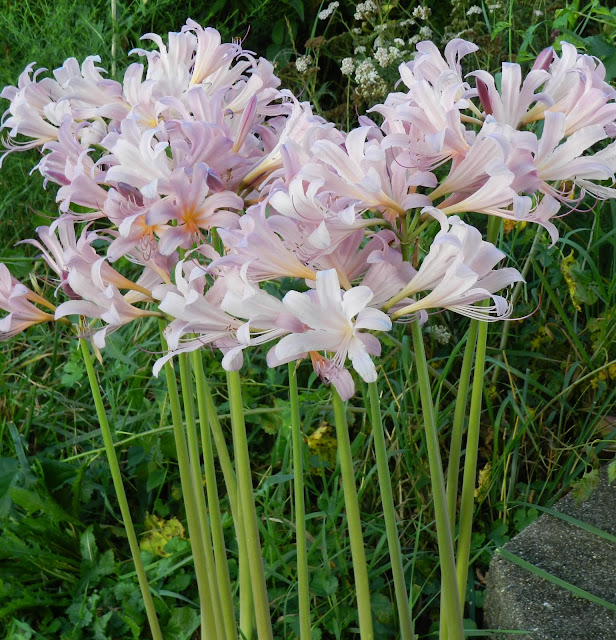 The surprise lilies or naked ladies, whatever term you prefer, are done now, but a week ago they were in all their glory.  I still see many blooming all around town. 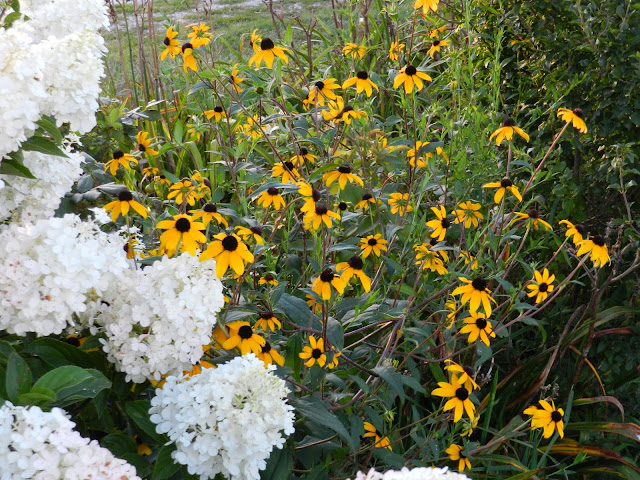 Rudbeckia triloba, or Brown-eyed Susans, are adding some much needed color to the Lily bed.  Even though I thought I had dug most of them out this spring, a couple seedlings managed to hide from the spade. 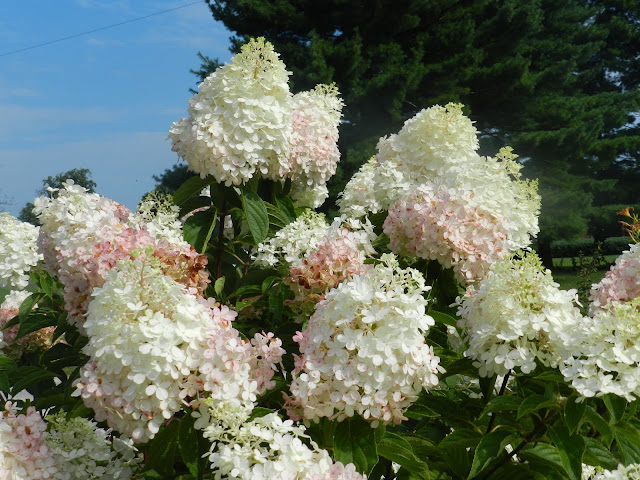 The 'Vanilla Strawberry' Hydrangea has been loaded with blooms this year.  I only wish the pink petals would last a little longer: I took this picture a week ago, and now they're turning more vanilla-chocolate. 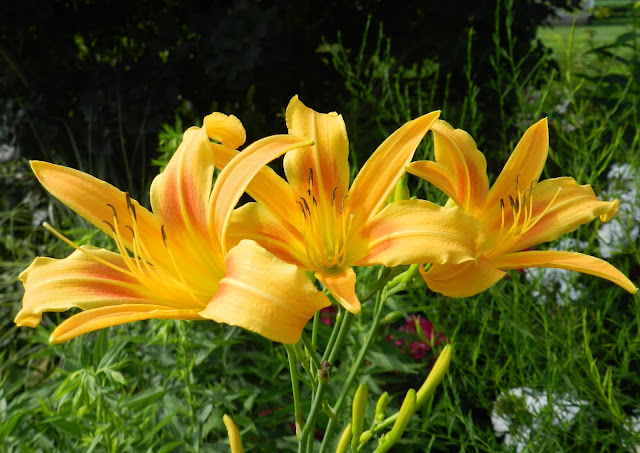 Although the daylilies have been finished for awhile except for a few re-bloomers, this late daylily just began to bloom.  'Autumn Minaret' is a tall lily, a good pairing with 'Challenger,' which is still blooming, too. 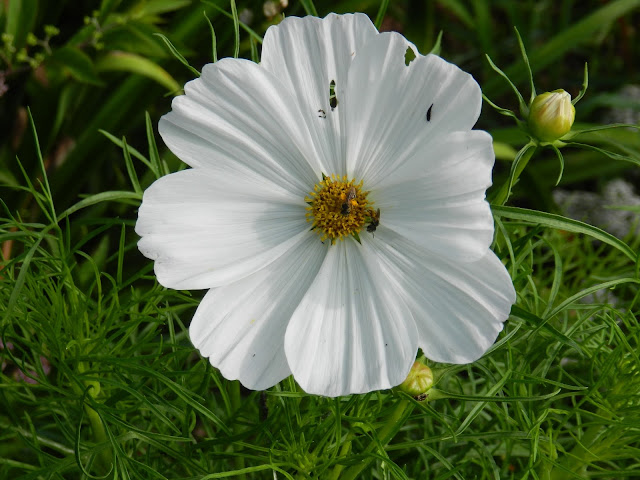 Finally, some of the seeds I direct sowed in late spring are finally starting to bloom.  'Knee High Sonata' Cosmos is just starting.  I've been disappointed, though, that I haven't seen a sign of the taller cosmos I planted. 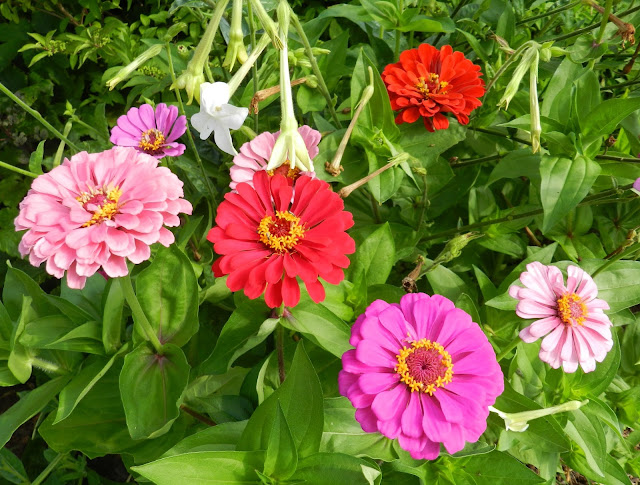 Zinnias are also blooming in several places.  You can't go wrong with these old-fashioned favorites. 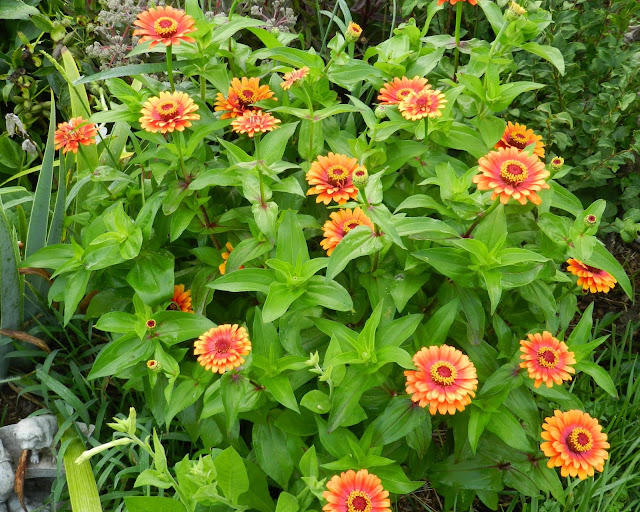 And speaking of zinnias, my very favorite 'Zowie Yellow Flame' has not disappointed me.  I had intended to get a better photo, but the rain kept me from going outside with my camera today.  But I'm sure you'll see more of these next month:) 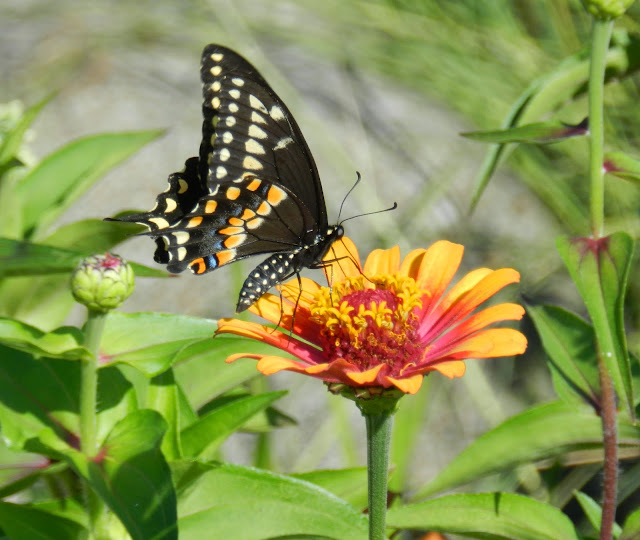 Here's a better photo I took last week while watering at the Nursing Home Garden.  I've raved so much about these 'Zowie's' that I have convinced my cohorts who volunteer with me to plant them here as well.  They really are butterfly magnets! 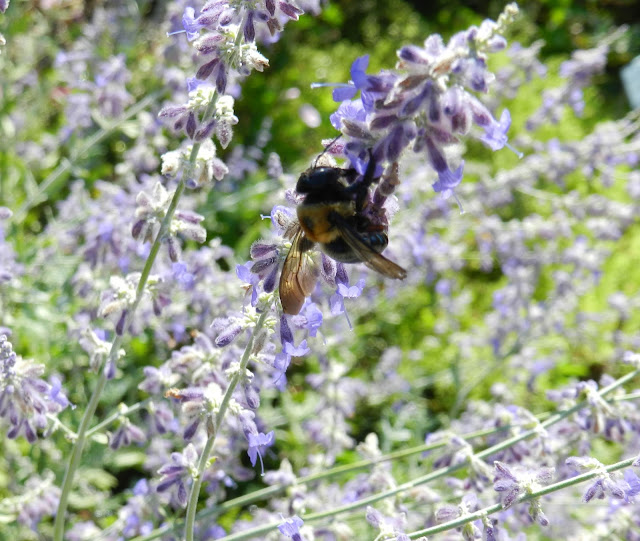 Another photo from the Nursing Home garden could have been taken in my garden as well--the bumblebees love Russian Sage. 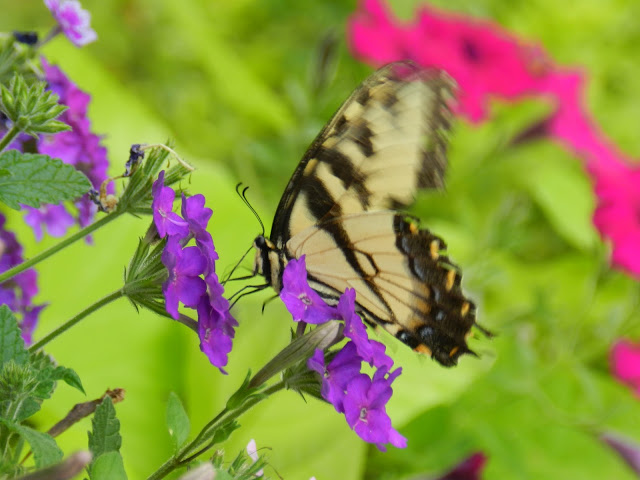 While I haven't been doing much work in my own garden, I have been enjoying watching the visitors the past few weeks.  This Tiger Swallowtail was a blur of fluttering wings as it enjoyed the verbena in a container. 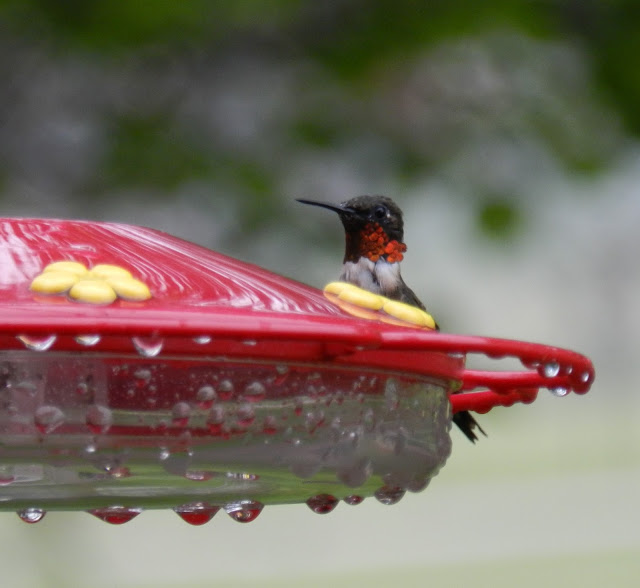 And, of course, my usual visitors as I sit on the front porch.  I could watch them forever as they dance and dive through the air--occasionally buzzing my head as they zoom to the feeder. 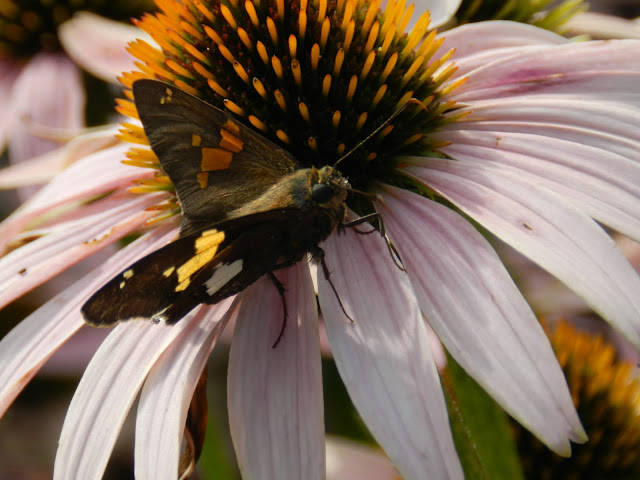 We have had so many moths lately, especially at night, that they're rather annoying.
I thought this daytime visitor was rather pretty, however. 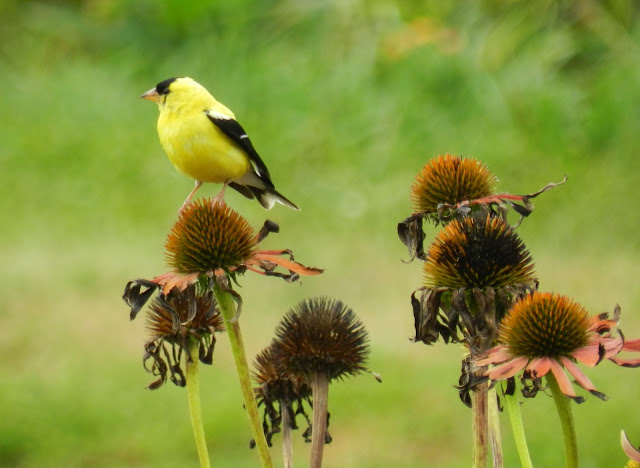 The coneflowers I've pictured for the last month or more are finally fading away.  Just as I was contemplating cutting back some of them the goldfinches arrived. 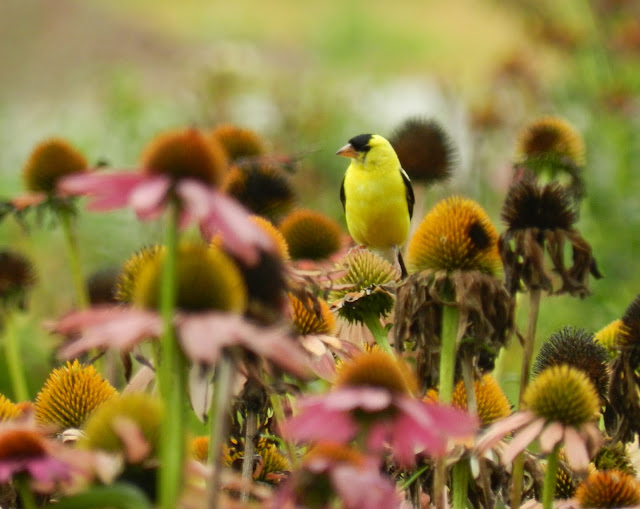 Needless to say, the coneflowers won't be cut down any time soon.

Tomorrow is the first day of school for most children in the area, the symbolic end of summer even though there is still a month or more of summer left.  Soon it will be time to start thinking about fall chores and ordering bulbs for the spring.  For now, though, I am enjoying the last blooms of summer.

Garden Bloggers' Bloom Day is hosted the 15th of every month by Carol of May Dreams Gardens.  Thanks, Carol!
Posted by Rose at 9:49 PM 43 comments: