It's time for another Garden Bloggers' Bloom Day, but I must confess I haven't been in the garden much this past month.  I wish I could say it's because I have been off traveling the world or doing something equally as fun, but no, I have been busy with mundane things like cleaning carpets and other household chores  I've also been chauffeuring grandkids around to their sports practices, because, well, that's what Grandmas do.  But I've also been pretty lazy--by late July, I'm tired of constantly pulling weeds and deadheading and would much rather just sit back and enjoy the garden and think about changes to make next year.  So let's stroll around the garden and see what is blooming--I might find something that surprises me as well as you. 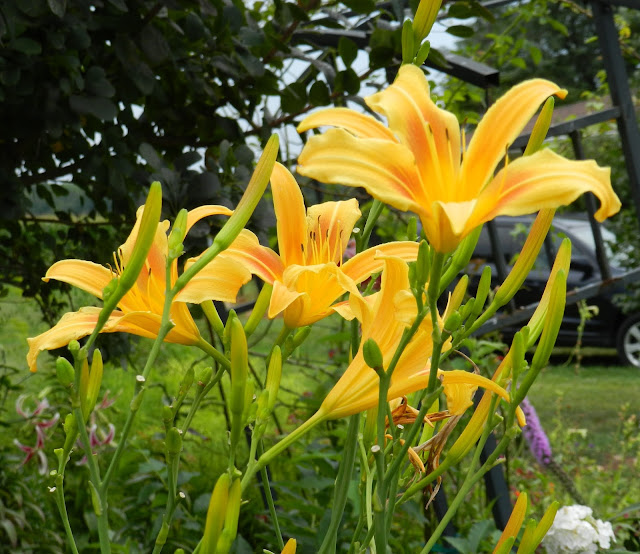 The daylilies of June and July are pretty much done blooming for the year, but there are two later lilies in full bloom now, including 'Autumn Minaret' above. 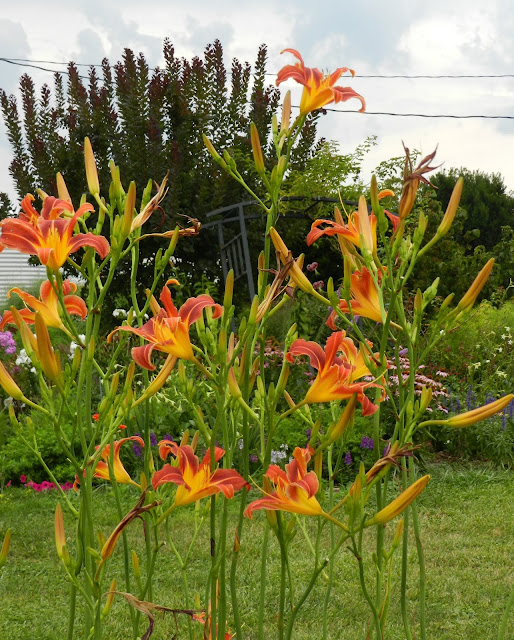 'Challenger,' an heirloom lily, is the other one.  These are both tall daylilies, which are nice because they draw the eye upward, away from the dying foliage of the rest of the daylilies. 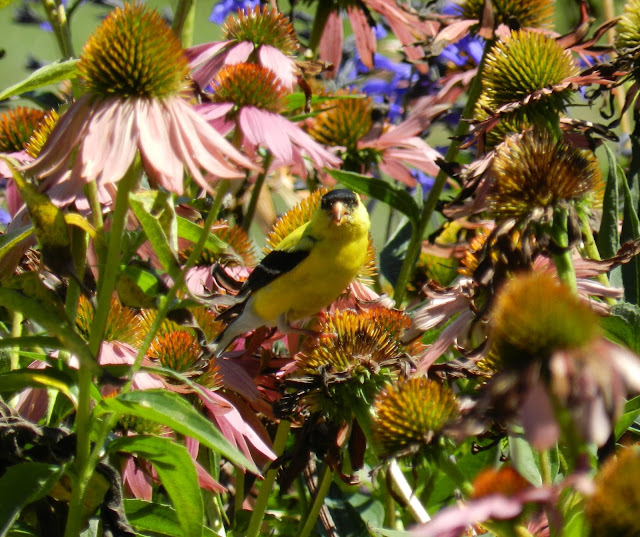 The coneflowers are still blooming, though many are looking pretty tattered by now.  I cut back some of the ones that look especially bad, but I leave most of them up for my pretty visitors above.  The goldfinches love the seedheads on coneflowers and are busy feeding on them all through the day. 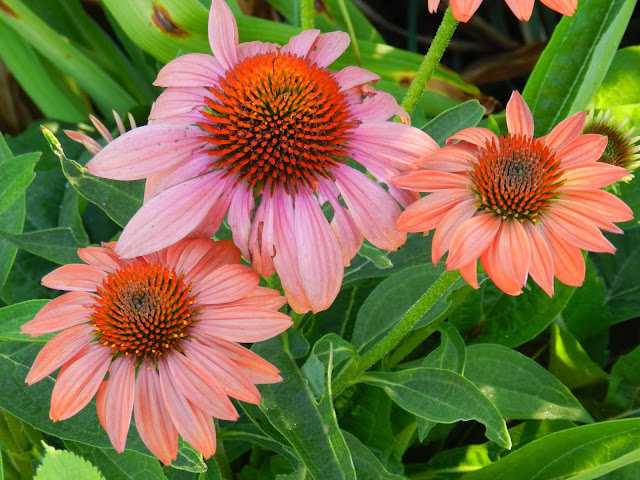 While I have the native Echinacea purpurea throughout all my flowerbeds, I do have two hybrids, both 'Cheyenne Spirit.'  This is one hybrid that has done well for me, and the cool thing about this plant is that it can have different colored blooms on the same plant.  The one above had orange blooms when I bought it, but you can see it also has some pink on the same plant.  The other 'Cheyenne Spirit' I have has yellow blooms. 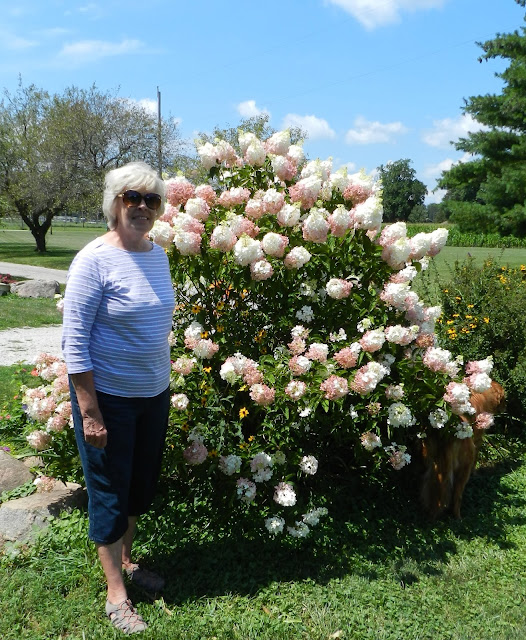 The other plant that is still going strong is my 'Vanilla Strawberry' Hydrangea.  I made my husband take this photo of me just to show how large it has grown in just a few years.  I'm 5'8", or I was before age started taking its toll, so this shrub is at least 6 feet tall.  The photo was taken a couple of weeks ago, and now the blooms have turned a darker pink with tinges of brown, but it's still lovely. 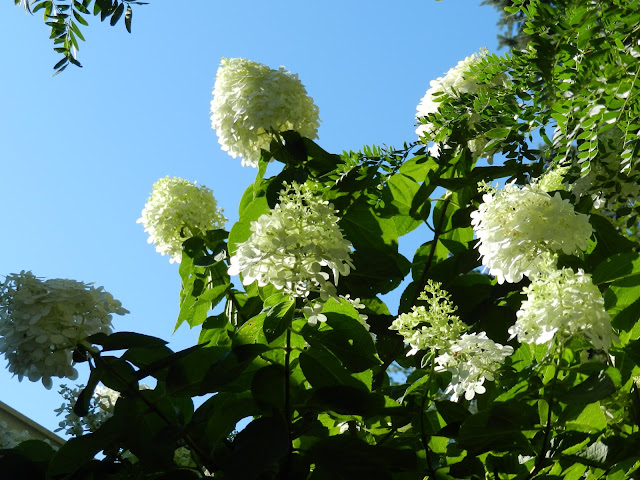 The 'Limelight' Hydrangea, however, is just beginning to bloom
and keeps soaring ever higher each year. 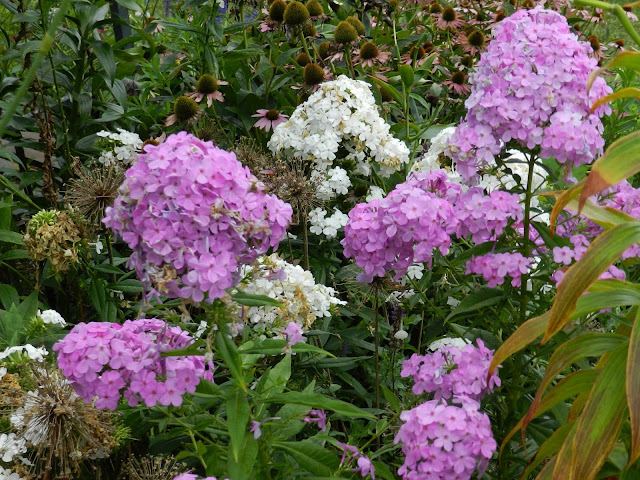 The phlox have a second flush of blooms.  The white one is 'David,' but I'm not so sure about the pink--I think this might be a volunteer, since I also have some pink ones in my shade garden that I know I never planted. 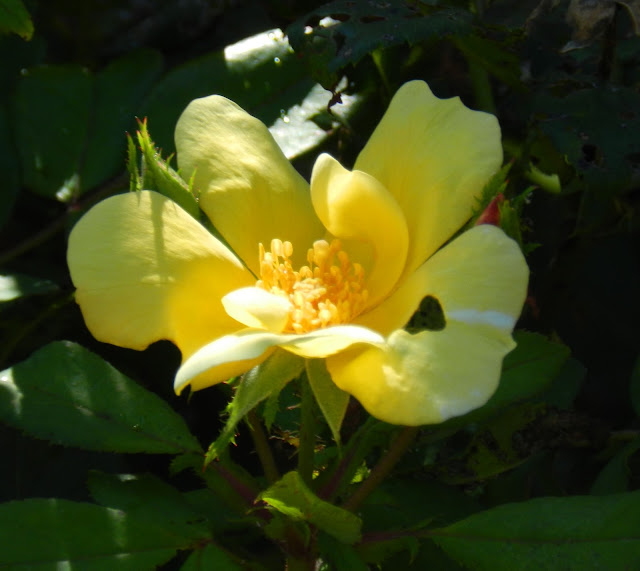 The 'Radsunny' Knockout rose also is beginning a second flush of blooms.  It must have heard me telling a friend that I thought I might dig it out next year and plant something else.  We'll see--I have two, and unless the second one starts over-achieving, it may be destined for the compost pile. 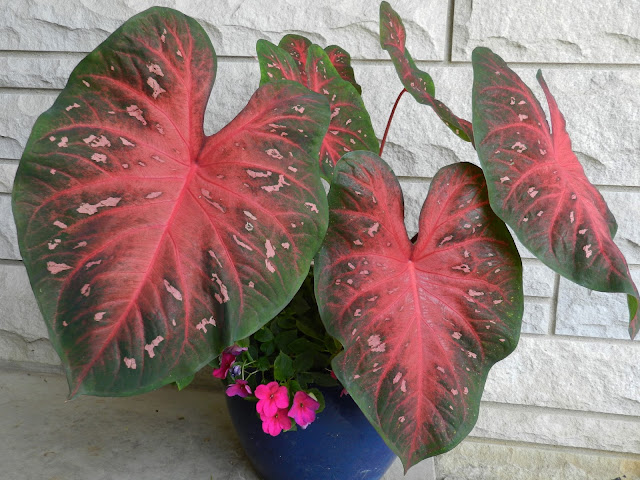 Containers are still looking good, for the most part, though some of my petunias are getting rather leggy.  I had to share this container on the back porch, though--these caladium leaves are huge!  They are at least 10" across and 12" inches long.  I received these bulbs last year from a fellow volunteer at the County Nursing Home who passed away unexpectedly this winter.  I hope they make it through many more winters as a reminder of his friendship and generosity. 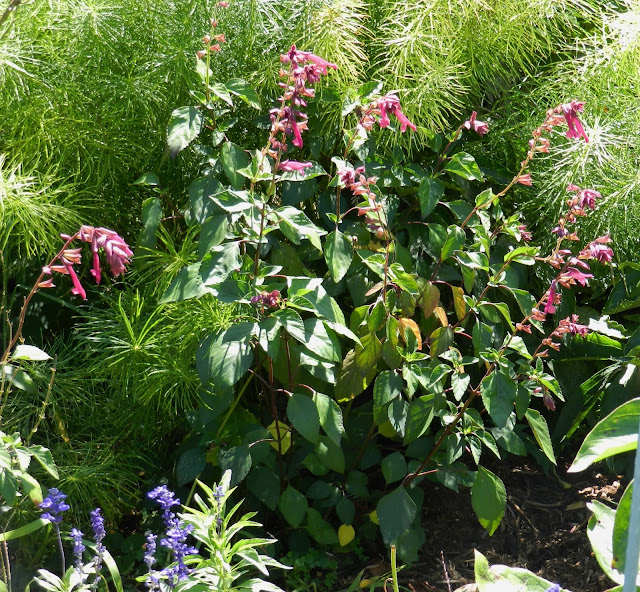 Okay, so let's move on to some new blooms or ones I haven't shown in previous Bloom Day posts.  'Wendy's Wish' Salvia is so hard to capture on camera, but it's a hummingbird favorite, just like its kin, 'Black and Blue.'  Next year I plan to plant one near the front porch where I can see the hummingbirds in action from my seat on the porch swing. 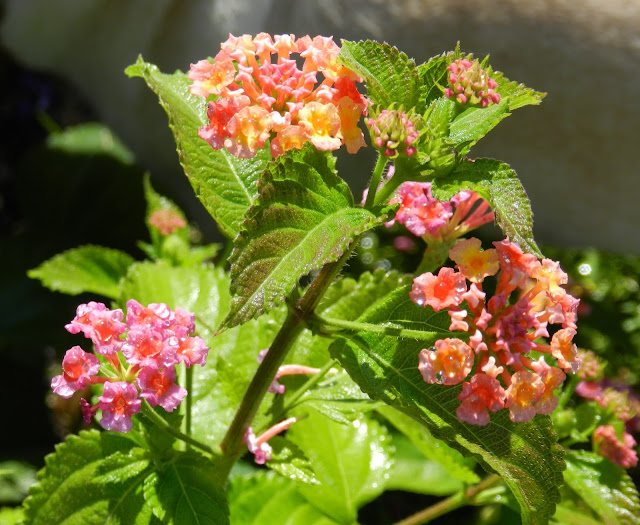 It's been so dry here for the last few weeks--I don't remember the last time we had a good rainshower--that about the only garden work I've had time for is watering.  Lantana, though, is one tough annual that seems to thrive in the heat and drought. 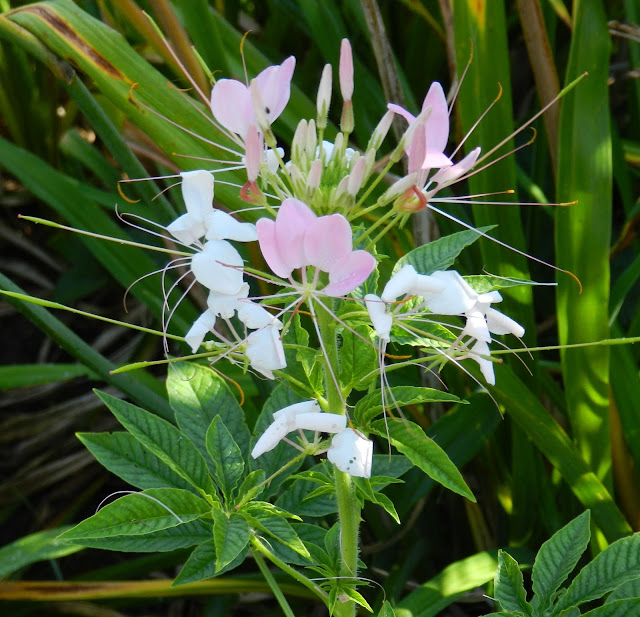 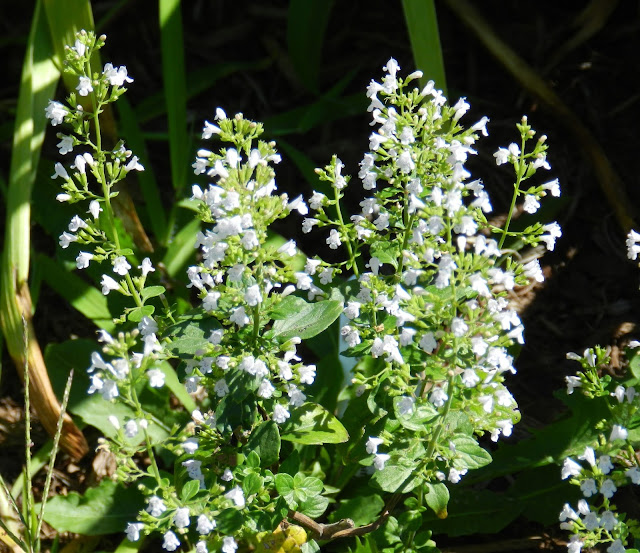 A new perennial in my garden this year is Calamintha.    After seeing this at the Olbrich Botanical Garden in Madison, Wisconsin last year where it was swarmed by bees, I knew I had to add it to my garden. 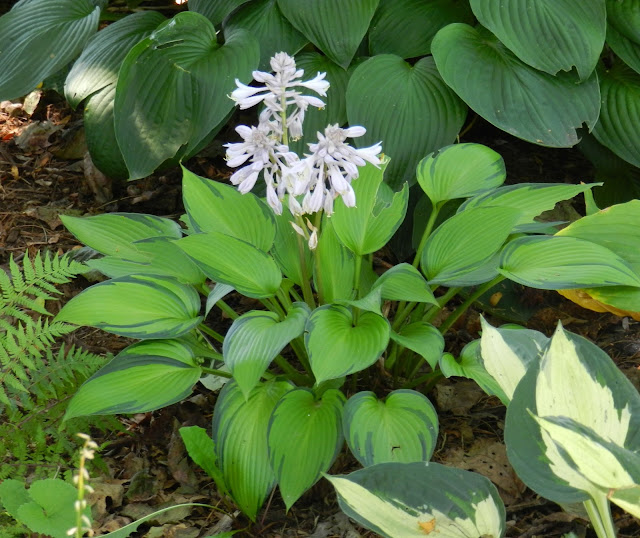 I don't usually think to include my hostas or their blooms, but this is a new hosta I planted at the end of last season that I really like.  Not only does it have pretty blooms, but I love the color and and edging on these leaves.  And 'June Fever,' unlike some of the other hostas right now, doesn't have a single brown leaf. 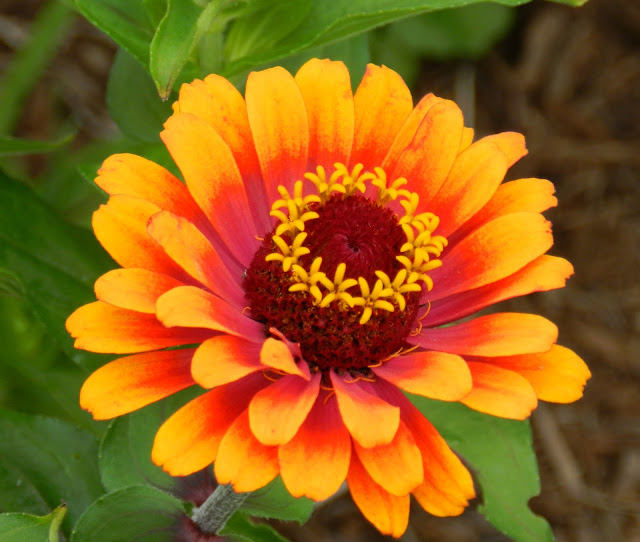 No August Bloom Day post would be complete without my favorite late-summer annual, the 'Zowie Yellow Flame' zinnias.  They started blooming a couple of weeks ago on rather short stems, but as the days have gone by, they have gotten taller and filled with blooms. 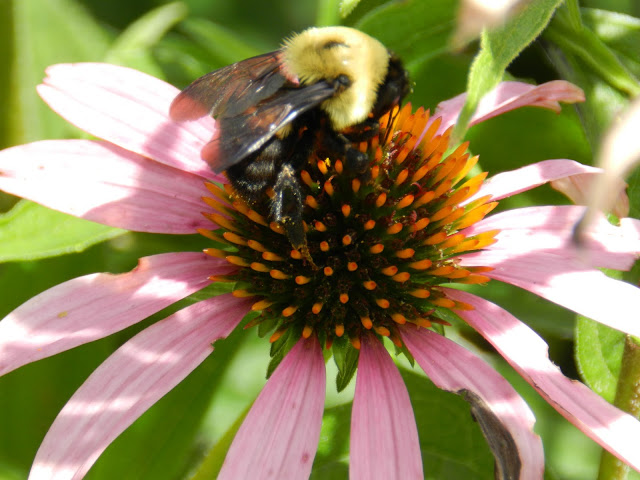 August has never been my favorite month.  It's usually miserably hot, and I still think of this month as the end of summer and having to go back to school, even though I no longer have that deadline.  The garden is often looking a bit worn-out as well.  But one aspect of August I do love is that there seem to be more critters visiting my garden than earlier in the summer.  The hummingbirds are in a frenzy of activity right now, and there are more and more bees buzzing about. 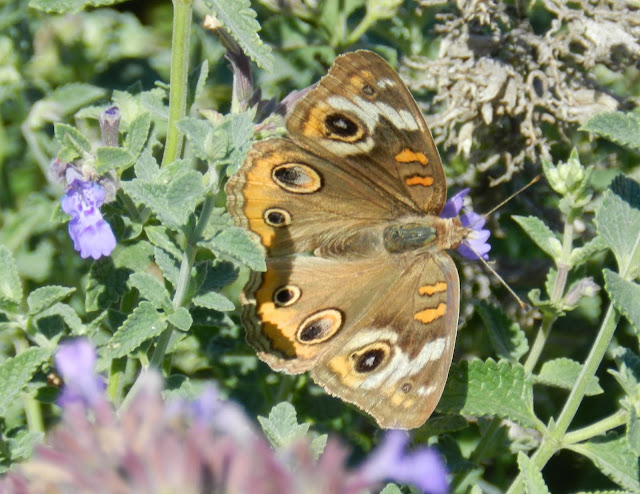 After seeing few butterflies this summer, I am finally seeing many more of different types.  Sunday I spotted the first Buckeye of the season on the Nepeta. 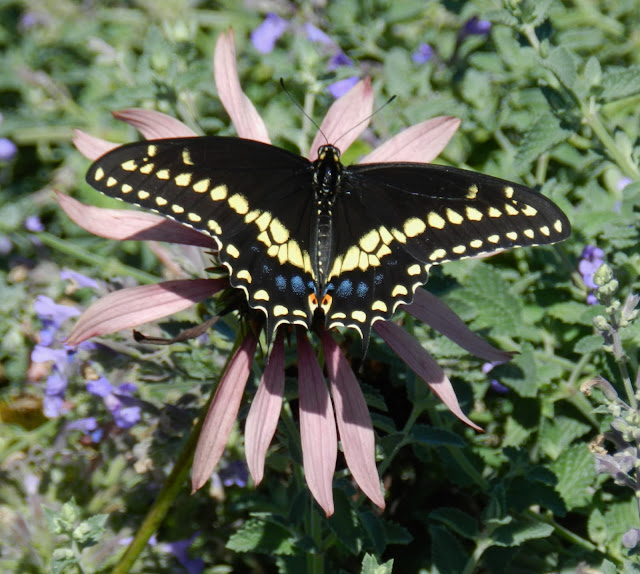 The first Black Swallowtail in some time also appeared on Sunday. 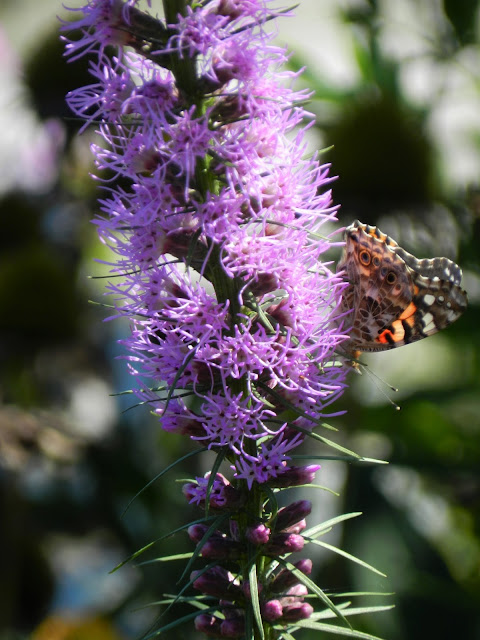 And finally, there are so many Painted Ladies.  This lady fluttered about, but seemed to enjoy the tall Liatris most of all. 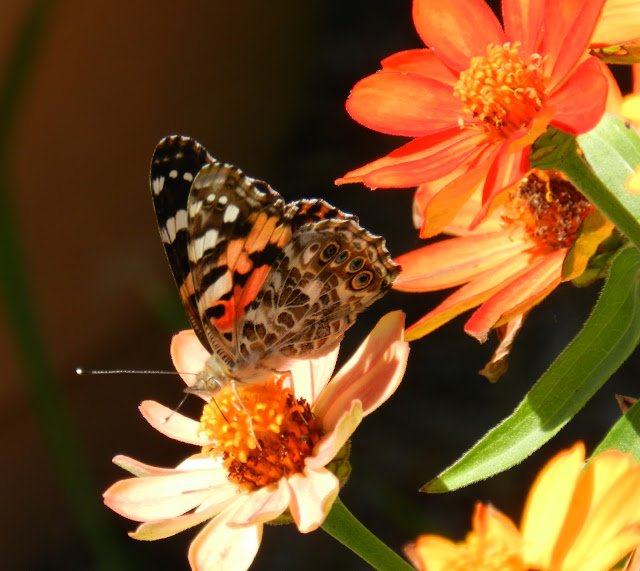 Even the 'Zahara' zinnias were sampled.

Seeing all the butterflies and other winged visitors enjoying the garden this time of year makes me happy.  And while I may not be working much in the garden, I am enjoying just standing back and enjoying some of the fruits of my labor.  Garden chores can wait till September!

It seems as though I haven't had much time/motivation for blogging the past several months, so I especially want to thank our hostess Carol of May Dreams Gardens for continuing to host Garden Bloggers' Bloom Day each month and giving me the nudge to get busy and record what's blooming in my garden every month.