Springtime in Chicago: The Flower and Garden Show

The calendar may say it is now spring, but you wouldn't know it otherwise.  It was 25 degrees (-4 C.) when I awoke yesterday morning, and blustery winds penetrated my heavy winter coat to chill my bones as I walked the quarter-mile trek from my car to my Tai Chi class later in the morning.  Despite the feeling that winter is going to linger on for awhile, for one brief afternoon last week it truly felt like spring as friend Beckie and I visited the Chicago Flower and Garden Show. 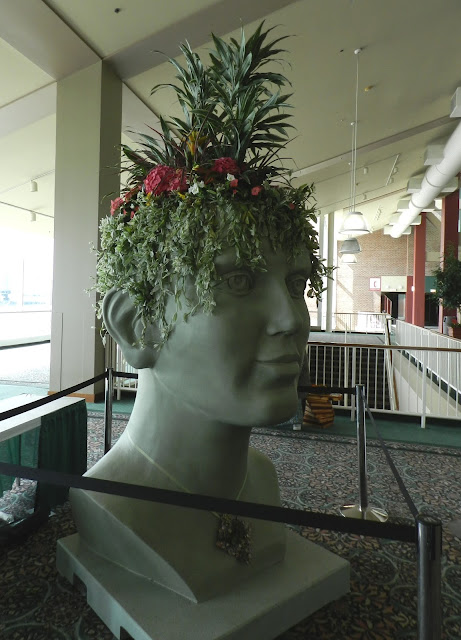 Although we skipped the show last year and visited the Indianapolis show instead, we have attended the Chicago show for several years and feel somewhat like old hands now at navigating Chicago transportation. This year we were smarter and asked the taxi to drop us off at the Flower Show entrance, rather than walk the 5/8 mile path through all the shops and exhibits of Navy Pier to get to the east end of the building.  Even without the signs, we knew we had arrived when we spotted this huge bust bedecked with greenery and blooms outside the show's entrance. 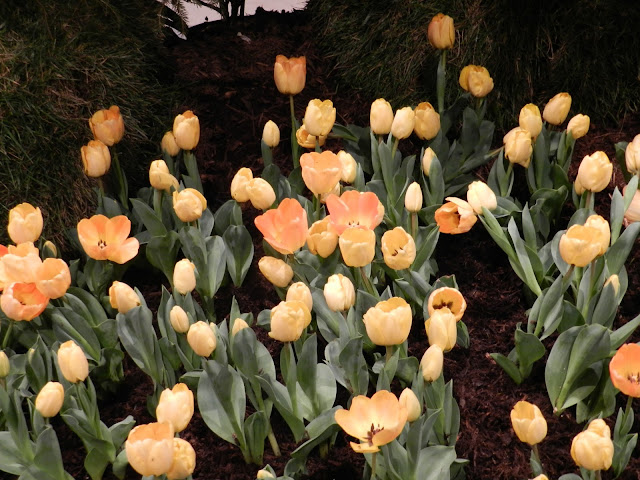 Once we entered the showroom, our spring-starved eyes were immediately drawn to the displays of spring blooms.  Tulips of every color imaginable were everywhere.  Oh, how I do love tulips! 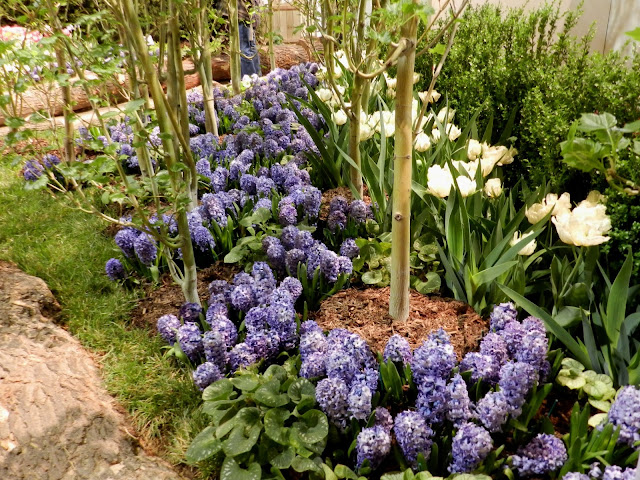 And hyacinths . . . those with a keen sense of smell didn't even need to bend down to catch a whiff of their intoxicating fragrance. 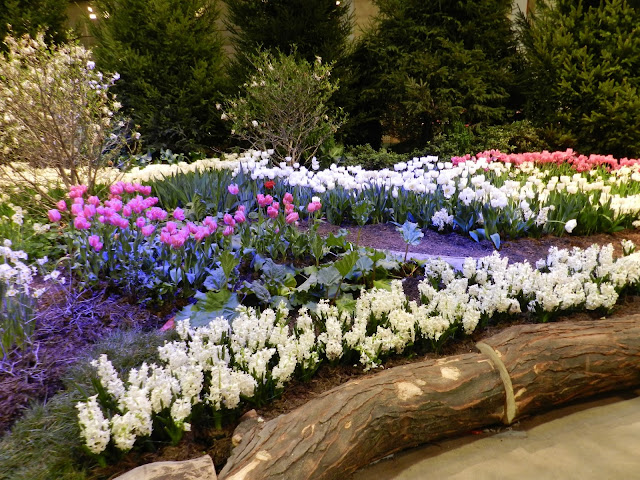 How I wish my spring garden looked like this!  I took quite a few photos of this garden--probably my favorite--but mostly I just stood and drank it all in.  The display was beautiful enough as it was, but a colored light wheel hidden in the middle highlighted the pink and white tulips, changing their hue--which accounts for the strange coloration in this photo. 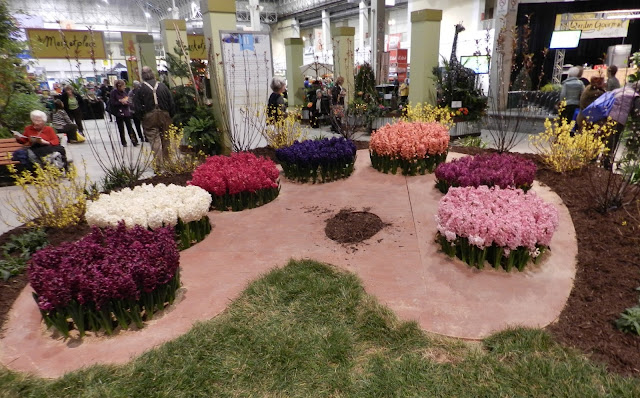 The theme for this year's show was "Art in the Garden," as evidenced by this unique artist's palette.  I must admit the theme wasn't as obvious as some in past years, but it really didn't matter, as Beckie and I enjoyed the plant displays more than anything. 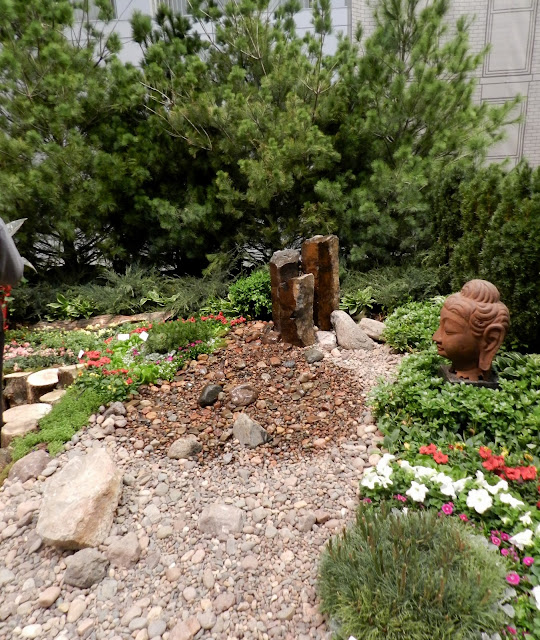 The "InspirAsian" garden was a calm oasis in the middle of the show. I was impressed when I learned that this garden was designed and built by students of the Chicago High School for Agricultural Sciences who took ideas from their connection with sister schools in Japan and South Korea. These high school horticulture students always create an interesting display at the show, but this year's was especially impressive. 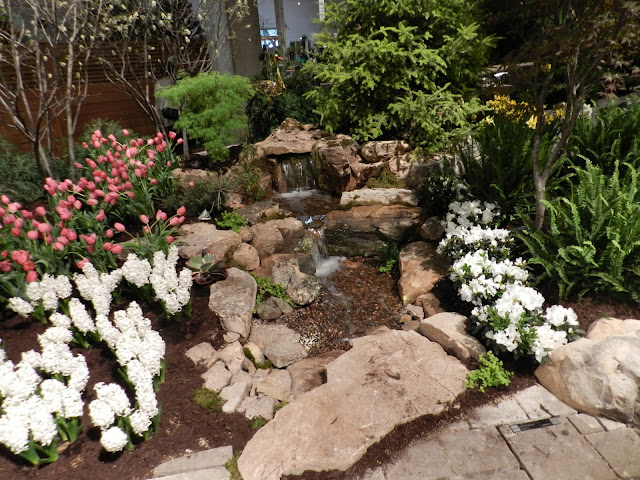 Ponds and waterfalls were featured in another display garden, "A Water Sonata."  The first pond as you entered was the smallest, but a charming one and a practical size for almost any home landscape. 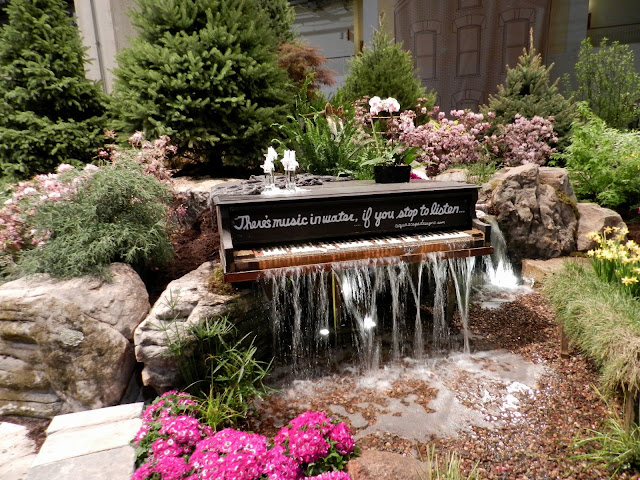 The water features grew larger as you progressed through the garden, ending with this unique waterfall as you exited.  I was entranced by this "grand" idea, but the ex-pianist in me couldn't help thinking what a shame to ruin this once-beautiful instrument.  Still, it certainly was an attention-getter. 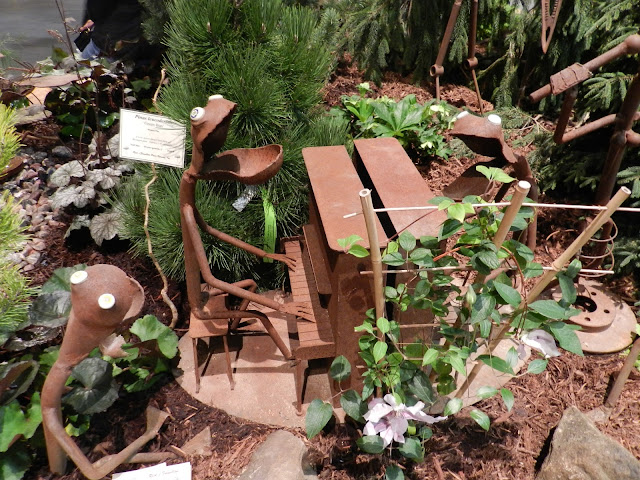 While we may have missed some of the art as we passed through the different gardens, Beckie and I both enjoyed the whimsical sculptures in the garden designed by Rich's Foxwillow Pines Nursery.  This froggie band was made from rusted pieces of farm and industrial machinery.  They made you want to boogie along with them. 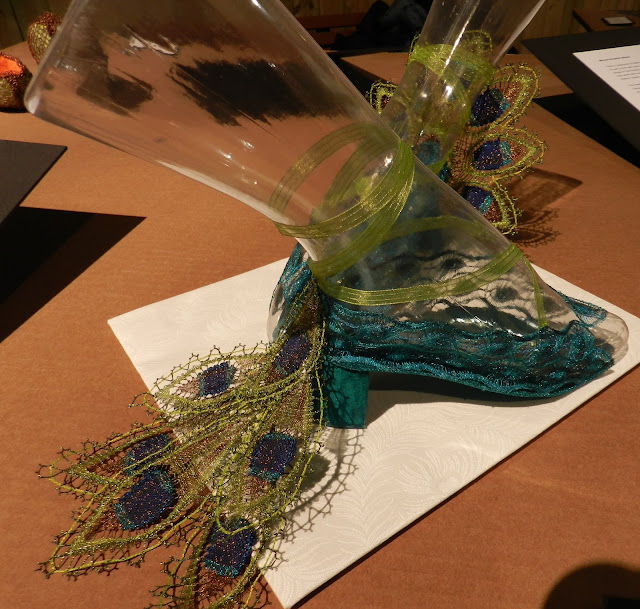 Besides the display gardens, there are always other attractions as well.  A few years ago, creative hats were a crowd-pleasing display.  This year "Footwear: Women's Stories" showcased decorative footwear designed by Chicago textile artists to represent "a defining moment in their lives."  Accompanying each unique pair of shoes or boots was a short explanation from the artist explaining what the footwear symbolized to her.  These peacock slippers would have definitely appealed to my young granddaughter! 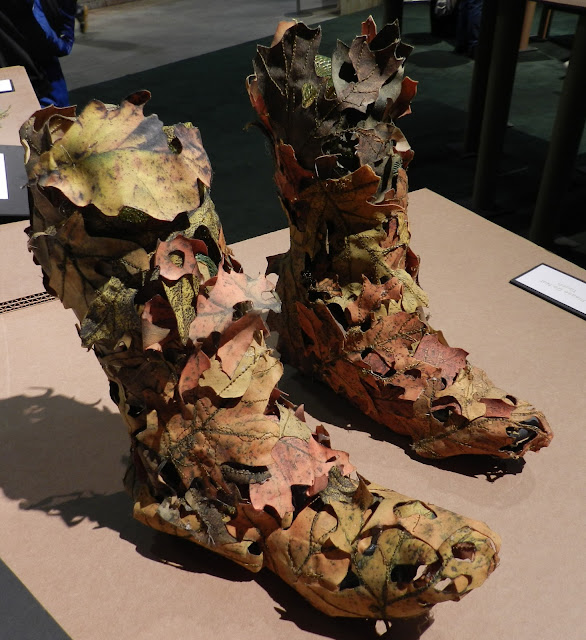 I don't remember the story behind these leafy boots, but I think any gardener can relate to them:) 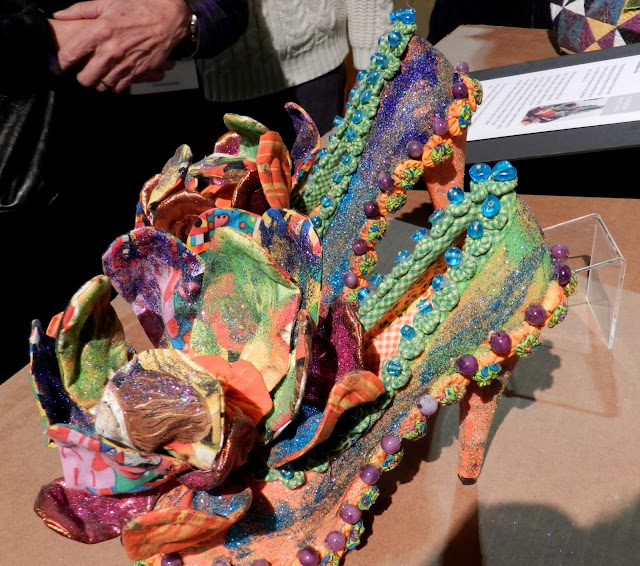 Colorful dancing shoes almost beg you to do the rhumba!  I wish I had taken a photo, though, of my favorite display--a pair of sturdy work boots with one tongue stretched out nearly two feet in length on which the shoemaker had engraved her story of creating handmade shoes for customers around the world. 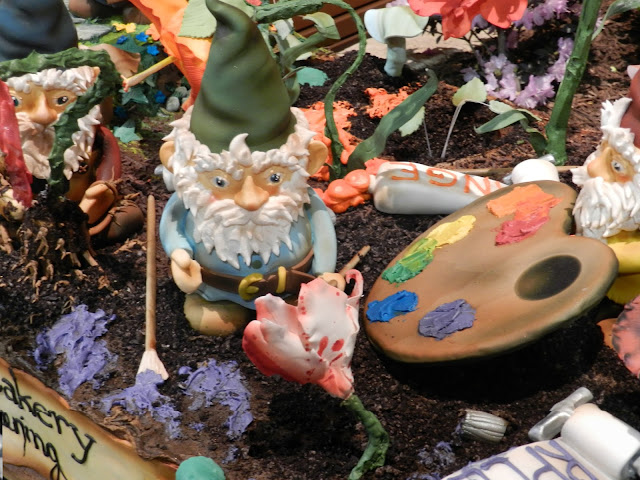 Other displays scattered throughout the exhibition hall were of elaborate cake designs. I wanted to reach out and take a lick of this little gnome's beard to make sure it really was made of frosting, but I don't think the exhibitors would have appreciated that.  So I just took their word that all of this was edible.

Visiting a show like this, I always come away with a few ideas to try in my own garden, and this year's Chicago Flower Show was no exception.  But before this gets too long-winded, I think I'll save some of those ideas for another day, so stay tuned for part II. 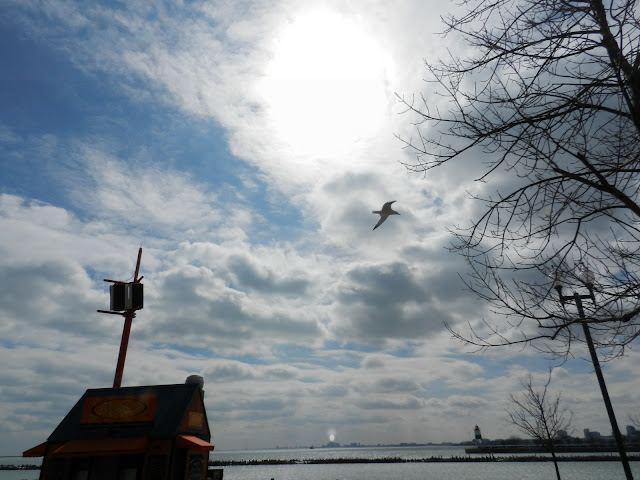 By the time we had to leave the show, the sun had disappeared, and the clouds were unleashing a swiftly falling snow.  The snow followed us all the way home, but for a few short hours on this day, we had been transported into a floriferous spring!

It's Garden Bloggers' Bloom Day once again,
time to share our excitement over signs of spring in our gardens. 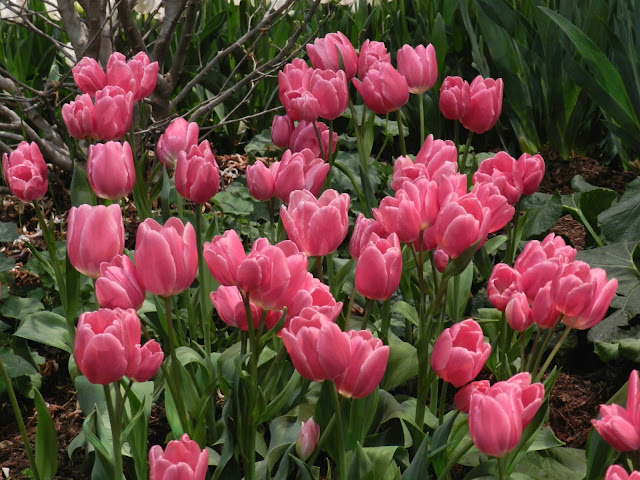 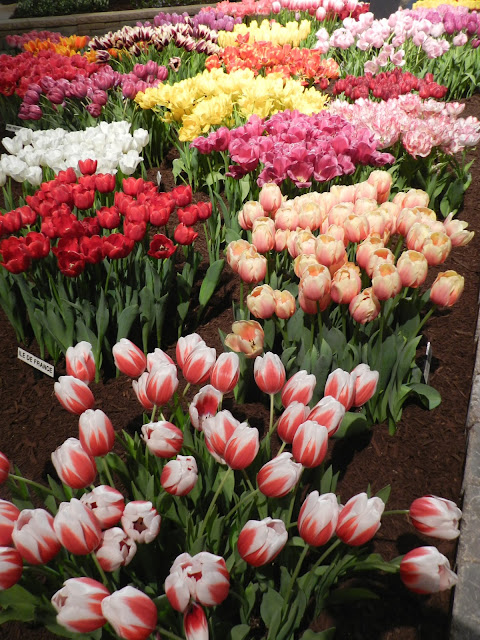 Or do you prefer masses of every color competing for attention like these?  Before you leave a comment complimenting me on my beautiful spring garden--don't!  I wish I could claim all these tulips as mine, but both of these photos were taken on Tuesday at the Chicago Flower and Garden Show. 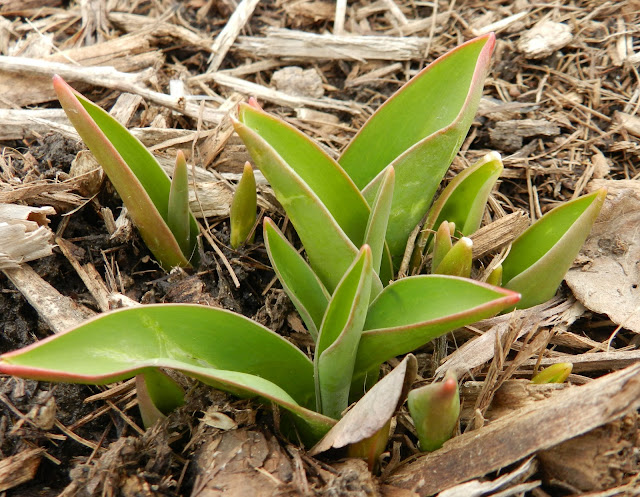 Actually, the tulips in my own garden look like this.  And I suspect most tulips in real Chicagoland gardens look like this as well, perhaps not even this far along, considering Chicago has had much more snow and colder temperatures than we have had. 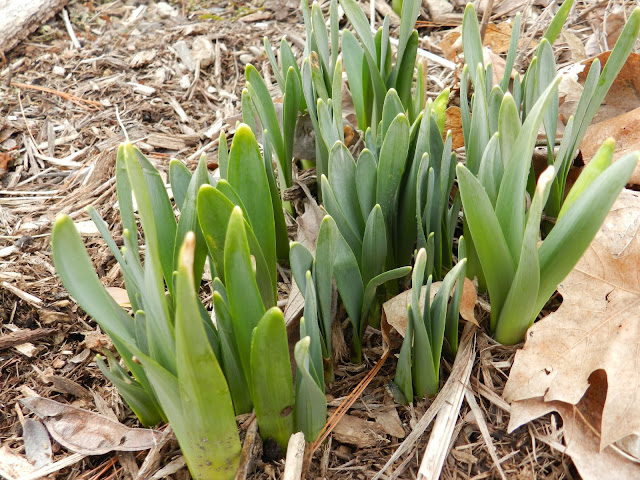 Still, I am happy to see these promises of spring; I know it won't be long before these daffodils will be sporting golden blooms. 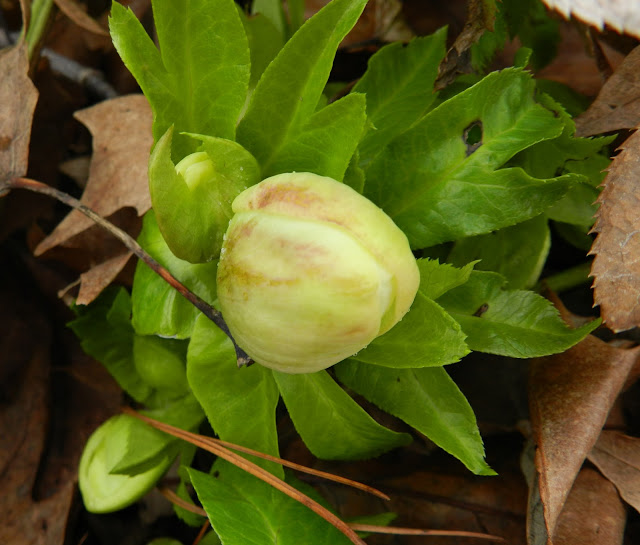 A year ago, after the crazy mild winter we had, I had hellebores, crocuses, and daffodils blooming at this time in March.  This year is more typical, and the hellebores are full of fat buds instead of blooms. 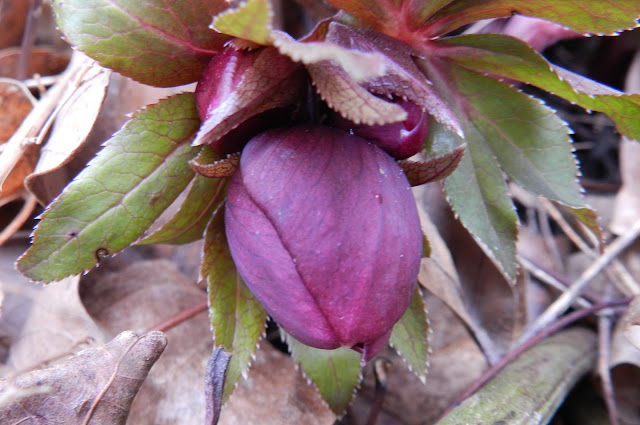 I'm hoping for some mild--and dry--weather one of these days to trim the foliage back on all of these so that their lovely faces can get the attention they deserve. 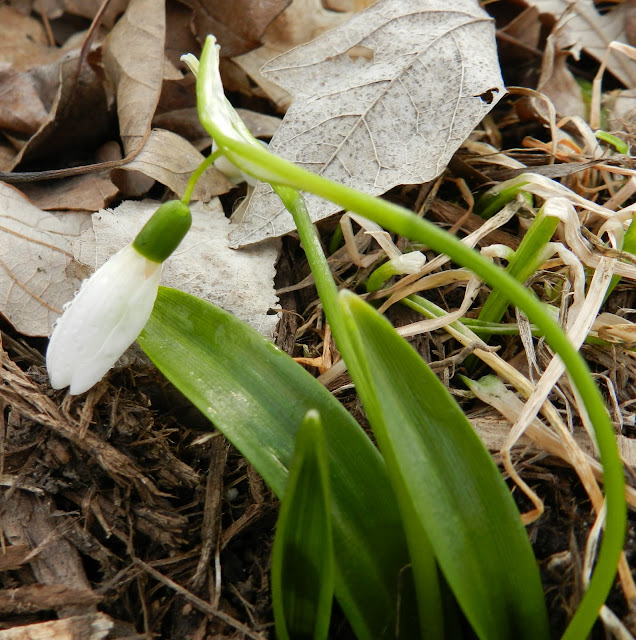 One lonely little snowdrop still remains.  I've been waiting for more of these to appear each year, but instead the numbers seem to be dwindling. 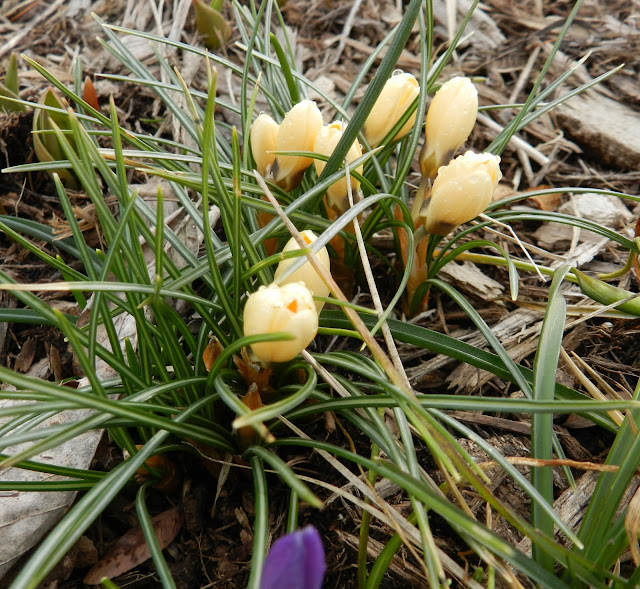 The first buds on the crocus are another welcome sign.  In mid-March of last year, I had crocuses in full bloom everywhere.  But I won't complain--this hasn't been a bad winter at all, compared to many places.  I don't remember a day when the temperature dipped below zero, and all the winter snowstorms passed us by, leaving no more than an inch or two of snow at a time. 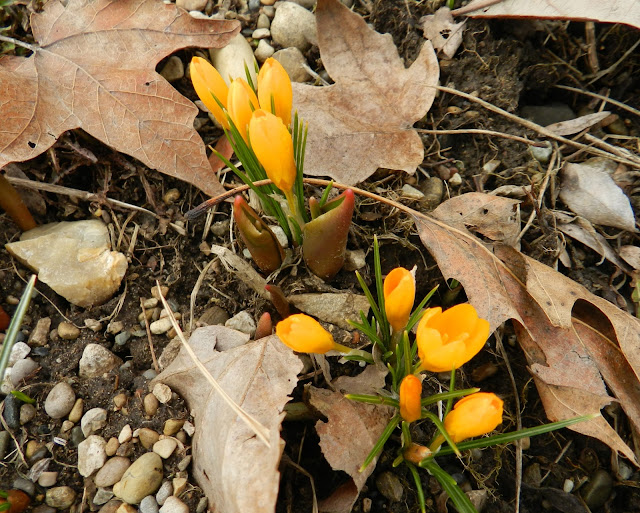 Still, I am ready for spring . . . I just need a little patience.

Having been pretty much out of the blogging loop the past eight weeks (just finished my eight-week stint of teaching!), I realized that this past week marked my fifth-year blog anniversary.  The second post I wrote that first year, back in '08, was a Bloom Day post, and the only "bloom" I had was some green foliage on the yarrow.  Today is my 61st GBBD post--I haven't missed one in five years--and I'm so happy to have this invaluable record of how my garden has changed over these past few years.  A big thank-you to our hostess Carol at May Dreams Gardens for being such an inspiration and reminding us all that we "CAN have flowers all year long."
Posted by Rose at 7:58 AM 31 comments: