Autumn.  Next to spring, my favorite time of year.  Typically, the cooler temperatures are a welcome relief from a long, hot summer, the air feels crisp rather than oppressively humid, and the green of the garden is replaced with golden hues.  Autumn arrived late this year, no matter what the calendar said, as temperatures in the 80's and even 90's remained until nearly the end of September.  When fall finally came, what I most appreciated, however, was the rain--after months of near-drought, we have finally had some significant rainfall the past few weeks.  My poor tired and thirsty plants have been gratefully soaking it all up.  What little time I've spent in the garden the last two months was spent dragging hoses around to keep everything alive, but as we all know, it's just not the same as a nice, gentle rainshower.

In fact, on this October Bloom Day, it is raining once again, so I may have to do with some photos I've taken the past week instead. 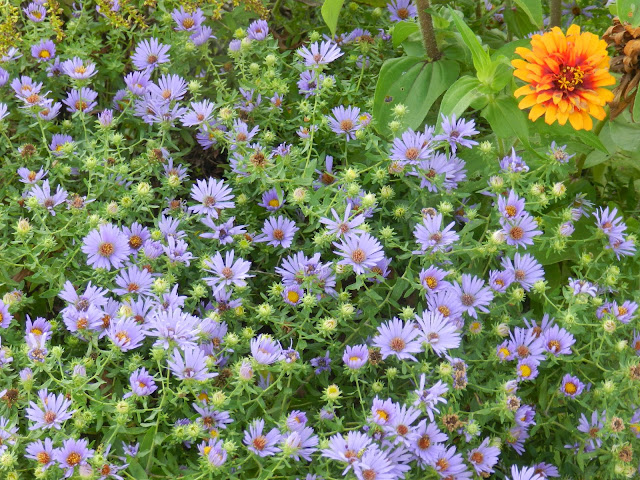 Most of my usual fall bloomers have already faded away.  'October Skies' asters were in full bloom by the end of September and now are just a memory.  The same with the Goldenrod and Turtleheads.  In many ways my fall garden has been a disappointment.  The most puzzling is that none of my New England Asters bloomed.  My butterfly garden has been full of these every other fall, to the point that I thought I should rip some of them out.  But this year the only asters to bloom in this area were Frost Asters, also known as Hairy Asters, which are more of a weedy native.  I have no idea what happened to the New Englands unless it was too dry for them.  This small area I call my Butterfly Garden is filled with mostly natives, and I must admit I usually forget to water it during dry periods.  Perhaps it's time to re-do this whole area. 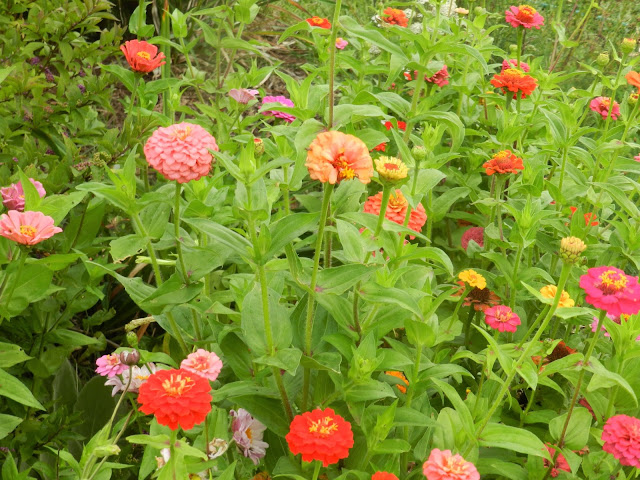 Other disappointments this fall included no-show cosmos and the zinnias.  The zinnias did bloom and eventually they grew to their usual height, but the blooms were much smaller than usual.  I planted the same variety of seeds that I have for several years, so that can't be the reason.  I'm thinking the dry conditions may have affected them, too. 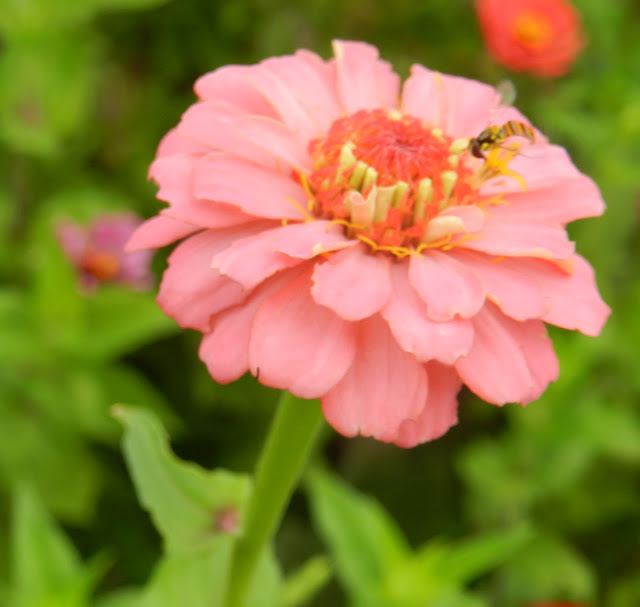 The pollinators still enjoyed the blooms, even if they were smaller than usual, fortunately. 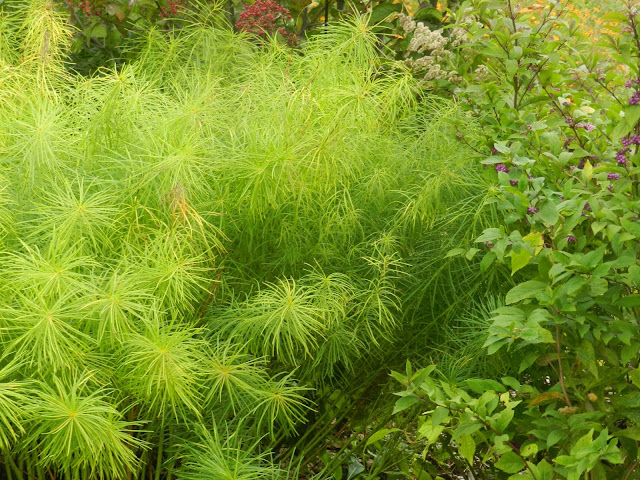 Even if there aren't many blooms in my garden right now, there are other signs of fall. The Amsonia hubrichtii is just beginning to turn to the golden hue it acquires late in the season. 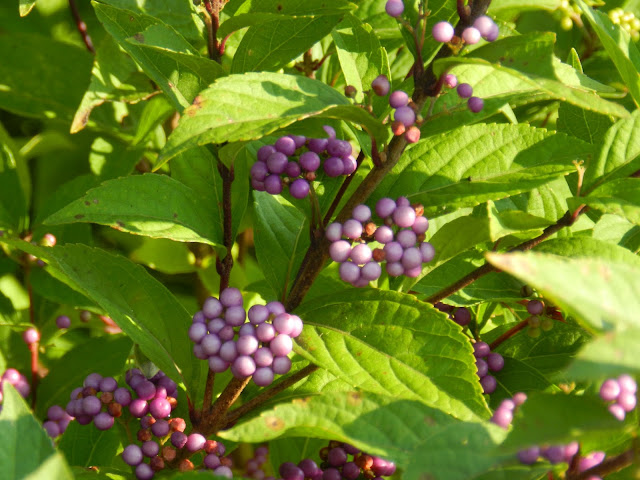 The Beautyberry next to it is full of berries right now. 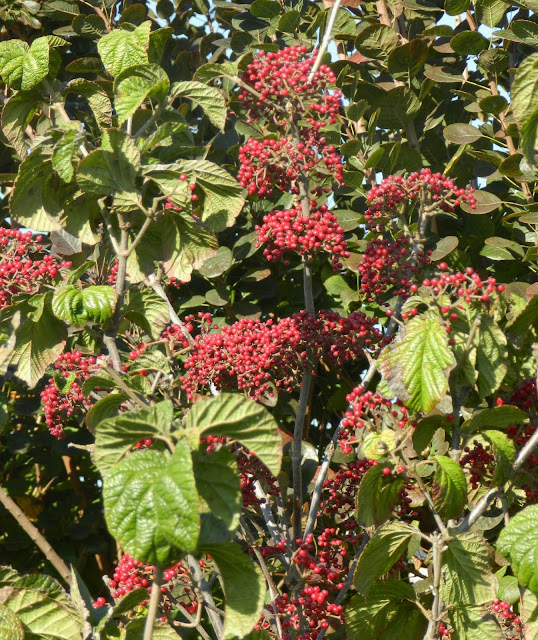 So is the 'Cardinal Candy' Viburnum.  I've never noticed many birds flocking to this shrub, but I'll have to watch more closely later in the season. 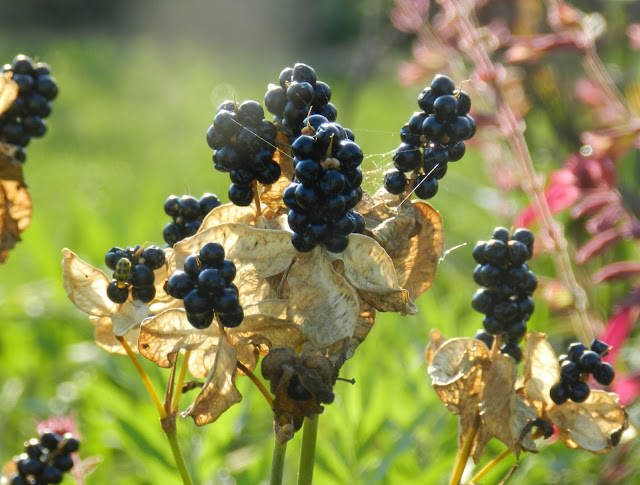 One of my favorite "berries" are those of the Blackberry Lily.  It took me years to get one or two plants established in my garden, but now they have self-seeded and form a border in front of the Lily Bed.  I think I like their seedheads better than their blooms. 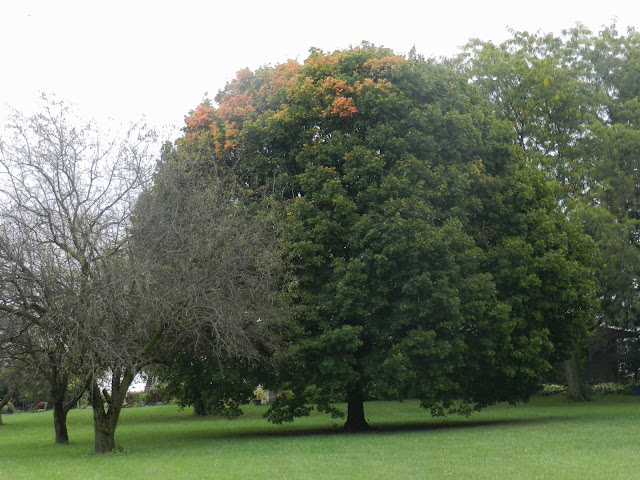 Fall color has been slow to arrive in our area; perhaps it has been fooled by the warm weather we've had--yesterday was another 85 degree day!  I've noticed only a few leaves changing, and I don't expect the intense colors of some falls because of how dry it has been all summer. The big maple in our front yard that usually has the most vibrant color has begun to change a little.  I took this photo a week ago, and you'll notice the color changes start at the top of the tree.  Slowly, the transformation will work its way down, and in a couple of weeks, the whole tree should be a blaze of orange. 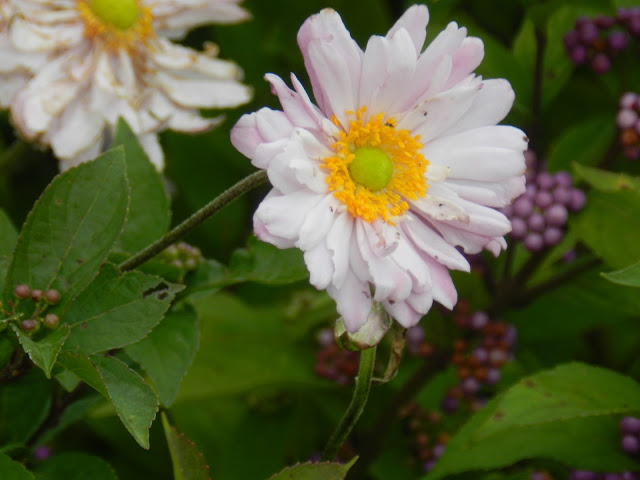 The garden is really winding down, and there isn't much in the way of new blooms.  About the only new blooms I have are the Japanese Anemones.  This pink one--name forgotten--looks a bit tattered, and the white ones didn't grow as tall as usual this year--again probably because of the dry conditions.  But they are a welcome addition to the garden, just the same. 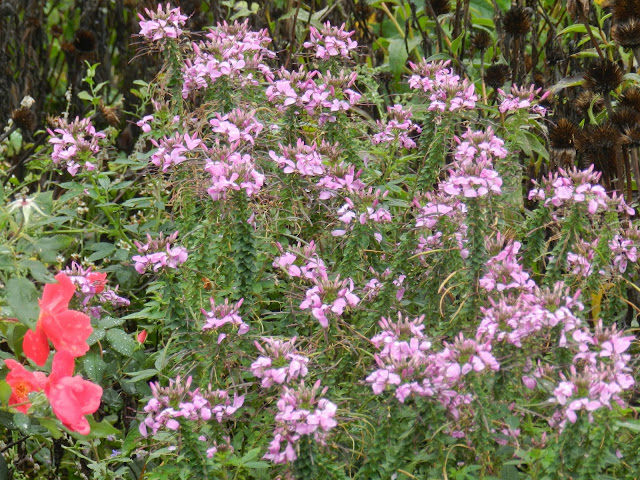 One plant that looks better than ever is the 'Senorita Rosalita' Cleome.  Ever since I started planting it directly in the ground instead of in a pot, it has been much happier.  The Knockout roses just peeking it out in the left of the photo have also put out a fresh flush of blooms. 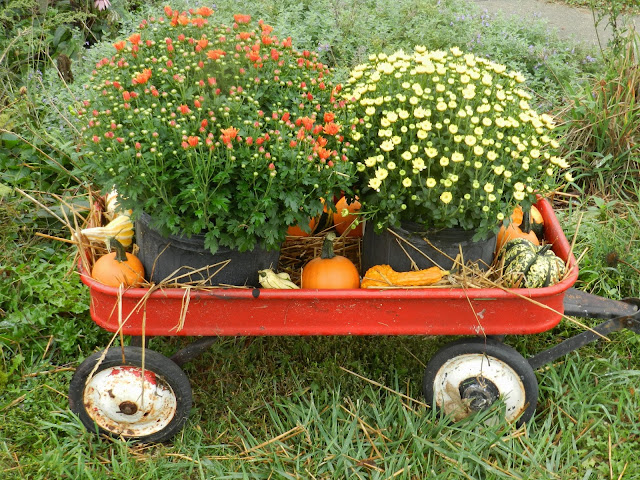 The only other new blooms this month are a few fall annuals I've planted. Most of my containers are looking pretty sad right now, especially the petunias, but I don't get too carried away re-planting fall combos.  Fall can be such a short season here in Illinois, so it's not worth the time or money to create new containers.  But, of course, I have to have a few mums! One container I did re-do somewhat with the addition of some smaller mums and some mini-pumpkins was this one by the old oak tree.  This is a new "container" this year:  this spring my husband noticed this old, broken wheelbarrow that my neighbor had set out for trash pick-up.  He thought I might want it for a planter, which of course I did!  There was even a little horse manure left in the bottom (my neighbor has horses), which I mixed up with the soil.  The funny thing about this, though, is that I planted quite a few Wave petunias, thinking they would look good draping over the sides.  But a few weeks after planting, they all died.  I thought my neglect in watering them had killed them, so I bought a few more petunias--now on clearance--and replanted.  But they all died, too!   Everything else--the 'Diamond Frost' Euphorbia, Gomphrena, and 'Victoria Blue' Salvias--did just fine, even with some neglect.  I have no idea why the petunias don't like this wheelbarrow, but I'm making a note to myself not to plant them in this next year. 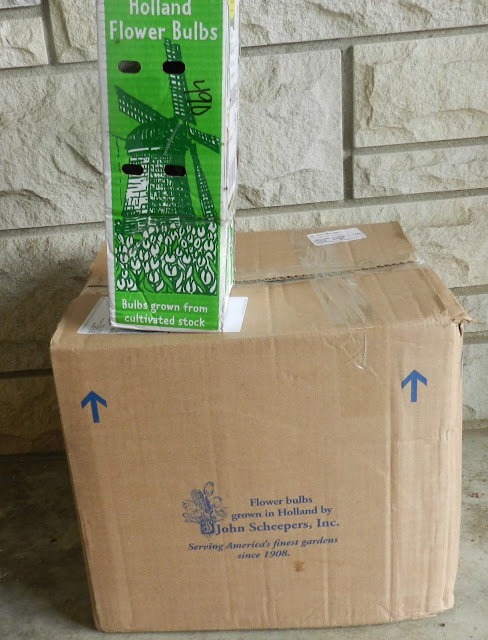 Fall means lots of chores in the garden before winter sets in, and I've been spending much more time outside the past few weeks, in between rain showers, than I have in a couple of months.  The big project ahead is pretty obvious from the picture.  I have tried to cut back on my bulb-planting the past few years, but I got a little carried away.  When my bulb orders came in, I realized I had ordered over 500 bulbs!  Not sure what I was thinking--well, yes, I do--I was enticed by all those pretty photos on the bulb company websites:)  I just hope I get them all in the ground before the snow flies! 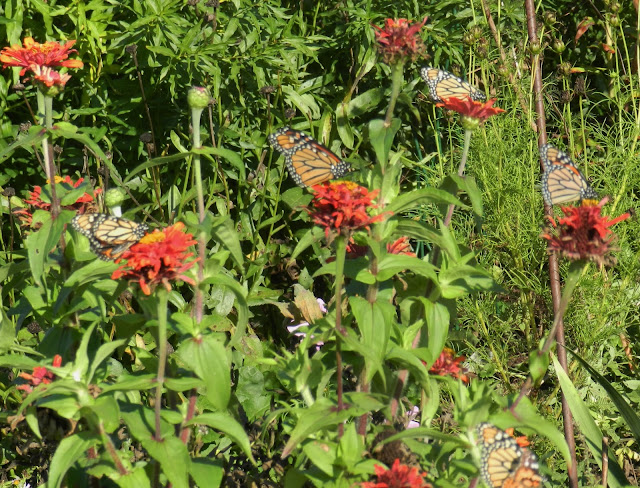 The best part of my fall garden, however, really doesn't have much to do with flowers or foliage, other than indirectly.  On Friday the 13th, my husband, Mr. I-Don't-Garden, came in from mowing and said I really needed to come out to the garden.  There, to my astonishment, was a swarm of Monarch butterflies.  It was difficult to count them all as they floated from flower to flower, especially to the zinnias, but I think there must have been at least two dozen.  I've never seen so many Monarchs at one time!  It was truly a magical, almost spiritual experience, and I found myself repeating over and over "This is amazing!" 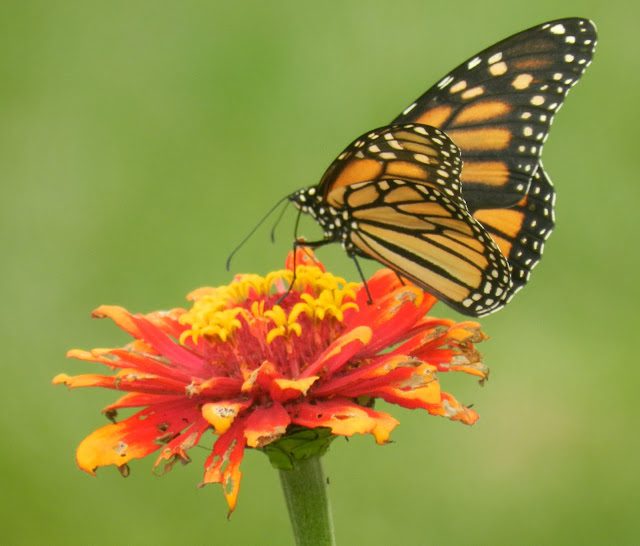 This had to be the highlight of my fall garden.  So even though most blooms are fading away and plants are getting ready for their winter's sleep, there is still something to delight in the garden.


Garden Bloggers' Bloom Day is hosted the 15th of every month by author and garden fairy expert Carol of May Dreams Gardens.
Posted by Rose at 5:02 PM 29 comments: