The main topic of conversation these past few weeks, whether on the news or on blogs, has been the weather. Areas like the southern United States and parts of the UK unaccustomed to snow have been hit with unusually cold temperatures. I have such sympathy for people in these areas; it must be hard to watch gardens full of tender plants shrivel in the freezing temperatures, and traveling in places without a stockpile of tons of salt, not to mention snowplows, has to be dangerous. 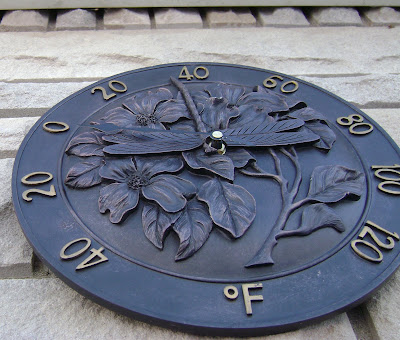 Here in the heart of the Midwest, we are used to severe winters, but still it's not pleasant when the temperature drops to Zero or below, as it has for the past two weeks.** 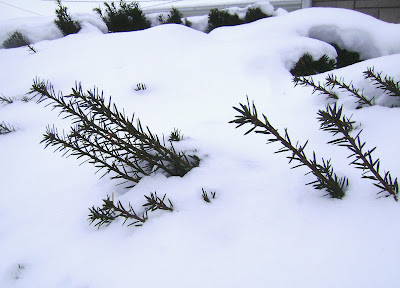 Not only is it cold, but last Thursday six inches of snow fell here, and the winds picked up, creating hazardous road conditions and closing most of the schools for two days. When the weather is like this, I prefer to hibernate inside and don't venture out unless absolutely necessary. But what are working parents to do when they have to get to work, and the schools and daycares are closed? That's when Grandma comes to the rescue! 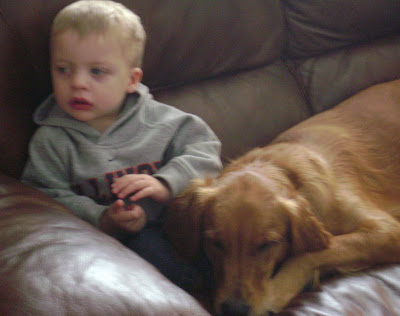 Youngest Grandson and Granddaughter came to stay on Thursday while Mom and Dad fought their way through snowdrifts. Of course, I'm always happy to have them here, and they find plenty of activities to entertain themselves. Early morning found them spending some time with "friends" Mickey, Winnie, and Handy Manny while Grandma fortified herself with her first cup of coffee and Sophie caught a few Zzzz's. Sophie doesn't leave Youngest Grandson's side very often:) 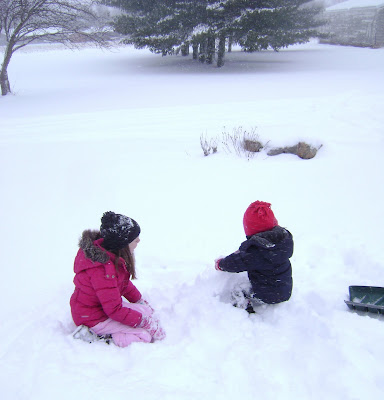 After playing in the basement playroom for awhile while Grandma finally took down her Christmas tree there, Granddaughter insisted we build a snowman. I had forgotten that it takes 30 minutes to put on snowsuits, hats, and mittens and another 30 to take them off, all for 15 minutes of play time outside. 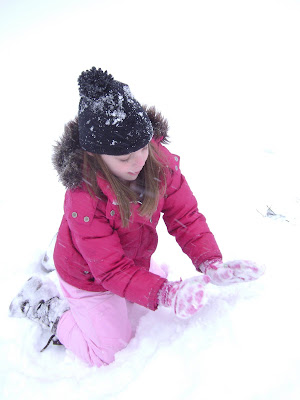 We tried our best to build a snowman, but this snow was the light, fluffy kind that doesn't stick together. The snowman project was soon abandoned in favor of creating trails through the snow and a short-lived snowball fight. 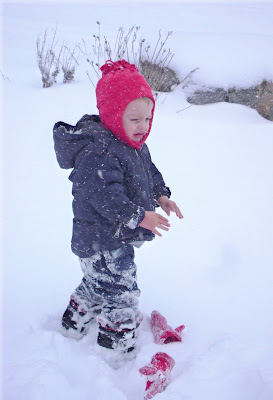 "O Mother dear,
we sadly fear
that we have lost our mittens . . ."
Those darned mittens wouldn't stay on no matter what Grandma did, so it wasn't long before we had to go back inside. 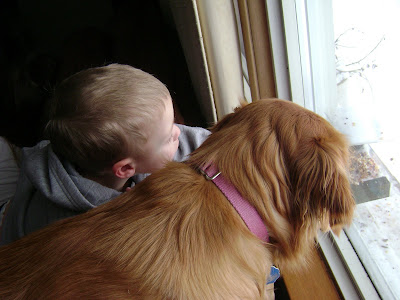 Back in the cozy warmth of the living room, Grandson enjoyed sharing one of Sophie's favorite activities--bird-watching. We were in luck--the usual assorment of juncos, sparrows, and the downy-headed woodpeckers were busy at the feeders, despite the eyes at the window. 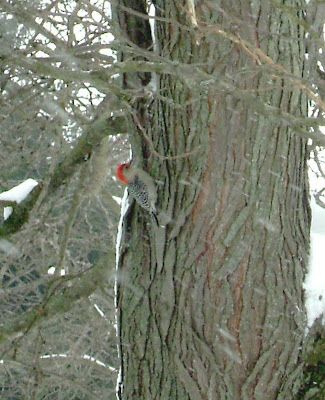 While they kept watch, Granddaughter and I hurried for the bird book to identify this new visitor--a red-bellied woodpecker. He was rather wary about coming too close, which is why this photo is not very clear. I rarely see one of these woodpeckers here, and I'm happy to say he's been visiting the feeders every day since then. 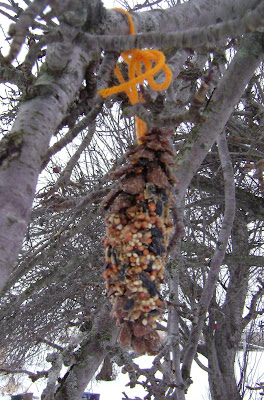 This inspired Granddaughter and I to try a new project--creating some simple birdfeeders out of pinecones, peanut butter, and birdseed. ShadyGardener posted instructions some time ago on how to create these, or you can find instructions here. This is a great activity and very easy to do with children. Granddaughter barely had time to make one before her parents arrived earlier than expected, but I finished a few more after she left. 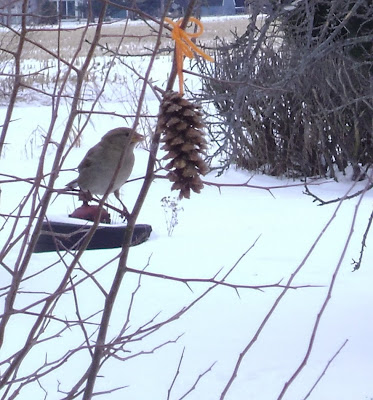 The cardinals, especially, like these simple treats, as do the juncos or the sparrow pictured here. Apparently, it's time to make some more as this one has been picked clean already. Pinecones are in abundant supply here, so there shouldn't be any problem in keeping the birds happy with treats all winter long.
We have reached the Zenith, if you will, the end of the alphabet for round 5. ABC Wednesdays have been hosted for three years by Mrs. Nesbitt, but Denise is stepping down due to time constraints. Thank you, Denise, for sponsoring this for so long! While ABC Wednesday will probably continue under the sponsorship of someone else, I, too, am going to take a little break from this meme. While I may post some ABC's occasionally, I have plans for the next few months that will make posting and visiting on Tuesdays and Wednesdays rather difficult. I have met some wonderful people around the world through this meme, and I do plan to continue to visit you on Wednesdays as often as I can. 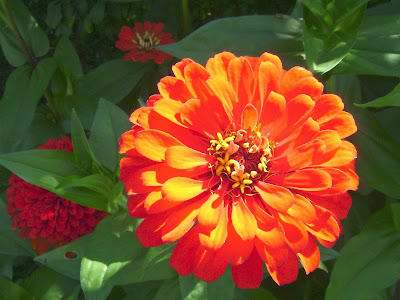 I leave you with one parting shot--what would one of my Z posts be like without a photo of my favorite Z---the Zinnia! This is what gets me through the winter!
"O Wind, if Winter comes, can Spring be far behind?"
--Percy Shelley
More creative ideas for the letter Z from all over the world can be found here.
**The forecast for tomorrow and the next several days is for temperatures above freezing. Hooray! I might get out those summer clothes that I still haven't packed away:)
Posted by Rose at 2:10 PM