ABC Wednesday and The First Snowfall

For this week's ABC Wednesday's letter Y, I had planned to post my New Year's resolutions. But then I started thinking, would anybody really want to read them? I doubt it, since they are the usual--go on a diet, eat healthier, exercise regularly, etc. etc.--and I've usually abandoned them by January 31 anyway. 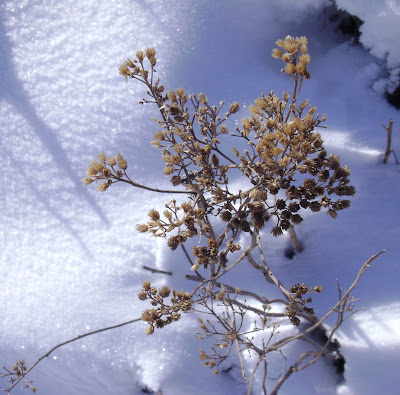 I'm not feeling very creative this week, so how about a little frozen Yarrow instead? 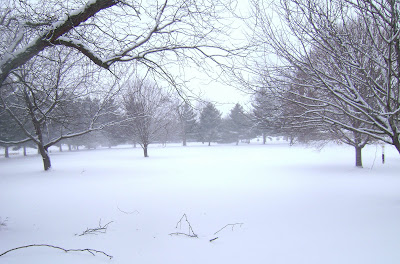 And while we're at it, I could show you some pictures of our Yuletide snow. Yes, that's the best subject for today; besides, this will give me a chance to also participate in
Nancy's "First Snowfall Project." 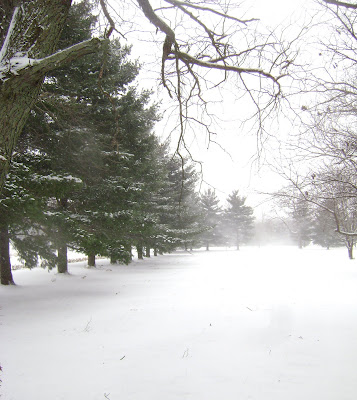 The first appreciable accumulation of snow fell here in central Illinois on Christmas Day. The flakes became larger and heavier as the afternoon turned into night and continued over the next two days. In all, we had probably around two inches of snow--just enough to create a blanket of white. When the winds picked up, the fluffy flakes created some problems, making the country roads "snow-packed and hazardous" (the news' term for "be careful!") and keeping Hubby busy for three long nights driving a snowplow. 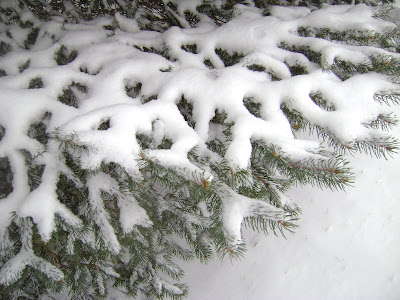 For the Midwest, however, this was a mild snowfall. Unlike our Southern neighbors and those in the Northwest, we Illinoisans are used to snow, and our highway departments are prepared for it. Salt trucks and snowplows are out round the clock until the highways are clear. Fortunately, the weather had little impact on Christmas travel. 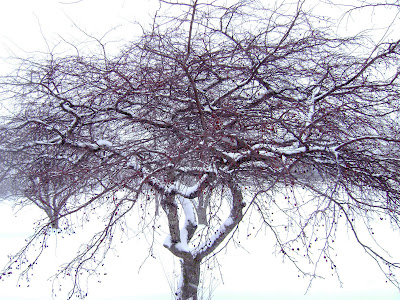 There is something magical about that first snowfall. While not as pretty as our first in '08, which occured a month earlier, there was still beauty to be found all around. The small flowering crabapple tree, a favorite haunt of the birds, took on a new look. 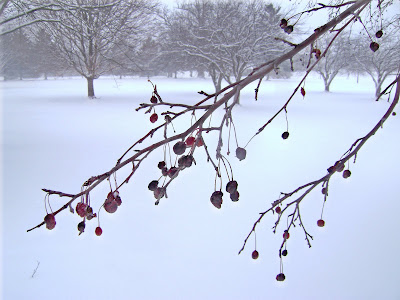 The few remaining red berries made a bright contrast to the blinding white of the snow. 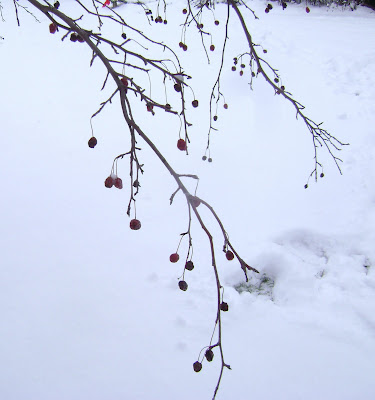 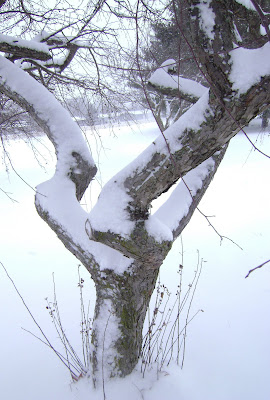 A covering of white turns tree trunks into winter sculptures. 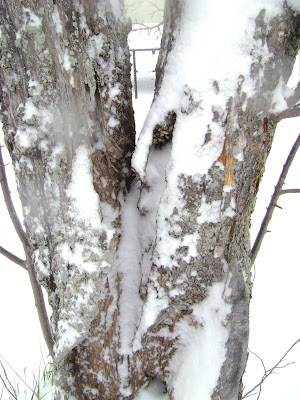 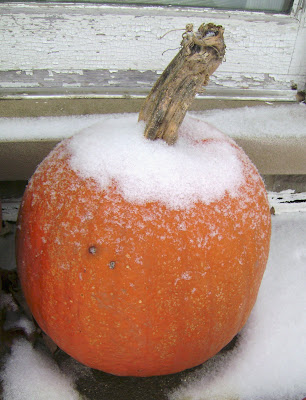 Needless to say, there was frost on the pumpkins. No, these were not part of my Christmas decorations. My children often tease me, "Just how long are you going to leave those pumpkins out, Mom?" My answer to them now is, "As soon as it gets warm enough so this one's no longer stuck to the step!" 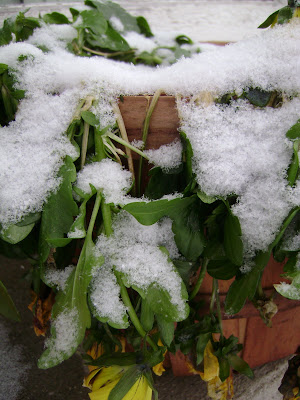 Frozen pansies probably need to be added to the compost pile, too. I doubt if they will be in bloom for Garden Bloggers' Bloom Day:) 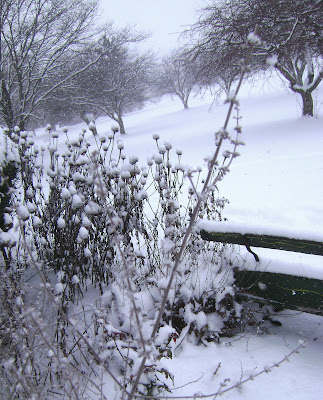 Nor will anything else in my garden be blooming by mid-January. 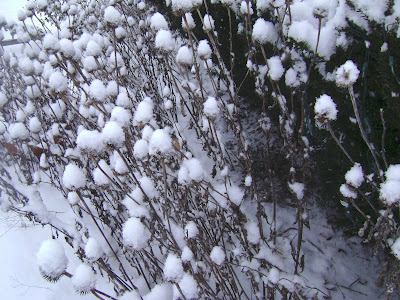 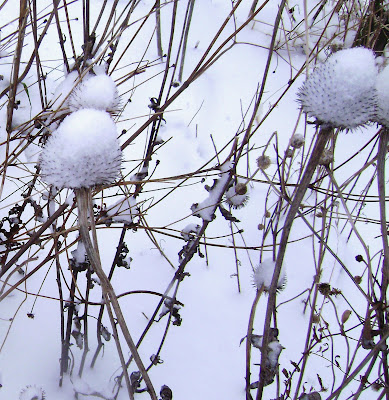 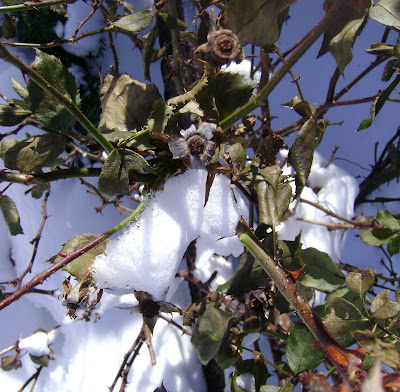 Surprisingly, the roses still show some green foliage in spite of the chill. 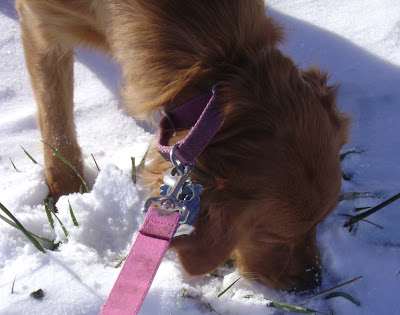 Golden Retrievers must be related somehow to Siberian Huskies. Sophie seems undaunted by the cold and loves the snow, whether making doggy snow angels or searching for buried treasure underneath. It poured down rain on Christmas Eve, so that when the temperature dropped the next day and the snow began, puddles froze into a sheet of ice underneath the snowy cover. 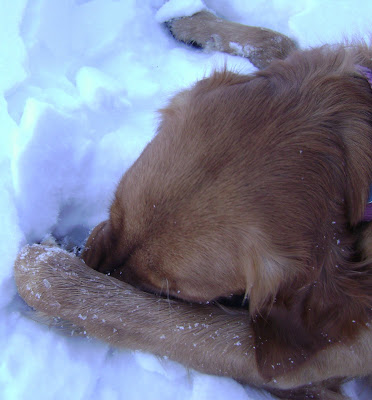 One never knows what you might find underneath it all, a nice chewy stick or perhaps that toy left outside this fall. If nothing else, Sophie finds the snow quite tasty. 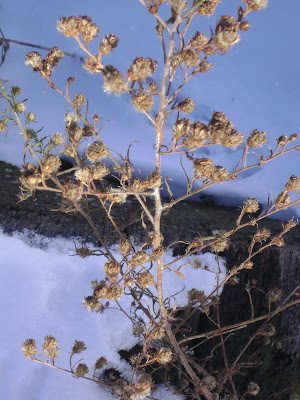 Even the weeds still standing behind the farm outbuildings
have a certain charm surrounded by white. 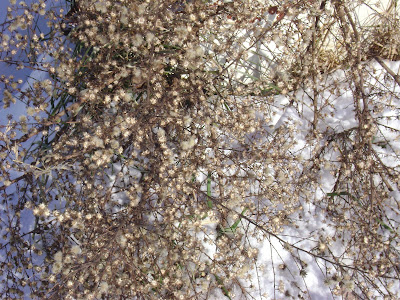 I have been trying to identify some of these weeds--er, wildflowers--since this summer and hope to show them in bloom one of these cold winter days. 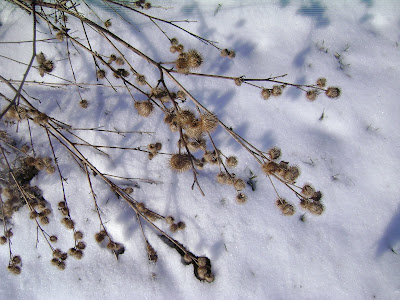 I can tell you the name of this one, however--it's the noxious cockleburr. Innocent as it looks here, its pesky stickiness is to be avoided at all costs while dog-walking. 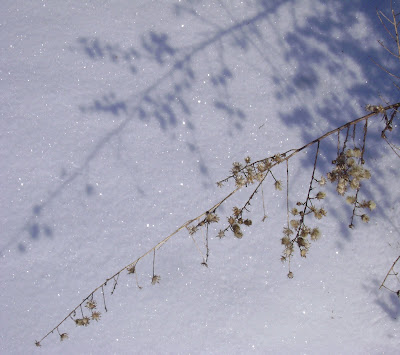 The bright winter sun creates interesting shadows and sparkles in the snow. Although we have seen the sun for most of the past week, we certainly haven't felt it--temperatures have been hovering near 0 F. each morning. 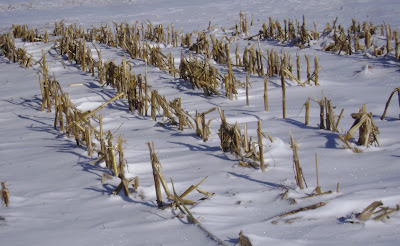 Cornstalks stand frozen in place until the spring thaw when the fields will be worked again. I feel sorry for those farmers who might still have some unharvested corn--I can't imagine working in the fields in this weather. 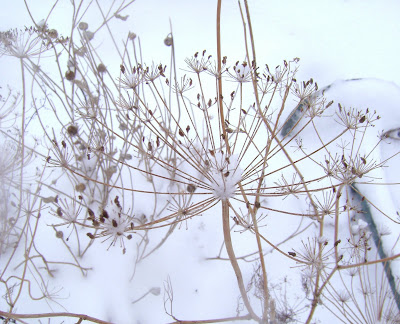 And finally, my post on the first snowfall wouldn't be complete without a photo of frozen fennel once again. You may remember I wrote a poem about it and the rest of my flowers in the winter garden a few weeks ago. Since then, Brenda at Rinkly Rimes, the Muse for that poem, has posted a much better poem which can be found here. Do check it out!
The first snowfall is always beautiful and a marvel, but I can assure you in a few weeks I will be ready for spring!

For other ABC posts, hosted by Mrs. Nesbitt, you can click here.
Also check out Nancy Bond's "First Snowfall Project" here--and why not join in?!
Posted by Rose at 5:00 AM