"Mishmash Monday"* was the brainchild of Monica the Garden Faerie some time ago, and thanks to her again, we have some alternatives for those of us who don't "do" Mondays very well. Her suggestion for similar Friday posts was "Frivolous Friday," but I didn't think I was feeling particularly frivolous today. So I brainstormed some ideas for other alliterative adjectives or nouns, considering "Friday Flotsam," but the definition of flotsam is "rubbish." Hmm, I don't think that quite fits my thoughts today. But what about folderol, also spelled falderal? According to dictionary.com, synonyms for folderol are nonsense, trifles . . . or codswallop. Now while I try to figure out the meaning of codswallop, let's look at a few trivial odds and ends left over in the photo files. 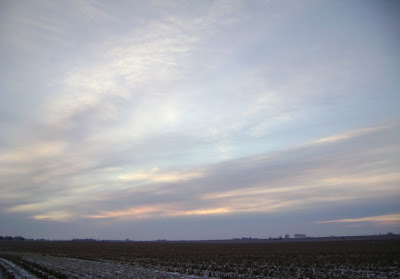 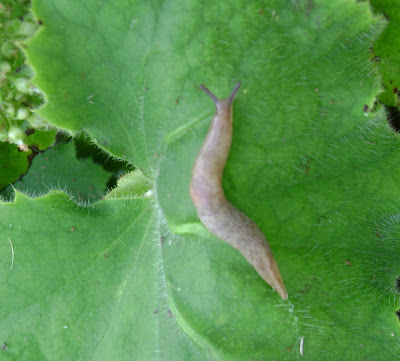 On my last post, Wendy commented that she kept looking for a photo of a slug, then realized that the slug I was referring to was yours truly:) But her comment reminded me that I had missed the boat--I had this photo of a slug taken last summer I should have used! This slug incidentally was not in my garden, but in some garden I visited this past summer, perhaps the Idea Garden. Feel free to enlarge the photo if you would like to admire its slimy beauty. I'm ashamed to say I didn't remove the slug and send it to its just reward; all I could think of at the time was getting a good photo.
................................................ 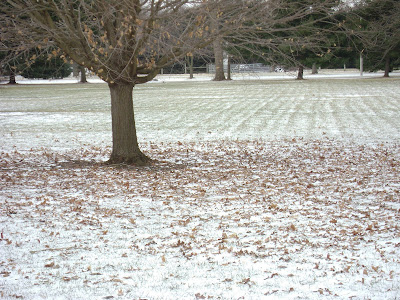 Before the snow and cold returned, we had a thaw last week which revealed some messes around the yard, including these leaves that were never raked up. I guess I never got around to finishing this job because a.) my garden helpers never returned with rakes in hand; b.) I got involved with preparations for Thanksgiving; and c.) I came down with a case of GADS. For those unfamiliar with this acronym by Carol, GADS refers to the distractions that often afflict gardeners. 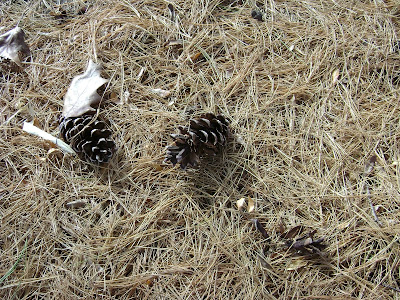 In this case, I was busy raking leaves and trying to decide whether to dump them all on the shade garden when I was distracted by the pine trees nearby. As I looked at them, I realized I had the perfect mulch available free of charge right in my own front yard. We have many pine trees bordering our lawn, which means plenty of pine straw. So instead of raking the leaves matting the ground under the maple tree, I began to rake up barrels of pine straw instead. 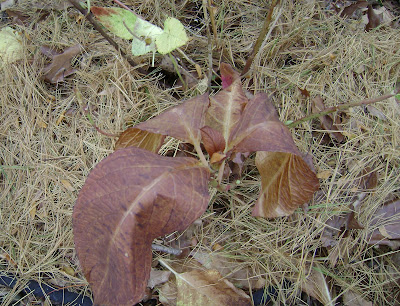 All the hydrangeas, usually left to fend for themselves over the winter, got a thick blanket of pine needles. Although they did well last summer, I'm hoping they appreciate this extra protection and will bloom even more this year. And before I go buying too many bags of mulch this spring, I'm going to recycle this free material, especially in the shade garden where the pine straw will be perfect for the mostly acid-loving plants.

Seeing the leaves on the ground also reminds me of a post from this past November. If you missed this classic by Monica about "curbside shopping," do take the time to go back to read it. It will give you a good laugh on these dreary winter days. 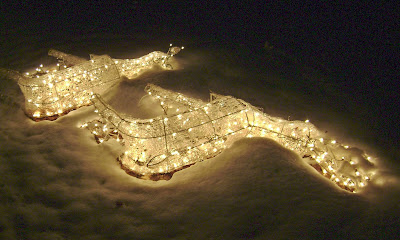 The temporary thaw last weekend also gave me a chance to finally bring in all the outdoor Christmas decorations. Can you tell what these alien-looking creatures are? They're animated lighted deer--a buck and a doe whose heads move slightly up and down or side to side. I'm not big on gaudy outdoor decorations, but I had admired the illuminated deer or angels I had seen in other yards and was so happy when I found them marked down 75% after Christmas a few years ago. But the idyllic display I envisioned hasn't always been quite so pretty. Here's a little history of these deer:

1st Christmas: The deer are placed in front of the house, clearly visible as you drive up our long lane. The grandchildren are mesmerized as the buck scans the horizon while the doe grazes.

2nd Christmas: A few of the lights go out so that the buck appears to be standing on two legs, and the does' ears are missing. After some careful thought, I begin to suspect the cause might be Older Daughter's pug, Odie, who "christened" each of the deer every time he went outside.

3rd Christmas: After an early December trip to Arizona, the deer are hastily placed outside before Christmas without checking their condition. More lights have gone out, so that now one sees only strange bodies and antlers floating above the ground. Much time is spent after Christmas checking for dead bulbs and deciding the best course of action is to string brand new clear lights all over each deer body part.

4th Christmas (this year): The rejuvenated deer are placed outside in early December with small stakes to keep them upright, clearly looking like deer once again as they are lit up. Two days later, 50 mph winds blow across the fields, and the deer topple over. When the wind finally subsides, I prop them up once again, but the stakes have bent and become frozen in the ground. Without the stakes, the deer are prey for any winter wind that blows through. The process of picking them up and placing them upright occurs several times during the Christmas season. Finally I give up, and when the grandchildren ask about them, I say, "They're sleeping." To add insult to injury, the first snowfall came on Christmas, burying them under a mound of snow and ice. Not until it reached45 degrees last Sunday could I detach them from the ground. Maybe I should consider a new outdoor decoration next Christmas . . .