"The road to hell is paved with good intentions."
(Author unknown) 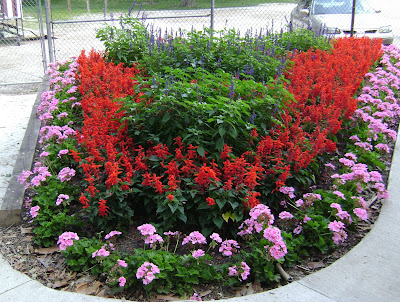 I've often hoped that the second quote is not true, because I am a person with lots of good intentions that somehow get sidetracked, or go "a-gley" in Burns' more poetic Scottish dialect. Thank-you notes are sent out months after they should have been, and replies to e-mails are lost in the swirl of thoughts in my brain. Last summer I participated in Veg Plotting's "Out on the Streets" meme about public plantings, but was late for the June deadline and vowed I would do better with the fall edition. But September came to a close, and I hadn't taken any photos. Then October went its way, and the photos I now had remained in the computer files while I chatted on about other things here that I'm sure must have been very important. I finally decided I may be very, very late, but I am going to show these photos before the snow starts flying! 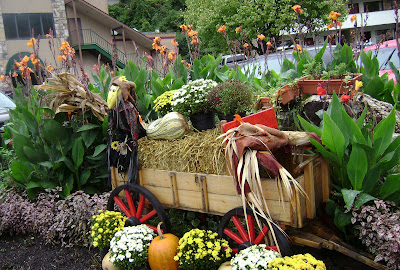 On our trip to Gatlinburg, Tennesee last month, every shop had its own colorful display of plants. Not surprising since Gatlinburg is definitely a "touristy" town and would want to present a pleasant appearance to visitors. The only problem, though, was that it was as if the Chamber of Commerce had issued an edict: all outdoor displays must contain pumpkins, at least one bale of straw, and pots of mums. This was one of the larger displays, but smaller versions appeared several times on every block until it became rather monotonous.

Back at home, I intended to show the same plantings I had included in July from our little town, showing the fall colors of still-blooming cannas, goldenrod, and tall grasses that replaced the brighter blooms of summer. But it's hard to stand on a street corner here taking photographs without someone questioning my purpose. Perhaps if I had a better camera complete with a big lens, people would think I was taking a photography class. But with my little point-and-shoot, I could feel the curious stares of drivers passing by. In a small town every one knows who you are and doesn't hesitate to ask what you are doing. I found that out quite quickly last summer when I decided to dig up what I thought might be prairie phlox from a nearby ditch. Within days, two people stopped me at different functions and asked, "I saw you down in the ditch along the highway the other day. Um, just what were you doing?" I suppose it was divine justice that the prairie phlox I "stole" eventually died in my garden. 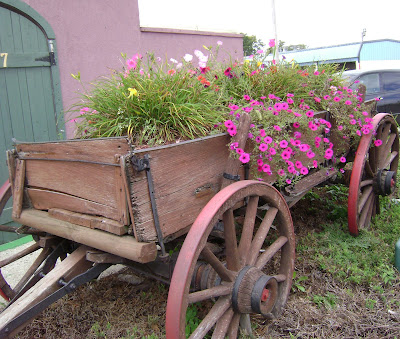 And so, I decided to venture a little farther from home to capture some photos on the street, driving to nearby Champaign-Urbana, where I could be just an anonymous photographer. All summer long, I had admired this planting situated in a narrow strip in front of the best Mexican restaurant in town. It looked much better in July with its profuse blooms than it does here in late September, but you can still see the cascades of petunias in this old wagon. A similar display in a smaller version of the wagon sat in front of a neighborhood bar a few blocks down the street, but I wasn't brave enough to park in front of the bar next to the busy street at 11 AM on a weekday:) 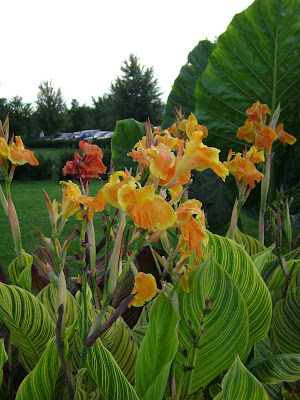 Some of the best gardening displays in town are on the campus of the University of Illinois. 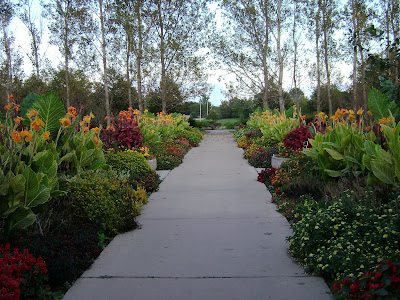 This pathway edged with cannas, lantana, profusion zinnias, and other annuals is down the street from the Idea Garden that I've often talked about here and is representative of much of the landscaping around the University. Our football team may be losing and we may have scandals about admissions policies, but you can't say our campus doesn't look good! 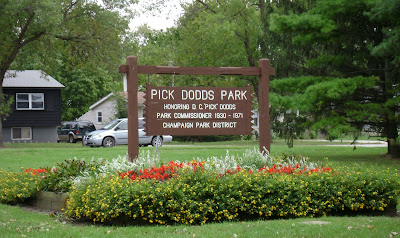 There are quite a few parks throughout Champaign-Urbana, though most are quite small. Each of them has well-maintained plantings, but what I find most impressive are the mini-parks dotted throughout the twin cities. Driving through town, you'll suddenly notice a flash of color on a street corner. 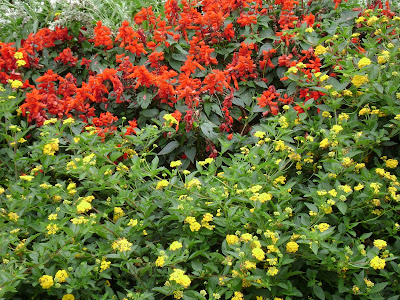 These mini-parks usually consist of mass plantings of annuals like the lantana and red salvia pictured above. Though the plots are small, they provide an attractive diversion from the concrete sidewalks and parking lots. C-U is fortunate to have such an active Park District to maintain these small oases throughout the city.

Every Wednesday I drive into Champaign to attend my weekly Tai Chi class at our local community college, Parkland College. Not to be outdone by the much larger University, Parkland has a right to be proud of its own landscaping. I stopped after class one day to photograph this colorful planting. 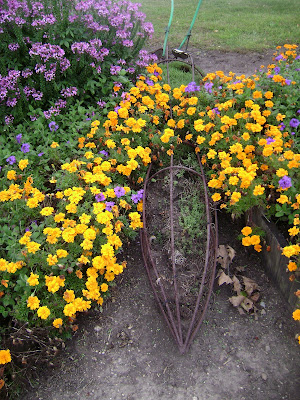 Stepping closer, I was intrigued by the metal piece in the middle. Was this some sort of abstract garden sculpture? And what were those pieces of hose doing standing upright on the other side? I walked around . . . 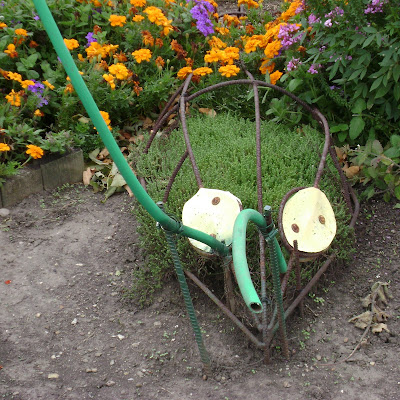 Duh! It's a butterfly! Stepping back at this angle, I realized the whole planting was in the shape of a butterfly. Unfortunately, no matter how hard I tried, I couldn't photograph the whole flowerbed to show its shape; an aerial view would have done the trick, but no hot-air balloons were available at the moment. 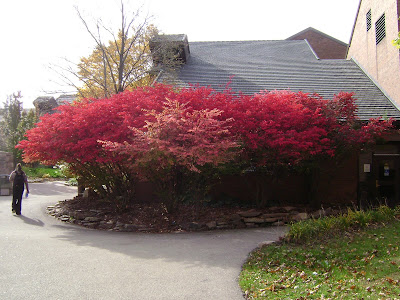 Again, I was a little self-conscious walking around the campus buildings taking pictures, but I did have to sneak in this photo for Carol. You may know how much she has warned against the "evils" of burning bushes, but I have to be honest--I love them in the fall. This particular planting, I thought, showed them at their best--and do enlarge this to get a better view. A burning bush can get quite large, as tall as a small tree, and oftentimes landscapers and homeowners don't take this into account when they plant them. But the landscapers here at Parkland must have done their homework and pruned these shrubs to grow as trees instead, making a fantastic show of fall color. I'm not sure what the pinkish tree in the foreground is--perhaps another species of burning bush? 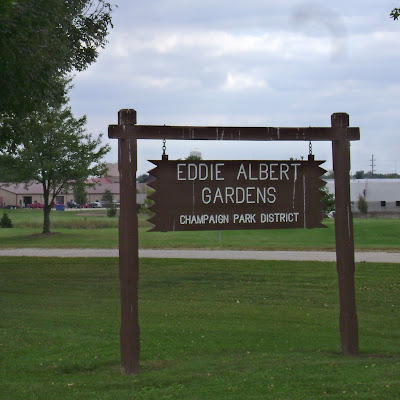 Walking around the outskirts of Parkland's campus I found a few places I didn't know existed. 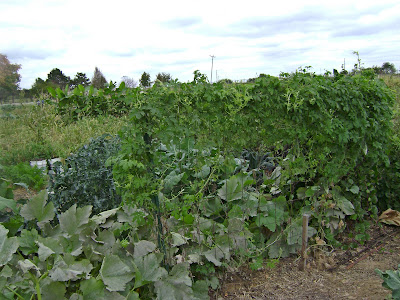 The gardens referred to on the sign above are actually gardening plots, available to anyone in the park district. Most of the vegetables had been harvested by the time I took this photo, but I did talk to one brave gardener on this cool day in early October as she looked for a few remaining tomatoes. 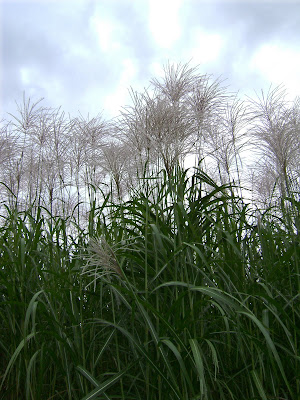 As I was leaving campus, my eye was caught by this field of grass. 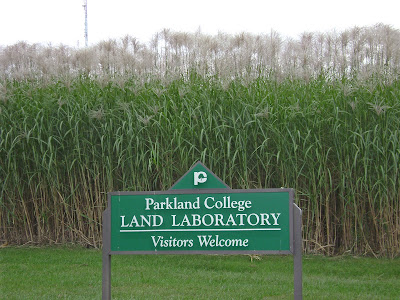 The sign indicates this planting's purpose--I guess--but nowhere could I find a sign that identified the grass. Any ideas? This had to be the tallest grass I'd ever seen, easily reaching twelve feet or taller. This would certainly make a dramatic statement in a home garden! 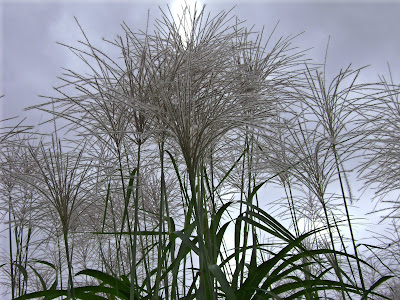 This is just a very brief overview of some of the sights around town. But I realized as I drove along, looking for photo opportunities, that Champaign-Urbana is an area that realizes the importance of aesthetics, not just finances. From the university to the park district, well-maintained gardens and public plantings receive a high priority. It may not have mountains or other natural scenery, but C-U has created its own beautiful scenery.
Posted by Rose at 2:15 PM

Labels: " Parkland College, "OOTS, U of I gardens