November GBBD: End of the Season?

Every Midwesterner knows that November can be an unpredictable month. Often gloomy with gray, wet days that never end, this is one month I've often wished could be wiped off the calendar. Last year, however, was an exception. I remember planting bulbs, warmed enough by the sun that there was no need for a jacket, all the way till Thanksgiving. This year November has been a welcome surprise and relief after an unusually wet and dreary October. Although we have had frosty mornings, the sun usually brings the temperature up to a comfortable warmth. For example, yesterday I sat through yet another disappointing Illinois football game wearing only a sweatshirt and jeans.

The cold of October has brought the garden nearly to an end. Yet there are a few things still to enjoy for this November Garden Bloggers' Bloom Day: 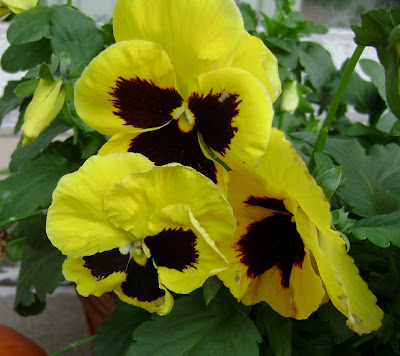 There are the usual suspects for this late in the season, like the fall pansies sitting on the steps. 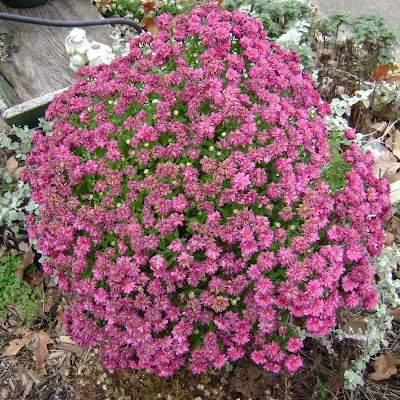 Or the potted mum carelessly planted in a container to replace the dying zinnias and heliotrope. 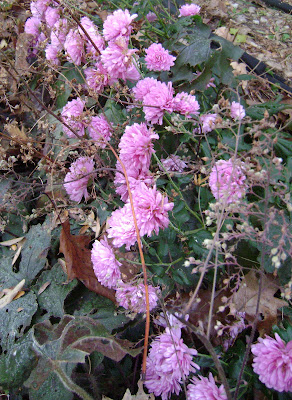 Or the lavender mum in the shade garden partially obscured by the dried feathery plumes of the heuchera. 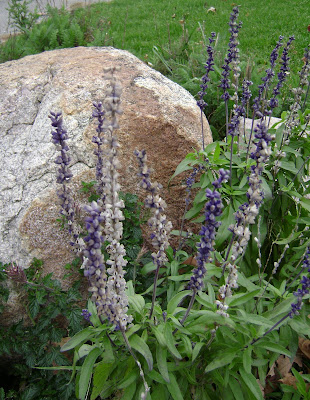 More typical scenes in my garden, though, are like this one. Some of the Victoria Blue salvias are still showing some signs of their vibrant purple of early autumn, but most are fading to a silvery hue for the winter. 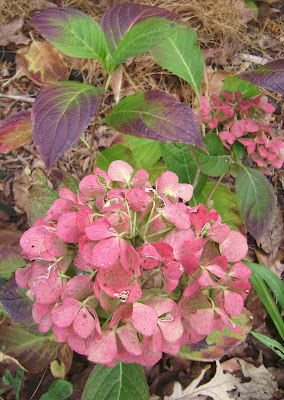 The hydrangeas are wilting and turning brown, but "Let's Dance in the Moonlight" is determined to give one last colorful hurrah before ending its season. I know you're probably tired of me showing yet another photo of this plant, but this fall I have been enthralled by the hydrangeas that have been almost as colorful in their final days as they were in their summer prime. 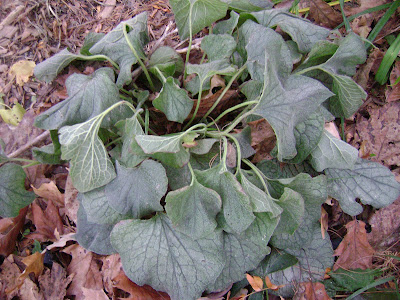 Looking for something--anything at all--still blooming in the shade garden one morning, I was sad to see that the Brunnera "Jack Frost" had finally succumbed to the frost. Or so I thought . . . 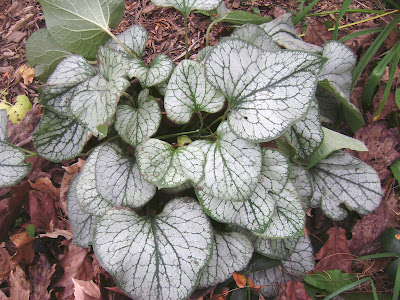 The next day, after a few hours of warm sunlight, I was surprised to see a full recovery! "Jack" is typical of what it is still blooming in my garden--what I call the "hangers-on." 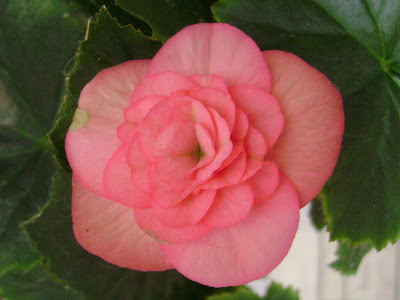 Still hanging in there, protected on my back porch, is the Desert Rose begonia. This is one of the few plants that will be taken in the house for the winter--I've never had a begonia do so well for me as this one. 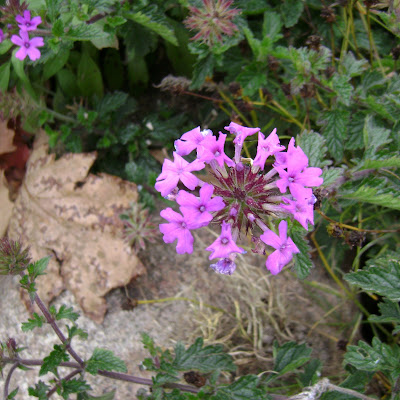 Another hanger-on is the "Homestead" verbena. It seems to actually enjoy the cooler weather, but here in zone 5 it is an annual so its time is limited. 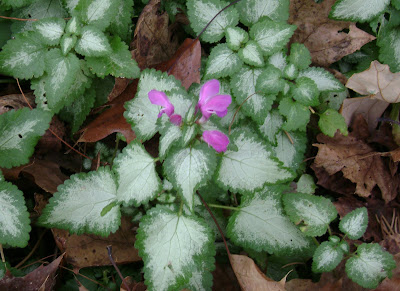 The lamium, specific name now forgotten, is another plant unfazed by cool temperatures and is still setting blooms. If covered with leaves, it wil usually stay green all winter. 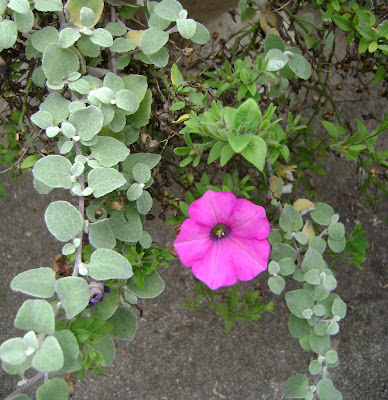 A few stray petunia blooms are also hanging in there, along with the helichrysum. Someone asked me about this plant on a previous post. It often goes by other names, such as licorice plant or mouse ears, and it is one of my favorite accent plants in containers. 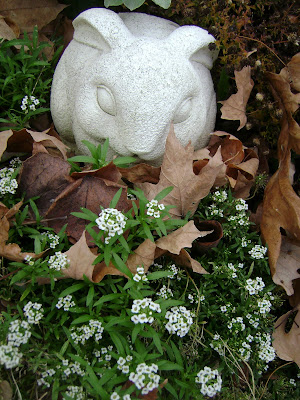 Another tough plant is the sweet alyssum. I think all of these re-seeded from last year. They were getting rather leggy this summer so I gave them a "haircut," which gave them a new burst of energy for this fall. 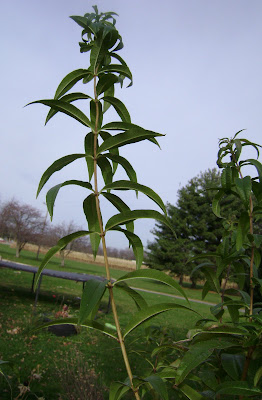 There are a few surprises for this time of year, though. This is the first year I have planted lemon verbena, purchased early in the season from the local Herb Society's plant sale, and I don't think I've ever featured it here before. According to information on the Missouri Botanical Garden website, lemon verbena, Aloysia triphylla, reaches a height of 2-4 feet. Not to brag, but my plant is at least 5 feet tall! (Wish I'd moved that trampoline out of the background, though.) 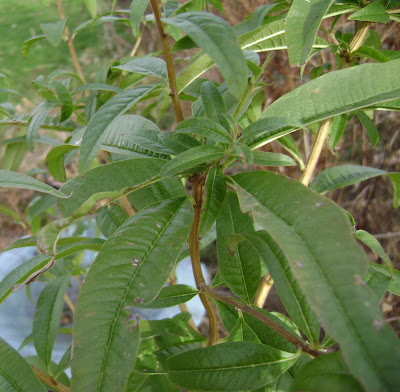 However, the website also mentions that it has showy white flowers from June to September, but mine never bloomed. I'm not too disappointed, though, because this plant has done so well otherwise and provided much more than blooms. Every time I was in the Butterfly Garden I couldn't resist pulling off a leaf or two and taking in its heady lemony scent. While it can be used in making teas or desserts, I have only dried the leaves in hopes of making some potpourri. Unfortunately, while lemon verbena is a perennial in zones 8-10, it won't survive in my zone 5 garden. But I am going to attempt to root a cutting, and if that fails, I'll be back at the plant sale in the spring for a replacement. 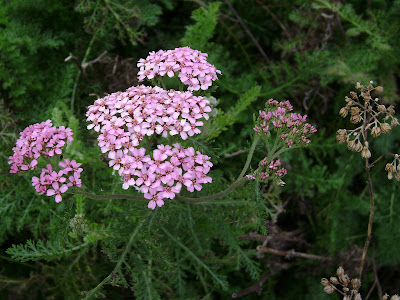 I guess I shouldn't be surprised by the new lush greenery and pink blooms of the Achillea, or yarrow. This is a tough plant that is one of the first to bloom in the spring and one of the last in the fall. 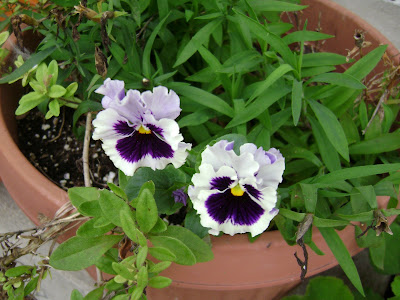 But I was surprised to see these little violas blooming in the pot of now-spent dianthus. Did I plant these in here last spring and they've come to life again? Or did I throw out the dead spring blooms in this catch-all pot? Sometimes there are advantages to being forgetful. 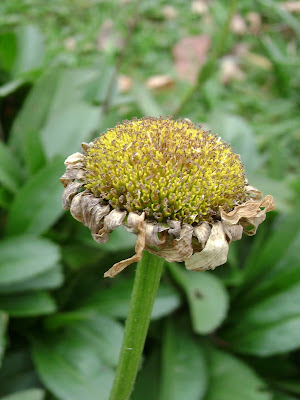 Yes, the season is winding down, and for the next few months, I'll have to use some ingenuity to come up with a Bloom Day post at all. I'll enjoy the garden for as long as it lasts, admiring the seedheads of the daisy "Becky" and discovering right next to these dried up blooms . . . 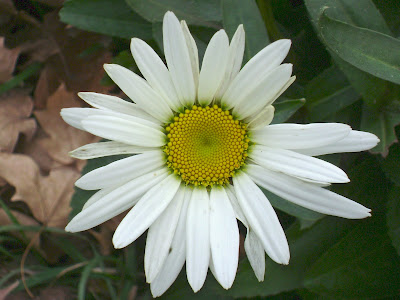 You may have noticed a common theme throughout this post--throughout my flowerbeds are leaves, leaves, and more leaves. 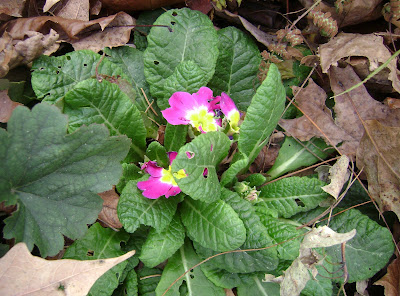 Sometimes, though, it pays to pull back a few of those leaves to discover a final surprise underneath--a few primroses are blooming again! This can only mean one thing--only a few more months until spring!
Garden Bloggers' Bloom Day is the brainchild of the always entertaining and energetic Carol of May Dreams Gardens. For more Bloom Day posts from around the world, be sure to visit her.