For years I dreaded this time of year--the first of August always meant that the start of school was not far away.  Oh, it wasn't that I didn't want to start another school year; it was that I usually had a long list of summer projects that hadn't been accomplished.  I don't have to worry about getting back into the work routine anymore, but I still don't seem to be able to complete all my summer plans.  The last few weeks of unbearable heat have meant little gardening has been done, other than dragging around the hose to try to keep everything alive.  Weeds are growing rampant and deadheading has been ignored.  And now that the temperatures have "cooled" off to a more tolerable mid-80's range, I have too many activities going on, it seems, to make much more than a half-hearted attempt at controlling my messy garden. 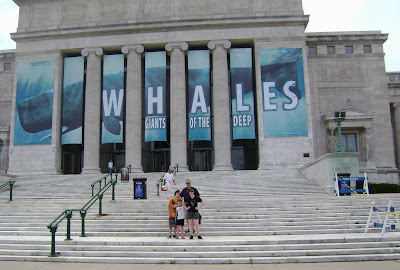 Nevertheless, it was time Grandma finally made good on a promise to the older three grandchildren to take them to Chicago for the day.  Their mother was away on business, but their dad--my oldest son--had time to accompany us as we headed north to catch the Metra for an afternoon of kid-friendly activities. 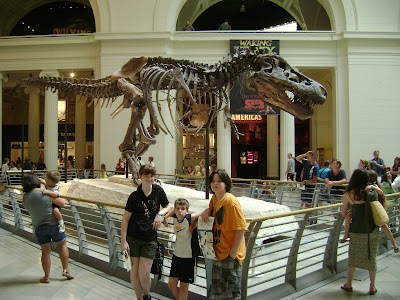 The younger two had never ridden on a train before, and all three were excited to see Sue, the most complete T-Rex skeleton in existence at our first stop, the Field Museum of Natural History. 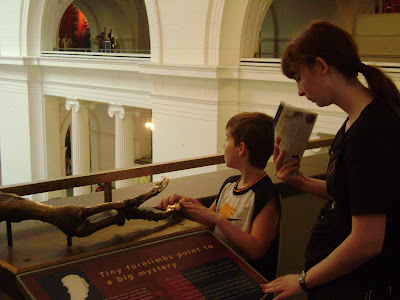 Younger Grandson was full of enthusiasm, proclaiming each new stop "the best ever"! 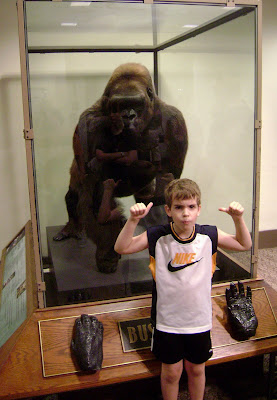 Here he gives us his best fierce gorilla impersonation. 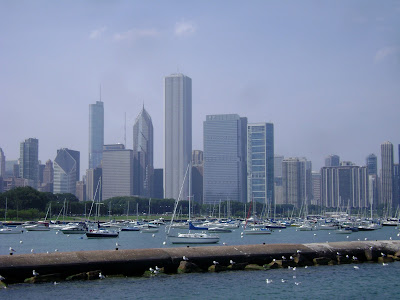 After a few hours of touring the Museum, we hopped on a water taxi with a great view of Lake Michigan and the Chicago skyline to head to Navy Pier. 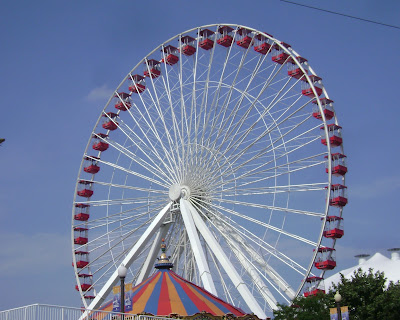 The kids and their Dad rode the ferris wheel while not-so-brave Grandma took a break. 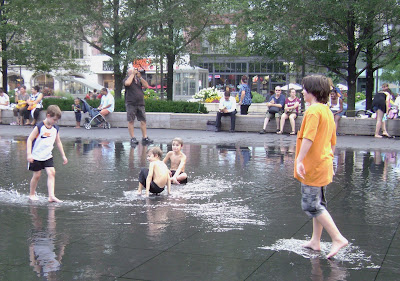 Of course, we would pick one of the hottest days of the summer to make our excursion into the Big City.  The two grandsons found the fountain near Millenium Park a great way to cool off before taking the train home. 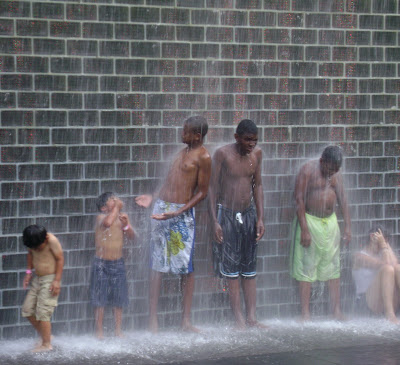 They weren't quite as brave as some kids, though.  I think this group found the perfect way to beat the heat:) 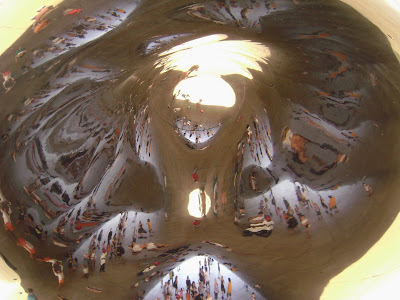 We had just enough time before catching the train home to visit a favorite spot of mine. Does this look familiar? 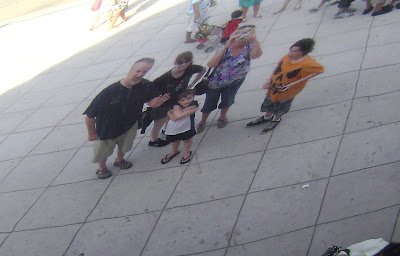 Maybe this will jog your memory, especially those who attended the Chicago Spring Fling two years ago. 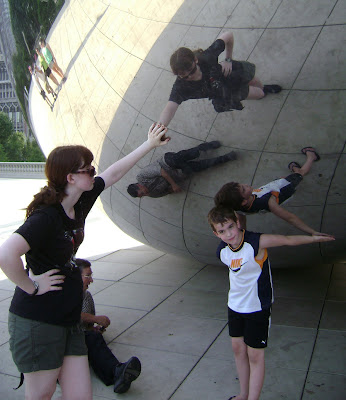 My son wasn't familiar with "Cloud Gate, aka "The Bean," but the grandkids quickly got the idea of its photographic possibilities. 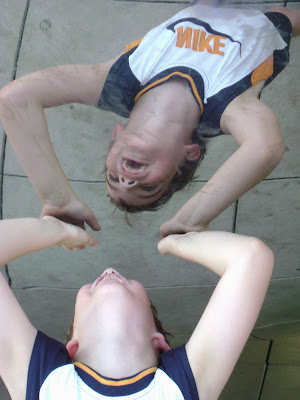 Youngest Grandson was  the most creative. 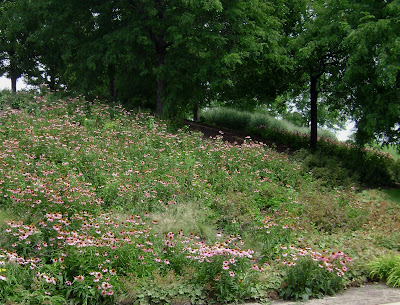 This was the grandkids' day, but Grandma found some other scenes to make her smile as we walked to our different stops. 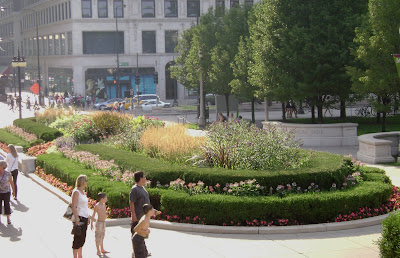 Whether it was a field of coneflowers on the way to the Field Museum or a formal planting near Lakeshore Drive, downtown Chicago provides a feast for the eyes for any gardener. 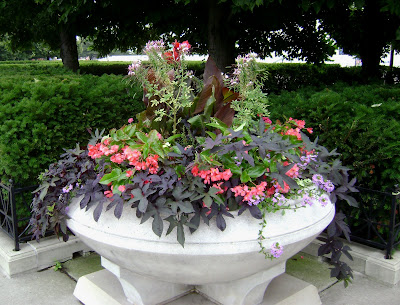 From large planters on the Museum campus . . . 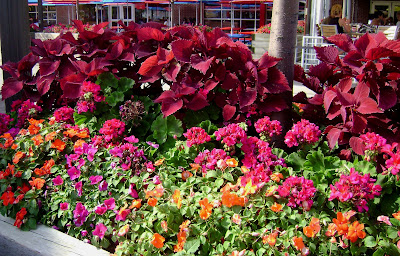 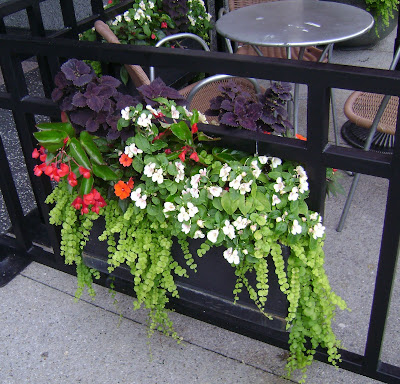 . . . to planters lining a sidewalk cafe, Chicago deserves praise for its landscaping. 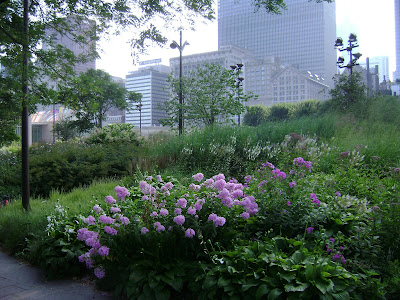 Although we didn't have time to stop to enjoy one of my favorite places, the beautiful Lurie Garden,  we did get a glimpse walking by on our way to "The Bean." 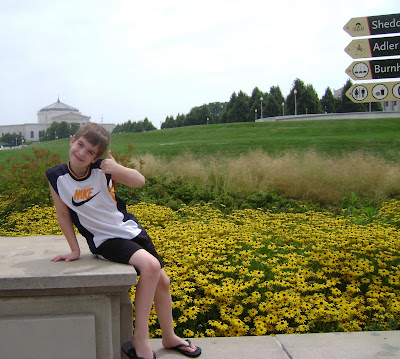 We had a great day, obviously.  The weeds and deadheading will be there for another day, but grandchildren are only young once!


Next week I'll be off to help youngest Daughter move back home.  I may be offline for awhile, but I'll catch up with all of you when I return.