It's been nearly two weeks since I arrived home from helping my daughter move back home, and I think the chaos has finally settled down somewhat.  There are still a few boxes that need to be unpacked, and there have been some adjustments in my routine, like having to share a bathroom once again and re-learning how to cook for three, not two--actually, I never was very good at cooking for just two anyway:)  Coconut, Daughter's Pomeranian, and Sophie have gotten re-acquainted, and Coconut enjoys sitting in the shade watching me garden just as Sophie does.  Even the newest member of the clan, Widget, Daughter's gray kitten, has finally decided Sophie is not as intimidating as she looks and has taken to exploring every corner of the house. 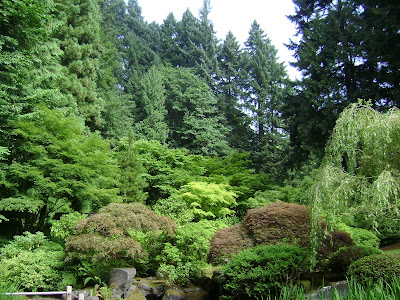 I've enjoyed my trips to Portland, Oregon the last two years to visit Daughter; it's such a beautiful and friendly city.  And despite the claims that the skies are usually gray in the Pacific Northwest, I've seen mostly sunny skies and enjoyed the moderate temperatures while visiting. But this trip was a working "vacation," and most of our time was spent sorting and packing and carrying endless heavy bags of unwanted belongings down a flight of stairs to the dumpster.  And then there was that long drive home . . .

Still, there was some time to have fun and enjoy some special moments with Youngest Daughter. 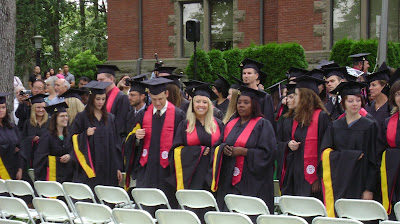 The main purpose of the trip, aside from helping to move, was to attend Daughter's graduation and to celebrate her receiving her Master's Degree.  The timing of this event meant I couldn't go to Seattle for this year's Fling. There will be other opportunities to meet other bloggers, however, but not so many opportunities to share milestones like this. 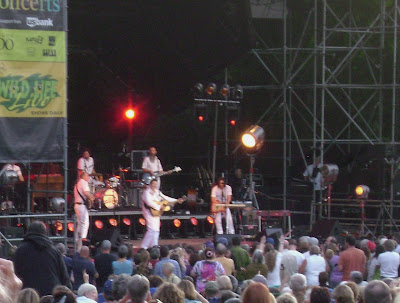 Daughter also made sure this was not an "all work and no play" trip. For my birthday earlier this summer she bought tickets for the two of us to see one of my favorite singers in concert--k.d. lang.  On a lovely summer evening, Daughter and I wound our way through the Oregon Zoo to an open arena where concerts are staged regularly and managed to find a few square feet in the packed lawn to lay down our blanket.  Regular lawn chairs were not allowed so as not to obstruct anyone's view, and I found myself shifting positions every few minutes to get comfortable until a kindly pair of ladies behind us, who preferred to stand, loaned us their beach chairs.  It was a great concert, however, and k.d. lang's velvety voice made the evening worth a little discomfort.
Portland also holds "Movies in the Park" throughout the summer, changing the locale each week, and we went to see "E.T.,"  a movie I was surprised to learn Daughter had never seen before.  It was shown in a small park in the heart of downtown that I soon discovered had a beautiful garden surrounding the open grassy area.  Coconut and I explored the gardens at one point, but by that time it was too dark to take any good photos. 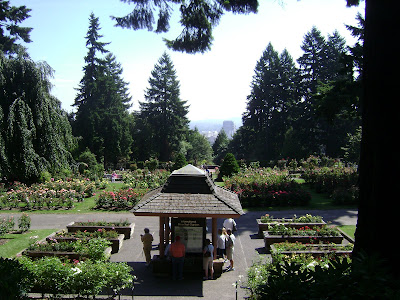 I have no idea when or even if I'll ever get to visit Portland again, so I wanted to make sure to visit two of my favorite places in the city one more time before leaving.  The last time I visited the Portland International Rose Garden was early last May before many of the roses were in bloom, but this time the garden was resplendent and full of the heady fragrance of all kinds of roses. 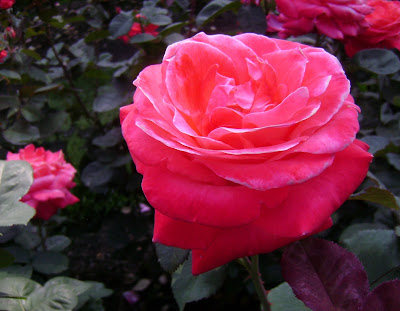 Portland's Rose Garden is a test garden and contains all kinds of roses. I talked to a volunteer who was tending one of the hybrid tea cultivars, and she mentioned that the roses weren't as full of blooms this year as usual because they had had so many overcast days.  I don't know, they looked pretty magnificent to me.  Seeing this 'Artistry' above made me want to re-think my reluctance to plant some tea roses in my own garden.. 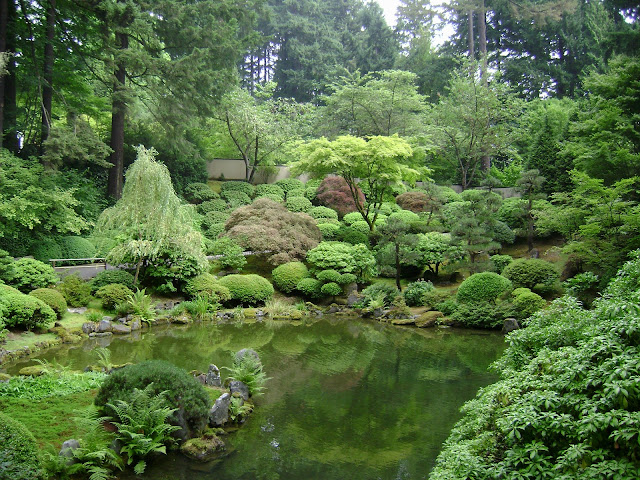 Near the Rose Garden is my favorite place in all of  the city.  There is something about a Japanese garden that always draws me in, and the Portland Japanese Garden is the most mesmerizing of the few I've seen.  Surrounded by the majestic Douglas Firs of the the Pacific Northwest, this garden is truly a sanctuary where one can forget the rest of the world for a while. 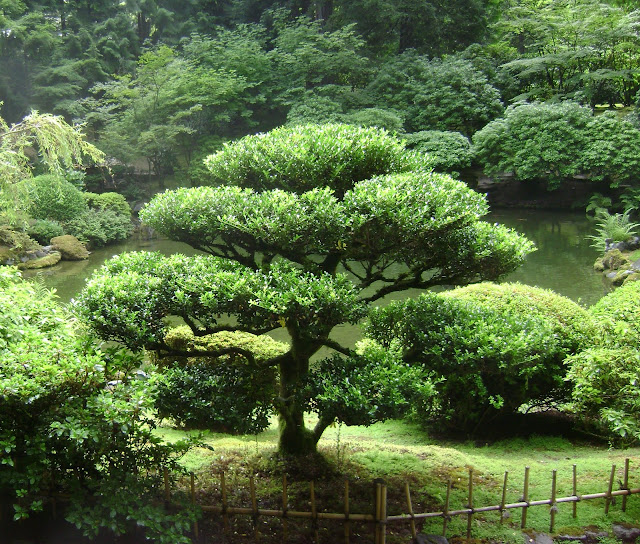 One day I would love to have a little Zen area in my own garden, but to have a true Japanese garden requires years of patience as evidenced by this carefully pruned tree. 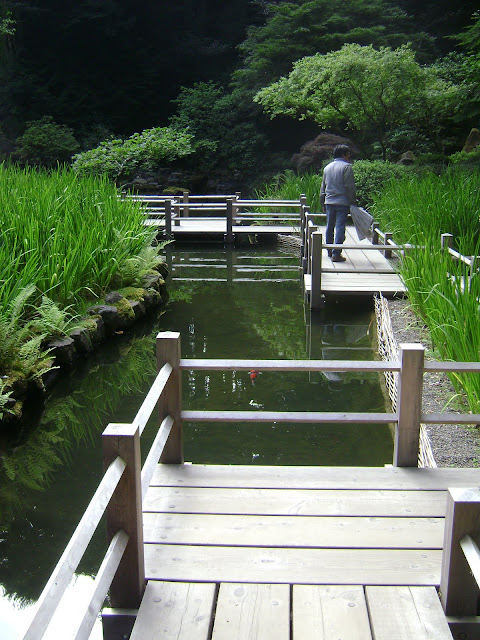 An authentic Japanese Garden contains several necessary elements, which you can read about in a previous   post here  if you wish.  The Zig-Zag bridge, surrounded by ferns and irises and taking you over a koi-filled pond, is one of the traditional details. 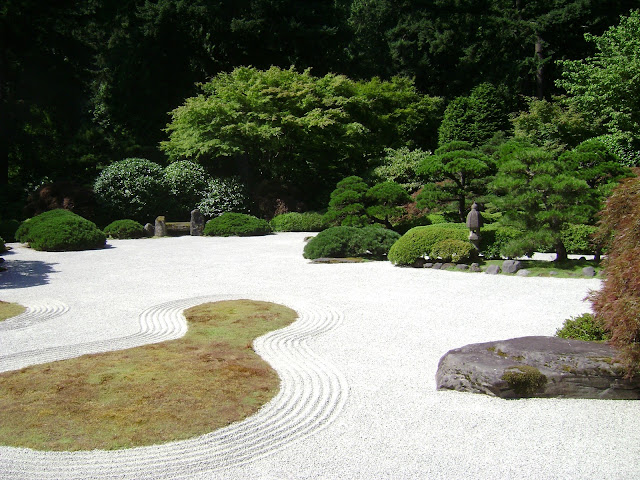 A Zen garden for meditation is another. 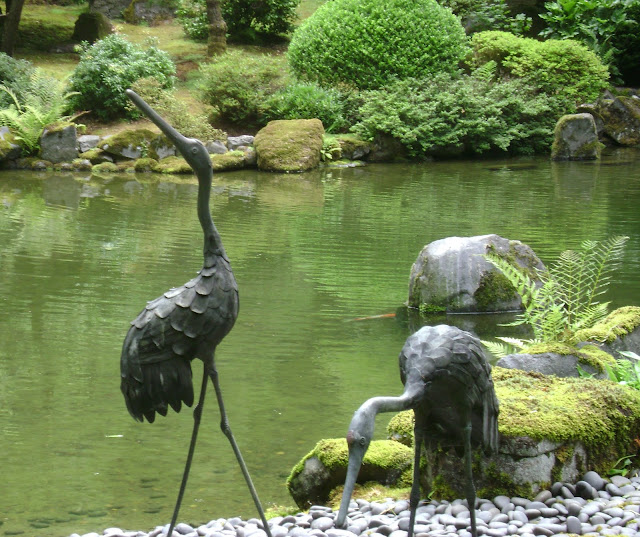 The element of water plays a primary role in a true Japanese garden. Statues of cranes, Japanese symbols of longevity and good fortune, grace one of the many ponds. 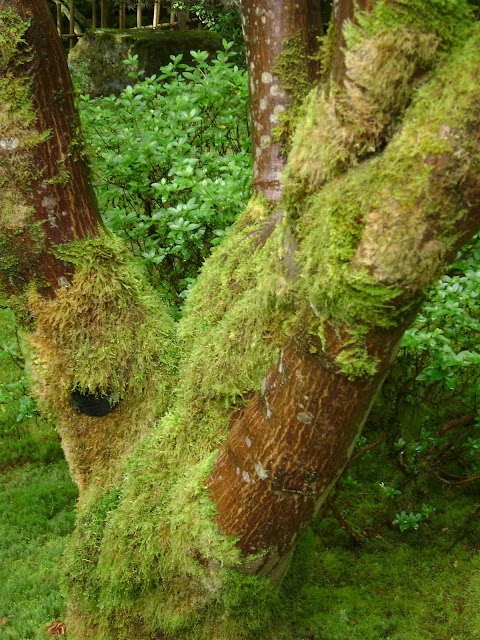 But you don't really need to know all the philosophy behind these gardens to enjoy the sense of serenity they invoke.  Walking down the hillside paths, you can find little surprises at every turn like this mossy tree trunk. 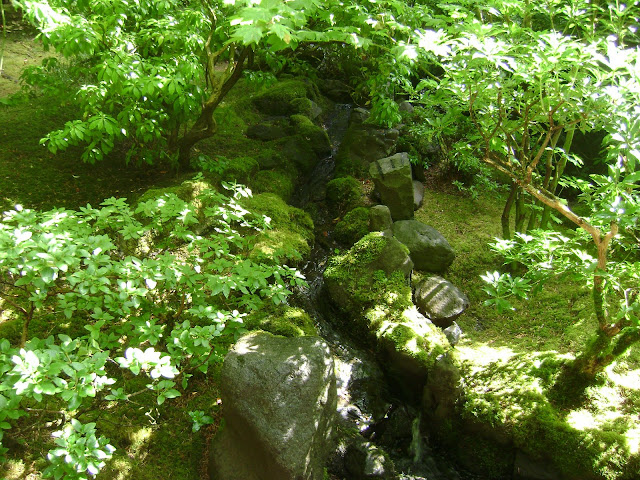 Or a small waterfall hidden among the shrubs. 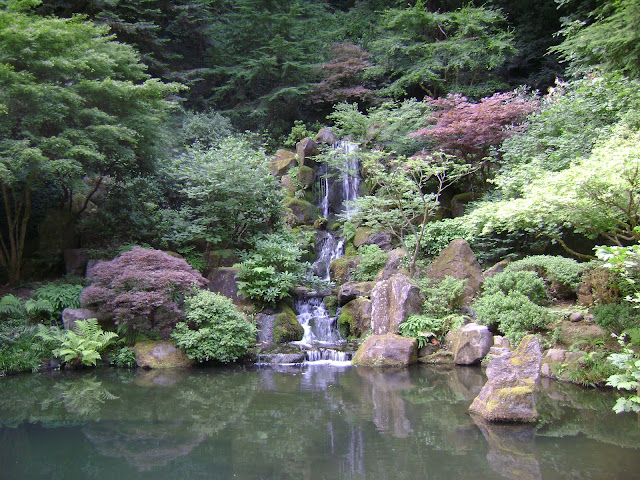 The most dramatic use of water is Heavenly Falls, which cascades down the hillside into a large pond.
I'm glad I got to visit the Portland Japanese Garden one last time; I left it feeling refreshed and calm, ready to begin that long journey home . . . 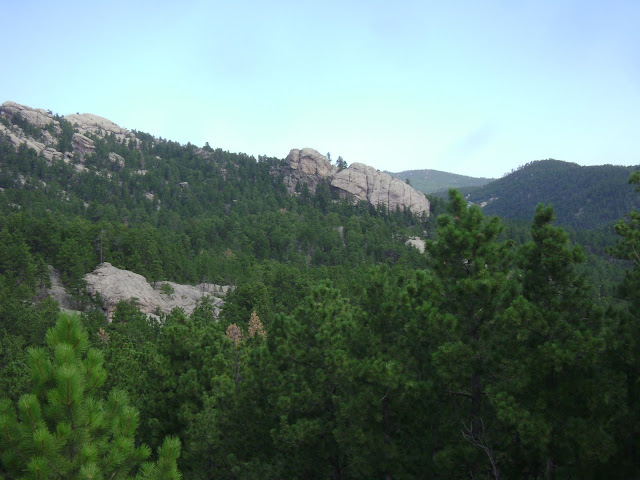 All too soon it was time to leave for our four-day drive home.  We weren't on a time schedule like the first time we drove out, but when you are driving with a cat and a dog in the car, there isn't time for dilly-dallying around. You can't leave them alone in a car while you stop to tour a museum or even for a sit-down dinner in a restaurant.  Besides, we wanted to get Coconut and Widget in their new home as soon as possible.

For this drive home we took I-90, the northerly route, and saw some beautiful scenery, albeit not always under optimal conditions.  I'm sure the Rockies were magnificent, but I could only see their silhouettes in the light of a full moon as we drove through them at night.  We drove past the northern edge of Yellowstone, and Daughter and I both regretted afterwards that we didn't take time to stop. 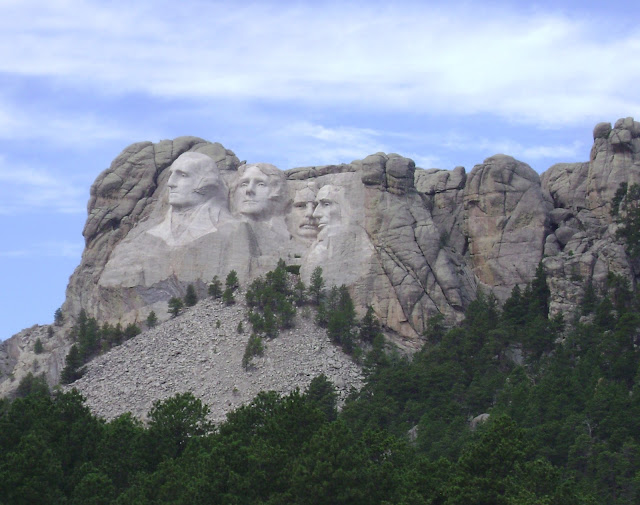 But we did take in one sightseeing stop which Daughter wanted to see and the reason for our longer route home.  Like so many well-known places,  Mount Rushmore is a monument whose size and magnificence can't really be appreciated until you actually see it. 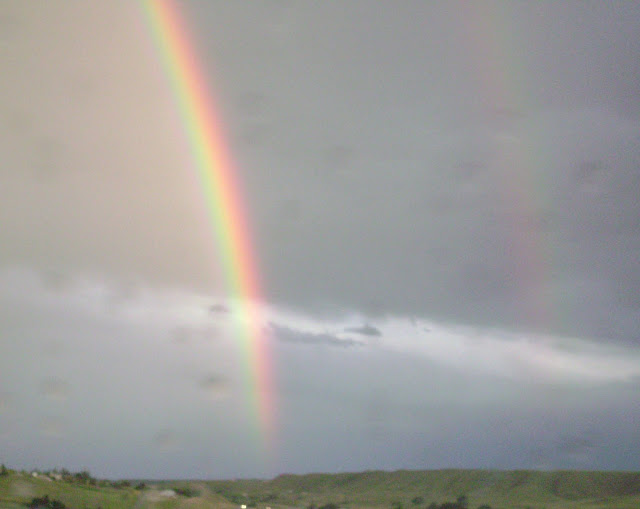 After a late start and some snags on the first day, including nearly getting stranded in Spokane, Washington until we had the car battery replaced, the rest of the trip was uneventful.   One evening, after passing through a rainstorm, Daughter and I both were excited to spot a double rainbow.  This photo taken through the car window is not that good, but this was the most amazing rainbow we'd ever seen.  Not only was it a double rainbow, but you could actually see both complete arcs. We took it as a good omen and spent the rest of our journey watching the wide open spaces of the West pass by until we reached the familiar scenes of farming country in southern Minnesota, then Iowa, and finally, Illinois. 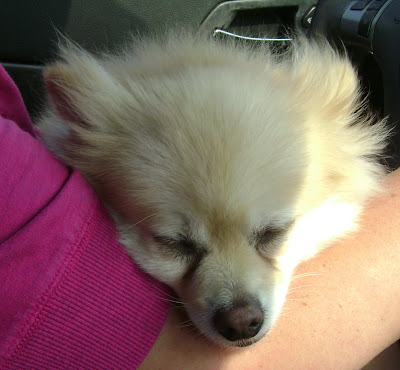 After riding in a cramped car for four days and eating way too much fast food, it was sooo good to be home.  By that time we were all tired puppies:)
Posted by Rose at 8:45 AM