Epic is an often over-used term, loosely applied to any movie with a "cast of thousands" involved in battles, or to books that are especially lengthy.  But the term epic can be accurately applied to Ken Follett's latest bestseller.  Fall of Giants has a broad setting, encompassing most of the Northern Hemisphere, and it involves the fate of most of the earth's inhabitants. While it doesn't have one great hero on a quest to save the world, it does have several characters who exhibit some traditional heroic qualities. 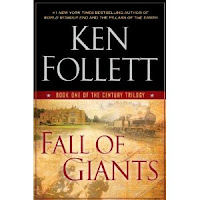 Giants begins in 1914 as Europe is poised on the brink of war. After attempts at peace-making fail, one country after another enters the war, impacting all of the major characters.  There are battle scenes, of course, but the most interesting parts of the novel involve the personal lives of the main characters  Their stories are intertwined, and Follett's technique of changing the focal character from one chapter to another makes the story faster-paced than one might expect.


Differing viewpoints on the war and social issues of the time are seen through the characters representing different countries:


I didn't realize how little I knew about WWI until I began reading this book.   The novel is not just a war story, however, as it also deals with some major social upheavals of the time, including women's suffrage and the increasing power of the middle and lower classes, especially in Russia. But as interesting as the plot is, it is the characters who fascinated me and kept me reading.  The book ends in 1924, with each of the characters at a pivotal point in their lives.  Fall of Giants is the first book of a trilogy planned by Follett; I'm sure I'm not the only reader eager to find out what happens to Ethel, Grigori, and the others as the years pass by.


I must admit I was hesitant to start reading a book that was nearly 1,000 pages long during the height of gardening season, and I didn't expect to finish it in time for this Book Club meeting.  When I read Follett's Pillars of the Earth a few years ago, it took me nearly 100 pages to get "into" the book.  But Giants had me hooked from the beginning, and it was a great way to spend those hot afternoons the past two weeks, curled up with a book in the comfort of my A/C.  I can't wait for the next in the series to come out!

I rarely see movies in the theatres, instead waiting until they come out on DVD.  But I will definitely be making a trip to my local multiplex in a few weeks to see The Help, which opens in theatres on August 10.  The movie is based on the bestseller by Kathryn Stockett, one of the best books I've read in recent years and one I reviewed here some time ago.  I can only hope the movie does the book justice; if you see the movie, be sure to read the book, too--you won't be disappointed.

After a few months' hiatus, I'm glad to be joining once again in the Book Review Club hosted by Barrie Summy .  Click here for more recommendations for summer reading.