After complaining all summer about the heat, I'm happy to report that we had three beautiful days at the beginning of this week with temperatures in the low 80's and cool, sunny mornings.   Of course, the heat is back again and seems intent on staying, but for three glorious days I finally felt like working in the garden--well, one day was spent with the three older grandkids, enjoying one of their last free days before school starts.  So make that two glorious days to get all the weeds pulled, flowers deadheaded, etc., etc. 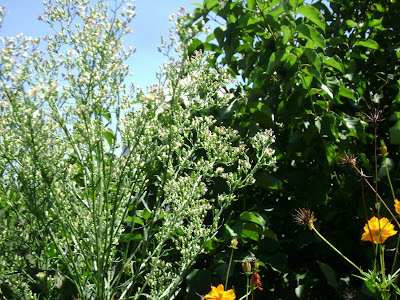 The first order of business was to start on the Butterfly Garden, which has turned into the Garden of Chaos this summer.  I was happy to see so many plants reseed themselves this spring, but it has meant my original careful plans for planting last year have been scrapped, and the volunteers have taken control of the garden.  To add to the chaos, I wasn't always able to identify seedlings.  Thus, flowers were inadvertently hoed out, and weeds were often allowed to stay.  The seedlings that grew taller and taller for the past few months found me scratching my head--were these weeds or could they be asters?  As it turns out, they were members of the aster family (what isn't??), but not desirable ones.  The tall plant at the left of the photo above towering over even the cosmos and Joe Pye weed is a horseweed, or as my Dad calls it, mare's tail.

Now the horseweed does have some rather pretty flowers, as you can see, but it is a weed after all, even if it is included in my Illinois Wildflowers book, so it must come down.  Armed with long-handled pruners--a machete would have been more useful--I tiptoed through the jungle of plants to cut each plant down. 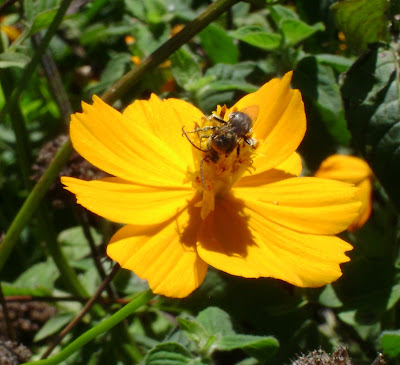 Two down . . . oh, look at this little bee feasting on the cosmos blossom.  Let's just put the pruners down for a moment and grab the camera, conveniently tucked inside my pants pocket. 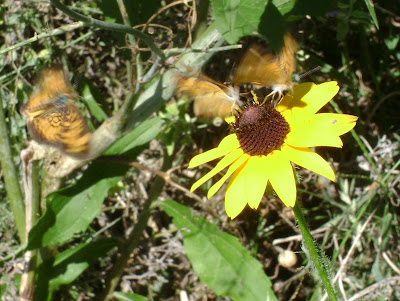 And what are these fluttering wings on the nearby Susans?  I think they might be Pearl Crescents, tiny little butterflies that I've never been able to photograph.  Be very still . . . 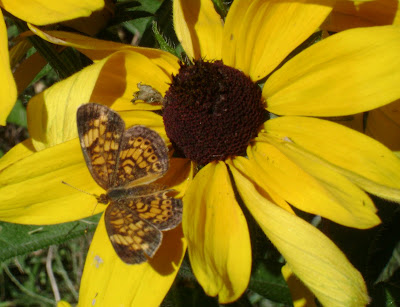 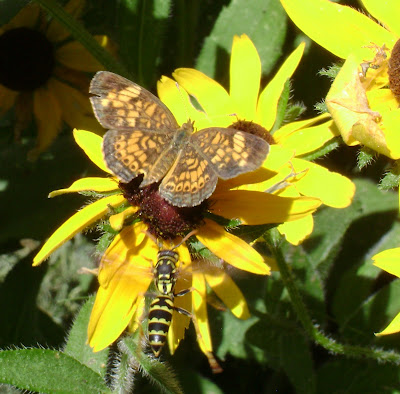 I think he must like me after all, to stay so still.  And look, he even has a friend . . . or at least I hope that's a friend, not some predatory wasp.  Fly away, little Pearl!

Ok, back to the horseweed on the other side of the garden and some other unidentified weeds . . . 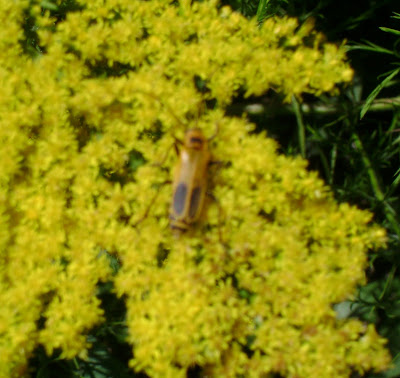 Still not sure if one weed-looking plant is an aster, but one mystery is solved.  Yes, this IS goldenrod, and it's blooming already!  I think this out-of-focus insect is a soldier beetle, often seen in my garden. Let's put the pruners down again for a moment and get some better pictures of the goldenrod. 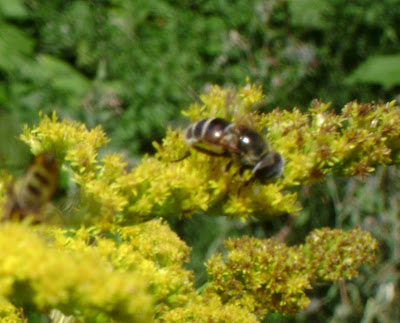 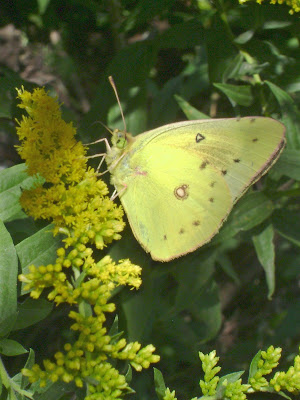 . . . as do the Sulphurs.  But then the Sulphurs seem to like every type of flower--there are literally clouds of them flying about every flowerbed I have. 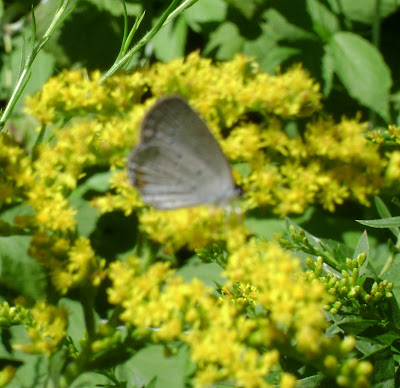 Oh, but wait!  This little butterfly is not so common, and I've never gotten a photograph of it.  I'm not sure if it's the Eastern Blue, but it looks very much like it.  I wish I could get a better picture, but it just won't stay still and it is so tiny. 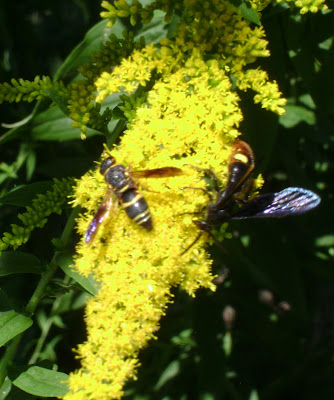 Wow, I didn't realize that goldenrod attracted so many creatures.  I'm not sure what either of these is, but the one on the left looks a lot like the cicada killer wasp pictured in my insect book. 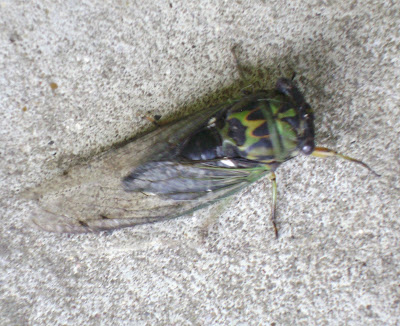 Perhaps it is looking for this.  The cicadas are thick right now, their loud song providing a sort of buzzing lullaby each night.

I seem to have lost interest in weeding . . . maybe I'd better go water some of the containers before the sun dries them out again. 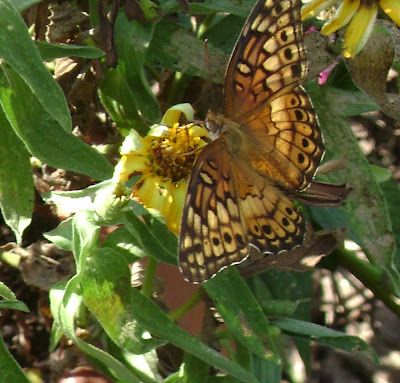 At least while I am watering, I can lock the hose into open position and put it down if I get distracted.  An orange butterfly has been eluding me for the past several minutes, flying away each time I put the hose down and get my camera.  I think it's a fritillary, but where did it go?  No, this isn't it--it's a butterfly I haven't seen before, and in fact, I have no idea what it is. Hmm, interesting. 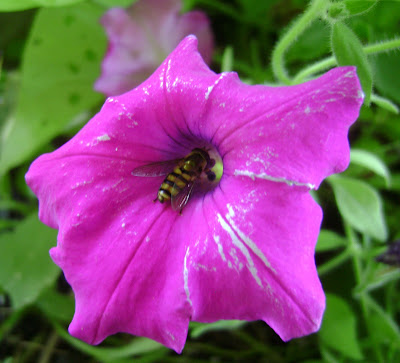 Put the camera away, Rose, and finish up the watering, for heaven's sake.  At least the porch planter won't be so distracting; the butterflies don't seem to like its shady environs as well.  Oh, but look at this cute little hoverfly burrowing into the petunia blossom. 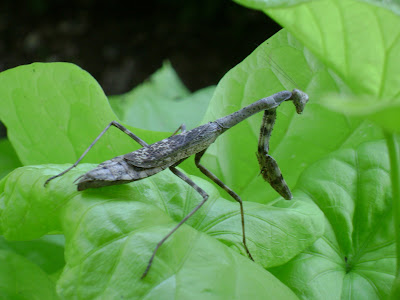 "Hey, aren't I pretty enough for one of your pictures?"
"Well, of course, you are, Mr. Mantis!  You know you're one of my favorite subjects, especially since you sit still so nicely for all photos."
Ok, the watering is done.  Time to get back to those weeds in the Butterfly Garden . . . 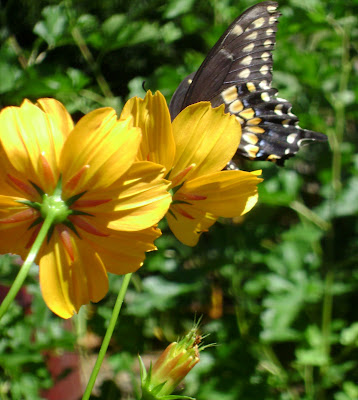 Oh, but I have to take just one little photo of this swallowtail on the orange cosmos!  I've been bragging about what great pollinator magnets these cosmos are, and what better example could there be than this.  Please, Ms. Swallowtail, could you move just a little to your right? 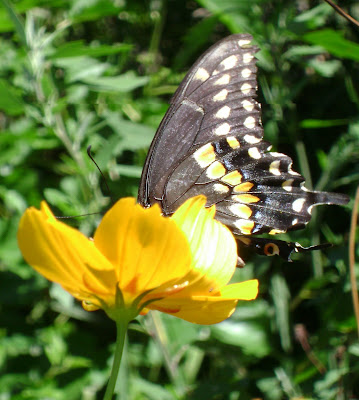 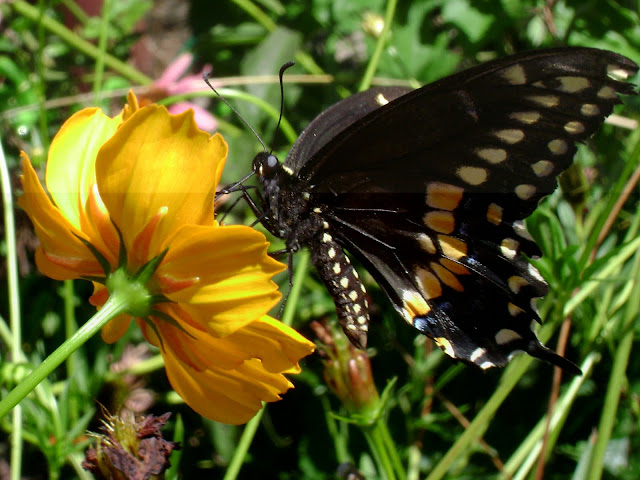 Ah, perfect!  Thank you so much!
Ok, the perfect photo has been taken; now it's time to get back to weeding.  But wait, it's lunchtime already, and then I might just have to take a little afternoon nap after working so hard all morning.
I just don't understand why I don't seem to get much done in the garden:)
Sending wishes for a Happy 85th Birthday to my Dad today!
Posted by Rose at 5:00 AM