Three Wildflowers for Wednesday and Thursday 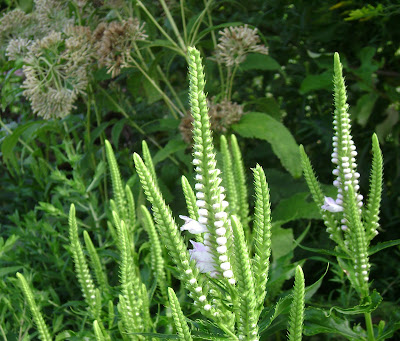 It's time for Wildflower Wednesday once again, a monthly discussion of wildflowers started by native enthusiast Gail at Clay and Limestone.  Two years ago I couldn't tell the difference between a cup plant and a compass plant, so it has been an enlightening and enjoyable experience to learn about wildflowers from Gail's and now others' posts.  I have become more aware and curious about the plants growing freely around me and have begun to do some research on my own to learn more about them.

I didn't have to look far, though, to find three choices for today's posts--all of these are blooming in my garden right now: 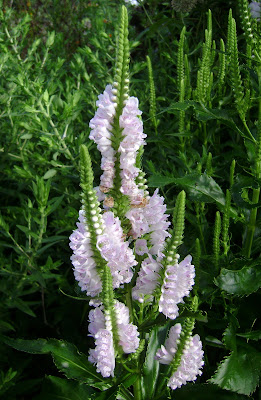 This is the first year for blooms on my Physostegia virginiana, otherwise known as 'False Dragonhead' or 'Obedient Plant.'  A member of the mint family, Obedient Plant has single-branched stems that can grow up to 4 feet tall. The flowers are tightly clustered in long spikes at the top of the stems.  Blooms are usually rosy pink or purple, especially in cultivated forms, while the native wild forms are usually white with some pink or purple tints.  The name 'Obedient Plant' comes from the flowers' tendency to stay in the same position, even if moved to the side.  'Obedient Plant' is pollinated by bees and visited by other insects and hummingbirds. 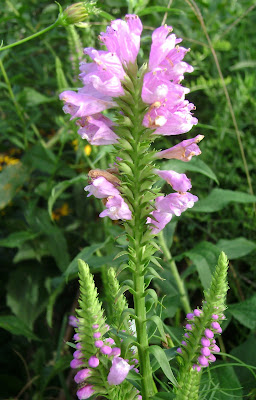 Neither of my sources* mentioned that this is an aggressive spreader, other than in moist sites, but I can attest to the fact that it does spread rather easily.  Last year I planted one lone plant, purchased from the local Prairie Plant Society.  Before it grew much past two feet tall, a rambunctious Sophie knocked it over and  broke off the stem.  I thought that would be the end of it, but apparently it had had time to set some seed because this year I have a whole cluster of Obedient Plants at the back of my Butterfly Garden, as seen in the top photo. 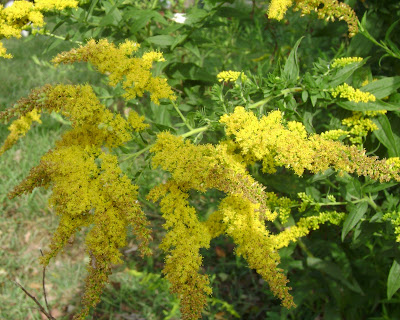 Also blooming at the back of the Butterfly Garden right now--and behind the barn and the sheds, next to my compost pile, and pretty much anyplace with undisturbed soil--is the native Goldenrod.  This is not your neat, dwarf cultivar, but  probably  Solidago Canadensis, or Canada Goldenrod, a native perennial common throughout Illinois, despite its Canadian name.  This wildflower can grow up to 7 ' tall; its hairy stems are topped with flower heads arranged in a pyramidal cluster on the upper side of the branches.  Blooms last for about three weeks from late summer to early fall. 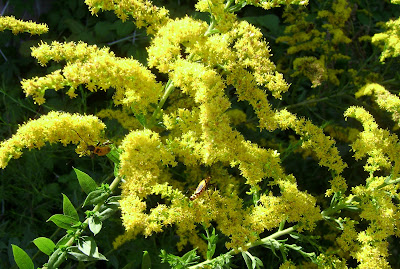 Fortunately, more and more of the public is now aware that Goldenrod is not the allergy culprit it was once accused of being.  In fact, Native Americans used to make a tea from it to treat kidney problems and chewed the crushed flowers to treat sore throats.  A wide variety of insects are attracted to this plant, including species of wasps and flies who play an important role in insect control.  Several species of birds as well as deer and rabbits are also attracted to Goldenrod. I found this out for myself while taking pictures for my last post--each plant was full of bees, butterflies, and other insects. 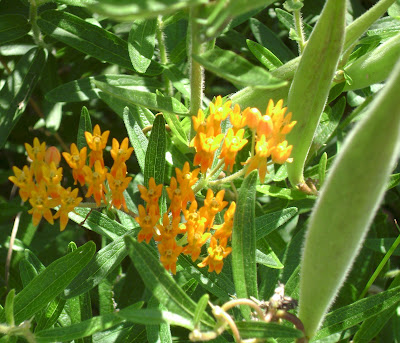 And now, since tomorrow is Cindy's "Three for Thursday" and I usually don't post two days in a row, I hope you don't mind that I do double duty here by adding a third wildflower for Thursday as well.  Asclepias tuberosa, or 'Butterfly Weed,' is a native perennial and one I know most of you are familiar with.  As its name implies, it is popular with butterflies, especially the Monarch, which is why I planted it.  The larvae consume the leaves, and the adults feed on the nectar.  I've never been able to photograph a Monarch on it, but I have seen them sipping the nectar, and evidence can be found of their feasting by the chewed off stems.  It also attracts long-tongued bees and hummingbirds.

Once called 'pleurisy root,' because it was considered a cure for pleurisy, Butterfly Weed was also a favorite of some Native American tribes, who used it to treat a host of physical ailments. 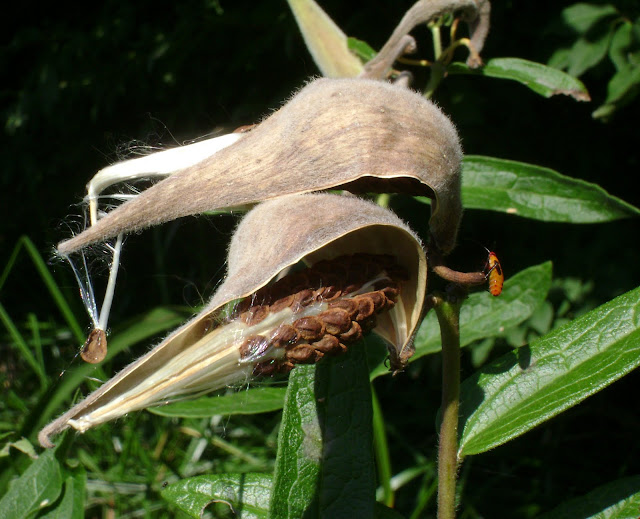 Asclepias tuberosa lacks the milky latex sap typical of other members of the Milkweed family, and is the only orange milkweed in Illinois.  While the orange blooms have provided a lovely display in my garden all summer,  its fall appearance is pretty cool, too.  Vertical seedpods develop atop the plant, as seen in the previous photo, and then open, displaying the seeds.  (I just had to enlarge these last two photos because i thought they were so cool:) Notice the milkweed bug to the right center of the photo.) 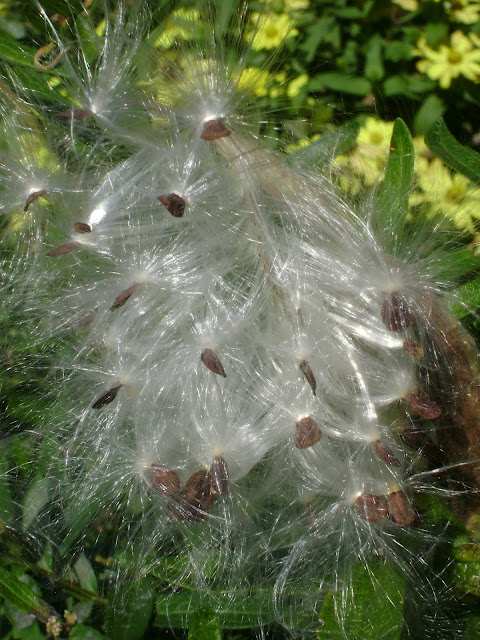 When the seed pod is ready,  a host of seeds attached to silky threads burst forth, ready to be scattered by the wind.  I really should collect some of these seeds before they spread to who knows where.  Butterfly weed is so easy to grow, though is slow to develop and may not survive the winter if a young plant's taproot is planted too close to the surface.  Although I learned this from my sources, I also learned it through experience.  A few years ago I planted two in my roadside garden; only one survived.  Last year I planted two in the Butterfly Garden; only one survived.  But both plants have really taken off this year, the older one in particular, and for me, they are as appealing for their aesthetic value as for their butterfly magnetism. Definitely a plant to include in your garden plans!
*All specific information here comes from two of my favorite sources: Illinois Wildflowers, by Don Kurz, a book I checked out over and over again from the library last summer until I finally broke down and bought my own copy, and a website, Illinois Wildflowers, a source I've noticed that even Gail and others have also used.  Even if you're not from Illinois, you will find both of these sources very useful.  The book has excellent information, accompanied by color photographs of nearly 400 species of wildflowers in the Midwest. My favorite feature of the book is that it is organized by color of blooms, which is certainly useful when you see a wildflower and can't identify it.  The website is also well-researched with color photographs, usually more than one of a plant.  The only problem I have with this website is that the index is organized by botanical names, which makes it a little difficult if you can't identify the plant in the first place.  But if you can determine the botanical name from somewhere else, it is a wealth of information.  And be sure to check out the photographs--almost all were taken in East Central Illinois, in locations very near where I live!
Check out other Wildflower Wednesday postings at Gail's site, and why not join in next month?
And tomorrow, be sure to check out Cindy's creative "Three for Thursday" post!
Posted by Rose at 8:48 AM