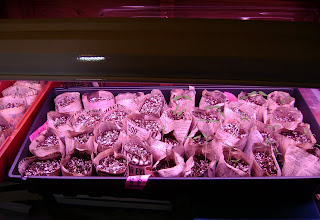 A month ago or more I received an e-mail from a blogger I'd never visited before wondering about the seed starting project I discussed last spring and whether I had published my findings.  Oh for shame!  What kind of researcher proposes a project and even contemplates government funding for it, but then never publishes her results?  Although I rejected the idea of asking for a public handout to support my research, I did want to share my findings with anyone interested for the general betterment of gardens everywhere.

If you missed my initial research proposal on starting seeds indoors, you can click here.  Or if you're short on time, I'll give you a brief overview.  After two years of less than successful results with indoor seed starting, I decided to document the various factors involved, in an attempt to determine how one might achieve more success in growing seedlings indoors.  Light, temperature, and potting mediums were all variables that were studied.  Unfortunately, by the time I had planted all my seeds and moved seed cells around to share light, the control groups were so mixed up that instead of Groups A, B, and C, I wound up with groups that could be more accurately called AC/DC or CRAP.   As if that wasn't bad enough, I used pieces of cardstock as labels which disintegrated after several waterings, and soon I wasn't sure if I was growing salvia or gaillardias.  (My son saw my set-up of trays under shop lights in the basement one day and was worried Mom was growing something else:) )

The end results were better than in past years, but still rather disappointing.  Some seeds didn't germinate, and of the many that did, some didn't seem to grow past a certain point.  But most discouraging was the fact that many of the seedlings that did survive eventually grew leggy and didn't survive transplanting.  If anyone has suggestions on tips for the final stage of seedlings, I would appreciate it.  One bit of good news--no damp rot this year!


The main reason I have waited so long to share my findings with you is because I wanted to see how the plants fared after some time in the garden.  So here are a few of my successes; 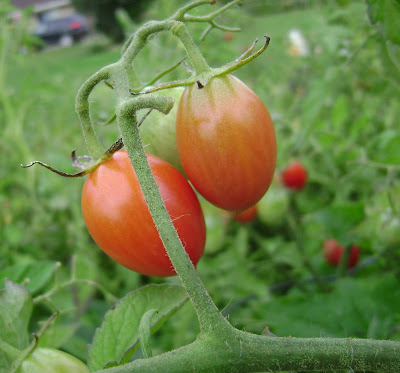 The tomato plants did very well, but I was disappointed that the seeds from 'Sugary Grape' did not germinate at all.  But wait--I do have grape tomatoes!  Not sure what happened here, but all the tomato seedlings looked alike to me. 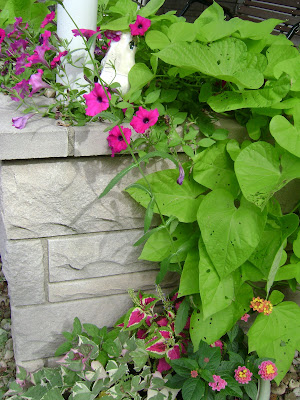 'Victoria Blue' salvia, a favorite annual of mine, grew well with its start on the heatmat.  But a funny thing happened when I planted it--can you see it at the back of this planter?  No, and it's not just because it's a bad photo--the tall stem whose bloom is cut off in the photo is not salvia, but Verbena bonariensis!  Planted in several pots instead of the missing salvia, it adds a little more vertical interest than I had intended. 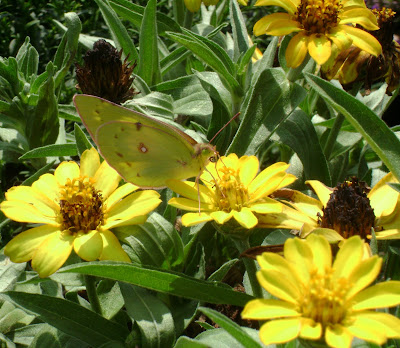 And those Zahara zinnias I drooled over in the catalogs last spring--'Starlight Rose'--somehow turned into Profusion Yellows!   The butterflies don't seem to care, but I'm still wondering what became of the 'Starlight Roses.' Obviously, proper labelling is one variable that needs to be corrected if this project is to be attempted again.

But the worse case of incorrect labelling has to be the seedlings I shared with friend Beckie.  I was so proud of the gray-headed coneflower seedlings I started and shared a few with Beckie, informing her that this native flower was so quick to germinate and surely would be easy to grow.  I began to have my doubts, though, a few weeks later when I noticed some similar seedlings beginning to grow in my vegetable garden.  Yes, you guessed it---the coneflower seedlings were actually . . . 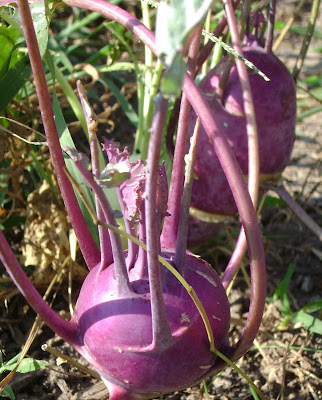 Kohlrabi!
Now, seriously, the kohlrabi, 'Crispy Colors Duo'  from Renee's Garden and the gray-headed coneflowers were a last-minute planting indoors, and I know I labelled them right.  I'm beginning to believe Carol's garden fairies have been visiting my house . . .


Seriously (or maybe not), here are some of the things I learned from this year's seed starting project: Just a portion of one day's tomato harvest this past week.
1. Tomatoes are very easy to grow from seed.  That being said, I probably won't start any tomatoes again next year, unless there's an heirloom variety I really want to try.  I'm just too cheap frugal a person to make myself throw out excess seedlings, and I don't want 20+ tomatoes of the same variety again next year.

2. The newspaper pots inspired by Fairegarden seemed just the right size and worked quite well, especially since growing seedlings could stay in them until time for transplanting.  Since the investment has already been made in the wooden pot maker, this means no money needs to be expended on peat pots or trays with cells next year.  And I'll be recycling besides!

3.  Seeds started indoors need daily attention.  If you can't find the time for a few minutes of misting or monitoring the seedlings every day, then don't even bother planting them.  All it takes is one day or two for a seedling to dry out, and then it's a goner.

4. Related to #3, do not plan to take a one-week trip to Portland, Oregon to visit your youngest daughter and leave seedling care up to Mr. I-Don't-Care-About-Flowers-Just-Tomatoes.  To be fair, he did try, I think, but I'm not sure he remembered them everyday.

5.  And related to #4,  do not assume because the month of April was unusually warm that May will be the same and put all your seedlings outside to make watering easier for Mr. IDCAFJT.  Naturally, we had a couple nights of frost while I was away, and although I had placed a blanket within easy reach on the porch which Mr. I did use, some of the seedlings still died, though whether from frostbite or suffocation, I'm not sure.

6. Finally, LABEL, LABEL, LABEL all seeds with permanent markers!  Heavy paper or cardboard just doesn't cut it after being watered several times.  I'm still looking for something small and more durable next year; any ideas would be appreciated.  I'm thinking of using toothpicks with duct tape, kind of like little flags--what do you think?


At last!  I hate to have unfinished projects lying around, so it's such a relief to finally have completed this one.  Although completion of this project was unavoidably delayed, at least you can be reassured that none of your hard-earned tax dollars were used to fund this study.  However, I am thinking about looking for a little part-time work--do you think I can put research project coordinator on my resume??
Posted by Rose at 5:00 AM