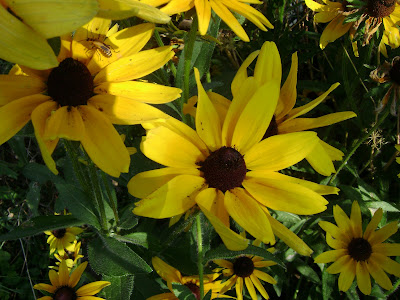 It's time for another Garden Bloggers' Bloom Day, the day each month when we show off what is blooming in our gardens.  I've noticed lately that there seem to be two distinct camps among garden bloggers--those that have the "I'm sick of the heat, and I don't feel like getting all sweaty and fighting mosquitoes in the garden, and I'm almost too unmotivated to blog" attitude, and those that have the "It may be hot, but look at these lovely blooms that thrive in heat, and aren't you glad it's not winter?" attitude.  I'm afraid I belong to the first category, but for today only I'm going to try to take the high road and look positively at what is blooming in spite of the heat, the lack of substantial rain, and the inattention of the lazy head gardener. 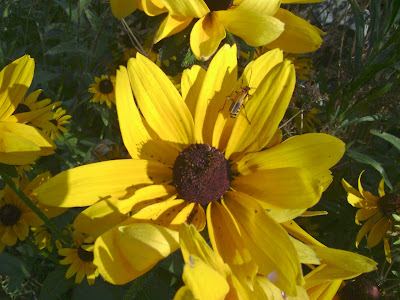 The purple coneflowers may be fading and looking rather tattered these days, but the Black-eyed Susans are still going strong in the butterfly garden, attracting all kinds of creatures.  It's hard to believe that these cheery faces didn't exist in my garden until last year. 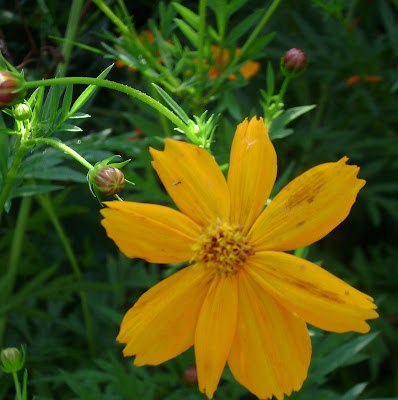 The butterfly garden really is a garden of chaos this year.  So many plants re-seeded themselves, like this cosmos, that it was hard to weed until I knew for sure what each seedling was.  I pampered some very tall seedlings, as I racked my brain to think what they were, only to discover eventually that I had cultivated some fine examples of mare's tail, or horseweed.  Not a good thing. 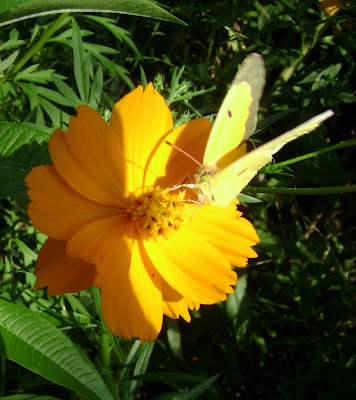 The emerging leaves of 'Cosmic Orange' cosmos, from seed from Tina, were also originally mis-identified, but fortunately were left alone until their unmistakable blooms appeared.  These are also happy self-seeders, and the pollinators love them. 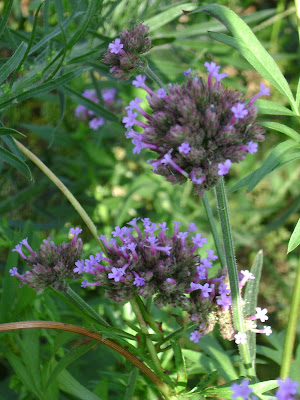 This is the first year for a successful planting of verbena bonariensis, but judging by how well they're doing this year, there should be a vigorous re-seeding of these next year as well, which makes me happy. 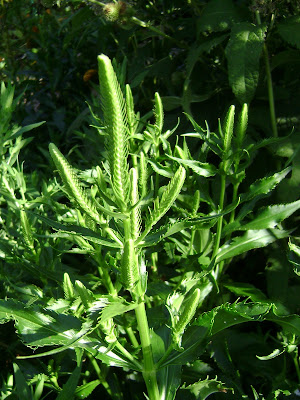 One plant that is not blooming is the Obedient plant.  I was really disappointed until I looked up information on this native plant and discovered that it doesn't bloom until late summer or fall.  I hope that's true, because I have a throng of these plants, all from one little plant that was knocked over by Sophie last summer before it ever had a chance to bloom.  With luck, maybe all of these will finally bloom in time for Wildflower Wednesday later these month. 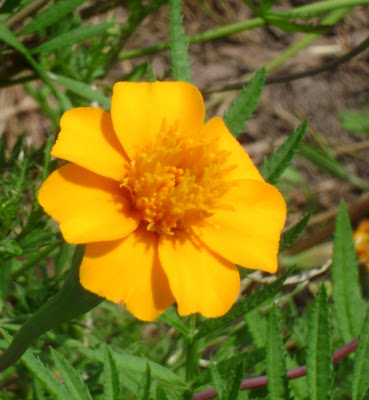 What little energy I've had for gardening lately has been spent on the vegetable garden, where tomatoes are ripening so fast they need to be checked every day.  Often overlooked here, though, are the modest blooms of marigolds, planted to keep pests away and to camouflage the weeds that were sure to grow behind them.  These are either "Golden Guardian," a seed I purchased, or seeds from Frances in the seed swap this past winter, or maybe both . . .  Breezy mornings have made it difficult to photograph anything other than a single bloom held steady by the photographer. 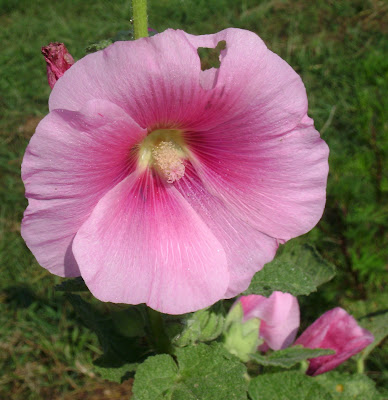 Also in the vegetable garden, a lone hollyhock stands sentinel.  Two weeks ago I lamented the lack of hollyhocks this year, but several sprang up in unwanted places and were weeded out.  This one escaped the hoe, fortunately. Other than that strange cutout near the top, it's a perfect pink specimen. 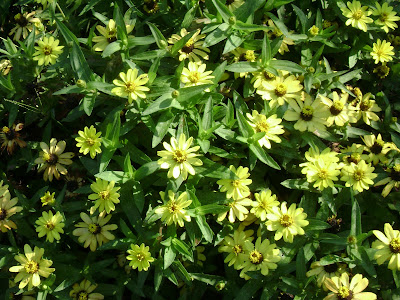 I also lamented earlier the lack of tall zinnias that usually are the highlights of my August garden.  Still no sign of them, so these smaller, but floriferous 'Zahara Yellow' zinnias will have to do.  This is a bit of deja vu--I showed a similar photo of these in July, but hey, you've got to love any plant that blooms so long and does so well in spite of one of the most continuously hot summers in memory. 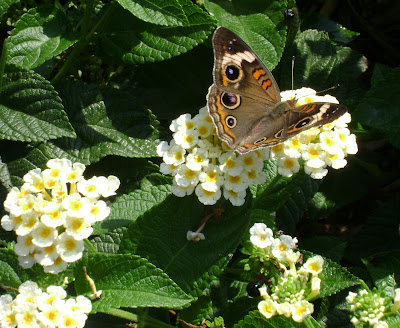 Also worth repeating is this photo of  'Lucky Lemon Creme' lantana, this time, though, with a new friend also enjoying it.  I've mentioned before that this has been a banner year for butterflies, with the number of species seen as amazing as the total number of butterflies.  While June saw flocks of Red Admirals, swallowtails and Buckeyes are the most numerous right now.  Buckeye sightings are usually rare in my garden, but this August dozens can be found in my garden. 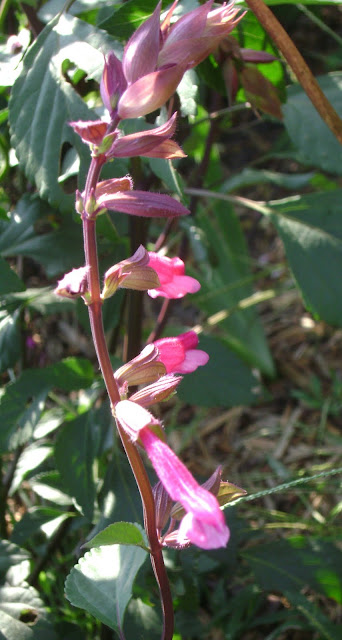 I wish I could show you just one good photo of a plant I've been so happy with--Salvia 'Wendy's Wish.'  But every time I try to photograph it, my camera focuses on something else nearby, or a breeze sends the blooms waving in the air, both resulting in blurry photos.  This less than satisfactory photo will have to do for now.  Similar in color intensity to Salvia 'Black and Blue,' but hot pink as you can see, this plant has been so much more robust than 'Black and Blue' was for me last year.  It's definitely a keeper, but I'm afraid it's probably an annual in my zone 5 garden.  So I'm going to try to collect some seed; if not, I do hope the garden center stocks this again next year. 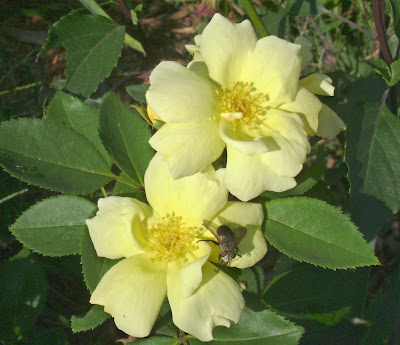 Also keepers are the two 'Radsunny Yellow' Knockout roses planted this year in the new lily bed.  Now that the Japanese beetles have diminished in number, they are putting out new blooms once again. 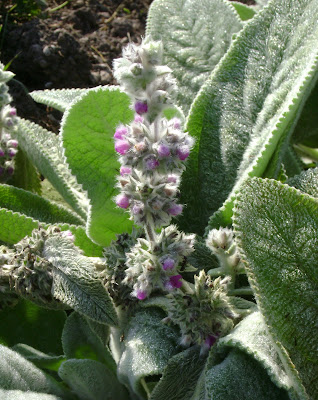 Now here's a bloom I know I've never shown before.  Some people prefer to snip off the blooms of Lamb's Ears, but I think they're kind of cool. 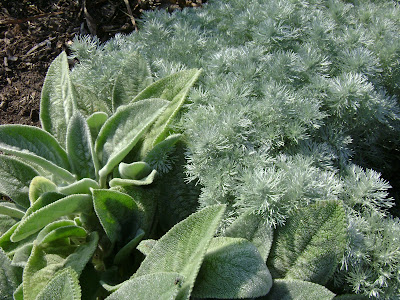 Knowing that the daylily blooms would be a transitory show, I wanted to add some plants that would have all-season interest.  Lamb's Ears and silvery Artemisia, planted at one end of the lily bed, fit the bill perfectly. But the best part about these plants is not what you see, but what you feel.  It's hard to walk by these two without running your hand over their soft foliage. 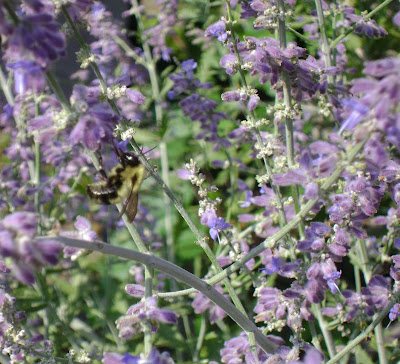 Like a child with a new toy, I have given the most attention this year to the new lily bed.  The front garden, the first garden I planted, really needs a makeover and isn't very photogenic right now.  Nevertheless, the pollinators still are pleased with it, including this bumble enjoying the Russian Sage. 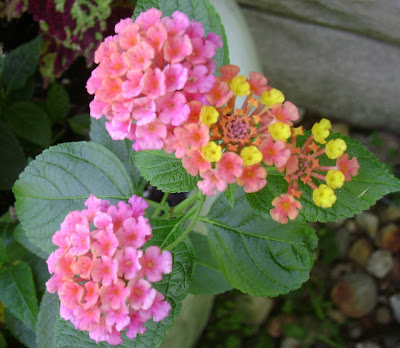 Watering has been a constant chore since early July, and about the only chore I've been diligent about.  As a result, most of the containers are still looking good, especially the ones in the shade.  This lantana, name forgotten, planted with a coleus and tri-color ipomoea vine would probably do better in full sun, but it still adds a bright spot in a shady area out front. 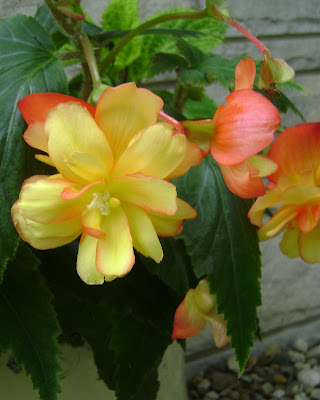 My favorite plant in the shady containers are the two Illumination Begonias I was thrilled to find this spring.  I found a yellow one like the one I had two years ago, but I couldn't resist also buying this Apricot Illumination.  The blooms start out a deep apricot, then turn to more of a lemony yellow as they mature.  This photo doesn't do it justice, but trust me, it's a beauty.  And every time I look at it, I will always think of Flydragon, who shared my love of Illumination begonias.  Though she lost her courageous battle with illness last year, her witty posts will always be remembered. 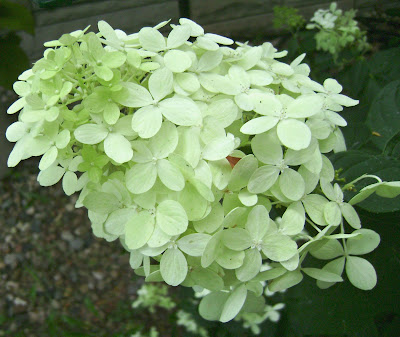 Another current favorite is the 'Limelight' hydrangea just coming into its own.  Planted in the fall of 2008, this plant has exceed my expectations, growing to nearly 4 feet tall this year and just as wide.  I wish I could get a decent photo of the whole plant, but this single blossom will have to do for today. 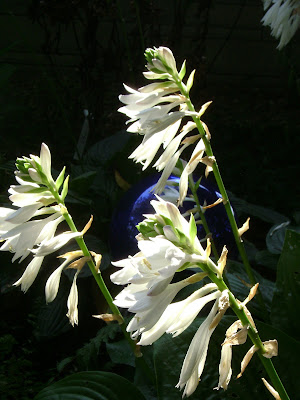 The shade garden is definitely feeling the effects of the continued heat and lack of rain.  The "sea of lamium" has dried up, and I think I may have lost a couple of heucheras.   Oh, sorry to slip into my negative mode there; I was going to stay positive today, wasn't I?  Well, then, let's just end by looking at these lovely hosta blooms.  Just when I thought the hostas were done blooming and ready to go into dormant mood, these suddenly appeared on what was labelled a 'Sum and Substance' (though with much darker green leaves than my known 'S and S').  Another hosta is also sporting some buds, so the shade garden still holds some surprises for the season.
And best of all, the weather forecast is for a reprieve from the heat for the next few days--woo hoo!  Maybe I'll stop being the neglectful gardener and finally tidy up the garden this week.
To see what else is blooming in August across the country and around the world, be sure to visit our always motivated hostess, Carol of May Dreams Gardens for the monthly meeting of Garden Bloggers' Bloom Day.
Posted by Rose at 10:58 AM