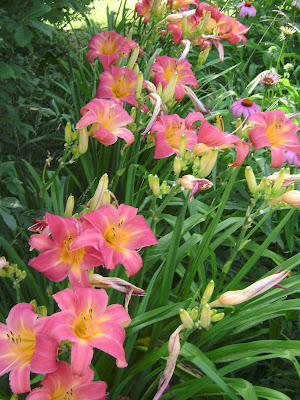 One of the negative side effects of joining the garden blogging community two years ago has been a serious case of plant envy.  Many new plants have found their way into my garden after seeing them on someone else's blog.  But no plant has captured my heart and imagination as much as the various types of lilies, especially the daylilies, Hemerocallis.  Several new plants have been purchased in the past year, and a new flowerbed was even completed this spring just to showcase some of the newer acquisitions and to make room for future purchases. While I'm eager to show off the different lilies that have bloomed here since mid-May, today's post as is much for me as anyone else: following Tina's lead, I want a record of all the names and locations of my lilies for future reference. 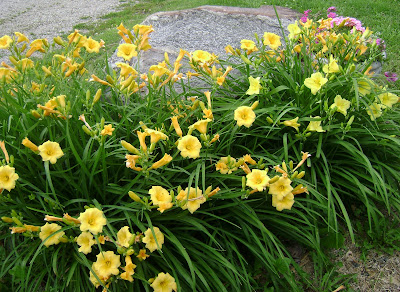 In the beginning, there were the Stella d'Oros, and like the inhabitants of that very first Garden, they have been fruitful and multiplied . . . and multiplied.  They surround a large boulder at the end of our driveway here, they border the roadside garden, and they border one side of the front garden.  Looking at them this year, you would never know I dug them all up last spring, dividing them and passing along as many to friends and family as I replanted.  Though they are the ubiquitous daylily and my tastes have since become more sophisticated, I'm not going to cast them out of Eden.  Any plant this hardy and faithful deserves to stay. 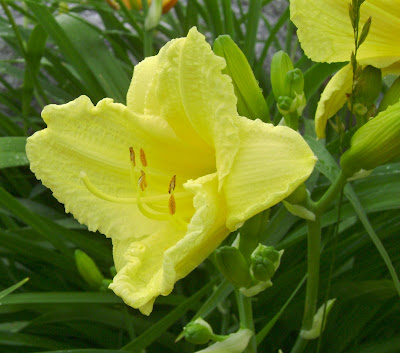 In the midst of this homogeneous group, though, a few rebels exist.  This paler yellow lily, variety unknown, apparently got mixed into some of the purchased Stellas and is planted near the boulder pictured above. 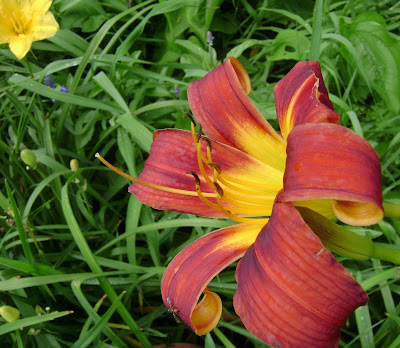 Another rogue lily appeared two years ago in the roadside planting.  The strange thing is that I don't think I divided this plant last year, yet when I passed along some divisions of Stella to my daughter-in-law, several of these appeared in her garden as well.  I've seen this variety pictured on several other blogs; does anyone know its name? 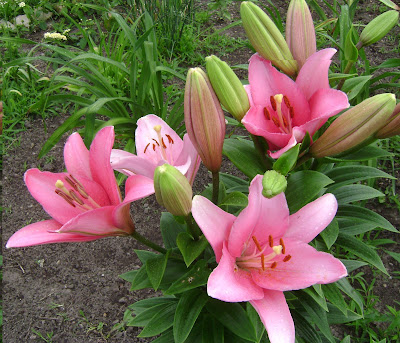 After the Stellas, the next to bloom was this Asiatic, "Brindisi."  I've shown it before, but in an attempt to record all lilies here, it must be included.  This was the first Asiatic lily I've ever purchased, and after seeing its lovely blooms that lasted for several weeks, it may be the first of many to come. 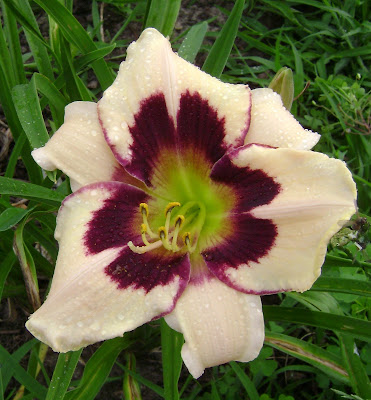 Several new daylilies were purchased last year on a trip to 5 Acre Daylily Farm with Beckie and are planted in the new lily bed.  'Moonlit Masquerade' almost didn't make the budget cut, but I'm glad she did. 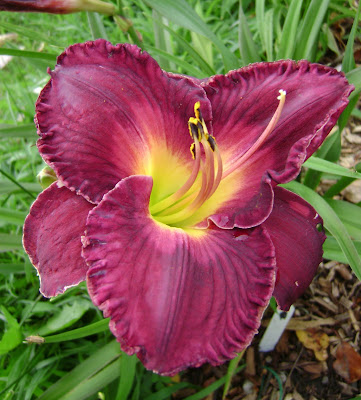 Most purchases were made purely based on appearance, but what former English teacher could resist her very own 'Canterbury Tales'? Other literary allusions were a little too pricey, but I hope to add more in the future . . . maybe my own literary lily garden:) 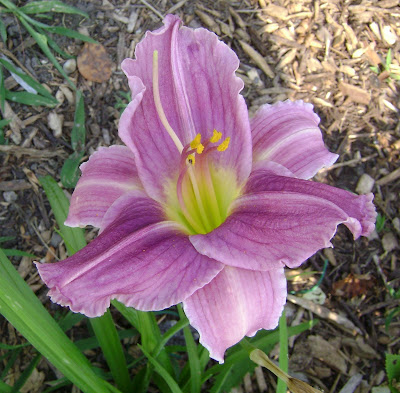 And no explanation is needed, I think, for the purchase of  'Prairie Blue Eyes.' 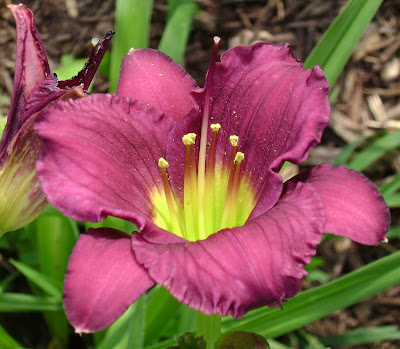 'Little Grapette'  was also added after seeing it featured on several blogs.  Its diminutive size prompted me to plant it at the front of the lily bed (southern end). 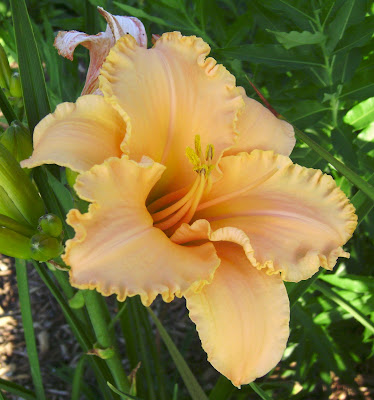 Despite wanting to add different colors, I found myself still drawn to several shades of orange last year.  'Tangerine Orange Ruffle' was my first pick; the color is more like orange sherbet than the pale color seen here.  The blooms of all lilies are at their fullest in full sun, yet that makes it difficult to capture their true color. 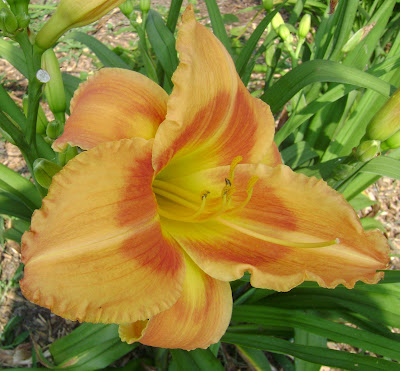 One of the fun things about visiting the daylily farm last year was seeing the hybrids they had grown.  Only a few of these pass muster for future propagation, and the rest are sold as unnamed, one of a kind hybrids.  Beckie and I each purchased one with plans for dividing and sharing them.  This is the one she chose and shared with me, which she named appropriately enough, 'Dragonfly Corner.' 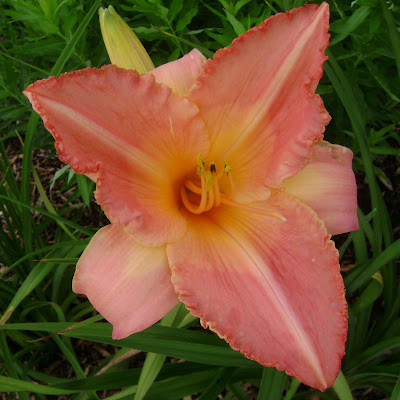 My selection has more pink than orange, and I thought the name 'Prairie Sunrise' fit it well.  Both of these are growing at the back north end of the lily bed along with 'Tangerine.'  These three, in particular, make it clear why a record is needed.  While they all still had their tags close by so that I could distinguish which was which, I can't depend solely on the tags.  Some creature (ahem, Sophie, are you listening?) likes to play hide and seek with my tags occasionally, making identification of unknown plants a real game. 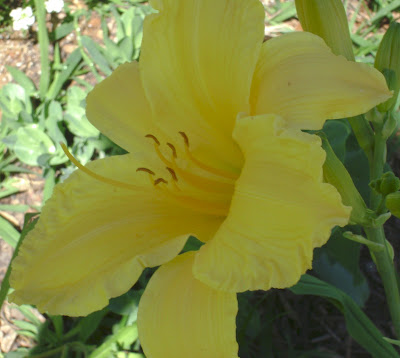 Near 'Prairie Blue Eyes' on the other end of the lily bed is this mystery yellow lily.  And when I say 'mystery,' I mean it is really a mystery--I have no memory of buying it, seeing it grow here previously, or even planting it.  It's really a lovely lily, much more lemony in color than Stella with larger blooms; I wouldn't mind having a few more mysteries like this one appear:) 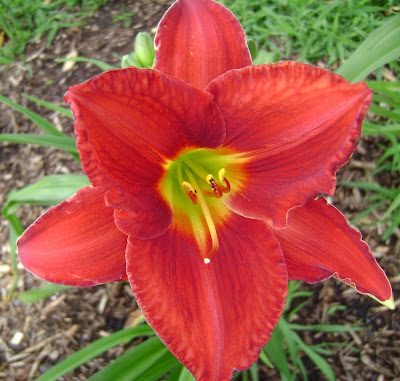 While I like to support the local daylily growers, not every lily here has been purchased.  My aunt gave me several divisions a few years ago.  She didn't tell me the name of this one, so I've renamed it 'Nettie's Ruby' in her honor. 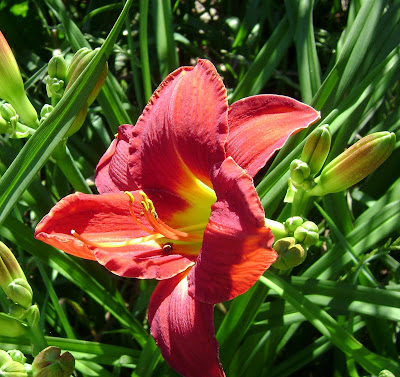 Five of 'Nettie's Ruby' were planted in the center of the lily bed, but one lone plant was left in its former neglected and weedy spot . . . it really deserves better surroundings. 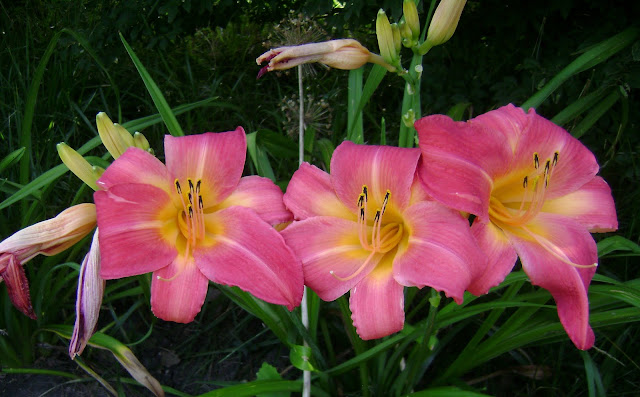 Another passalong from my aunt, these have been named 'Nettie's Coral' and are growing in the roadside garden.  I love this particular lily and had planned to move them to the new lily bed, but they look so good where they are, usually blooming right before the coneflowers (first photo) that I think they will stay where they are. 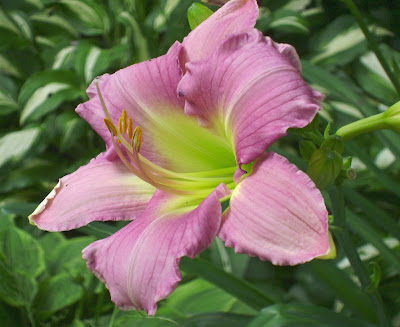 Another lily that didn't get moved is 'Lavender Dew.'  While several of the new lilies found a temporary home in the shade garden last summer and then were moved this spring, 'Lavender' was surrounded by hostas that I didn't want to disturb, so I left her alone.  In trying to track down her name, I found the original tag with not only the name but also the price--$5.99 at Meijer, though I think I bought it for even less than that on sale two years ago.  I have to say, right now she's looking as good as any of the other lilies with fancier pedigrees here. 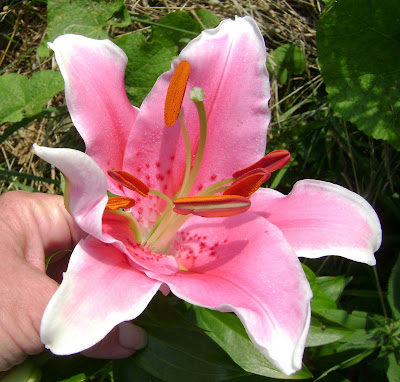 Finally, the last bloom to open--on July 4--is this Asiatic lily. It's a wonder this one has survived at all . . .I bought three bulbs a year ago last spring, forgot about them, then planted them late in the butterfly garden.   They didn't appear at all last summer.  Then to my surprise, all three of them appeared this spring.  A few weeks later I noticed the stalk of one had broken and was bent to the ground.  I was about to scold Mr. P for mowing too close to the garden when Sophie appeared at my side, bounding into the garden . . . and breaking a second lily. Mystery solved.   The only bulb whose name I remember buying was a 'Stargazer,' but I don't think this is it.  Maybe it should be called 'Survivor.' 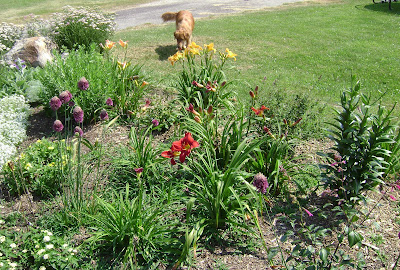 Compared to some, I don't have a lot of lilies, but as you can see from this partial shot of the new lily bed, there is plenty of room for more. I'm looking forward to an even bigger Lily-la-palooza festival next year.
Posted by Rose at 4:30 AM