What makes a nation's pillars high 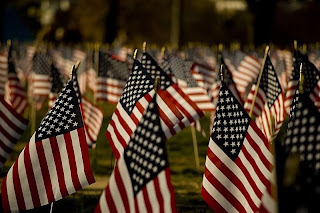 And its foundations strong?
What makes it mighty to defy
The foes that round it throng?

It is not gold.  Its kingdoms grand
Go down in battle shock;
Its shafts are laid on sinking sand,
Not on abiding rock.

Is it the sword?  Ask the red dust
Of empires passed away;
The blood has turned their stones to rust,
Their glory to decay.

And is it pride? Ah, that bright crown
Has seemed to nations sweet;
But God has struck its luster down
In ashes at his feet.

Not gold but only men can make
A people great and strong:
Men who for truth and honor's sake
Stand fast and suffer long.

Brave men who work while others sleep,
Who dare while others fly . . .
They build a nation's pillars deep
And lift them to the sky.


No big plans here for the Fourth of July, other than possibly taking in a local fireworks celebration, but I'm just happy to be healthy and somewhat energetic again.  I spent several days on the couch last weekend with a flu-like virus, too ill even to feel like sitting at the computer.  But worst of all, last Saturday was the annual Master Gardeners' Garden Walk, an event I've looked forward to for months.  Not only did I not get to tour the gardens, I also couldn't honor my commitment to volunteer as a guide for part of the day.  What a disappointment! 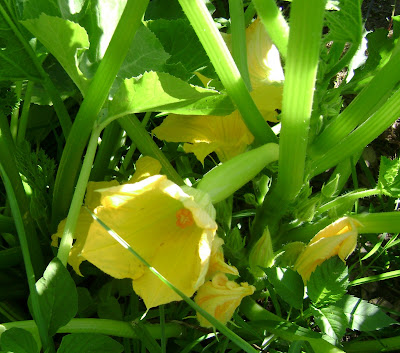 But I'm no longer sitting around feeling sorry for myself--my energy has slowly returned, and the weather has been absolutely glorious the past few days.  The rains have finally stopped, and the temperatures have dropped to the comfortable 70's with little humidity--perfect gardening weather.  After neglecting my own garden for more than a week,  I couldn't believe the changes in such a short time, especially in the vegetable garden.  The squash are sporting lots of blossoms as are the cucumbers which are threatening to take over the whole garden.  Green beans are ripe and have been enjoyed for two nights' dinner already.  The tomatoes, I swear, must have doubled in size in the past week and already have small green fruit visible. 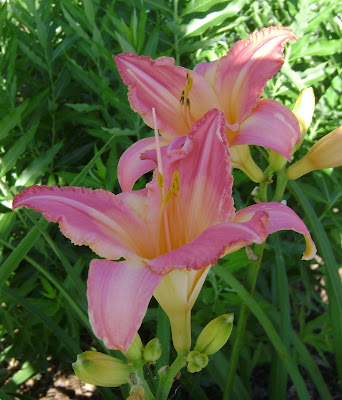 All the daylilies have been blooming for the past week, including several new cultivars purchased last year.  A later post is planned to give them the attention they deserve. 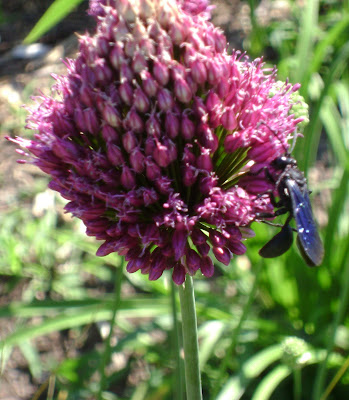 The new drumstick alliums are also blooming in the new lily bed. I'm still not sure why their heads are rather conical shaped instead of round, but they're still eye-catching, and this blue beetle (name forgotten) finds them to his liking nonetheless. 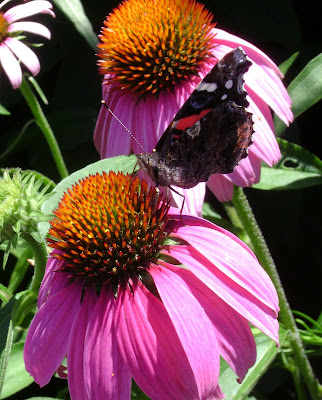 Best of all, it is coneflower time!  Blooming a few weeks earlier than past years, they have attracted a host of butterflies and bees.  This solitary Red Admiral is just one of at least a dozen that flutter from bloom to bloom every morning and evening.  Purple coneflowers, Echinacea purpurea, have always been my first love; in fact, I once chose them as my signature plant.  Seeing them in bloom each summer is like meeting old friends once again. 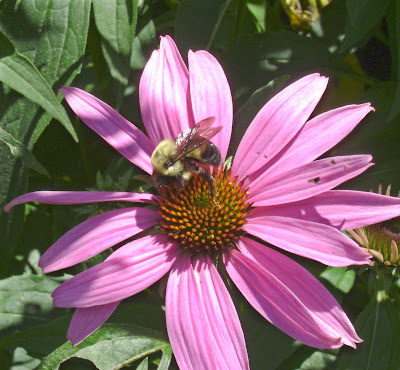 Speaking of friends, I was sad when dear friend Cheryl decided to discontinue blogging due to time and family commitments.  This bee is for you, Cheryl.  But then again, she might just decide to post now and then . . . 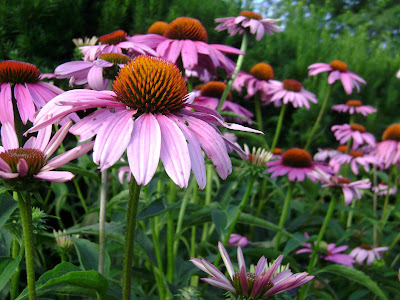 I'm also a bit sad that I won't be seeing other blogging friends at Buffalo next week.  Ever since attending last year's Spring Fling in Chicago, I had fully intended on traveling to Buffalo for this year's Fling, Buffa10.  But several things that have come up in the last few months forced me to reconsider.   I hope that everyone who attends has a wonderful time!  Judging by the planned schedule as well as the article on the Buffalo Garden Walk in the summer issue of Horticulture, written by one of the Buffa10's hosts, Elizabeth Licata, I'm sure that all of you will no doubt thoroughly enjoy yourselves.  I have my fingers crossed that there will be another garden bloggers' gathering planned for next year so that I can attend.

In the meantime, I wish everyone a happy and safe Fourth of July weekend!  And I encourage you to visit Carolyn Gail, our hostess each month for musings on this first day of July.

"You have to love a nation that celebrates its independence every July 4, not with a parade of guns, tanks, and soldiers who file by the White House in a show of strength and muscle, but with family picnics where kids throw Frisbees, the potato salad gets iffy, and the flies die from happiness.  You may think you have overeaten, but it is patriotism."
--Erma Bombeck
Posted by Rose at 3:20 PM