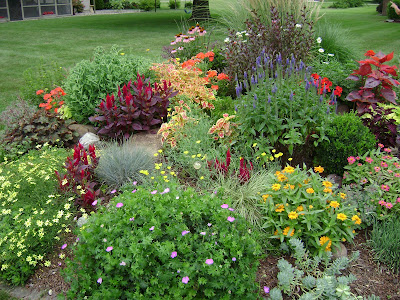 While some blogging friends spent a long weekend in Buffalo, New York viewing some fantastic gardens and renewing old friendships, Beckie and I had our own mini garden bloggers gathering--a conference of two--here in central Illinois.  Taking advantage of a rare weekend where neither of us had other commitments, we attended my small town's Garden Walk on Sunday.  After missing the big Garden Walk sponsored by the county Master Gardeners a few weeks ago, I was determined not to miss this one, in spite of the hot afternoon.  While none of the gardens were as large or as impressive as the ones on the MG walk, as Beckie said, they were more "attainable" gardens. This berm planted with bright annuals and perennials, for example, is something I could see myself accomplishing in my own garden . . . although I probably wouldn't be able to keep it perfectly weed-free as every garden space at this home was:) 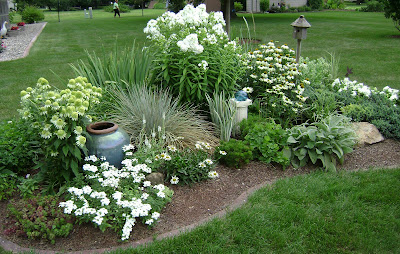 Another inspiring  planting at the same home was this "White Garden."  Definitely not on the same scale as Sissinghurst, but again a very do-able project for any gardener.  I wish I had written down all the plants used here, but you can see two of the main whites--phlox and Coconut Lime Echinacea. 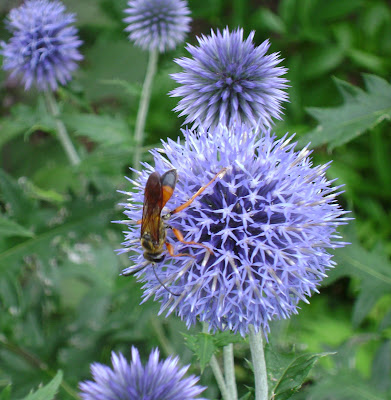 This garden walk was also enjoyable because I knew all but one of the gardeners whose gardens we visited.  This sea holly Echinops or globe thistle (thanks, Susan!) with its winged visitor was in one of the garden areas at the home of fellow Tai Chi enthusiast June.  After discussing gardening with June every time we met, it was a treat to finally see her lovely garden. 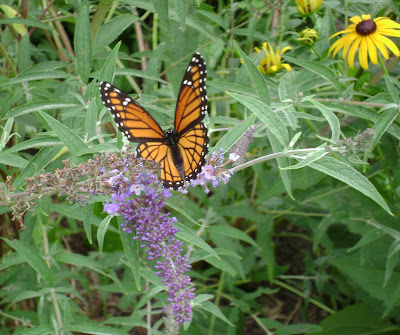 We were the first visitors at MG classmate Tracy's garden, so she gave us the full tour herself, including her collections of grasses and butterfly bushes.  As if demonstrating the appeal of her garden, a Monarch landed just as we were visiting this area, giving me the opportunity to get my first Monarch photo of the season.  Tracy also had an unusual yellow butterfly bush which really appealed to both Beckie and me.  Of course, I didn't think to get a photo. In fact, I realized by the end of the walk that I had actually taken very few pictures, probably because I spent more time talking to the garden owners as well as many of the other visitors I knew than getting out my camera. 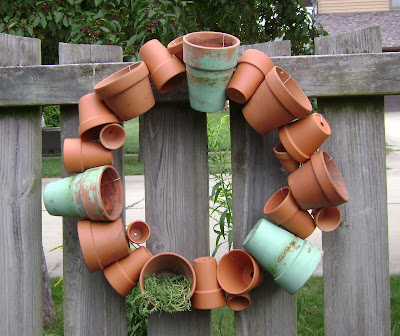 Near the end of the Walk, Beckie and I commented that we hadn't seen much garden art or whimsy in any of the gardens, but that changed when we arrived at Jolene's.  Clever pieces and unexpected uses of ordinary objects appeared frequently in her back yard garden, like this wreath made of small flower pots attached to a wire frame. 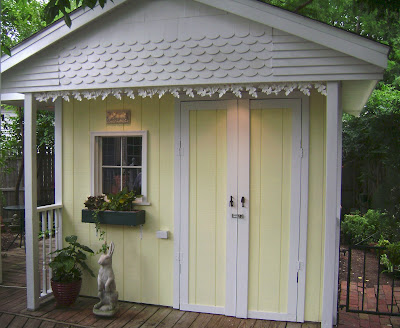 My favorite "piece," though, was more than just a wire sculpture or accent; it was something much more substantial--this garden shed.  Besides the inviting exterior, just look at the detailing.  If you can enlarge the photo, you might be able to see the gingerbread trim in the shape of oak leaves. 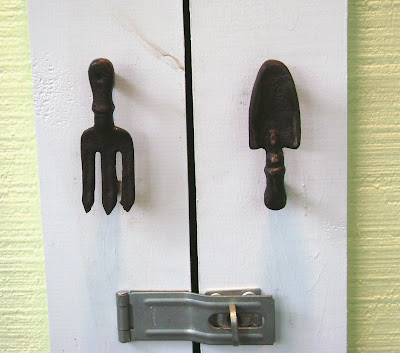 And look at these clever door handles!  Jolene had transformed her whole back yard into a garden area with not a spot of grass,  including the area behind the shed which serves as a "nursery," a holding spot for new plants.  But I was most impressed when I learned that Jolene had built this shed herself.  Although she had some help with the roof trusses, she completed everything else on her own.  I have a new-found respect for her--a gardener and a woman handy with hammer and nails! 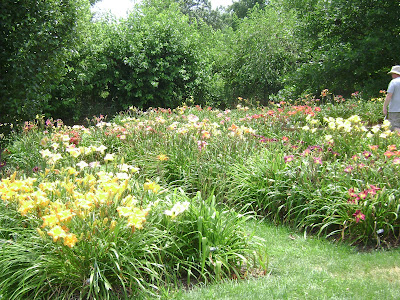 Although I didn't take many pictures on the Garden Walk, I did have my camera ready for photo ops the day before as Beckie and I visited a favorite spot, 5 Acre Daylily Farm, on Saturday. This was the place where I purchased all the new daylilies last year that I featured in my last post.  We picked the right time to visit as most of the lilies were in full bloom. 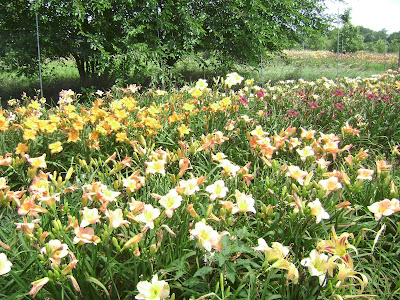 It was another hot, hot day as you can tell from these sun-washed photos, so we arrived in mid-morning to allow us plenty of time to enjoy the farm before we wilted from the heat.  Visiting a farm like this is not a quick shopping excursion; it's a destination.  Fields and fields of all kinds of lilies in varying shades had to be inspected. 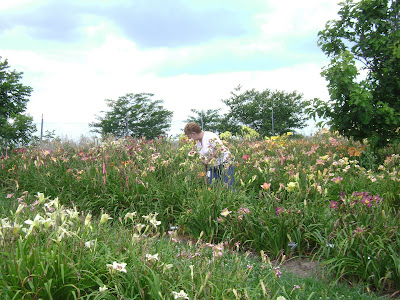 Beckie and I carried around a pad of paper to mark down our choices, not an easy task.  Although our paper was filled with names of lilies that caught our eyes, we both had vowed before we came that we weren't going to buy many this time, and we were pretty self-disciplined this time--Beckie bought two, and I bought only three.  Each of us bought an unnamed hybrid, as we did last year.  These are lilies that the owners have hybridized, but for one reason or another, have decided not to propagate.  The large clumps are sold for $15 each, which actually is quite a bargain, because you get several fans that can be easily divided, rather than the single fans commonly sold elsewhere. 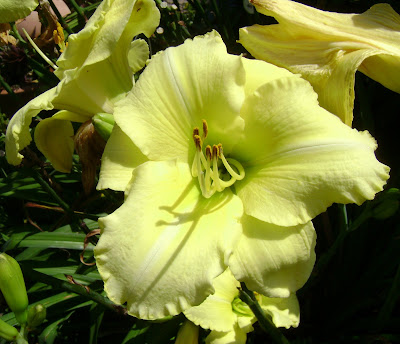 Not 'Stella'
Another advantage to buying directly from a daylily farm is that you get expert advice from the growers.  Steve not only gave us tips on planting, but during our conversation gave us information on the common Stella which he said is a great plant, but unfortunately one that most people don't know how to care for.  According to him, Stella d'Oro's need to be fertilized every three weeks in order to maintain their blooms throughout the season because "they are literally bred to bloom themselves to death" otherwise.  Who knew?  I haven't fertilized my Stellas in years because I thought they were vigorous enough without it, but that explains why they no longer bloom so well in August as they once did. 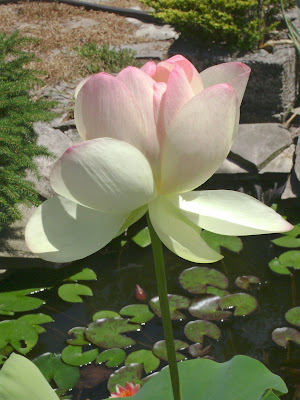 After narrowing down our choices, Beckie and I filled out our orders, then waited until Steve dug up all the plants.  That gave us some time to explore a little further while we waited.  His backyard pond area drew me in as I spotted this magnificent water lily from a distance.  I couldn't find a name, but this lily was at least three or four feet tall with a bloom that rivaled the prettiest of roses. 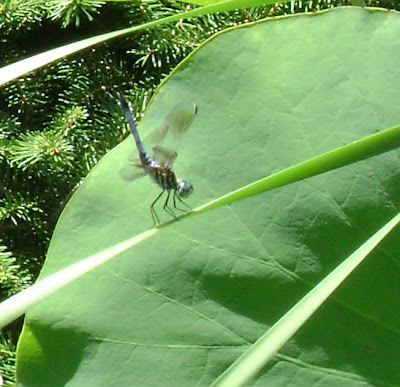 And we had time to chase around dragonflies with our cameras. 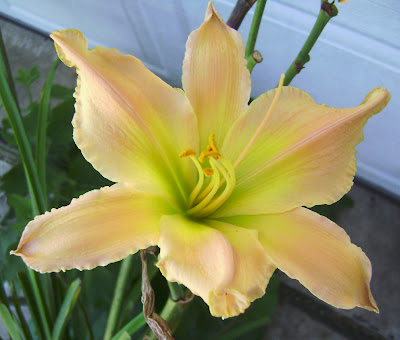 By the time I placed my order, I was on sensory overload and had a hard time not getting carried away buying everything I wanted.  But I restrained myself and limited my choices to this lovely pale peach hybrid pictured above and my first spider lily, a large yellow called 'Spider Miracle.'  Of course, I had to have one more "literary lily," so I chose 'Romeo Is Bleeding,' a bright red lily with yellow edging and a yellow throat.  The hybrid needed a name, which wasn't difficult at all--what else but 'Juliet'?!  She's quite a bit taller than Romeo, but that's ok; I always thought Juliet was the stronger and braver of the two anyway.  Now all I have to do is find a place where these two star-crossed lovers can live out the rest of their lives side by side with no feuding relatives to spoil their happiness.
I hope you all had a great weekend, too, and are surviving this unrelenting heat!
Posted by Rose at 8:15 AM