I've Got It Made in the Shade

Is there such a thing as a perfect garden?  After viewing many public gardens and some magnificent private ones, both large and small, in the past few years, I think there might be such a thing..  But I can assure you that if perfection exists, it's in someone else's garden---definitely not in mine. 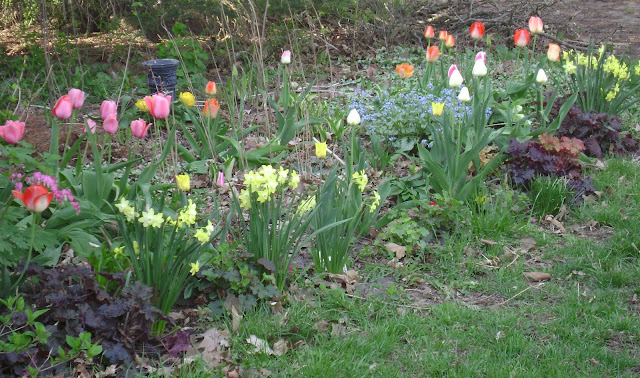 There is always a long list of unfinished chores to accomplish--weeding, edging, trimming, fertilizing, and on and on.  Or looking at the garden in bloom, I realize I need more color or different textures or some height.  Looking at the shade garden (above) in mid-April, I enjoyed the spring-flowering bulbs, but realized I should have planted more last fall. 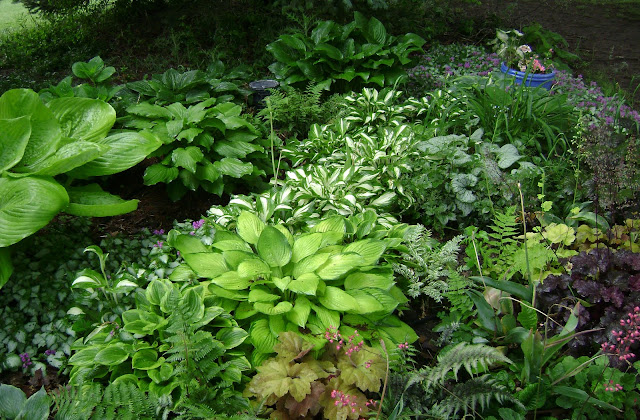 But in mid-May, with the spring bloomers fading and the heart of this garden finally in full growth, I had a moment of bliss.  My shade garden, for me at least, is almost perfect. 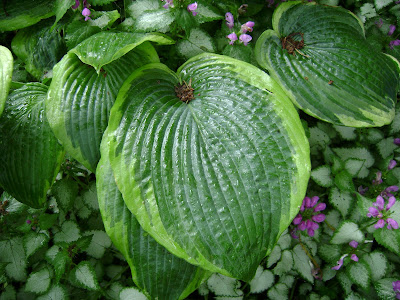 I had just planted a small shady area at our old house, when we decided to move to the family farm in the late summer of 2004.  I didn't want to abandon all those new plants, so one fall weekend I dug most of them up and hastily transplanted them to the easiest shady spot I could find here--right next to a huge spruce tree.  They thrived in spite of fighting for water with the spreading roots of the spruce. 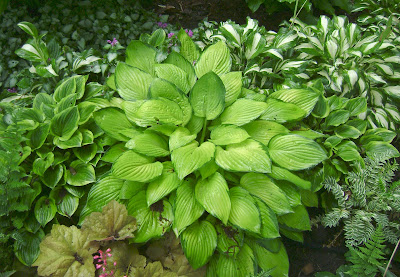 The pricey (at that time) 'Endless Summer' hydrangeas settled in as well as several other single specimen plants.  But the mainstays of the garden then and now are the hostas.  Most of them are NOIDS, being either passalongs or part of a "bargain bag" collection offered by a discount plant catalog. A few more were purchased later and added, but their tags are buried somewhere.  I wish I knew the name of this chartreuse hosta and where it came from, because it's my favorite. Serendipitously, it's at the center of a grouping of hostas. 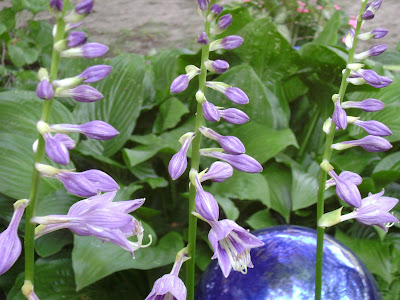 Of course, I love the varied foliage of hostas, but I also enjoy the purple and white blooms that appear above them in mid-summer, adding a little color to an otherwise predominantly green landscape. 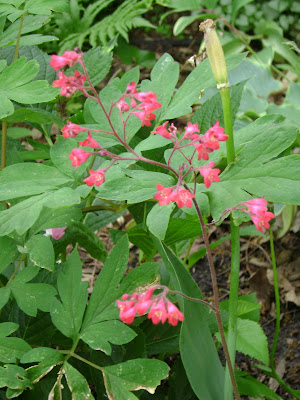 This shady area was very small, so in the fall after I retired, I decided to expand it, digging it up by hand and doubling its size.  It's still a small garden by most standards--I've said before not to expect any expansive sweeps of gardens if you visit here; all I really have are some flowerbeds situated hither and yon that I collectively call my "garden."  But for me, what the shade garden lacks in size, it makes up for in beauty.

The next spring--two years ago--I decided to border the expanded area with old-fashioned coral bells.  Several very small, inexpensive plants were purchased that filled in only the center front of the garden. 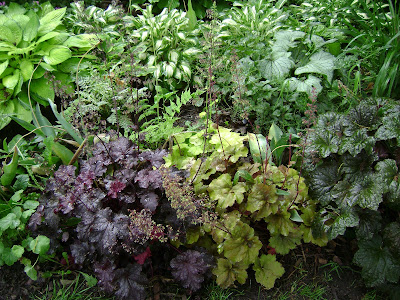 But then I discovered the wonderful world of heucheras!  'Purple Palace,' 'Plum Pudding,' (I still don't remember which is which), 'Dolce Creme Brulee,' 'Key Lime Pie,' 'Tiramisu' all called out to me with their promises of no-calorie sweetness. The border is now filled with these, which I much prefer to the plain old coral bells.  (Though 'Key Lime Pie' has since disappeared--perhaps another hungry varmint thought it made a good dessert.) 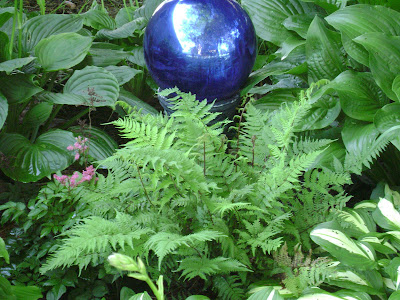 And what better companion for hostas and heucheras than ferns. Only one Japanese painted fern was originally moved, then a few bareroot starts from the same discount catalog were planted. 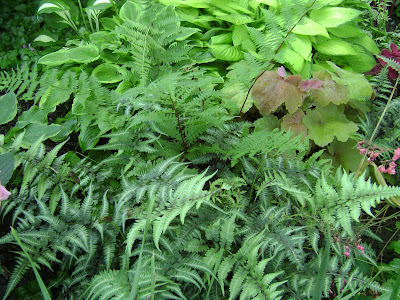 They did nothing for the first two years, but suddenly they have taken the leap and even multiplied.  Add to those, some passalong cinnamon ferns kindly given to me by Lisa, and I now have almost as many ferns as hostas. 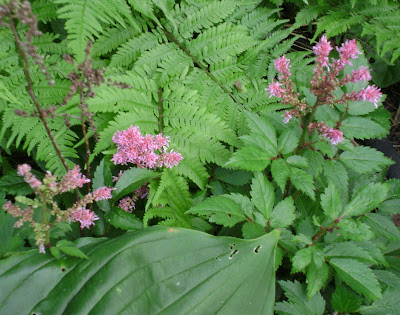 Astilbe haven't fared as well here, but the constant rains of June gave my lone survivor a better start this year. 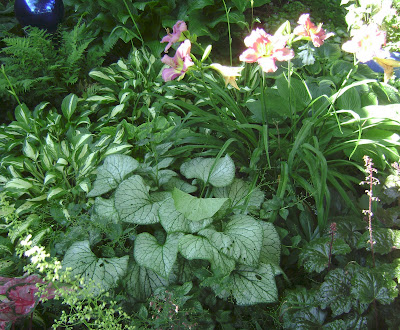 This area is actually what you would call dappled shade and gets a few hours of direct sunlight, making it possible to grow a sun-lover like this daylily glaring in the sun. 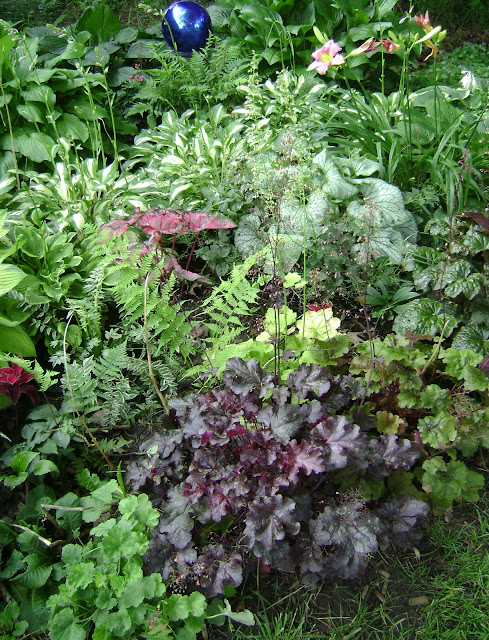 As you can see, everything is packed in tight here, meaning you must look closely or you might miss something. 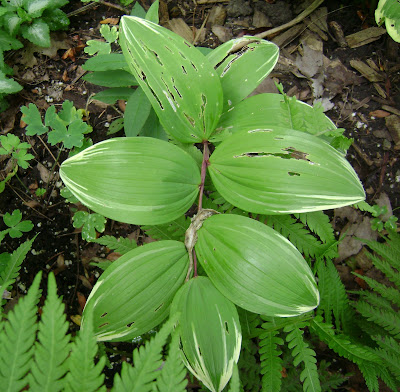 This spring I noticed this stem coming up and wondered what it was.  Fortunately, I realized it wasn't a weed and left it alone.  On the garden walk last week, I saw much larger specimens of this plant and realized it was Solomon's Seal.  A few minutes of thought, and it came to me that this must have come in with the cinnamon ferns.  Thanks, Lisa, for the bonus plant! 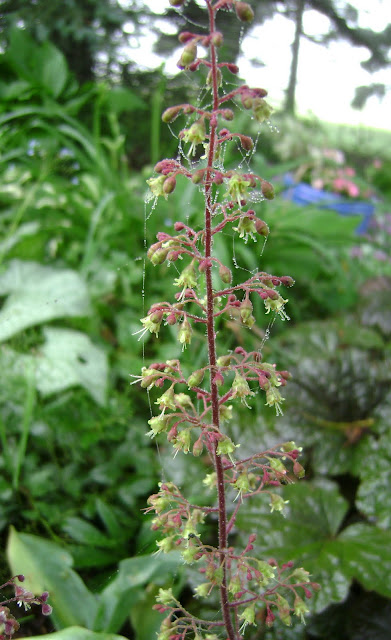 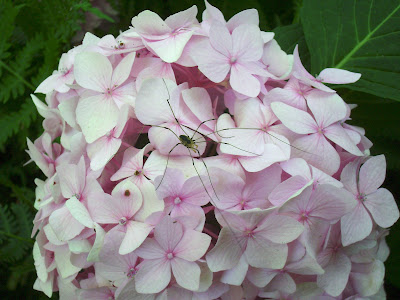 Often small creatures can be found hiding in the blooms or the foliage, like this daddy-long-legs on a hydrangea bloom. 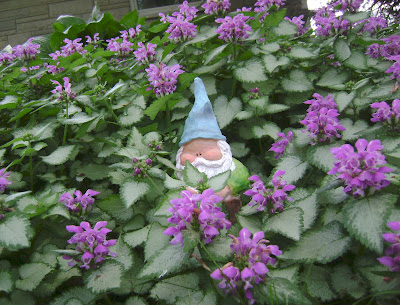 Even stranger creatures might be found like this gift from Beckie.  Actually, I staged this photo, considering writing a parody of Stevie Smith's "Not Waving, But Drowning" for June's Muse Day post.  But as much as I like that poem, it's rather depressing for a Garden Muse Day, and Mr. Troll is far too jovial for gloomy thoughts. 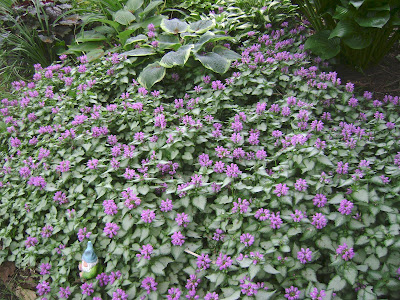 Still, he does look as if he's drowning in this sea of lamium, doesn't he?  A few  lamium once bordered  the shade garden, but as they encroached upon other more desirable plants, I've moved them--and moved more of them--to a bare area underneath the spruce.  It's not looking this good right now, but in early June it certainly made me look like a gardener with a very green thumb. 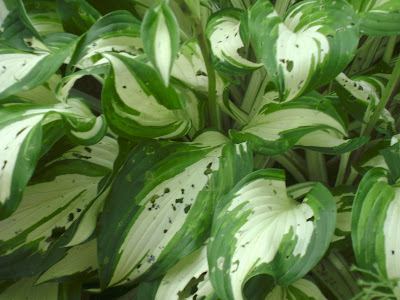 As summer has progressed, the nearly perfect garden of May is showing some imperfections.  Tiny holes are evident in nearly every leaf, probably the work of earwigs, the worst infestation I've ever seen here. 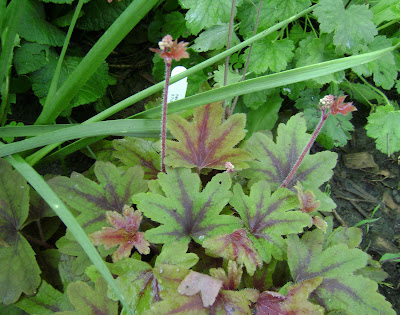 Probably the biggest flaw, though, is of my own doing.  I keep buying plants and more plants, then "shoehorning" them into small bare spots ala Joy, without thinking about the size they will become when mature.  Spring sale impulse buys included this heucherella, 'Sweet Tea,' which fortunately fit into a small spot. 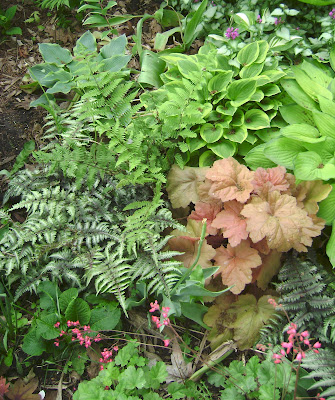 It was a tighter squeeze, though, for this peachy-bronze heuchera bought at the same sale.  'Southern Comfort' provides a little liquid refreshment to go with all those dessert heucheras:) 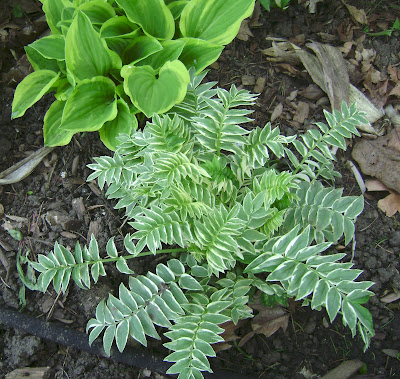 A much larger bare spot was found for another impulse purchase,  this Jacob's Ladder 'Snow and Sapphires." 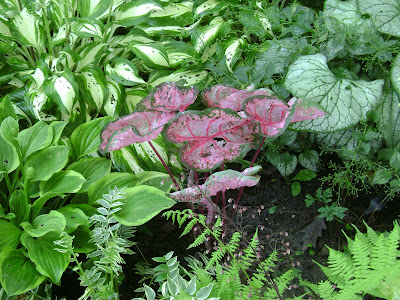 But a few weeks later, when I added this pink caladium nearby,  there no longer was a spot of soil visible. Today as I look at the shade garden at the height of summer, I am beginning to think everything is much too crowded, and some thinning out needs to be done.  I think it's time to get out the spade again and head westward . . . or maybe northward . . . 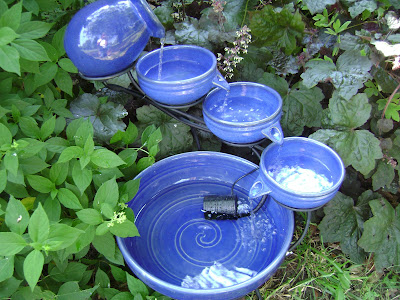 Another example of  "it seemed like a good idea at the time" is this fountain given as a birthday gift by my daughters.  I loved this small water feature, and the blue is the perfect accent here in the shade garden.  There's only one problem--it's a solar fountain, and the water flows only when the sun is shining on the collector.  Oh well, it's still pretty to look at. 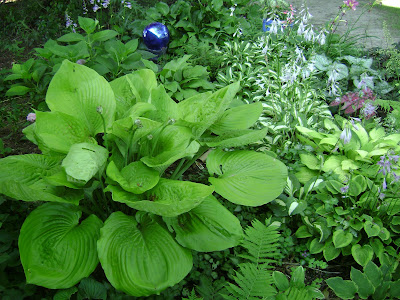 And finally, while I'm being critical, this garden lacks a focal point, unless you count the large 'Sum and Substance' hosta at the back of the garden.  I may have solved this problem, however, after a shopping trip to a garden center with Beckie yesterday . . . stay tuned for a later update. 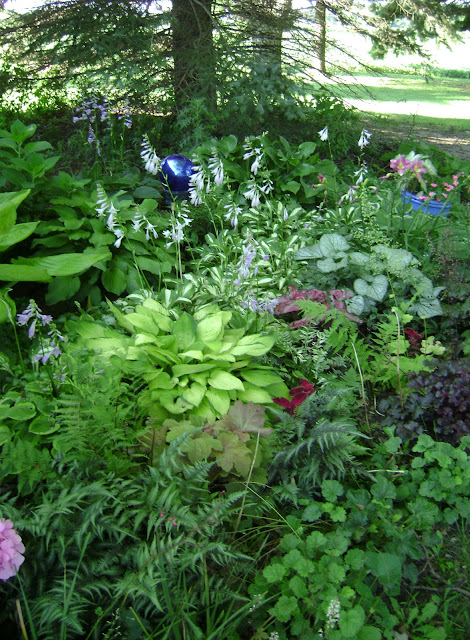 Despite the obvious imperfections, I still enjoy this garden area where I have it made in the shade.
Thanks for hanging in here with me on this long post--I can't seem to stop talking once I start:)  But I hope it wasn't too bad, because I neglected to mention one obvious advantage to this area this hot summer-it's the only cool spot in the garden!
Posted by Rose at 5:00 AM