I Need a Vacation!

After being away from home for nine days, I need a vacation! While going to Oregon was an adventure and full of lots of quality time with Youngest Daughter, it wasn't exactly a time of rest and relaxation. To explain, let me give you a brief synopsis of my trip . . .

Day 1: Several hours after leaving home, we crossed the Mississippi River--good thing YD was asleep so she didn't panic at seeing me taking photos while driving across the bridge:)--into . . . 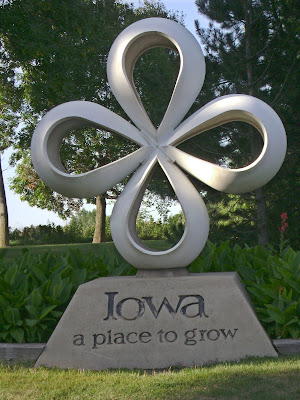 . . . Iowa. Traveling with Coconut meant only necessary stops for food and gas and, of course, rest areas. Fortunately for him, "Grandma" needs frequent pit stops, so he got a chance for lots of interesting walks. Continuing on into the night into Nebraska (too dark for photos) . . . 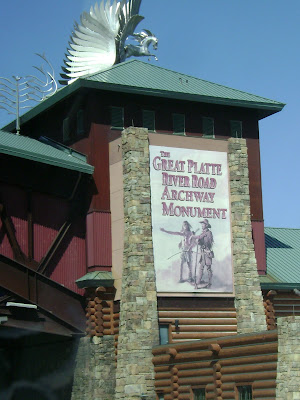 Day 2: Traveling I-80 across Nebraska, there were lots of interesting places to see, including some historic stops along the Oregon Trail, like this one at Fort Kearney. But we had a schedule to stick to, so no sightseeing this trip. (Which accounts for most of the lousy pictures here--most taken from the car window while driving.) 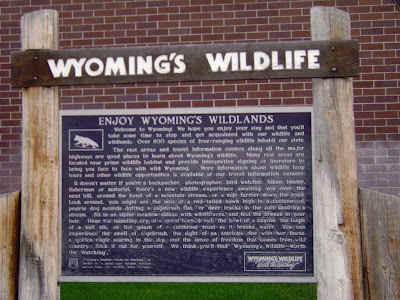 Still Day 2: Into Wyoming. About the only wildlife we saw in this part of the state were cows! 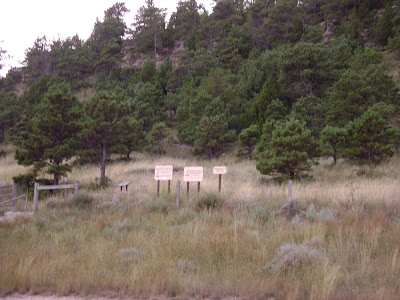 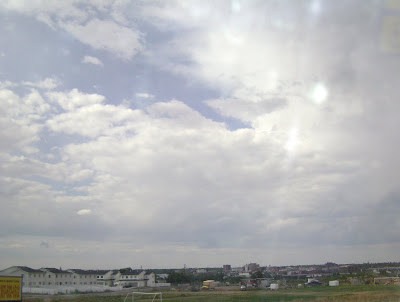 Day 3: Still in Wyoming. No offense to any Wyoming residents, but the southern part of Wyoming along I-80 is quite frankly. . . desolate. Towns were so few and far between that I wasn't sure anyone even lived here other than the cattle. Of course, it didn't help that we had been on the road for hours. 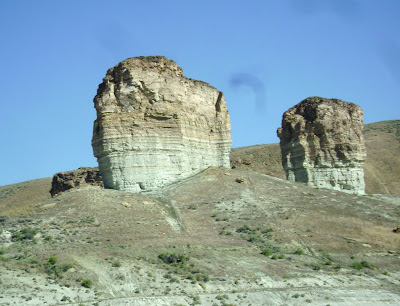 Still Day 3: Finally we made it into Utah and hooked up with I-84. A few hours of some beautiful mountain scenery and a glimpse of the Great Salt Lake made this part of the journey go more quickly. 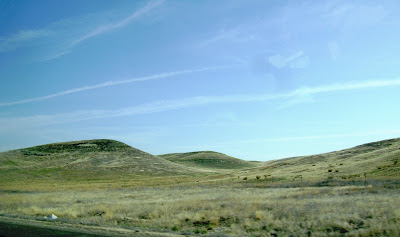 Still more of Day 3: Into Idaho, which . . . um, looks a lot like Wyoming:) Again, apologies to Idaho readers . . . I know other parts of Idaho are much more scenic. And, to be honest, eventually the landscape turned into farmland. 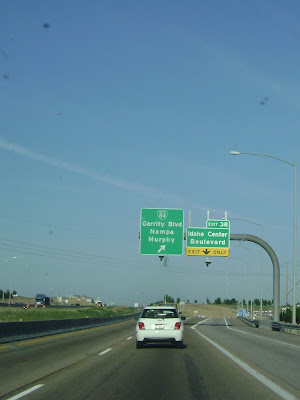 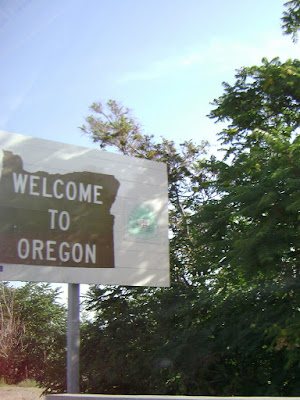 . . . Oregon! Daughter and both cheered when we saw this sign! 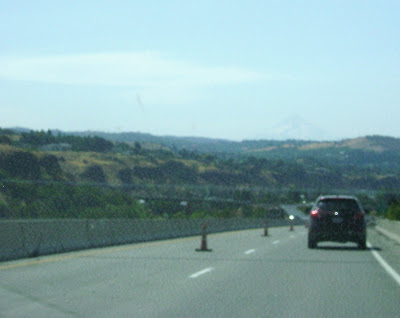 The last few hours of our trip took us along the Columbia River in northern Oregon, with so much beautiful scenery that we almost forgot to think how long we had until reaching Portland. A faint image of Mount Hood can--perhaps--be seen in the background in the photo above; it was much more visible to us as we drove along the highway. 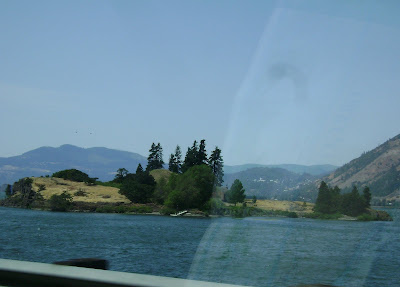 Huge fir trees along the slopes of hills to our left and the blue waters of the river to our right gave us a taste of the beauty of the Northwest. Too bad I didn't roll down the window to take this picture to avoid the reflection of the map on my lap:)

Over two thousand miles and four days later, we finally arrived in Portland and found Daughter's new apartment complex. After touring her apartment and finding it just what she had hoped, we decided to save hotel expenses and "rough it" for one night, even though her furniture was not due to arrive until the next day.

Day 5--8: After a night's sleep on the floor--and I use the term "sleep" very loosely here--I had to get up at the crack of dawn to loosen up the kinks in my joints before the hard work began. The movers came, and the unpacking process began. Somehow I envisioned my role on this trip as being the alternate driver and as setting up the kitchen and making the beds, all pleasurable tasks for me. What I didn't think about was the other part: this mechanically-challenged mom found herself wielding hammers, screwdrivers, and even wrenches to help re-assemble the bed, the kitchen table, and a futon. Then Daughter decided she needed to buy a new TV stand and a computer desk.

The TV stand was fairly easy, but the computer desk was another story. It took three salesmen from the office supply store to load this in the back of her car, and one of them--bless his heart--looked at us in concern and asked, "Are you sure you ladies are going to be okay?" Daughter, ever-confident, assured him we would be, and we rode off into the night--two women cruising the streets of Portland's suburbs in a classy convertible with the top down. As you picture this scene and think how cool I must have looked, add this to the image--it was freezing cold by this time, and I had to keep my arm back, holding onto the box so it didn't topple over and crush us to death. Then the hardest part . . . how did we get this 100-pound+ box up to her second story apartment?? While I panicked and suggested knocking on apartment doors looking for burly men, Daughter, the analytical math whiz, suggested we take apart the box and carry it up, piece by piece. And that is what we did . . . 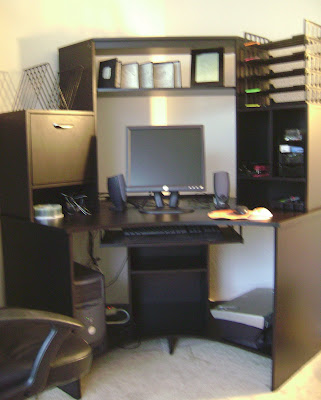 Voila! The finished project. I was so impressed with Daughter's capability, especially since she never understood how to work a laundry hamper at home. She followed instructions carefully--all 40 steps!--and other than a little help from me in balancing boards while she nailed, she did it all herself. 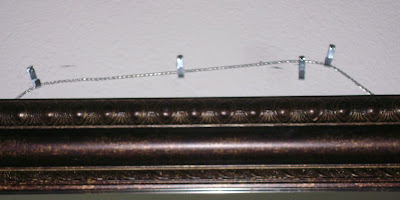 I, on the other hand, was chosen, as the taller of us, to hang a mirror on the wall. You can see my efforts above--would you believe I even used a level?:) Not to worry, I did manage to improve upon this before I left, although I did warn Daughter not to do any aerobics in the living room, lest the mirror come crashing down. 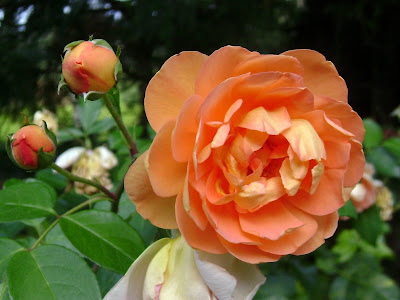 Having spent most of our time working or shopping for necessities, Daughter agreed when I said I wanted to see something of the area before I had to leave for home. Did you know that Portland is often called "the City of Roses"? We traveled by train to downtown Portland, visiting Washington Park, the site of several interesting places. Although we saw only the outside area of the International Rose Test Garden, we did spend some time in a fantastic Japanese garden--more on that in a later post. 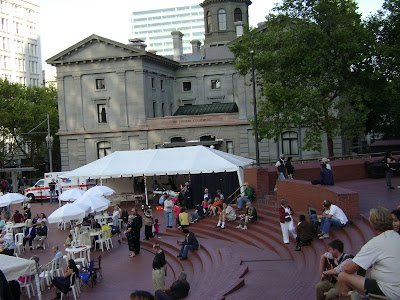 After humoring me by walking past waterfalls, koi-filled ponds, and an amazing Zen garden, Daughter wanted to go further into the city to find where she would be attending classes. At the next train stop we found ourselves at Pioneer Square, which was alive with activity and the sounds of a swing band. Nordstrom's and other shops are nearby; this will be on my must-see list next time. 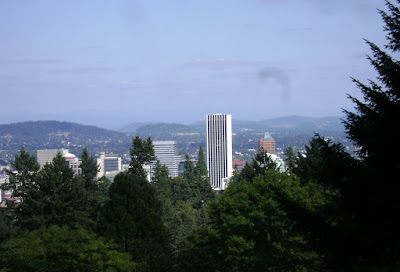 Portland is a beautiful city, with gorgeous scenery surrounding it. I've already informed my daughter the next time I come to visit, I plan to relax and enjoy the sights! 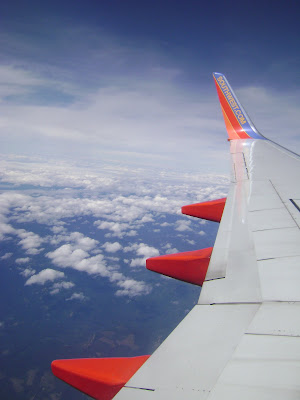 Day 9: Time to fly home. I must say that the four-day drive out to Oregon really made me appreciate the four-hour flight home. I can only imagine after seeing the terrain on the drive in an air-conditioned car going 75 mph what such a trip must have been like for the original pioneers of the Oregon Trail. It's amazing how many of them survived such an arduous trip.

A big thank you to dear friend Beckie. I had planned to take a shuttle bus home after my late-night flight. But Beckie volunteered to make the 2 1/2 hour drive to Midway to pick me up. It gave us a chance to catch up on the latest, even though our chatting almost took us north to Wisconsin instead of south to home:)

Thank you, too, to all of you for your kind comments and concern on my last post. I really didn't mean to sound sad, but I think I was suffering a little empty-nest blues my first day back. Not to worry, though, I have plenty of plans to fill up my time. I'm already scoping out Daughter's bedroom and making plans to redecorate for a guest bedroom. Tai Chi starts next week, there are grandchildren's activities to attend, and still more blog reading to catch up on. And, of course, the garden . . . 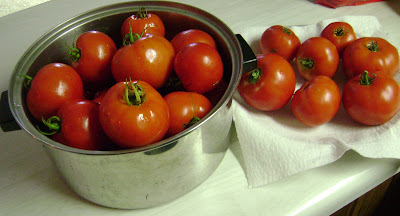 While I didn't get to taste a ripe tomato before leaving for Oregon, a bounty awaited me. Tomatoes are simmering on the stove as I write, waiting to be pureed into juice and put into the freezer.