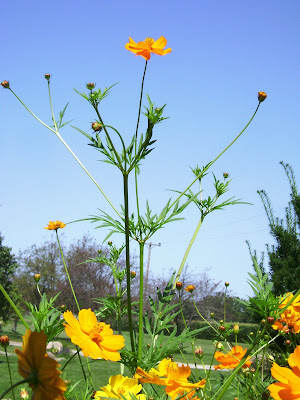 Throughout the summer I have mentioned in posts and comments about my new wild/butterfly garden. Now that it's finally full of blooms, I wanted to share it with you and to ask your help in choosing the right name for this new area. But first a little history . . . 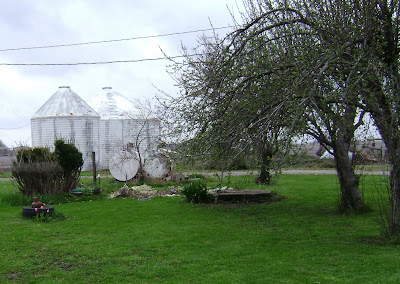 Last summer I got the bright idea to turn an ugly area of the back yard into a "wild" garden where extra plants could spread at will. This is the area I often call the "back forty," which isn't forty acres at all, obviously. It's a circular patch of lawn between the house and main yards and the outbuildings of the farm. Forty years ago, the old farmhouse sat in the lower front area of this picture.


Not to mislead you in any way, this garden is a small area, perhaps 10 feet square--except it's not square, of course, more of a hexagonal shape, if anything. It is bordered on the left by the well pit (very convenient for watering), on the right by the old cistern, and on the back side by a concrete pad leading to the ugly, but necessary, fuel tanks needed for the large tractors working the nearby fields. In the summer, hollyhocks grow all around this area and weeds grow behind it:) You can barely see a spot in front of the fuel tanks where newspapers were laid down in an attempt--later aborted--at lasagna gardening. Mr. Procrastinator kindly tilled up part of the area on Mother's Day for me, but he didn't realize I meant a larger area than it first appeared. Later I tilled up more, but the size of the actual garden became smaller than intended as the end of May approached, and the gardener's arms grew weary from the jarring motion of the tiller. 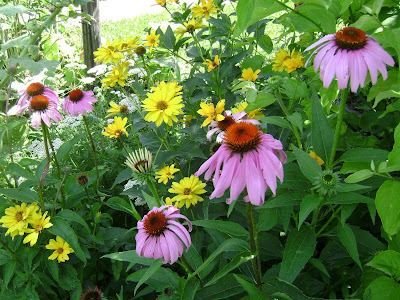 I was determined not to have any kind of formal planting plan, just to plant whatever struck my fancy wherever there was room. Last spring I transplanted coneflower seedlings and yarrow here, as well as some pass-along false sunflower from Beckie, who warned me these yellow pretties might take over. These three plants eventually could take over this whole area, but of course, I am too impatient to wait for that, so other plants were purchased to fill in the bare spots.
Should I call this my Wild Garden? 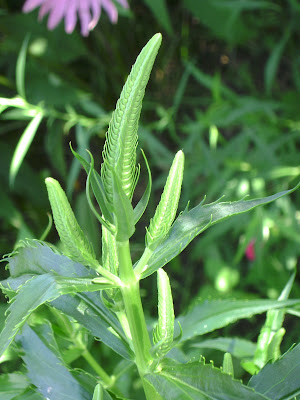 Beckie and I attended a plant sale in the spring sponsored by the local herb society and the Prairie Plant Society, where I made several purchases which went into the new garden. The Obedient Plant pictured above was beginning to bud on Sunday, but by Wednesday it lay on the ground, its stem broken near the soil line. Perhaps it was a victim of the strong winds on Tuesday, but another possibility might be a certain errant Golden Retriever lunging through the garden on one of her butterfly-chasing expeditions. Another native, the Blazing Star, fizzled out soon after planting. 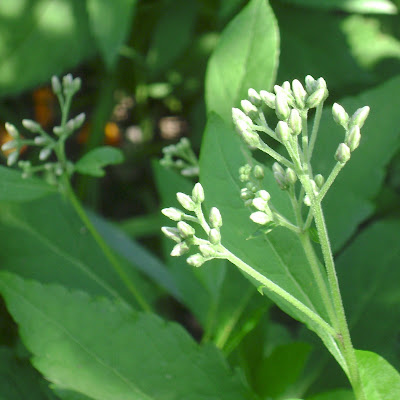 The two Joe-Pye weeds, however, survived and are finally putting out some buds. But they have been disappointingly short, not the tall plants expected when placed at the back of the garden. Oh well, perhaps they'll take a growth spurt next year . . . 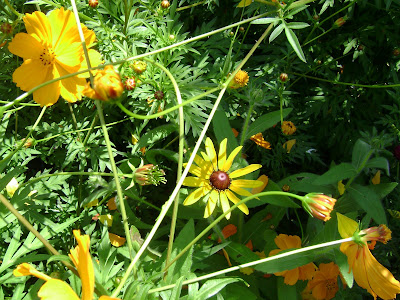 Another native, Rudbeckia "Goldsturm" is also a survivor. The lack of any formal plan can be seen here as this Susan is completely overshadowed by the much taller orange cosmos in front of it.

Could this be the beginnings of a Native Garden?

After the natives were planted, various seeds were sown, each area carefully marked with a neatly lettered plant marker. However, many seeds failed to germinate, and weeds began to encroach upon all bare spots. Several times throughout the summer, in fact, I thought the most appropriate name for this area would be my Weed Garden:) 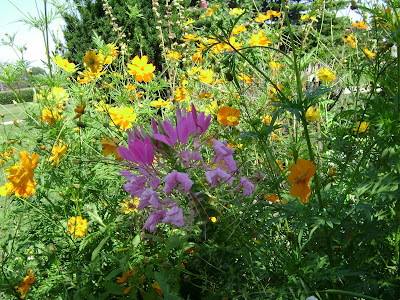 Eventually I gave up on the no-shows and weeded the area ruthlessly, planting other seedlings in their place. Cleome, purchased as a small four-pack, have done extremely well this year, better than the larger plants purchased last year. 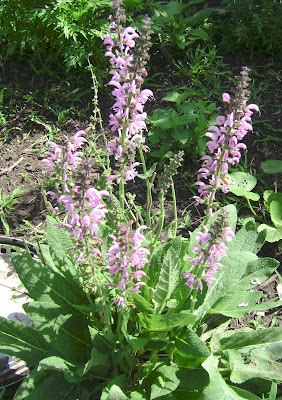 A new perennial pink Salvia, "Eveline, " needed a home and found an empty spot in the garden, as did a new "Black and Blue" salvia. 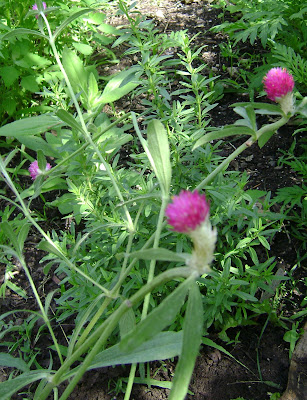 The quirky pink Gomphrena didn't fit in anywhere else, but found a niche in this anything-goes garden. Later, empty spots in the garden provided temporary homes for a few of the new daylily purchases.

Looking at the garden today, perhaps I should call it a Hodge-Podge Garden? 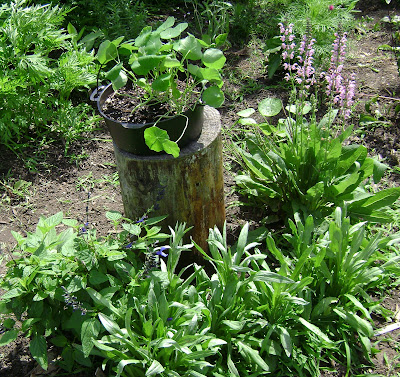 Seed sowing was not a complete failure, however. Remember the cast iron pot I bought earlier this summer? It was planted with nasturtium seeds and placed atop a stump I found. 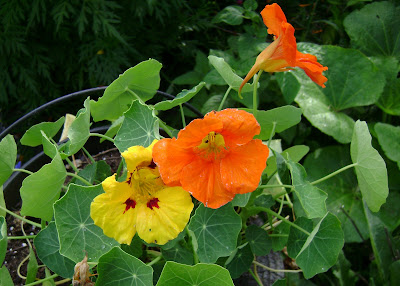 Bright orange and yellow blooms were meant to draw the eye upward, away from the weeds:)

The only problem is that I didn't take into account how tall the Bachelor's Buttons would grow. I love these bright blue blooms even though they hide the potted nasturtiums. Oh well, this is a garden where surprises abound. 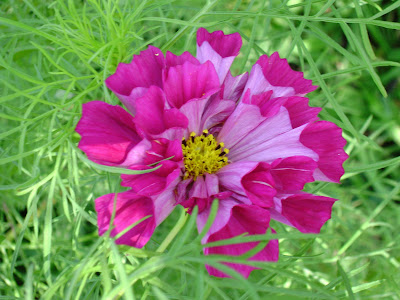 Many of the seeds started indoors last spring either didn't germinate or didn't survive transplanting. Those sown directly in the garden like this pink cosmos seemed to fare better. 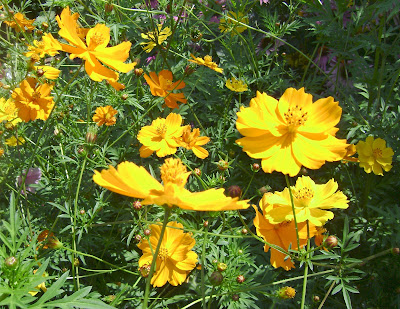 Many of my seeds came from some dear blogging friends, like the orange cosmos pictured above and in the very first photo which came from Tina . They have amazed me with their height and prolific blooms and are the first plant to draw your eye to this area. 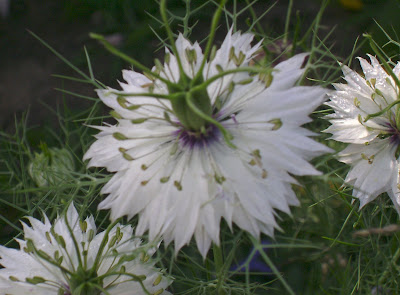 These delicate little blooms are Nigella, or "Love in a Mist," sent from the UK by Cheryl. I should have had more blooms from other friends, including some Tennessee Coneflowers from Gail, "Kiss-Me-Over-the-Garden-Gate" from Monica, and Verbena Bonosenarius from Cheryl. But I think the Tennessee Coneflowers didn't like Illinois soil, and I have a suspicion that the other two may have been mistaken for weeds when they first emerged and fell victim to a ruthless hoe one day. Maybe next year I'll do a little better . . . 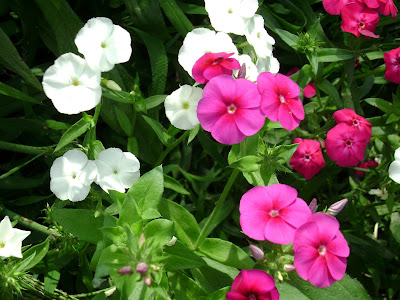 Besides the gift of seeds from friends, I also have passalong plants from Beckie--the false sunflower and goat's beard. Then my father gave me these small annual phlox he had grown from seed.

Maybe I should call this my Friendship Garden? 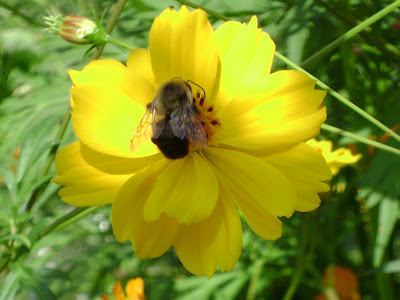 Kneeling in the garden the other day while weeding, I caught the distinct fragrance of lemon and sage from the lemon verbena and the pineapple sage plants. A hint of lavender nearby also reached my nose. Besides the smells and the visual and tactile effects, the garden is full of the pleasant sounds of birds in the nearby apple trees and the buzzing of the ever-present bees.

Another choice . . . the Sensory Garden? 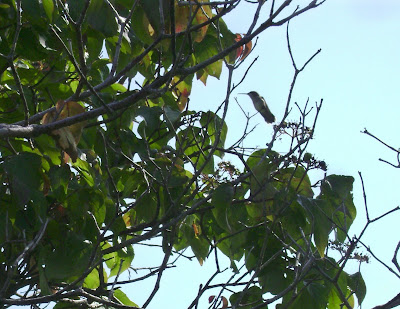 One day I heard a steady hum and looked up startled to see a hummingbird no more than 3 feet from my face. Of course, by the time I had the presence of mind to grab my camera he had flown to a nearby tree. You can barely make him out in the photo above, but I keep trying--he's become a frequent visitor to the garden lately. 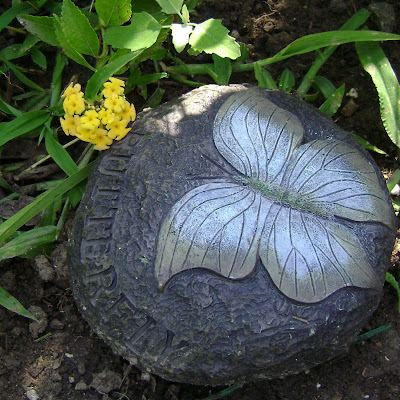 Although there was no real plan to this garden, I did try to plant many species that would attract the hummingbirds and butterflies. Several Bee balm and butterfly weeds are two of those not pictured here. Attracting the hummingbirds has been a success, but the butterflies have been conspicuously absent for the most part. Until yesterday, that is . . . While watering the nasturtiums, a beautiful Monarch butterfly swooped down and rested on the cosmos. Of course, no camera was at hand! I rushed back into the house for the camera, but she had moved on to other areas. 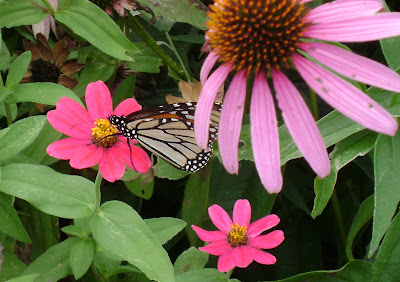 She paused just long enough on this zinnia in the main garden for me to get proof of her existence here, although she refused to open her wings.
I'm hoping this is just the first of more to come---could I dare to call this my Butterfly Garden? 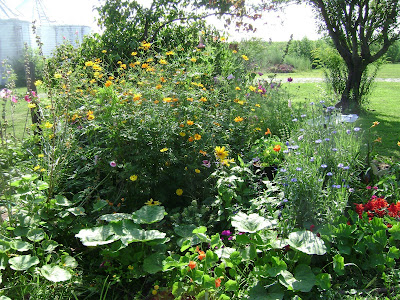 So there you have it--this is what this little garden looks like today. Not a very flattering photo, especially in the bright sunlight. But if you were here, we could explore it together, finding all the little hidden surprises tucked in every nook and cranny and behind the taller flowers. For example, just today I was surprised that a "weed" I had left in place turned out to be . . . 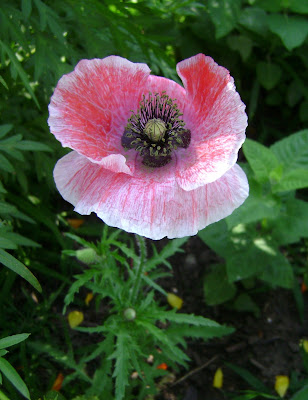 All I need is a name for this wild/native/weed/hodge-podge/friendship/sensory/butterfly garden . . . What do you suggest?
Posted by Rose at 5:00 PM