Unlike last year's weed-ridden and pest-stricken garden, the vegetable garden this summer has been a success. 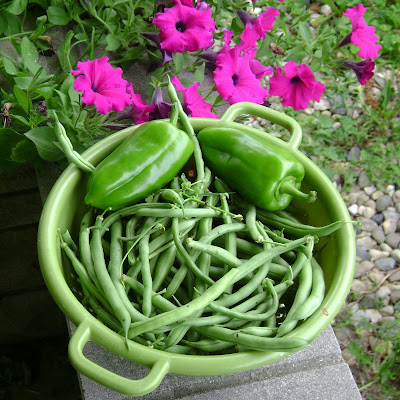 The main headliner for the past month has been the green beans . . . and more green beans. This colander picked one morning hardly shows the amount of beans I have picked--all from less than one package of seed. I had intended to plant a smaller, later planting with the rest of the seeds but never got around to it. Besides, we have had enough for fresh green beans nearly every night of the week plus some for sharing and some for freezing. The green bell pepper plants, "California Wonder," I think, didn't get very big, but they have been producing enough peppers for our needs in spite of their size. 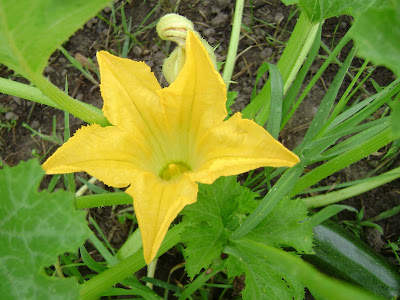 The one zucchini plant I have is still looking healthy--keep your fingers crossed that no squash beetles appear. So far I have managed to pick several zucchini while still small, so we have eaten them sauteed or chopped in a salad. I don't expect the "zucchini explosion" of 2006 from one plant, but if we do, we'll soon be having zucchini bread, zucchini cake, etc., etc. 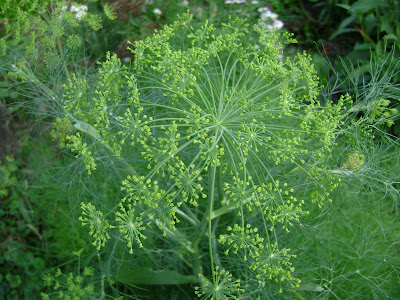 Some of the vegetables were not intended for harvest, but for other purposes, like the dill weed from seeds given to me by Tina. If I had planted cucumbers, I might have used some dill in making pickles or I might add a little dill to dips or dressings. But I just like the looks and the fragrance of dill, which actually is planted in a corner of the Butterfly & Friends Garden. 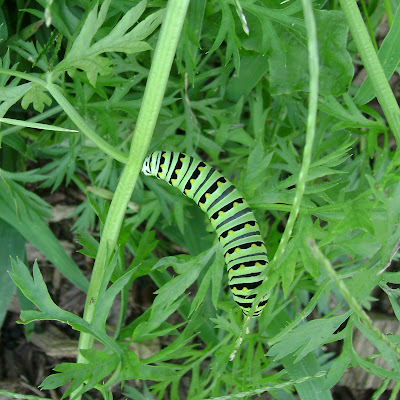 The fennel and parsley could be used as well in recipes, but I planted them primarily as food for the butterflies. My efforts were rewarded one day when I spied this caterpillar on a fennel plant. The next day when I wanted to show my granddaughter the caterpillar, we discovered it had moved to my carrots instead; not only that, but there were now three of them that we could see! Littlest grandson not only looked, but poked at the caterpillars:) If they prefer the carrots, that's fine; I neglected to thin them out earlier this summer, so I may have pencil-thin carrots anyway. 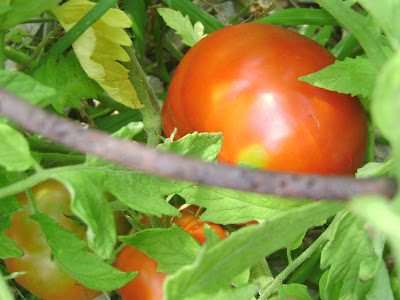 August here at the Prairie also means it's finally time for tomatoes! I've been drooling over all the ripe tomatoes pictured on your blogs for the past few weeks, and finally I can join in the excitement. For our family, this is the main reason for a vegetable garden--fresh tomatoes. The first ripe one, other than a few small red Romas, was picked on Friday, August 14. I couldn't prepare the elaborate presentation that Carol always does for the ritual of the first ripe tomato: as I predicted, my husband sliced it and ate the whole thing before I could even whip out my camera.

By the time you read this post, I will be--hopefully--somewhere in Oregon, helping Youngest Daughter move across the country to attend graduate school. I wrote this post before I left, so I'm hoping that by the time I get back the garden hasn't wilted from lack of water. Husband may forget to water the flowers and may overlook the zucchini growing to monstrous size, but I won't have to worry about the tomatoes--he will pick every single red one he sees! I just hope there are a few ripe ones left by the time I get home:) See you next week!

Check out Tina at In the Garden for other veggie garden updates the 20th of each month.

I almost forgot . . . a very Happy Birthday to my Dad, who turns 84 today! I had hoped to showcase his vegetable garden this month, but ran out of time for taking pictures. Maybe next month--his huge vegetable garden makes mine look like that of an amateur:)