GBBD: Did I Mention It's COLD?

Today is the 15th of the month which means another Garden Bloggers' Bloom Day sponsored by that intrepid gardener and eternal optimist Carol of May Dreams Gardens. I am hoping when I visit Carol this morning that somebody, somewhere--anybody, please??--will have something actually blooming in their garden.

Here in the Midwest, though, we are stuck in a deep freeze. The temperature when I awoke this morning was -13 degrees (that's -25 C), but at least the winds have temporarily died down a little. The wind chill last night was predicted to be between -35 and -45 degrees (that's about a minus 1000 C, I think). Tomorrow is supposed to be even colder. 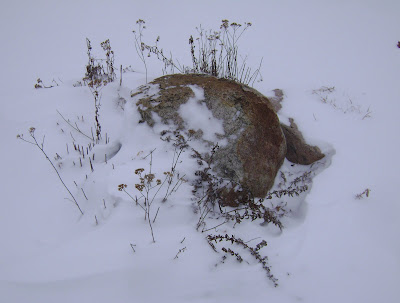 We had only a few inches of snow, but what we did have was whipped around by the high winds yesterday, drifting across roads, my long lane, and the driveway (twice--again after I had shoveled it). Even the faithful yarrow had nothing to show; any green there might be (I doubt it) is buried under the frozen tundra.


I took the photo above yesterday before the winds picked up and while it was a more "comfortable" 9 above zero. Actually, I wasn't outside sacrificing myself for this Bloom Day post; I was out to put more seed in the bird feeders before things got too bad. The birds did appreciate it; maybe one of these days I'll actually have a photo of one. Even Coconut, who normally loves to accompany me on any tours of the garden, decided it was too cold outside to play. 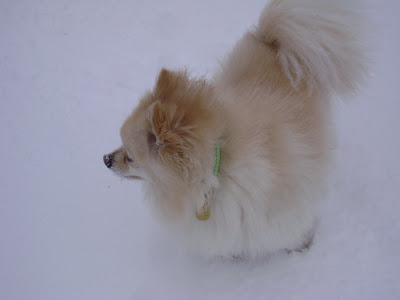 I call this composition "White on White."

I know Coconut isn't a "bloom," but he demanded equal time after seeing so many photos of Toby here, even though he's not very willing to pose for a photo.

OK, enough with the cold . . . let's move inside where (forget the power bills) it's cozy and warm. I'm not a houseplant person, though, and other than the agave I brought home from Arizona and the pots of tulip bulbs I'm trying to force, there isn't much in bloom inside either. 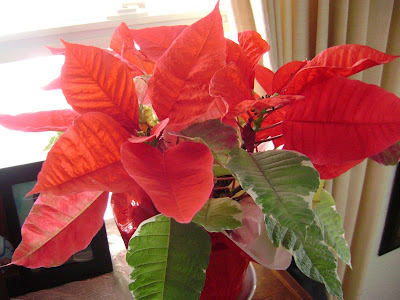 The Christmas poinsettia is still blooming, though. I've never had much luck with keeping poinsettias past one season, so this guy is staying on display until every last leaf falls off:) 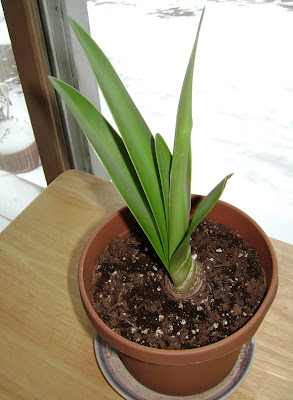 An amaryllis bulb I picked up at Meijer's is slowly growing, but no signs of a bloom yet. I was late in potting up some tulips--my first attempt at forcing bulbs--so I hope they bloom before the tulips outside do. 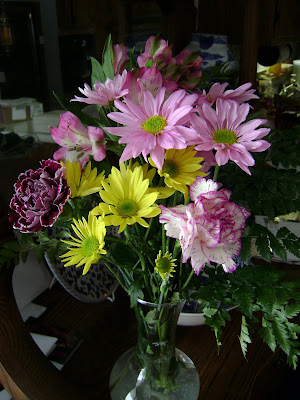 Here are some real blooms to feast your eyes on! Last fall my local Curves was selling a promotional card for monthly flowers from a local florist. For $20 I could pick up a small bouquet every month for a year. That's less than $2 a bouquet, which is cheaper than a grocery store arrangement, plus they are much fresher. But the best part is that half of that cost went to a local charity that provides shelter for women, particularly for victims of domestic abuse. Not bad--some blooms to brighten my day each month and a way to help others at the same time!

Since these are the only real blooms I have, let's take a closer look, shall we? 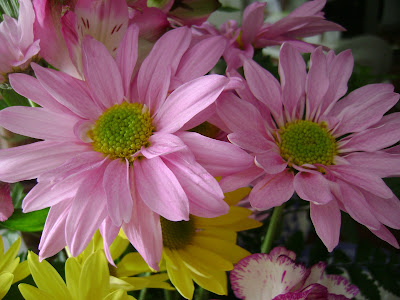 There are bright-eyed pink daisies featured prominently here. Pink is one of my favorite colors in the garden. 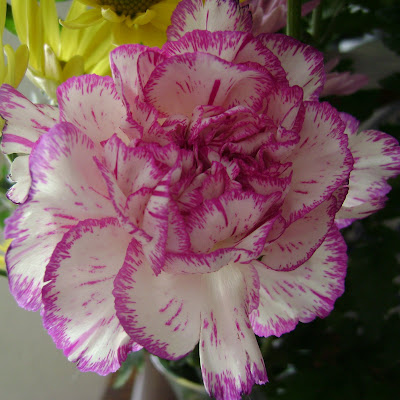 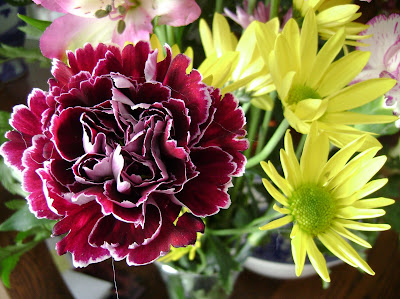 And for contrast, a burgundy carnation tinged in white. A few cheery yellow daisies warm up the whole arrangement.

Oh, I am feeling much better now.