Are you tired of winter yet? If so, how about a little stroll through a sunshine-filled garden with me. No need to put on a sweater--the temperature will soon soar into the 70's. Just grab a cup of coffee or tea--it will take a little while to see all the sights, but I promise not to talk too much.


As most of you know, I visited my daughter in Phoenix in early December, and while there I took a morning to visit the Desert Botanical Gardens. I had visited the Gardens on my first visit to Phoenix back in January; in fact, one of my very first blog posts featured this fascinating place. I was eager to see the Gardens again, but what I didn't know is that I was in for a very special treat. 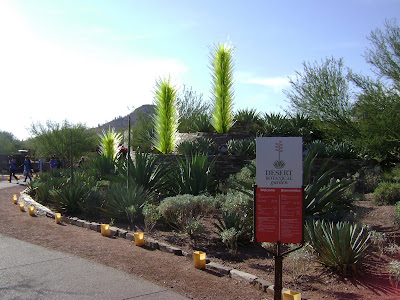 An unsuspecting visitor might wonder what those unusual chartreuse flowers were towering above the succulents at the entrance to the Gardens. I should have gotten the name for these for Mr. McGregor's Daughter who is partial to chartreuse, I know, but I was too intent on photographing them to notice the identifying sign. Besides, there is no botanical name for these. 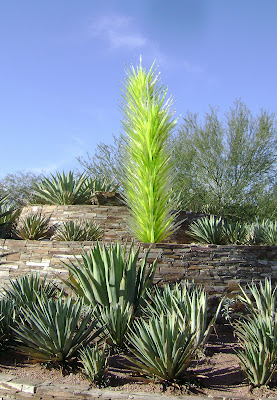 This lovely "plant" is actually a sculpture of glass, part of an ongoing exhibit at DBG by the famous glass artist Dale Chihuly. Fortunately, I had checked out the Garden's website for its hours before going, so I knew that the exhibit was there. If you happen to be in the Phoenix area and decide to see the exhibit, be sure to check out the website first. Because they expect many visitors, reservations are recommended. I was lucky that on this Monday morning they were not that busy and I was able to get in without a reservation. 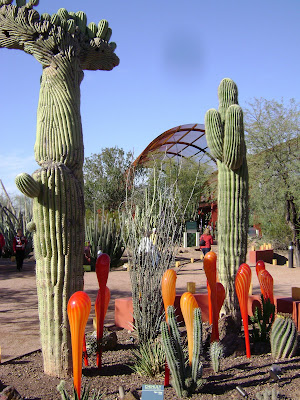 I came to admire the cacti, like the saguaros, but it was impossible not be entranced by the art strategically placed around and among them. This piece is called "Tiger Lilies." 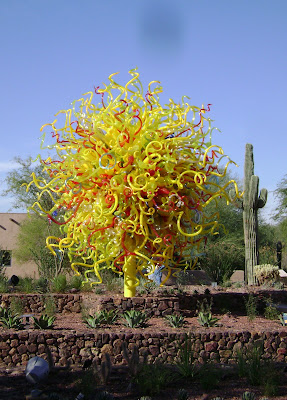 I took so many photos on this morning, but many of them were of the identifying signs so I wouldn't forget the names of some of the more unusual plants I saw. Unfortunately, in my eagerness to get the best angle for a photo, I often forgot to take photos of the signs accompanying the artwork. Hmmm, I'm guessing this is some kind of tree--what do you think? 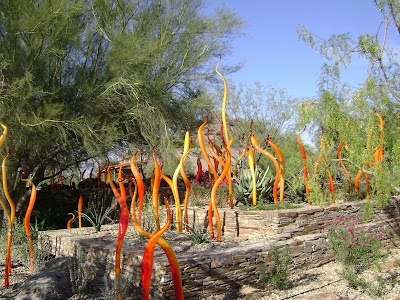 Another unidentified piece placed among the succulents and shrubs with mesquite and Palo Verde trees in the background. Don't they look like flower stems waving in the breeze? 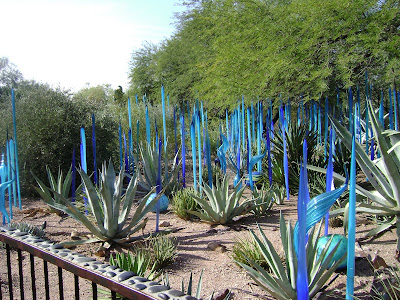 This was one of my favorites--blue is my favorite color, after all. Besides the tall spikes rising among the agave, you might also notice some large blue balls as well. 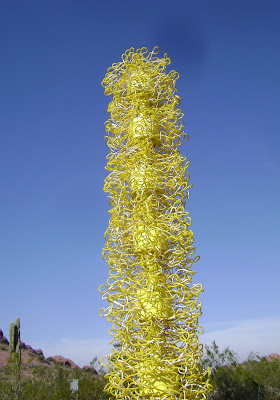 This was one of the most unusual pieces, set on a higher slope of the Gardens so that it appeared even taller than it already was. If you enlarge this, you might be able to see that is made up of numerous twists of glass tubing. I wish I could have gotten a better picture--a visitor on a cell phone(!) was standing right next to it, blocking my view. At least I did get the name of this piece--"Saffron Tower." Think of all the dishes Frances could flavor with this much saffron! 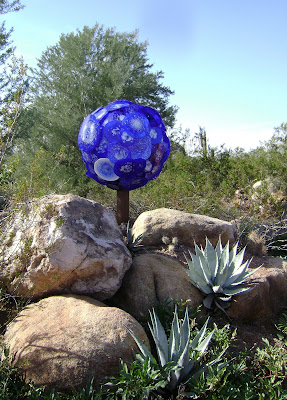 Another piece whose name was hard to miss was this one--"The Moon." Just the sheer size of some of Chihuly's work was amazing, but look even closer to be further amazed. 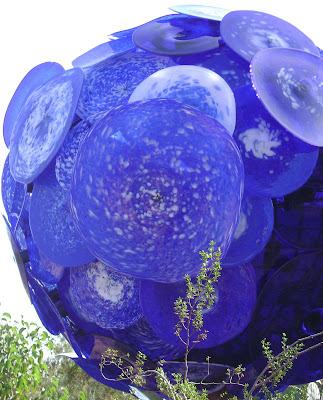 Is there such a thing as plate tectonics on the moon?? I have no idea how this piece was constructed. 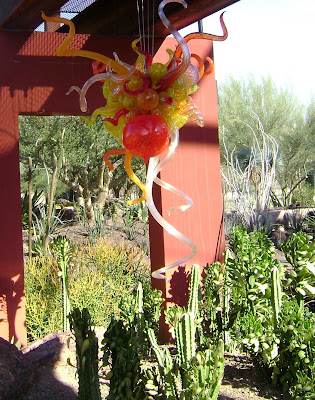 Although I had heard of Chihuly before, I must admit I knew very little about his work. And I'm not much of an art connoisseur, but I am now a big fan. His work ranges from the whimsical, such as this "Crimson and Yellow Chandelier" . . . 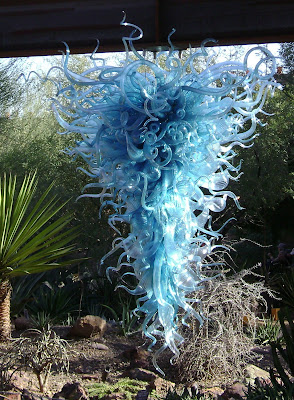 . . . to the magnificent, including this piece, "Chiostro di Sant' Apollonia Chandelier." Can you imagine this hanging from the ceiling in your foyer?! 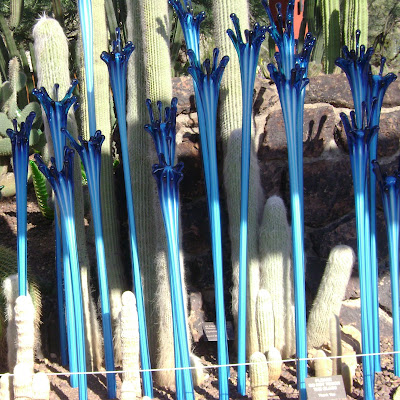 I would love to have these "Blue Fiddleheads" growing in my garden. 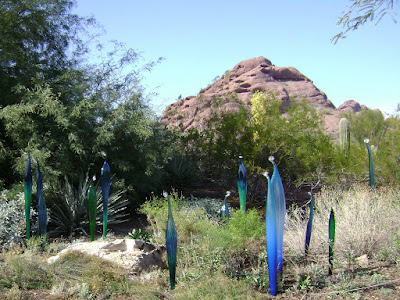 I mentioned this exhibit briefly in a post when I first returned from Arizona, and several people commented that they had seen the exhibit in Missouri or other Botanical Gardens. Until that time, I wasn't aware that Chihuly's exhibit had traveled to other places. Every work seemed to fit in so well that it appeared as though he had created each piece specifically for each area of the DBG. These "Blue and Green Ferns," for example, seem like the perfect complement to this area of native shrubs with Papago Peak in the background. 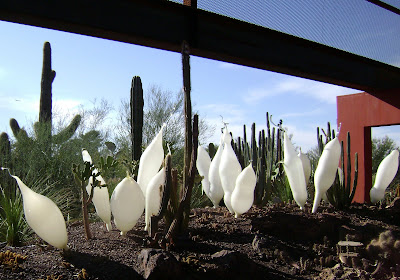 Of course, there were a few surprises. Who would have expected some sea life in the middle of the Sonoran Desert? This photo doesn't do them justice, but the "White Belugas" seemed perfectly at home here. I like an artist who has a sense of humor. 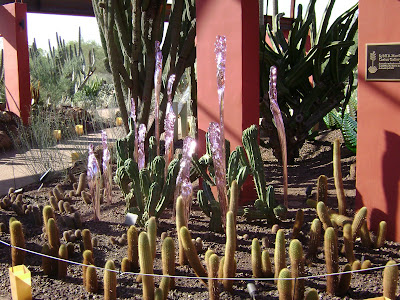 The scope of this exhibit, "The Nature of Glass," was impressive. There were so many works of art that you never knew what to expect as you rounded each part of the trail. These pink spires (name now forgotten) seemed to grow naturally among the small cacti here. 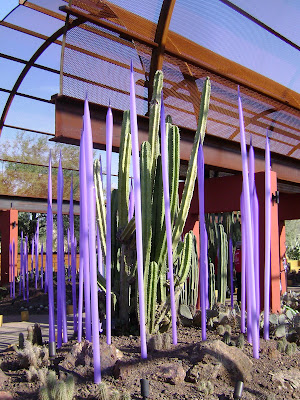 As did the tall purple stalks in front of the organ pipe cactus. 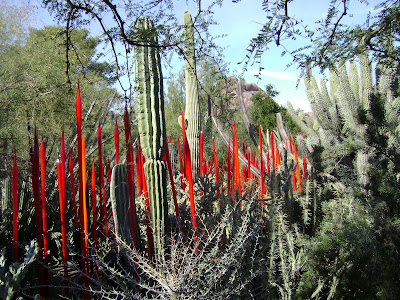 Red spikes in another area gave a jolt of color to the otherwise green landscape. 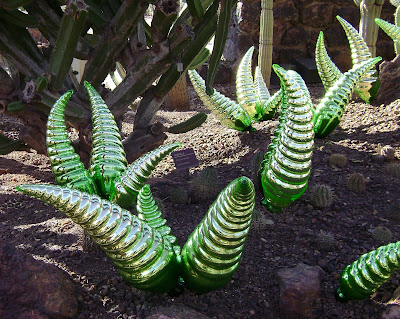 If the sun hadn't been shimmering off these "Mirrored Hornets" and if you were a little myopic, you might have thought at first glance that this was a planting of agaves. 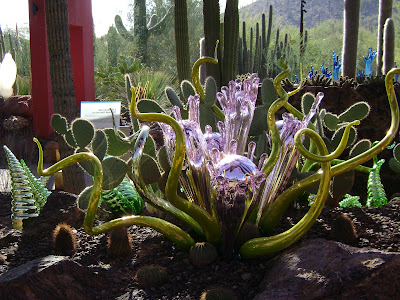 Although most displays contained one color scheme, in a few areas several works were combined for a dramatic display. This piece just blows my mind! At first glance while going through my photos, I thought this was purple glass placed in the center of a succulent. But a closer look revealed that the green bracts are also glass. You really need to enlarge this photo to see the magnificent detail. Notice the "Mirrored Hornets" around it with the "Blue Fiddleheads" in the background.
The Chihuly exhibit will be on display at the Desert Botanical Gardens through May of this year. If you are in the Phoenix area, I would definitely make this part of your itinerary. If you can't make it to Phoenix, check out Chihuly's website; although "The Nature of Glass" is not currently scheduled to appear elsewhere, it may be after May. Also, check out Cosmo's latest post; she is currently in Phoenix and also visited the DBG. She has a couple fantastic photos of some of the art at sunset, and she plans to have a more complete posting later. 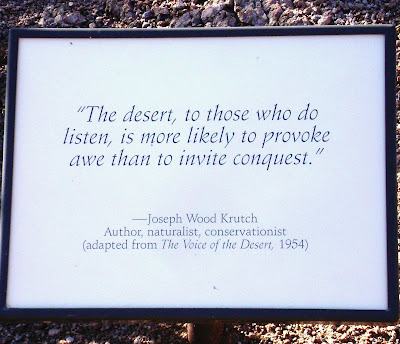 I have become fascinated by the plant life of the desert, but you will notice I don't have many plants shown here--I have so many photos that I decided to do a second post just on the plant life, probably next week. I came to the Botanical Gardens to learn more about these Southwest natives, but I found so much more. This was the ultimate combination of nature and art.