This week we have reached the end of the alphabet, and we should probably have a little razzle dazzle to celebrate. But long-time readers will not be surprised by my choice from the garden for the letter Z. What else, but that annual dazzler... 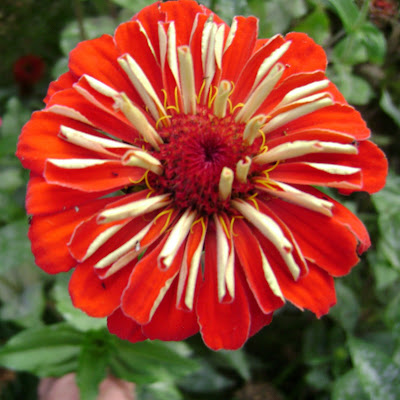 Did you guess my choice beforehand? Anyone who read my posts this past summer knows how thrilled I was with these old-fashioned annuals.
For anyone who doesn't remember, just a little background is in order. I expanded my roadside garden last spring and couldn't decide what kind of taller perennial to plant in the back. Then I remembered Lisa had posted some photos last winter of her summer garden with a wide row of zinnias she had sown from seed. I hadn't planted zinnias in years, but hers looked so beautiful I decided to try them. Besides, spending a few dollars on packets of seeds rather than spending 10 or 20 times that on perennials seemed like a great temporary solution. If I found a perennial that fit the spot, I could always plant it next year. I purchased a mix of the tall variety of zinnias and sowed the seeds directly in the ground. Despite a flood immediately after, most germinated and bloomed by August. The stems grew straight and tall, never flopping over, and tolerated both wet and dry feet, not to mention neglect by the gardener. From August until late October they provided a nonstop show of bright blooms in nearly every color. They called out to passersby and brought a smile to my face every day as I came home. All summer long I wondered, why hadn't I planted these lovelies before? Instead of looking for a perennial as a backdrop, zinnias will again be planted in this spot this summer. 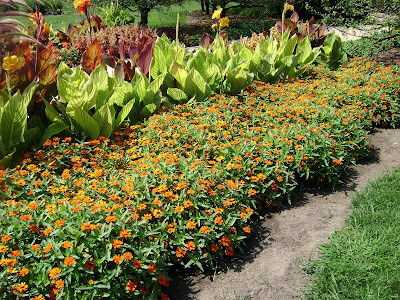 Besides these tall beauties, there are many other varieties of zinnias, including the ever-popular profusion series. While I usually use the Profusions in container plantings, they can also be planted for a mass of color like this bed on the U of I campus near the Idea Garden. If you would like to know more about zinnias, you can check an earlier post I did this summer on these faithful flowers.

These scenes from summer are only a memory now, and unfortunately, it will be many months before we see such displays of color again. 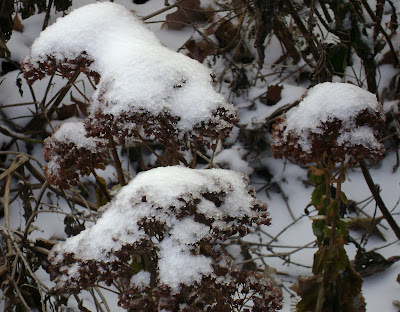 Instead of vibrant colors and sunny skies, the temperature tomorrow is supposed to dip below Zero. Rather than working in the garden, it's a good time to crawl under a blanket . . . 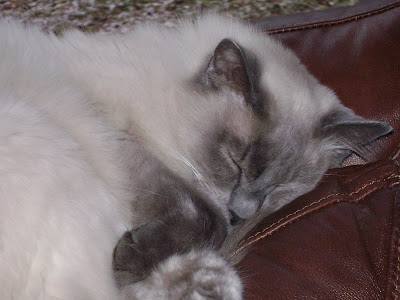 . . . and catch some Zzzz's. I think Toby and I might hibernate until spring!