ABC Wednesday and Another Game of Tag 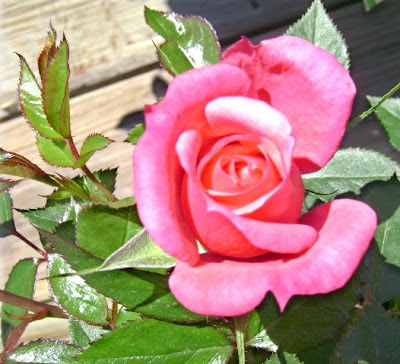 ....Rose, what else??!!
ABC Wednesdays are brought to you courtesy of Mrs. Nesbitt's Place.
Before you marvel at my beautiful rose, I have to confess this is not in my garden. I sneaked this picture at a local garden center while on yet another plant shopping spree. I wanted a photo of a rose to fulfill the ABC Wednesday meme, but I also thought it provided a nice segue into the rest of this post. As I said on Monday, I been tagged several times in the last several weeks, and I want to respond to them today. Suburbia tagged me eons ago, and VP last week; since they're somewhat similar tags, I thought I could do both in one post.
Suburbia, who writes clever and witty posts about everyday life, gave me the assignment to answer the following questions:
1. What were you doing 10 years ago?
Ten years ago I was in a constant state of motion: teaching all day, attending my girls' activities most nights of the week, and squeezing in grading papers and doing housework in the little time left.
2. Name 5 snacks you enjoy.
Dark chocolate, cookies, crackers, doughnuts, and more dark chocolate. (And I wonder why I can't lose weight!)
3. Things I would do if were a billionaire.
That's a tough one: Give some money to each of my children to help them pay off college debts and make their lives easier. Set up pre-paid college accounts for each of my grandchildren. Travel (definitely!). Buy season tickets to the Cubs' games and Illini basketball games. Hire someone to landscape my yard, complete with a fountain and pond. And with the 999 million left, set up a foundation for charity.
4. Five jobs that I have had:
Filing clerk at a bank, fast-food worker, cafeteria worker, clerical assistant to a professor--all of these were summer or part-time jobs before I finally started teaching, which I did for 34 years.
5. Three bad habits:
According to my children, I sigh a lot.
Procrastinating (not good when you're married to Mr. Procrastinator!)
Spending way too much time blogging!
6. Five places I have lived.
Actually, other than two years spent at college in Minnesota, I have lived within a 10-mile radius of the same small town my whole life.
7. Five people I want to know more about:
William Shakespeare
Barack Obama
Zora Neale Hurston
Cheryl at My Wildlife Sanctuary
You, Suburbia!
And now from VP, who writes about gardening on an allotment, as well as numerous other topics. Her assignment is shorter: to list 6 random facts about yourself.
1. I don't believe in astrology, but I am a true Gemini. This may explain why one day I have a serious post about gardening, and the next something silly or satirical.
2. I can't swim.
3. I am athletically challenged (read: klutz)
4. I have been married for almost 39 years ( to the same husband).
5. My secret ambition is to be a novelist. (Another one is to be the lead singer in a rock band, but I think my voice, or lack of one, will prevent this from ever happening.)
6. This one's embarrassing: I voted for our Governor Blagojevitch the first time he ran, but soon saw the error of my ways and did not vote for him the second time. (For all you not living in Illinois let me just say that he will probably be spending his retirement in a prison cell near our previous governor!)
7. I am addicted to dark chocolate.
You know the rules--I am supposed to tag 5 or 6 people at this point, and I really was going to. But the more I thought about it, those of you who are primarily garden bloggers are very busy right now in the garden and would probably prefer to show off your flowers in bloom. And the rest of you have already been tagged, I think, so once again I am going to break the rules. If anyone would like to respond to this tag, feel free to share some personal insight with us. If not, the tag may stop here; I've broken many a chain letter, too, and haven't suffered any dire consequences yet.

If you can bear with me, though, while I am on the subject of revealing myself, I wanted to add just a little bit more that isn't part of the tag. As a child, I wanted to be a princess like many other little girls. I even went so far as to fantasize that I had been switched at birth, probably with Prince Charles and was the rightful heir to the throne of England. No matter how ridiculously improbable this was or that we didn't even have the same birthdays. Of course, I did think my ears stuck out too much when I was little.
Over the years I admired the sophisticated poise and beauty of Princess Grace of Monaco and later that of the the lovely Princess Diana. But a princess I could never be! It's not just my lineage, but my lack of grace that completely rules that out. Let me explain.
I care about my appearance and rarely go out of the house without at least a little bit of make-up and some primping of my hair. But no matter how hard I try to look nice, something frequently happens to remind me I'm no movie star. There was the infamous pantyhose story where I found myself at school with an extra pair of pantyhose stuck in my pant leg with the toe hanging out. That incident has become a legend among my friends. A few years ago I wore a new pair of jeans to school on a Friday ("jeans day"), and walked past a giggly group of girls at their lockers. One of them asked, "New pair of jeans, Mrs. F?" I answered, "Yes," thinking how nice of them to notice, mistaking their giggles for something else. When I walked past their smiling faces a few minutes later, one kind soul took me aside and said, "You still have the tag on, Mrs. F." I looked down, and to my horror discovered that the large clear tag proclaiming the size was still attached in plain view on my pant leg. I might as well have been wearing a banner proclaiming, "I have new Fat Lady jeans!"


Then there are my many mishaps with food: I often wear my dinner, it seems. When my girls were still in high school, I was usually on the run, sprinting from work to one sports activity after another. I frequently grabbed a sandwich at a fast food drive-thru and ate it while driving 30 or 60 miles to one of their ballgames. Everyone is aware of the dangers of eating while driving, I'm sure. Sure enough, I invariably wound up at my destination with an enormous catsup or mayonnaise stain on my shirt.

Even drinking coffee can create problems for me. Recently I was substituting all day for a special education teacher's classes. I'm not used to working 8 hours a day anymore, so I brought a thermos of coffee with me. It wasn't until the end of the day that I realized that sometime during the afternoon I must have spilled some on me. These students were a very nice group, which was confirmed when I realized they were all too nice to inform me that I had a huge coffee stain on the front of my light aqua sweater. A similar incident occurred when my daughter and I visited Disneyland a year ago. While she rode one of the scarier rides, I found a place to sit and drink a Starbucks grande to ward off the surprising evening chill. Of course, I managed to dribble it all down my shirt, and then had to walk around the park the rest of the evening with my arms folded in front of my chest. My daughter thought it was very amusing and had to take a picture. 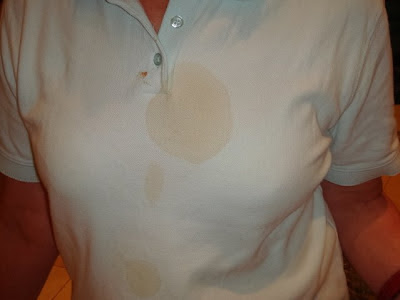 I was a good sport in letting her take the picture, obviously, but I later discovered that she had posted this picture on her page on Facebook! This is the only image her online friends have of "My Mom."


Then there are the things that are not my fault. Last fall we attended all the Illinois home football games with my son and his family. I was a constant source of amusement to my son, especially, with my innocent questions about football. (Who knew that yellow line marking the line of scrimmage only appears on TV??) At one game, though, my daughter, who was sitting behind me, asked me what was in my hair. Upon careful inspection, she discovered it was bird poop! Out of 40,000 people in that stadium, a bird decides I am the perfect target to defecate on. Such is my life.


You might think that I have chosen to hide inside my house, avoiding embarrassing myself and my family and friends. But I haven't. I've discovered over the years that life is much more enjoyable if you can laugh at yourself, which I do....often. So if you happen to see a tall, blonde woman walking down your street or in an airport or mall wearing clothes with the tags hanging out, bird poop in her hair, and a large stain on her shirt, wave and smile. That's probably me!
Posted by Rose at 6:48 AM