Fall has definitely arrived in my part of Illinois with cooler nights and frequent rainy days.  Monday morning I awoke to find the whole yard had turned white--the first frost of the season.  Fortunately, nothing in the garden seems to have been affected by the frost.  Thanks to all the rain the last several weeks, annuals and perennials are looking better in September than they did in July.  The butterfly garden especially has come alive, due to the fall-blooming natives that have almost taken over this area. 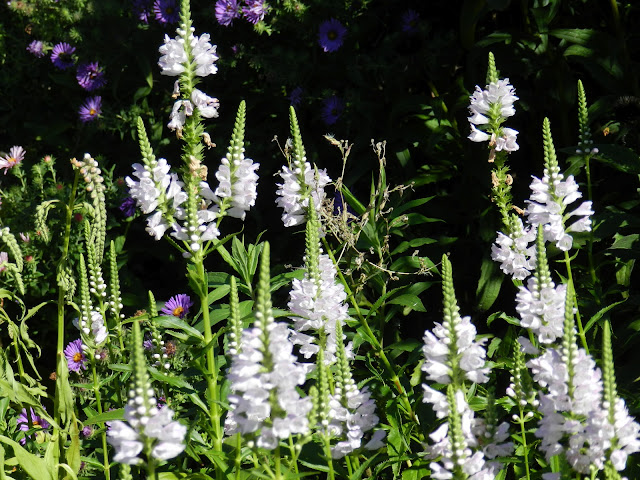 One of those natives is Physostegia virginiana, commonly called Obedient Plant.  A member of the mint family, Obedient Plant grows up to four feet tall with flowers that are purplish, pink, or white.  This is the first year that all the blooms I have are white, rather than pink, which may mean that they are reverting back to their wild state, since those plants tend to have mostly white blooms.  It is pollinated primarily by bumblebees, though other long-tongued bees and hummingbirds may also visit it.

Sometimes called False Dragonhead as well, the plant was given the name "Obedient" because the individual flowers stay in place if you move them.  I'm not sure why anyone would want to have blooms facing a certain way, but hey, if that's important to you, then who am I to judge:)


Not everyone loves this plant--in fact, some would go so far as to call it a thug or even invasive.  Most references are a little kinder, but do warn that especially in moist soils it can "sometimes spread aggressively."  My butterfly garden was anything but "moist" this summer, yet the Obedient Plants did just fine; in fact, I think they're determined to take over this area, if given the chance.  As I looked at all the seedlings that came up this spring, a question came to my mind.

Why do we plant something when we know it could spread so rampantly?  After some careful thought, I've come up with a few answers, but feel free to add more in a comment.

1. Ignorance. Most people know that you should never plant certain species like purple loosestrife or some types of honeysuckle, plants that top most states' invasive plant lists.  But plant tags on other species at garden centers or plant sales don't always tell you that something could take over your garden.  When I first started my butterfly garden several years ago, I was just learning about native plants and was excited when I found out the local Prairie Plant Society was holding a plant sale in May.  My friend Beckie and I went to the plant sale, where I picked up several natives that I knew were attractive to butterflies, including a Joe Pye Weed and an aster.  Then I noticed the Obedient Plant and snatched it up as well--I remembered reading about it on someone's blog the previous fall, but I didn't remember any of its characteristics, unfortunately.

I've often told the story of that first little Obedient Plant--how it grew to two feet tall that summer, until one day Sophie, still a rambunctious puppy then, bounded through the garden and broke off the stem.  I was upset, thinking that was the end of it.  But to my surprise, the following year it came back--and had multiplied more prolifically than a rabbit!  Fast forward to this spring, when I noticed Obedient seedlings covering at least a third of this small garden area. If I hadn't pulled out at least half the seedlings, they would have choked out some of the Susans and other plants that aren't quite so aggressive.  I have learned my lesson--before I buy an unfamiliar plant, I do a little research first.  "Aggressive spreader" or "spreads by rhizomes" are red flags that I probably don't want to add this plant to my already crowded garden, no matter how pretty it may be.


2. You can contain it some way., whether in a pot or an enclosed area. I've learned that bamboo is a notorious spreader and difficult to eradicate once it's established.  Yet I know gardeners who grow it and other invasives in large pots or in an area enclosed in some way, whether by rocks or other types of edging.  As long as the plant doesn't have seeds that could be spread by wind or birds, this method may work for a plant you simply must have, no matter its aggressive tendencies.

3.  You have lots of space and could use something that multiplies quickly. Many of us have an area where nothing seems to grow, including grass.  For me, it's an area next to my shade garden in front of a very large spruce tree.  The soil is hard clay, and thirsty tree roots drink up most of the rainfall, yet garlic mustard and a few other weeds still seem to thrive. I've transplanted a few errant lamium--another "spreader," but much better-mannered than some--in part of this area, as well as liriope and some ajuga.  The lirope hasn't done much, and the ajuga, along with some free toad lilies I received, seems to have disappeared in this summer's drought. I wouldn't mind something that spreads rather quickly to cover the bare soil and choke out the weeds in this area.


4. Just because it's considered invasive in some areas doesn't mean it will be in your garden. Another blogger recently commented that lantana had now been labelled somewhat invasive in her state.   In my zone 5b garden, that's certainly not a problem because lantana is not hardy here; in fact, I buy a flat of it every spring.  My friend Beckie tried for years to control the false sunflowers, Heliopsis helianthoides, that were overtaking her garden.  When I asked for a few starts, she gladly gave them to me but with a warning that I might be sorry.  Naturally, they all died for me.  I tried a second time, and this time they survived.There are still a few of these in the butterfly garden, but with all the other thugs around--like Obedient Plant--they haven't had a chance to spread.  So an invasive plant in one place might not be so aggressive in another . . . of course, it's up to you whether you want to take that chance!


Sometimes even the most experienced gardeners make mistakes and plant something they later regret.  But let's face it, there are some "spreaders" that are so appealing in some way that we are willing to take a chance and grow them anyway.  Sweet Autumn clematis is a good example. It is listed on the Illinois list of invasive species, yet I see it growing in so many local gardens, with good reason--its blooms are beautiful this time of year.

As for my Obedient plant, I'll continue to pull out excess seedlings in the spring because I think these pretty late-bloomers are worth it.  But if you decide to add some to your own garden, just remember that I warned you these natives are anything but obedient!


Wildflower Wednesday is celebrated the fourth Wednesday of every month and hosted by Gail at Clay and Limestone. You are welcome to join us in celebrating all things native!
Posted by Rose at 7:51 AM