Experience is the best teacher, the old saying goes.  That is certainly true when it comes to gardening.  I have learned so much the last few years through the Master Gardener program and various gardening seminars and talks, through reading garden books and magazines, and of course, through reading garden blogs.  But there's nothing quite like the actual "doing"--and making mistakes along the way--for learning what works in your own garden and what doesn't.

Every season I learn something new or re-learn an old lesson that I should have remembered, so I am joining in once again with Beth of Plant Postings' "Garden Lessons Learned from the Summer of  2012."  Among the many lessons taught me by this hot, dry summer are these:


1. Summers in Illinois can be very hot.
Duh.  I have lived in Illinois my whole life, more years than I care to admit, so you would think I would remember this.  But every year when spring arrives, I am as giddy as a young teenager experiencing her first crush, tiptoeing through the garden to admire every tulip and daffodil in bloom.  I start making plans for all kinds of garden projects and make frequent visits to nurseries, coming home with trunkloads of trays filled with all kinds of annuals.  List after list is made of what needs to be planted where and garden chores to be completed each day.

This spring, inspired by my trip to all the lovely gardens of Asheville and motivated by guests coming one day in late June, I worked as much as possible in the garden.  But then the thermometer soared to 90 and climbed even higher, and I melted into a sweaty blob of inertia.  For the next six weeks about the only thing that got accomplished in the garden was watering.


So what can I take away from this lesson to make next year more enjoyable?

2. Plants need rain.
While I was somewhat tongue-in-cheek earlier, the drought this summer was no laughing matter.  As much as I avoided the heat, I did drag myself outside as early as I could each morning to water all the containers and set up sprinklers for the garden, dashing out again every hour or so to move the sprinklers around.  But plants know the difference between well water and pure rain, and they just weren't happy.  As tiresome and frustrating as the lack of rainfall was for me, it didn't compare to those whose livelihoods depend on a good growing season.  Some farmers in the state had to cut down or plow under crops that withered in the drought. 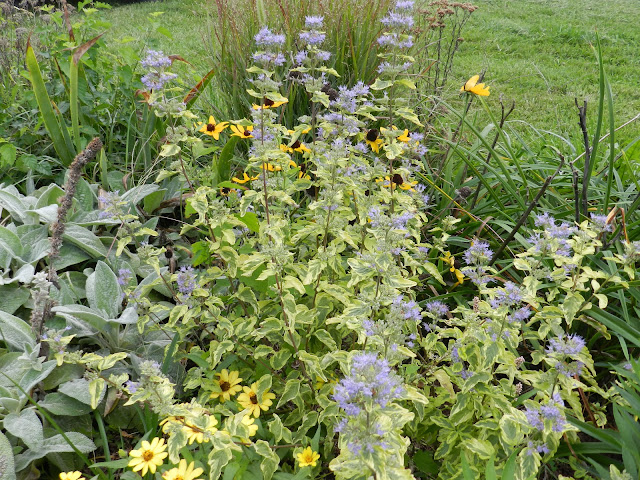 3. Some plants need extra nutrients.
Annuals, particularly those in containers, really benefit from regular applications of fertilizer throughout the season.  Even though I used potting soil with plant food mixed in--the only kind of potting soil our local garden centers sell, it seems--it doesn't take long for the plants crowded together in a pot to use up most of the soil's nutrients.  I usually buy a commercial fertilizer that has extra phosphorus to boost bloom production and try to apply it every two weeks.  This year, however, I kept procrastinating, thinking a rain would be nice before applying it, and never got around to fertilizing more than once all summer.  As a result, most of my containers are looking pretty ratty right now, even the varieties of petunias that are usually so dependable for me.  The lesson is clear: if I want pretty containers all summer long, I need to vow to maintain them, which means a regular schedule of fertilizing.


4. Some plants are prolific self-seeders.
In several posts over the summer I've mentioned the nicotania and the Salvia farinacea that nearly took over my arbor bed this year.  But there were other volunteers I was surprised by as well, including the cardinal vine.  I forgot to plant some seeds this year, but not to worry--I soon found out it had re-seeded itself all around the arbor bench.  Over the summer, I've found tendrils of this vine wrapped around other plants as far as six feet away.  That rapid growth may sound a bit worrisome, but it is easy to snip the straying tendrils, and a more diligent gardener than I should have no trouble keeping it under control. The hummingbirds love this plant; I watch them every morning flying around the arbor bed, passing up the nectar feeder for the real thing--red blooms they love. 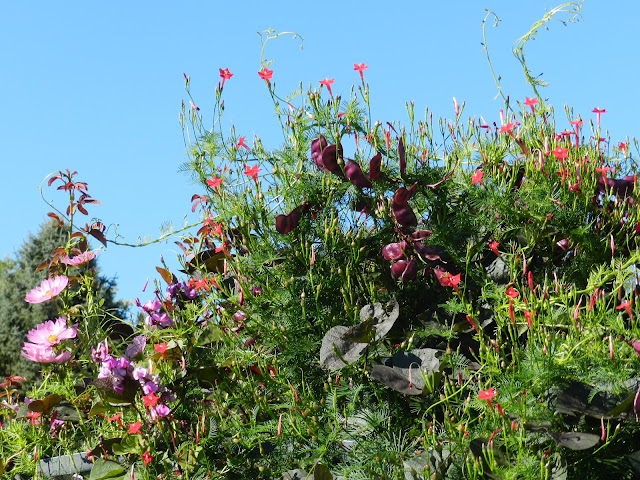 Here's the bigger picture to show how things get out of control in my garden--the cardinal vine has wrapped around the hyacinth bean vine as they both race to the top of the arbor trellis.  Those are cosmos to the left, by the way, planted directly behind the bench, some of which are easily six feet tall.

Actually, the conclusion to this lesson isn't definitive yet.  Whether these plants normally re-seed so easily or whether they simply survived the mild winter remains to be seen.  I guess I'll know for sure next summer.

5. Foliage can be just as eye-catching in containers as blooming flowers.
I admit it--a handsome face can turn my head.  When I am plant shopping in the spring, I am drawn to the rows upon rows of colorful flowering plants.  Oh sure, I like coleus and caladiums, too, and have a hard time choosing my favorites of these to buy.  But I always think of foliage as the accent in a container, not the center attraction.  However, when I finished planting all my containers this spring, I found I had only a few Profusion zinnias left and one extra coleus for the last container.  What to do?  Go shopping for more blooming plants?  Not a good idea, since I always seem to come home with twice as many as I intended to buy.  Besides, I was tired and just wanted to get this finished.  So I planted both coleus in the pot with the remaining zinnias in front. 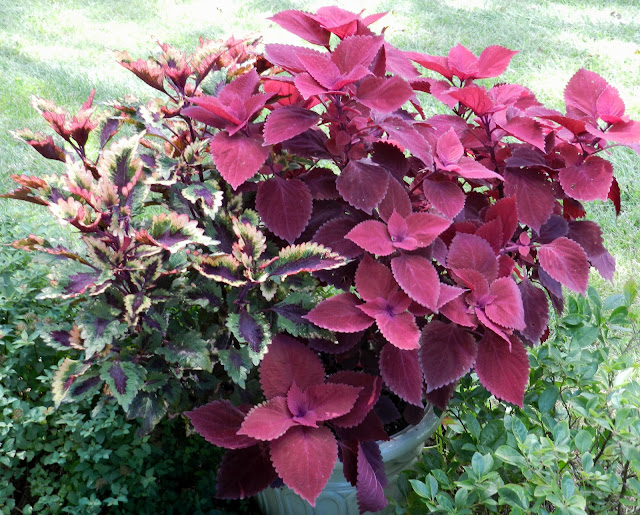 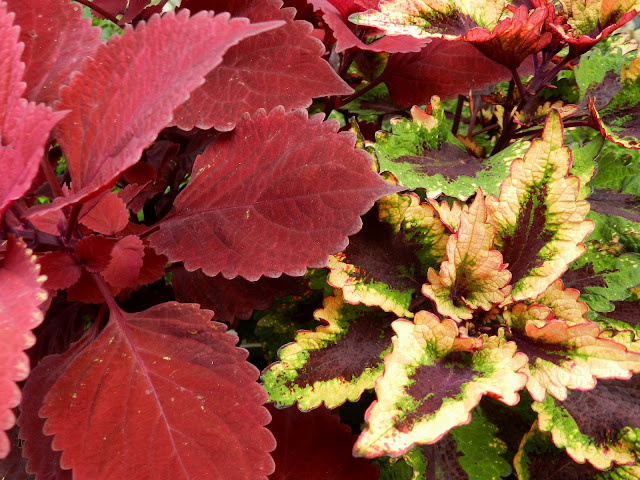 Guess what?  When I come home, the first thing I notice as I drive up the lane is not the bedraggled petunias in the hanging planters or (almost) trailing down the porch planter, it is this pot.  The burgundy and shades of gold of these coleus really stand out against the greenery of the nearby shrubs.  Lesson learned:  plant more pots of primarily (or all) foliage next year! 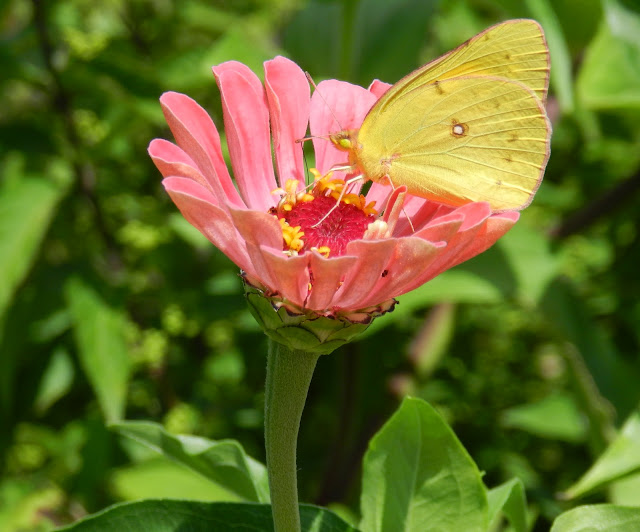 6. Butterflies love zinnias.
Of course, I already knew this--I just wanted an excuse to include this photo:)  Actually, I did learn a new tidbit of information about butterflies this summer.  I attended a talk on butterfly gardens last month where I learned that butterflies enjoy a landing pad where they can rest for awhile, which accounts for their preference for plants like zinnias and coneflowers.

7. And finally, be patient.  Remember nothing lasts forever.
There's an old saying in Illinois (and probably every other state) that "if you don't like the weather, just wait a few minutes, and it will change."   I whined much of the summer about the heat and the lack of rain, but August and now September have provided some welcome relief with cooler days and most importantly, some much-needed rainfall.   The garden is starting to revive, and my enthusiasm for tidying up the garden has returned.


It was a tough summer, but I learned some valuable lessons.  Best of all, my garden survived.
Posted by Rose at 8:50 PM