There's a party going on in my butterfly garden! 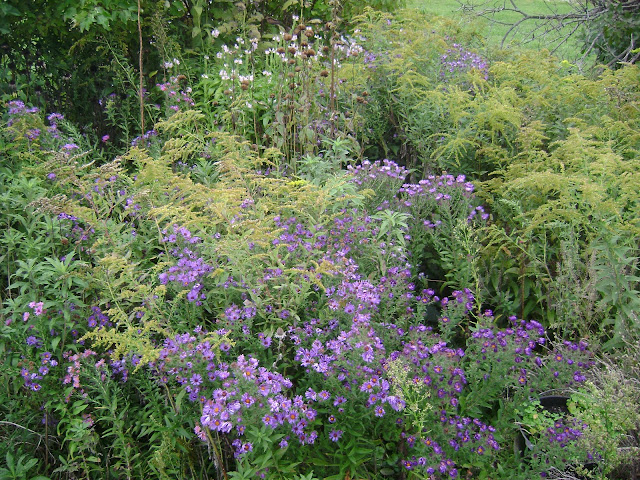 Apparently, the natives heard it was time for Wildflower Wednesday and decided to celebrate. I've been preoccupied with non-gardening related activities the past two weeks, and so, like some unsupervised teenagers, they decided to call up their friends in my absence and have been partying with wild abandon. 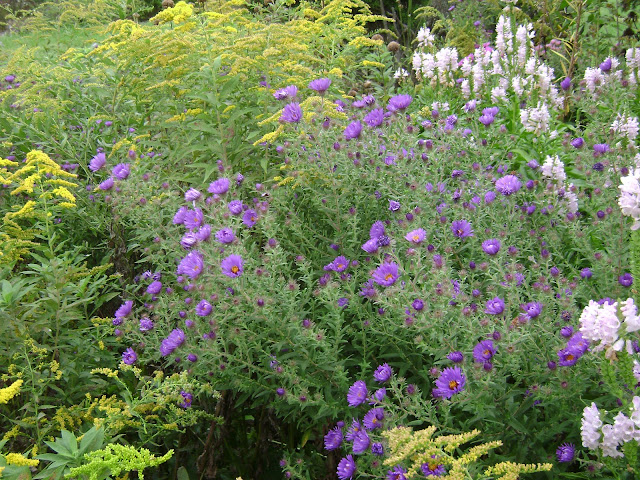 Once upon a time--well, two years ago, to be exact--I planted one Obedient Plant Physotegia virginiana and one native aster, probably a New England Aster whose botanical name I don't know, purchased from the local prairie plant society.  Since then, they've multiplied and spread throughout the butterfly garden.  The goldenrod was never invited, but since it lived nearby,  it decided to crash the party. 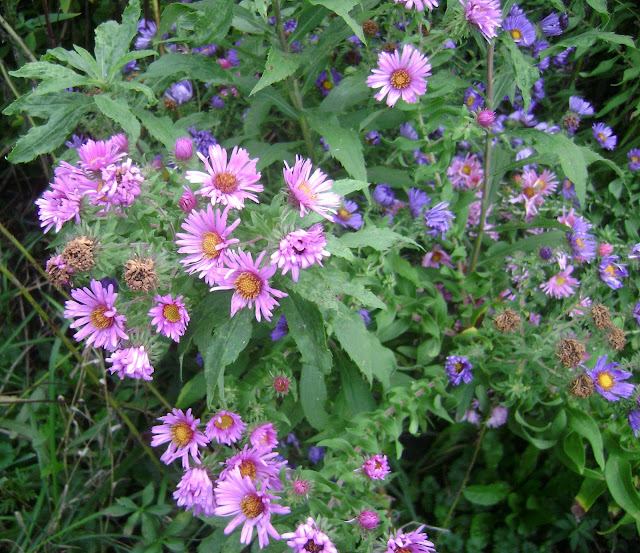 The purple asters decided this year to invite their pink cousins to join in the fun.  I was certainly surprised to see them in attendance, but I really don't mind. 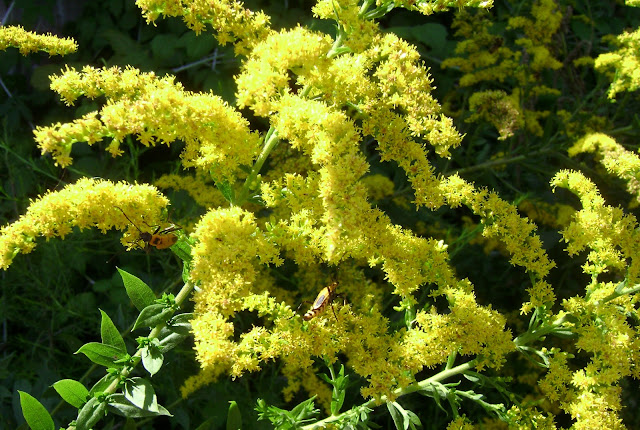 The natives called up other friends to enjoy the refreshments, too, though the past few rainy days have kept many of them away. 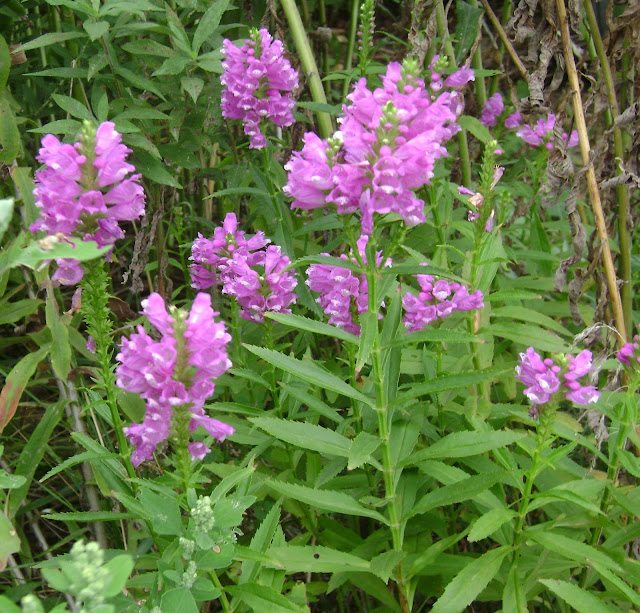 Obedient plant is not to everyone's taste, especially with its tendency to spread rapidly.  But it's hard not to admire these perky pink blooms.    Gail, the enthusiastic hostess of Wildflower Wednesday, calls all these robust plants "rough and tumble" or aggressive self-seeders, but definitely not invasive. I agree.  All three of these are located in my butterfly garden along with other strong survivors like purple coneflower, false sunflower, Joe Pye weed, Phlox pilosa,  rudbeckia, and others.  The garden is located at the back of the property, hiding some unsightly fuel tanks, so the more they spread, the better.  This area is also far enough away from other garden areas, so that they haven't encroached into areas where they wouldn't be so welcome--at least not yet. 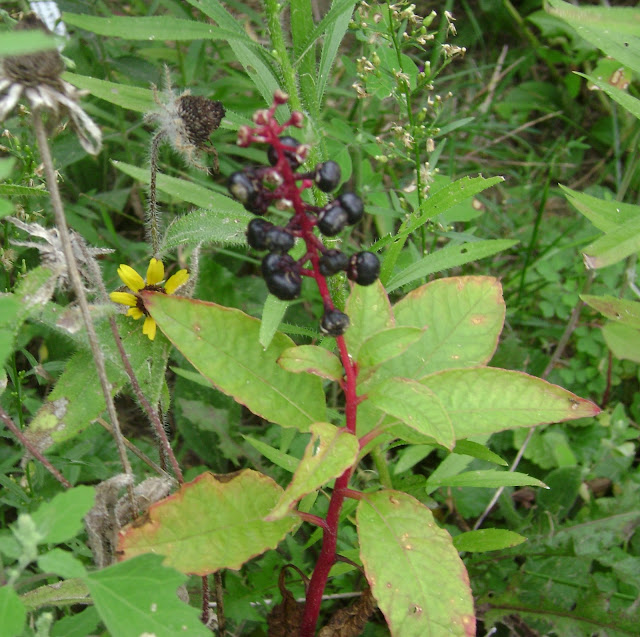 I admit to being rather lazy lax this year in supervising this garden area, so things have gotten a little out of control.  But a little chaos in one's life can be a good thing sometimes so that one doesn't get in a rut or become too complacent.  And surprises like this volunteer pokeberry seedling that appeared out of nowhere this fall can be an unexpected delight. 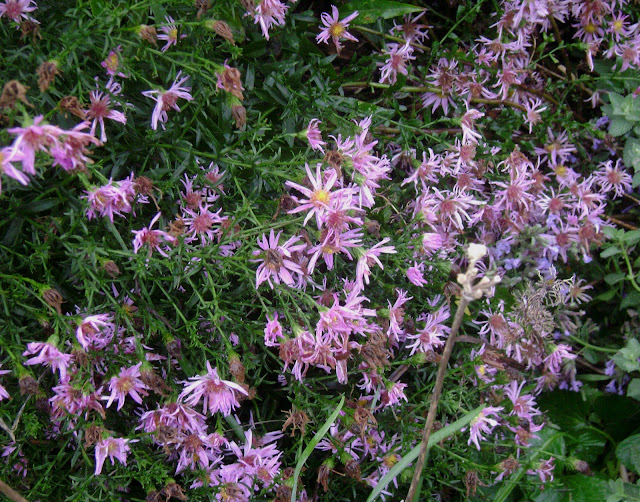 But if you don't have the room for prolific natives like these, there are always tamer hybrid choices.    Though this NOID aster in the sidewalk garden is a bit windswept and disheveled from the rain here, it has been very well-behaved. 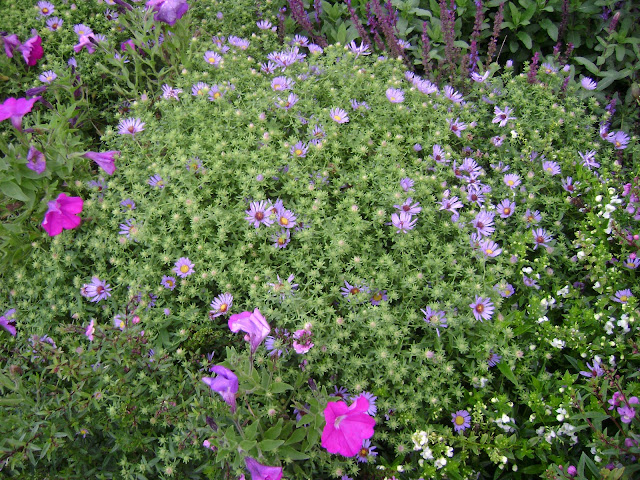 A new addition in the new arbor bed this year, 'October Skies' aster is living up to its name. They are just coming into bloom, providing some much-needed color for the coming month.  The three plants have a nice mounding habit, perfect in front of taller blooms and visible behind a border of annuals. 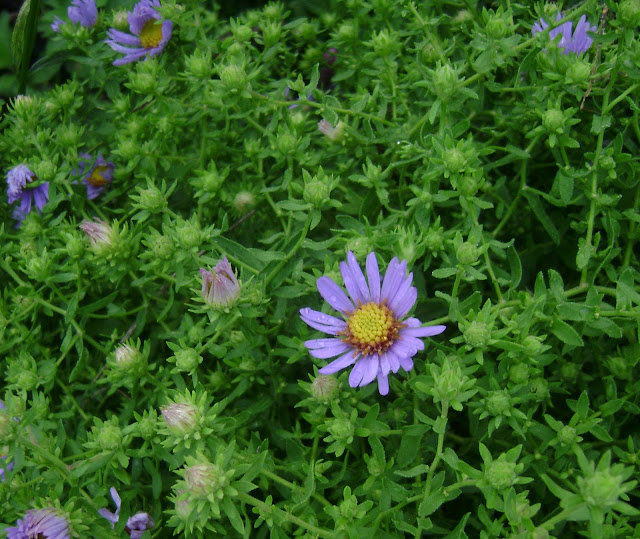 I purchased these this spring after admiring them last year on several blogs.  I was hoping the blooms would be a true blue, but their lavender color is still appealing. 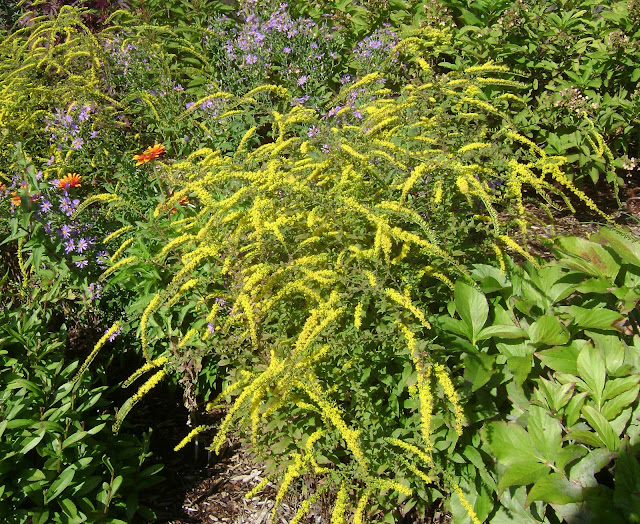 My native goldenrod is often considered a weed by many.  But again, there are better-behaved hybrids to choose from.  I forgot to check the tag on this one,  which is planted in the county nursing home garden where I volunteer occasionally. 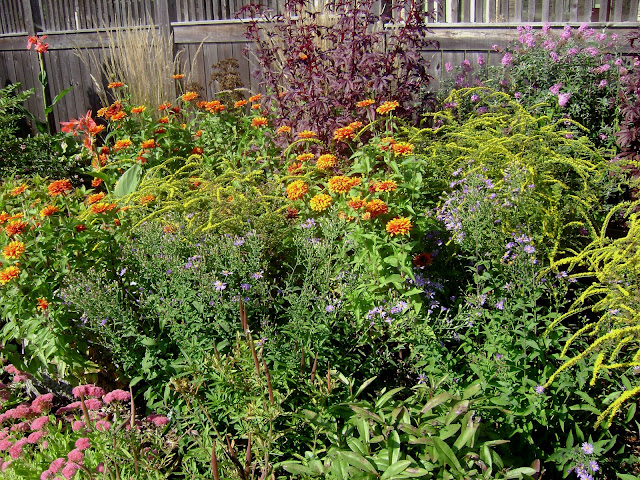 But as you can see, it plays nicely with others. There wasn't much work to be done in this garden on Monday, so the few of us there had time to enjoy the dazzling fall display.
Whether you prefer your parties to be wild and spontaneous or more subdued and organized, fall is a great time to celebrate.  Why not hop over to Gail's to join in the fun of Wildflower Wednesday.
Posted by Rose at 10:50 AM