September has been a month of extreme mood swings so far, with temperatures fluctuating all over the place, including a few days in the high '90's to a forecast for the low 30's the next few nights.  Instead of worrying about watering, I may need to dig out the blankets and cover up my tomatoes and annuals instead!  But fall is definitely in the air, and there are visible signs in the garden. 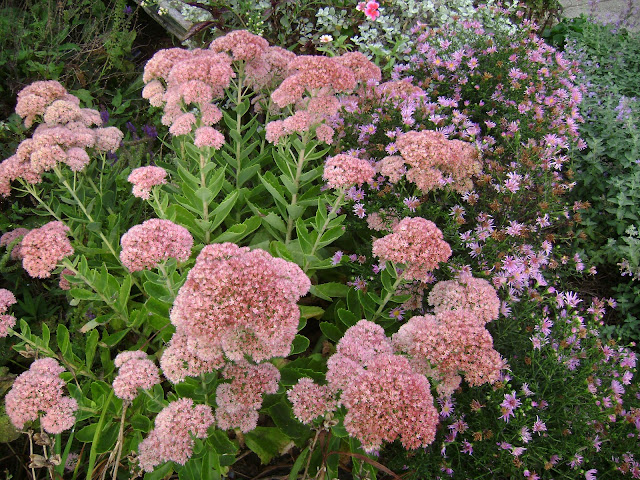 Sedum is putting on its fall wardrobe, and the asters are beginning to bloom.  As I was going through my photos for today's post, I was surprised to see from a similar picture I took last week how much the sedum has changed in such a short time.  Last week this 'Autumn Joy' was just a pale pink, while today it sports a much rosier hue. 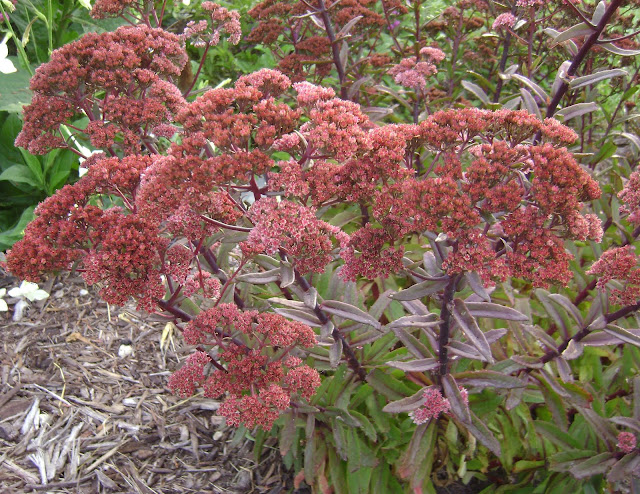 In the Arbor Bed another sedum looks even more like fall.  This new sedum was a passalong from my aunt who said it was also an 'Autumn Joy.'  But it must be some other cultivar because its stems are burgundy, and its florets are also more of a burgundy, much darker than they appear here.  Whatever cultivar it is, I do like it, especially since it has a sturdy upright habit, unlike some of my 'Autumn Joys.' 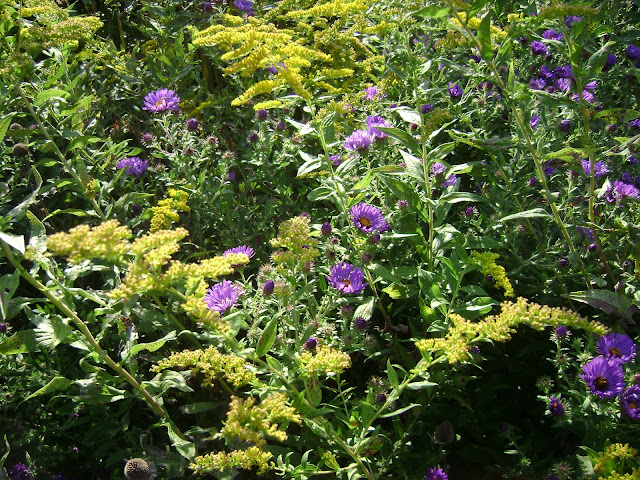 Most of the true fall bloomers are in the butterfly garden where self-seeders goldenrod and native asters have really taken hold.  And to think, just two years ago there was only one aster here and no goldenrod.  These two are almost as prolific as rabbits! 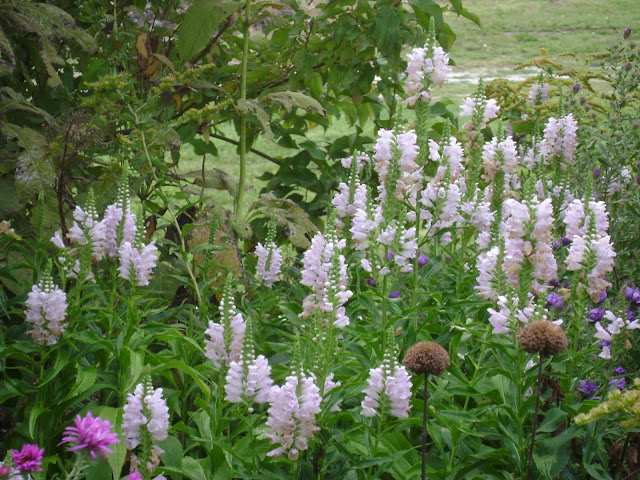 Two years ago there was also only one Obedient Plant, and that one never bloomed.  Anyone wanting to establish a native garden in a hurry could plant these three species and cover a lot of garden in no time. 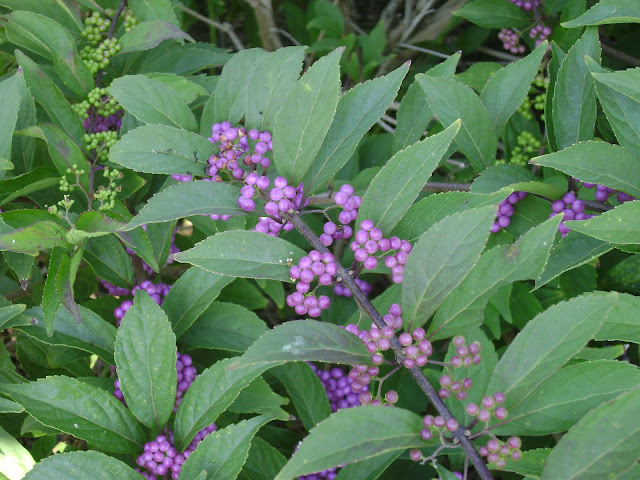 A new favorite in the Arbor Bed this year is the Beautyberry.  I planted several new shrubs this year, and of all of them, the Beautyberry has done the best.  I've admired this plant on other blogs for several years, and I'm happy to finally have my own purple berries this fall. 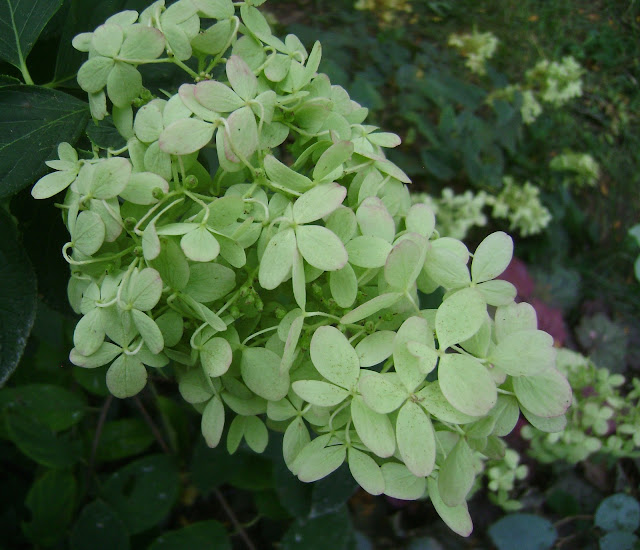 'Limelight' is still going strong in the shade garden; its flowers are now taking on a subtle pink tinge. 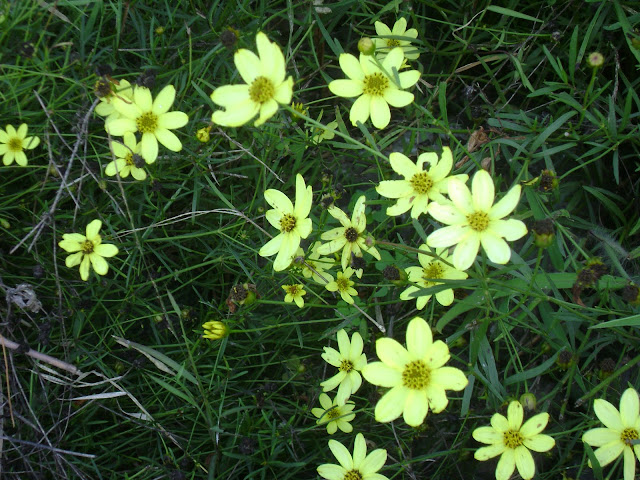 Coreopsis 'Moonbeam' is putting on a new flush of blooms after taking a rest for the past month. 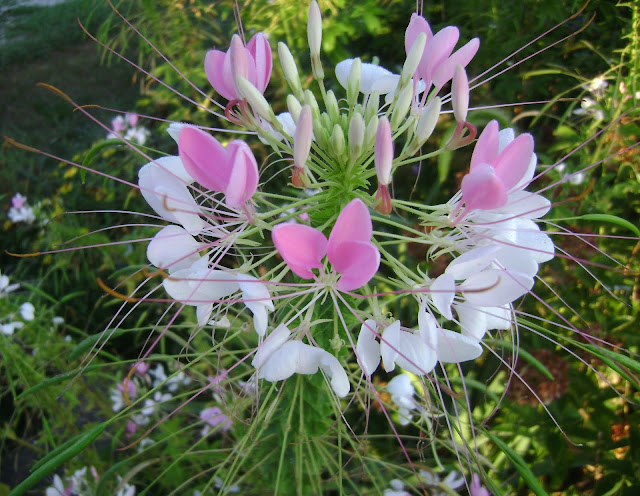 Nearby, the volunteer cleome have been blooming for over a month
and show no signs of giving up anytime soon. 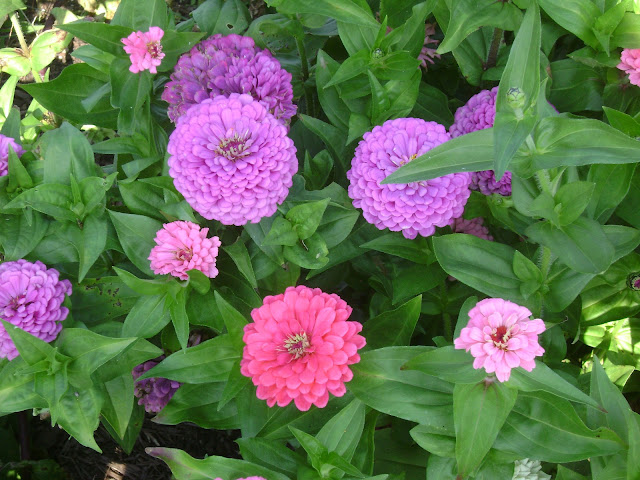 In fact, if it weren't for the annuals, I wouldn't have had many blooms the past few weeks. From Angelonia to Zinnias, the many different annuals have provided lots of color during the transitional time from the summer garden to the fall garden.  I'm beginning to think my procrastination in planting seeds this summer actually turned out to be a good idea.  These are 'Cool Crayon Colors' zinnias from Renee's Garden. 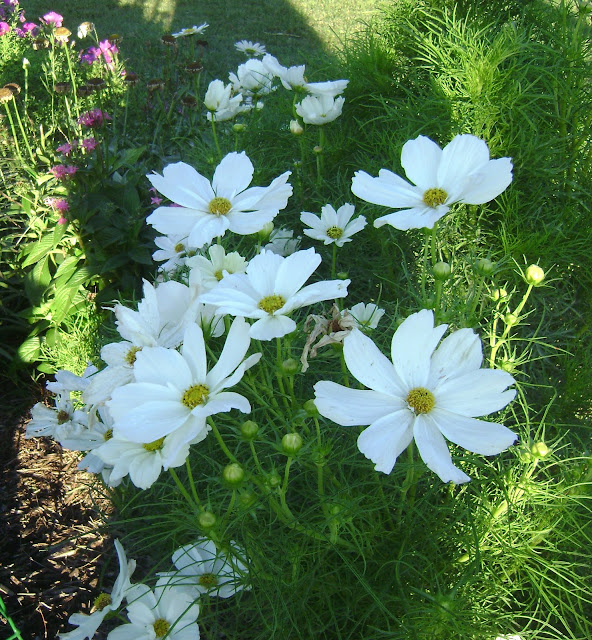 'Snow Sonata' cosmos are a shorter variety than most cosmos, and not as prone to flop over.  Also from seeds from Renee's Garden, they have just started to bloom. 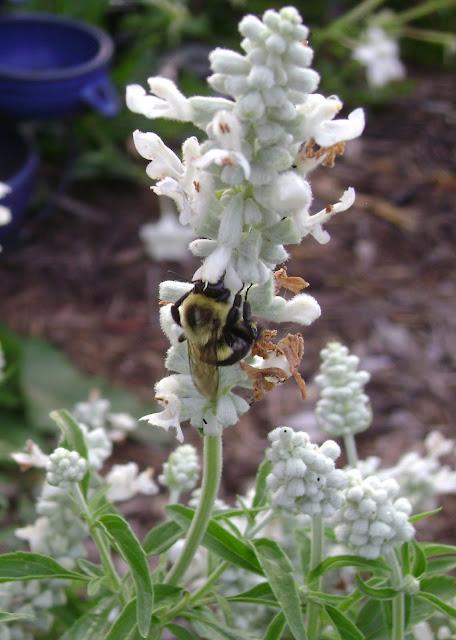 'Victoria Blue' salvia has always been a favorite of mine for late color in the garden.  This year I added some 'Victoria White' in the Arbor Bed as well, and it's performed just as well.  Bumblebees and other pollinators seem to find it just as appealing as the native plants in the garden. 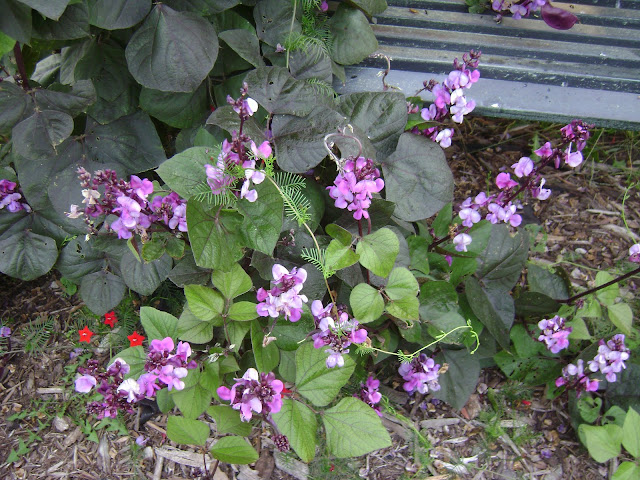 But the annual that has out-performed all the others this year, at least when it comes to size, has been the Hyacinth Bean vine.  I'll have to talk about this plant in more detail in a later post, but let's just say that a few seeds are more than enough to cover a trellis:) 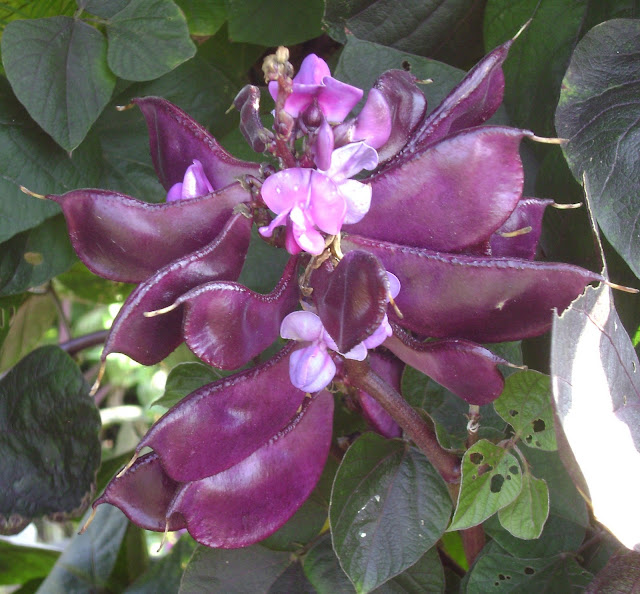 The hummingbirds have loved this plant, though, and now besides the pretty purple blossoms, we have these cool purple bean pods.
What is blooming in your garden today?  Join garden bloggers from all over the world in celebrating Garden Bloggers' Bloom Day, hosted each month by gardening guru Carol at May Dreams Gardens.
Posted by Rose at 5:00 AM