It's been a wild and crazy week and a half here, preparing for a big event next weekend.  There's been a frenzy of planting, weeding, and trimming, trying to beat the rains forecast for 5 days . . . rain that never came, meaning the garden hoses had to be lugged around each day as well, before the newly planted annuals drooped hopelessly in the hot sun.  Today the dark skies are really threatening and the wind is blowing at full force, so I must hurry in order to participate in the monthly celebration of Wildflower Wednesday hosted by the champion of pollinators, Gail at Clay and Limestone.

A quick look at some of the natives and native relatives finally appearing here in the garden: 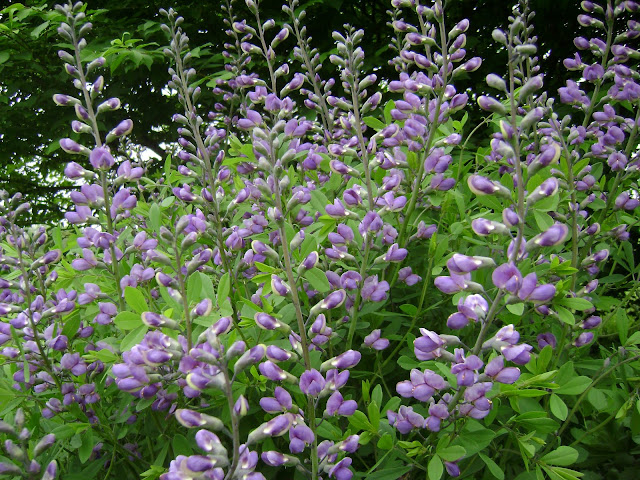 Ever since I first saw drifts of Baptisia austalis, or Blue Wild Indigo, during the Chicago Spring Fling in '09, I knew I had to have this plant in my own garden.  According to Illinois Wildflowers, it is not a common native in this part of Illinois and not usually found in the wild.  But its popularity has grown, and certainly after being named the Perennial Plant of the Year in 2010, it can be found in many Illinois gardens. 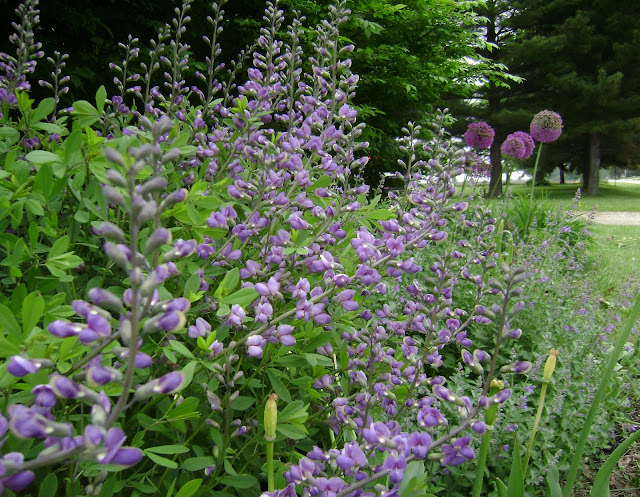 An awkward long shot of the Baptisia in my roadside garden shows you just how large it has become in two years, when comparing it to the giant alliums to its right.  Whenever I look at these blooms in the spring, I'm always reminded of the magic of the Lurie Gardens in May. 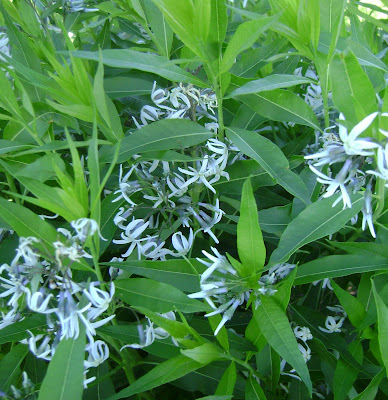 Another native first seen at the Lurie two years ago and one of my new favorites is Amsonia Tabernaemontana, or Bluestar.  It has been blooming for a good two weeks in my garden, though it is just beginning to fade.   Its relative, Amsonia hubrichtii, has been named the Perennial Plant of the Year for 2011, but Amsonia T. is the only native bluestar in Illinois.  According to Illinois Wildflowers again, it is attractive to ruby-throated hummingbirds and to various long-tongued insects.  The foliage, however, contains a white latex that is toxic to mammals--in other words, this is the perfect plant for those bothered by deer. 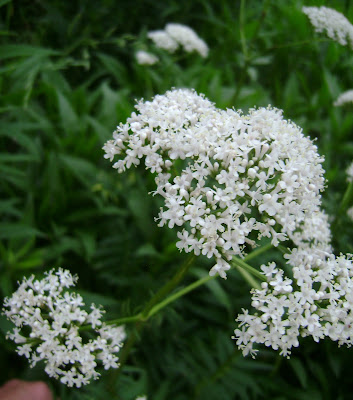 Although not technically a native, Garden Valerian, Valeriana officinalis, is included on the Illinois Wildflowers website, so I thought I would include it today.  This plant is often included in herb gardens for its
medicinal effects.  Deer are also not fond of valerian, but it is attractive to a host of bees and butterflies. 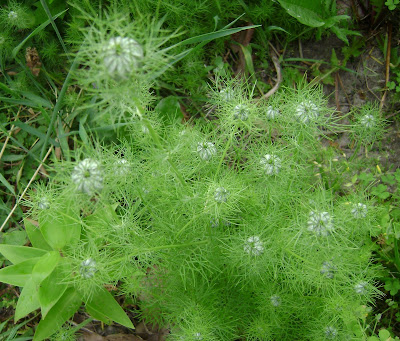 The butterfly garden is in a state of chaos right now, as I tend to other more visible parts of the garden first.  Part of my problem in weeding out the undesirables and thinning the prolific self-seeders here is knowing which are which.  But there is no mistaking these seedlings about to bloom--Nigella, also known as Love-in-a-Mist.  These are not natives at all--in fact, my original seeds came all the way from the UK from blogging friend Cheryl--but I thought it was interesting that Illinois Wildflowers includes it in its list of "weedy wildflowers."  Apparently, it has escaped cultivation here and can occasionally be found in the wild here in the Midwest. 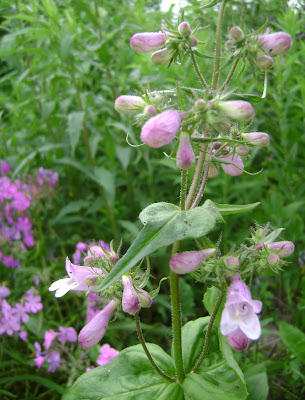 However, one of the plants that I didn't recognize as it began to grow in the butterfly garden and nearly pulled out was this one.  I'm so glad I didn't, because when it began to bloom, I recognized it as Penstemon X, a gift from our wildflower hostess Gail.  As evidenced on Gail's posts, this plant is a bee magnet. 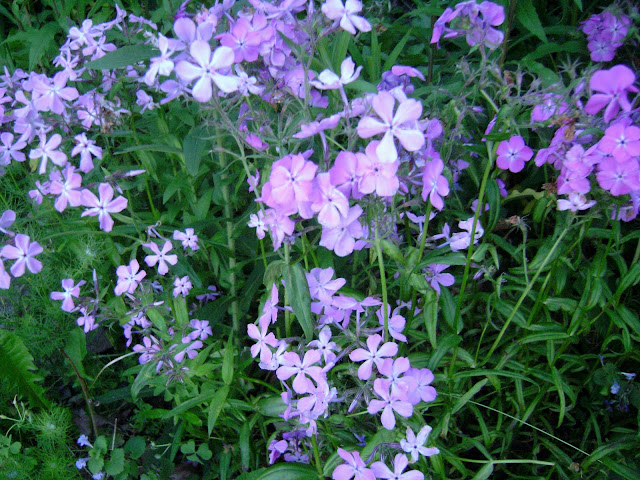 Another gift from Gail is Phlox pilosa, now commonly referred to as PPPP.  Gail has been very generous with providing starts for so many friends that this surely must be one of the most celebrated plants in all of the blogosphere! I thought this description of PPPP from Illinois Wildflowers was interesting:

"The flower structure of the Phlox genus is a classical example of a butterfly flower. Such flowers feature flared petals that function as a landing pad for these insects, and a long narrow tube that is accessible to the long proboscis of butterflies, as well as skippers and moths."

Also interesting is that there is a very rare species of this phlox, Phlox pilosa var. sangamonensis (Sangamon Phlox), found in our county and one nearby county--I'll have to be on the lookout for this. For more information, check out one of Gail's many posts on this lovely native. 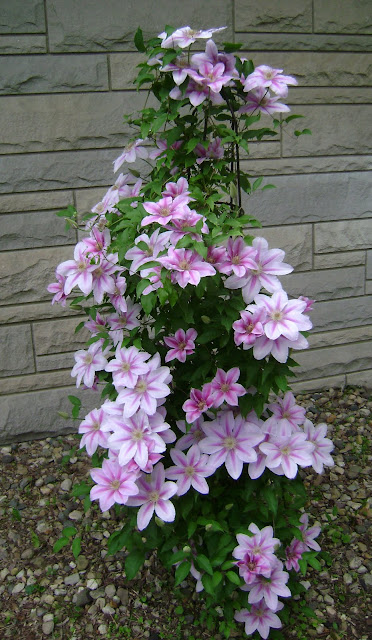 There are many other natives waiting in the wings for their appearance in June and July, but before you go, I can't resist showing one non-native that is looking its best right now--my clematis 'Nelly Moser.'  Even my non-gardening son and daughter-in-law commented on all the blooms this week.  I think I should hint that a taller obelisk would make a good birthday present this year, don't you think?


Every month I learn something new about natives and wildflowers from reading other posts--why not check out some of these participants?  You'll find them listed by Gail at Clay and Limestone.

Just a note--for some reason I can't leave comments on certain blogs.  So if I haven't visited lately, I'm not ignoring you . . . I'll keep trying.
Posted by Rose at 8:58 AM