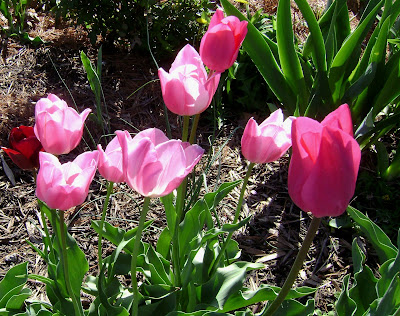 While the rest of the world has been immersed in the royal wedding, I have been more interested in a wedding coming up soon--my daughter's.   Between last minute details and packing for the beach ceremony,  I haven't had much time for gardening or blogging.  I will be offline for a short while, but before I leave, I wanted to share some of my favorite blooms from this spring's garden. 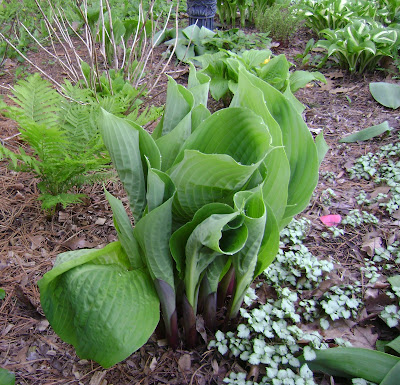 Everything changes so quickly this time of year, that I'm sure the garden won't look the same when I come back.  The tightly coiled leaves of the 'Sum and Substance' hosta are starting to unfurl already. 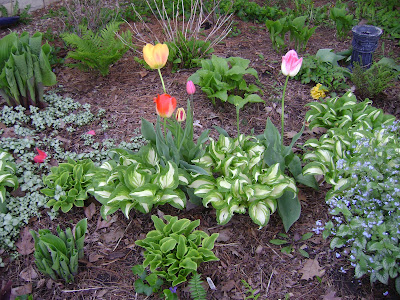 Other smaller hostas in the shade garden are already spreading out after a few weeks of seasonable temperatures and a lot of rain. 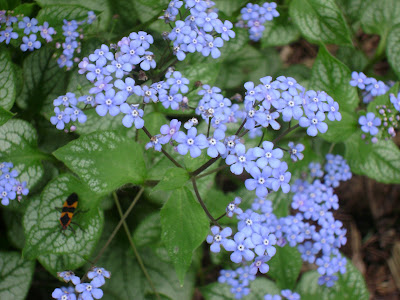 Besides the spring bulbs, the Brunnera 'Jack Frost' is one of my favorites in the shade garden.  I can't get enough of these blue, blue blooms.  The beetle on the foliage was a surprise when I downloaded this picture.  I've seen a few bees and saw the first butterfly today; in another week or two they should be more plentiful. 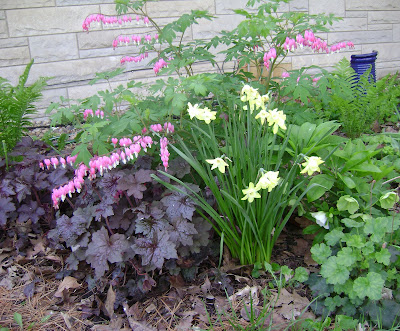 The slender narcissus, which someone (sorry, I forgot who!) suggested might be 'Pippin,' is still blooming, much to my delight.  And the bleeding heart has nearly doubled in size and number of blooms since last year. 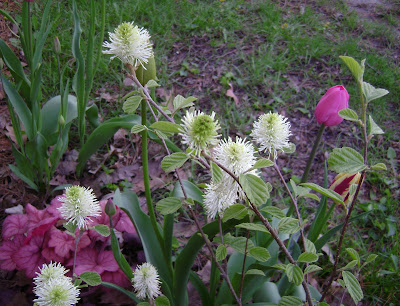 This is the first year for the new fothergilla 'Blue Shadow.'  I planted it for its fall color, but these white puffball blooms are just as welcome this spring.

There are wildflowers called spring ephemerals, but so much of spring's beauty is ephemeral. 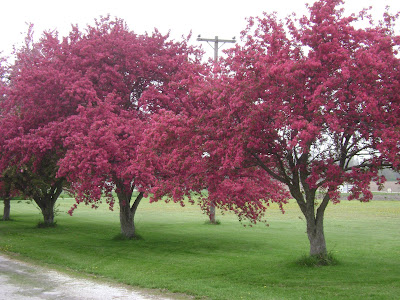 The flowering crabapples were gorgeous this year, but with heavy rains and strong winds at times last week, the blooms didn't last long, and soon the driveway was strewn with pink petals.  I won't complain, though; here in central Illinois we were very fortunate compared to other areas of the country, especially the South, who experienced so much destruction from the storms. 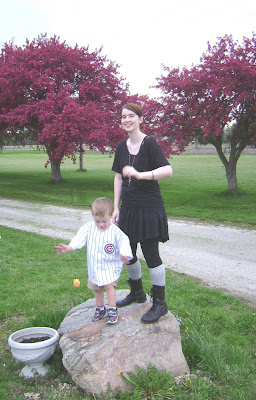 The crabapples were at their best over Easter weekend, but I didn't take time to get a good photo then.  I guess I was distracted by other priorities. 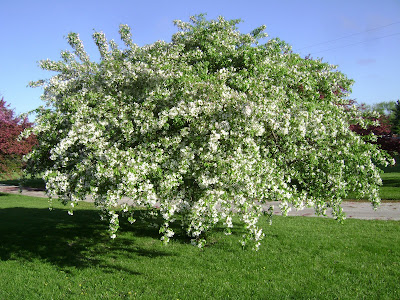 The white crabapple blooms a little later and lasts longer than the other varieties, but I noticed today that even it had lost most of its petals after another blustery day. 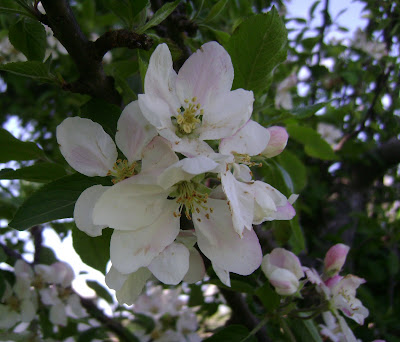 The old apple tree has seen better days, but its spring show is spectacular. 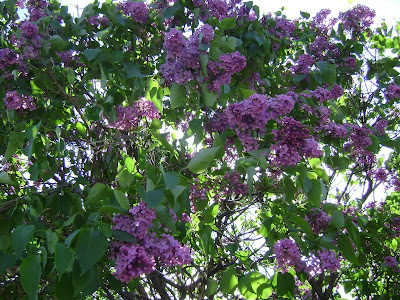 Last summer was the first time I did a serious pruning of the old lilac, and it rewarded me with the most blooms I've ever seen on it.  Pruning will definitely be on my to-do list again in June. 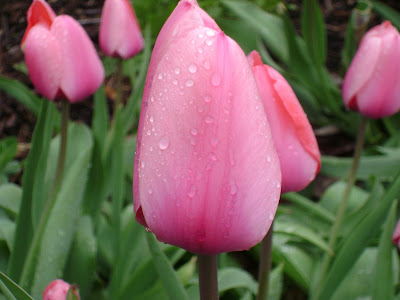 But all this has been leading up to what I promised in my last post--showing off all my tulips.  There was nothing ephemeral about these bulbs this year--one variety or another has been blooming nonstop for at least three weeks, and I have been loving every minute of it.   Pink is definitely the predominant color. 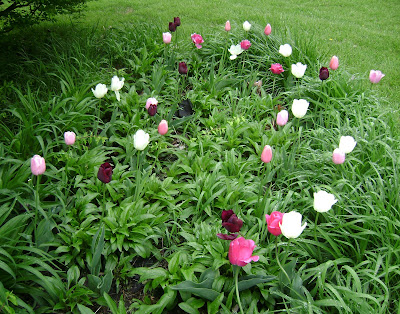 In the roadside garden a collection of tulips from Breck's called 'Monet's Garden' compete with the rapidly growing coneflowers and daylilies. 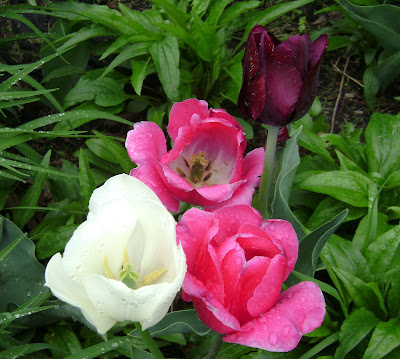 The collection is intended to echo a common color scheme of Monet
with shades of pink, white, and dark purple. 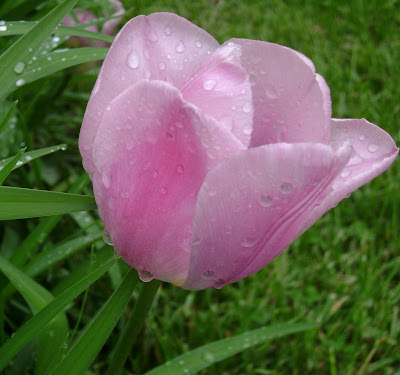 This pale pink one didn't fit in the previous photo.  Did I mention I like pink?:) Somehow a few red tulips also snuck in another area of the roadside garden.  This may be from a previous year's planting (most likely) or from a bargain collection I purchased somewhere last fall and neglected to write down in my garden journal. 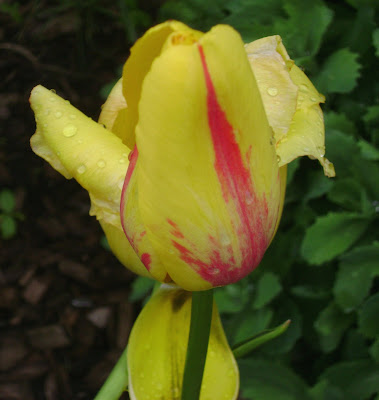 Another unnamed tulip in the roadside garden, this time yellow with streaks of red. 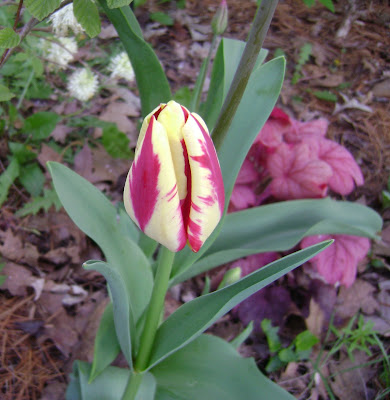 Near the shade garden a different bi-color tulip which also appeared in the lily garden.  Part of the fun of seeing the tulips bloom each spring is the surprise factor- a late fall rush to find a place to plant them all often means I forget what I've planted and where. 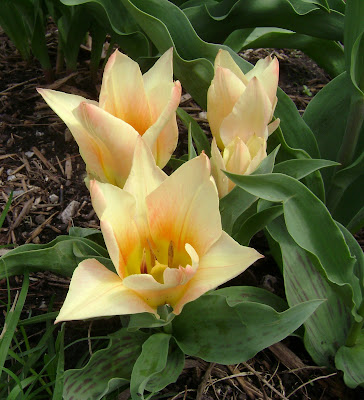 But I didn't forget two new purchases last fall from Brent and Becky's bulbs.  I couldn't resist buying something named 'Fur Elise,' but I had forgotten that it was a shorter tulip than most of my others. 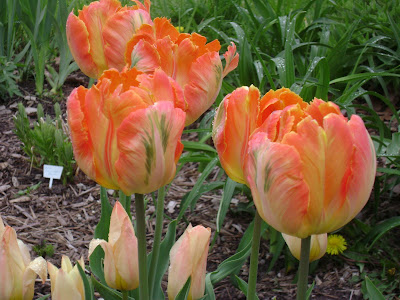 The other new tulip I've shown before is 'Professor Rontgen,' a  parrot tulip that is every bit as gorgeous in person as it appears in their catalog. 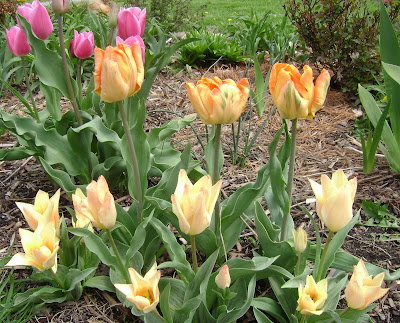 And the shorter 'Fur Elise' worked out perfectly as the forefront for these taller showstoppers.

Although I tried and tried, I couldn't get a decent long shot of the whole lily garden.  But from this photo you can see that there is no color scheme in this garden--it's been a kaleidoscope of clashing colors all spring. From creamy white to nearly black, nearly every color of the rainbow is represented by this year's tulips. 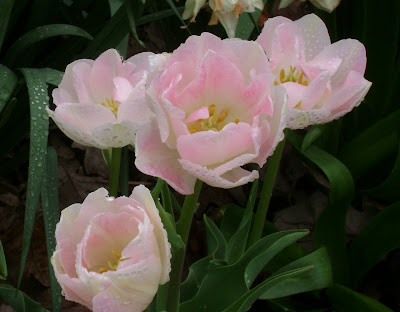 No tulip post is complete for me without my favorite tulip, the last to bloom of all--sweet 'Angelique.' 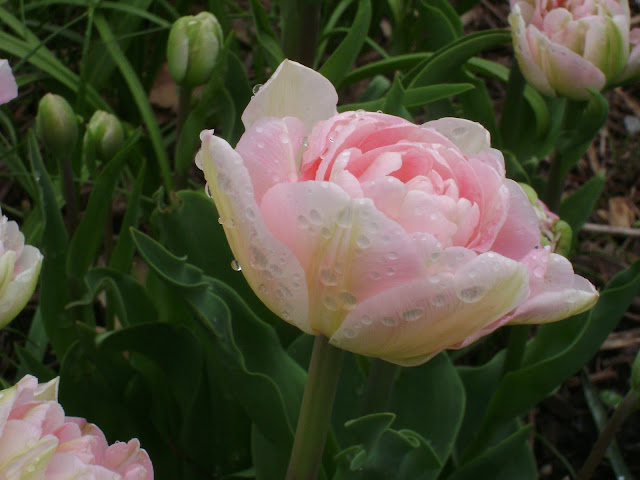 Enjoy the beauties of spring while they last, and Happy Gardening!
Posted by Rose at 5:00 AM