Once again it's time for Wildflower Wednesday, a meme created and hosted by the champion of native plants, Gail at Clay and Limestone.  Unless I dip into the archives this winter, this may be the last WW post for me for awhile as the temperature is supposed to dip below freezing the next few nights, meaning an end to any wildflowers locally until spring. 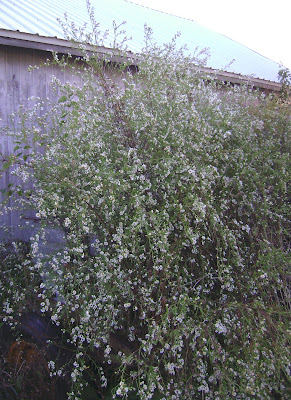 What better way to end the wildflower season then but with the appropriately named Frost Aster.  My last Wildflower post featured pokeberry, but I also included a photo of an unidentified tall aster growing next to the pokeberry.  Mr. McGregor's Daughter suggested it might be a Hairy Aster.  Now I have a hard time telling one aster from another, but after looking at the plant more carefully and researching it in my two favorite sources,  I am 99% sure that this is what I have growing in many places around the farm. 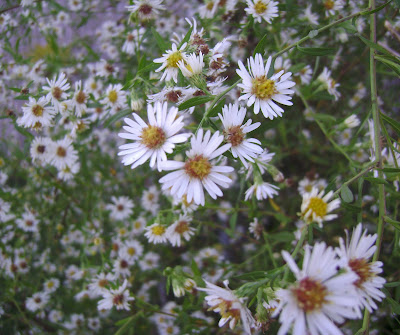 Aster pilosus is a widely branched, spreading aster with tiny white flowers about 1/2" wide.  The flowers have 15-30 ray florets and a central yellow disk, distinguishing it from other types of asters.  Another distinguishing feature are the tiny white hairs on the stems, which is no doubt where it gets its name.  In Illinois Wildflowers, author Don Kurz calls this a "Hairy Aster," but the website Illinois Wildflowers calls this a "Frost Aster."   Frankly, I think "Frost Aster" sounds much more appealing, don't you? 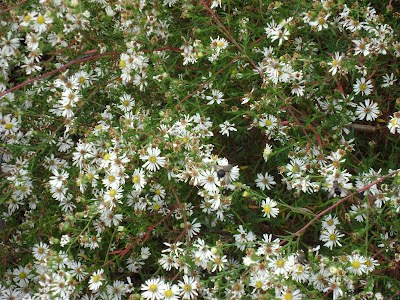 Deer sometimes eat the leaves, stems, and flowerheads of this plant, while songbirds enjoy the seeds.  But it is most attractive to insects, particularly most species of bees as well as to some butterflies.  The caterpillars of various butterflies and moths, including the Pearl Crescent, feed on the foliage.  Because the Frost Aster is one of the last plants to remain in bloom before a heavy frost, it is an important source of nectar for many of these insects.  Yesterday the blooms were full of bumblebees and other types of bees, though the photo above was the only one I managed to get in focus, and unfortunately, all you can see of a bee is a black spot in the middle of it. 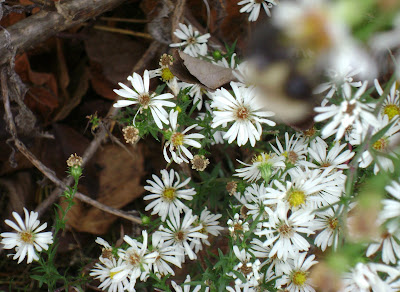 Aster pilosus is common throughout the state of Illinois and is not fussy about soil, thriving just about anywhere.  Both sources say it will grow up to 3 feet tall, but a few of my plants are twice that height.  I thought this quote from the website was interesting:

"This plant can be quite attractive because it is often covered with small white flowers during the fall, helping to extend the season of bloom in wildflower gardens and elsewhere. People often pull it out of their flowerbeds without realizing what it is, and instead attempt to grow exotic flowers that wither away into nothing under the hot Midwestern sun, unless they receive constant water, fertilizer, and attention. The Frost Aster, on the other hand, flourishes without any special treatment." 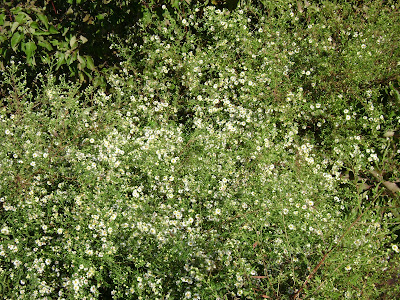 This is not a plant for everyone, however, especially if you don't have a large garden area.  Yes, it's a pretty plant in the fall with its frothy white blooms, but until fall quite frankly it looks like a weed.  All summer long I  looked at the area above and wondered what was growing here.  I debated about cutting this all down, sure they were weeds, but I didn't want to disturb the goldenrod that usually blooms here, too, and well, it was in the back out of sight and there was so much else to do in the garden that I let it go.  Next year I might be a little more ambitious and cut this all down, but considering it's a prolific self-seeder, I'm sure there will still be some Frost Asters hiding out in the back, keeping the bees happy until winter arrives.
To learn about other wildflowers, be sure to visit Gail today, and why not join us for Wildflower Wednesday?
Posted by Rose at 5:00 AM