All across the country right now baseball fans are cheering on their teams, hoping they reach that pinnacle of the All-American pastime--the World Series.  Inspired by another Rose, and fellow baseball fan, I thought this would be a good time to give out post-season awards.  However, since neither Rose, a Chicago White Sox fan, nor I, a fan of those not-so-lovable losers the Chicago Cubs, have a team to cheer on in the post-season, we are turning our attention to our gardens instead for candidates worthy of being named MVP. 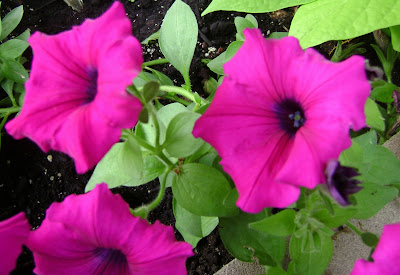 First let's look at one disappointing candidate who was not even considered for an award.  These 'Royal Magenta' supertunias performed beautifully last year, spreading through the porch planter and trailing down its sides, just as I wanted them to.  Because of their coachability last year, I gave them a starting position once again this year.  But although their early season batting average was high, they went into a late-season slump and eventually had to be cut from the team. 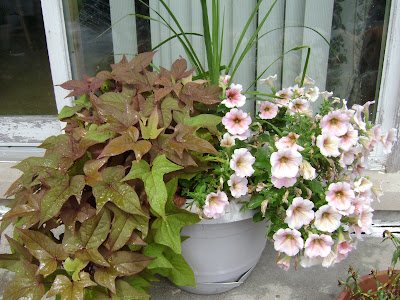 Other Supertunias were equally disappointing over the long haul.  These 'Creme Brulee' looked good through the heart of the season, but totally disappeared by September and had to be sent back to the minors, replaced by those September dependables, pansies and violas.  And we won't even talk about the calibrachoas!   Their batting slump started much earlier in the season, prompting the owner to question the wisdom of spending the money to acquire them in the first place.  However, unlike the disloyal management of the Cubs who traded two of my favorite players, Ryan Theriot and Derrek Lee before the end of the season (I'm still mad at them for this!),  I'm going to chalk up their poor performance to a difficult season and give both the Supertunias and calibrachoas a chance at starting again next year.


This season was a difficult one for my garden team this year.  Many players folded from the heat and lack of constant rehydration.  But there were three that seemed unfazed by the less than ideal field conditions. 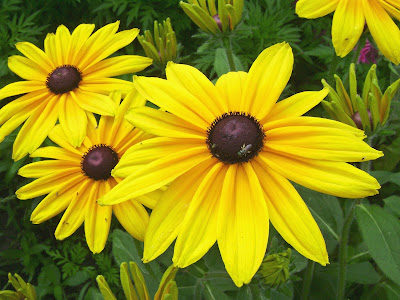 First off, the Golden Glove (for fielding percentage for those of you who are non-baseball fans) award goes to the Susans.  Last year I planted two, maybe three, of my very first Rudbeckias--one or two 'Goldsturms' and one Rudbeckia hirta.  This year there were too many to count, and I have no idea which plant is which.

Perhaps they also deserve the Silver Slugger award for batting percentage, since they had to slug it out with all the other volunteers for space on the field.  But the Susans didn't seem to mind, finding space where they could, and cooperating well with all their teammates. 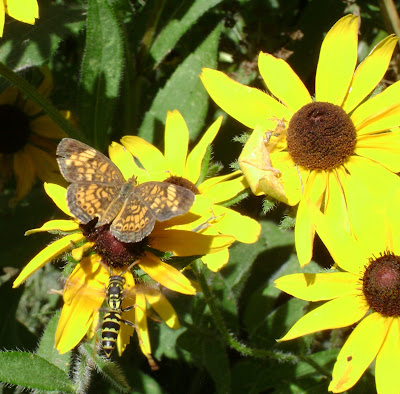 Always eager to please, it's hard to miss their cheery faces, especially when the sun intensifies their golden glow.  They were chosen for the fielding award, since they were so talented at catching flies . . . and bees . . . and butterflies.  (Okay, so maybe this analogy is getting a little old . . .)
You might have been surprised that I didn't choose my signature flower, the Purple Coneflower, Echinacea Purpurea, for some type of award.  True, it achieved its usual superstar status this summer and is surely destined for the Hall of Fame, but I decided to look at season-long performance rather than just a one or two-month blaze of glory.  Though the Susans have mostly turned to seed like the coneflowers, there are quite a few of them still blooming and keeping their field positions.
The last two awards also go to consistent season-long performers: 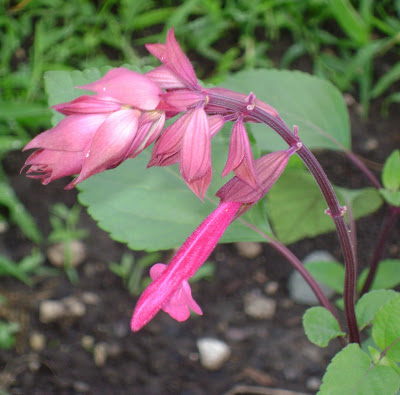 Rookie of the Year has to go to the Salvia, 'Wendy's Wish.'  I was looking for another 'Black and Blue,' which did so-so in my garden last year, when I spied the hot pink blooms of this new salvia.  Little did I know when I bought this plant what a superstar it would become. 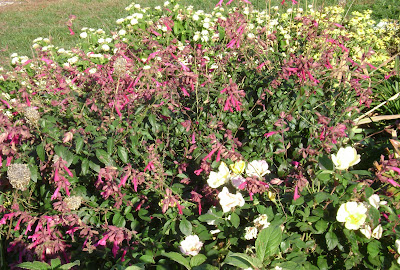 Trying to capture the appearance of the whole plant defies my camera and my photographic abilities.  A photograph on a bubblegum trading card just can't do it justice; this is one player you have to see in person to appreciate. 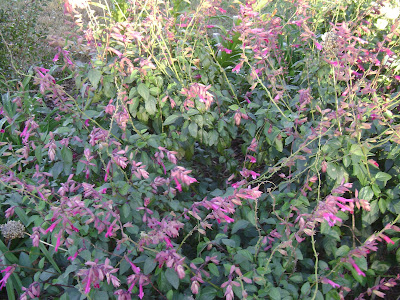 Nope, not much better.  You'll just have to take my word that it has bloomed non-stop all summer and, purely by accident, became the focal point of the lily bed once the lilies stopped blooming.  Add to its impressive stats that it is also a hummingbird magnet.  Several times as I was weeding or watering this flowerbed, a hummingbird would come to sip nectar from its blooms. 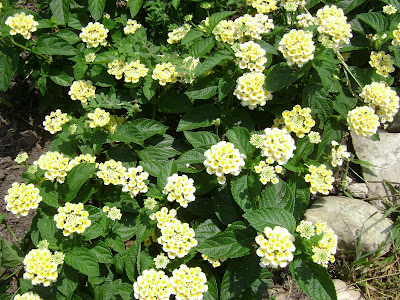 And now the most coveted award of the season--the MVP--goes to 'Lucky Lemon Creme' lantana!  For many years different varieties of lantana have been used in containers, but this was the first time I planted it in the ground.  It soon became obvious to me that it loves the outfield much better than being a designated hitter. 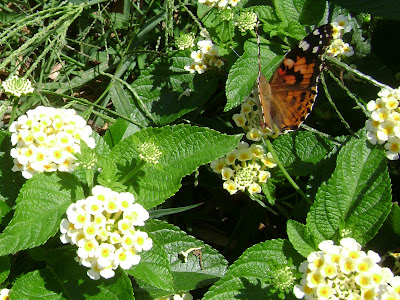 Never before did I realize what a butterfly magnet this plant is.  It was a great season for butterflies, and every one that visited my garden made time for a refreshment stop at the lantana. From the Red Admirals Painted Ladies (thanks, Shy Songbird!) . . . 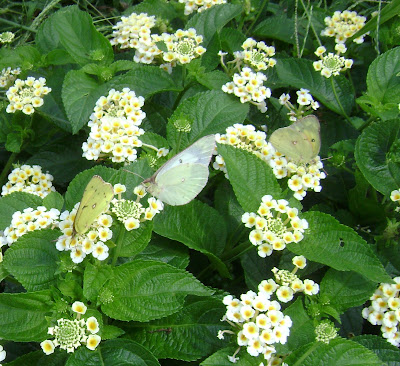 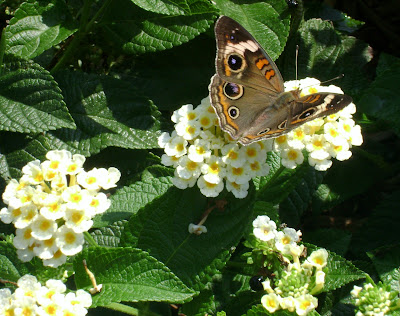 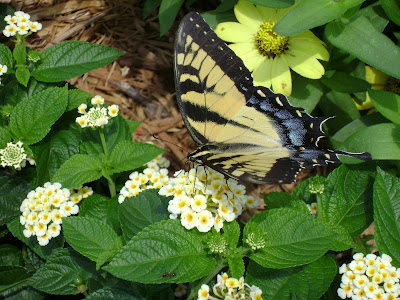 . . . to the Tiger Swallowtails, as well as many other types, the lantana was a favorite, often covered in a fluttering of wings.  This butterfly magnetism was a quality exhibited by several other plants in the garden, but what really vaulted the lantana into first place for MVP were its other statistics:  blooming non-stop all summer, no need to deadhead, drought tolerance, and exceptional growth.  To be fair, it may have had an advantage over other annuals and perennials this year because of field conditions-- lantana loves heat, and  that was something we had plenty of all summer long.  I might add that other varieties of lantana probably would have performed just as well as 'Lucky Lemon Creme.'  I picked this soft yellow to border the lily bed so that it wouldn't clash with the oranges and reds of the lilies.  But since my color scheme eventually went out the window as usual, next year I might opt for a more colorful lantana. 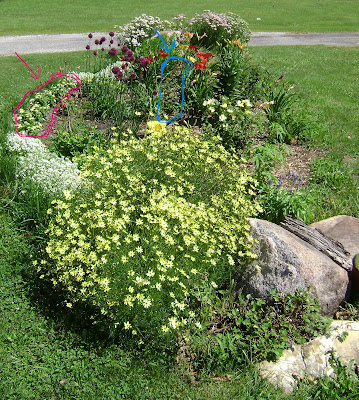 As a final justification for the awards for 'Lucky Lemon Creme' and 'Wendy's Wish,'  just look at these before and after photos.  You'll see in my first attempt at drawing on a photo, a crude red oval showing the location of the lantana in mid-June.  A flat of small lantana seedlings were planted here between two plantings of alyssum.  Next year the border will be all lantana, since the alyssum didn't perform nearly as well.  In the middle you'll notice a blue circle indicating the barely visible 'Wendy's Wish,' which I located only after zooming in and in on this photo. 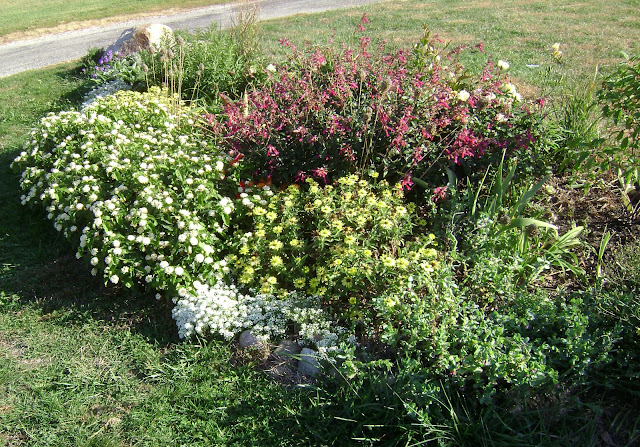 Here is the same bed now--no need for arrows, because both are clearly visible, though the lantana, to the far left, looks white in this sunny photo.  Some cynics might accuse both of these players to have used performance-enhancing drugs to achieve this stature, but I assure you other than a few infrequent applications of fertilizer to the lantana and probably none on the salvia, both 'Lucky' and 'Wendy' are true natural athletes.  Their physical stamina this season edged out all the other competitors.
Since both the lantana and the salvia are annuals, their contracts will have to be renewed next year.  But rest assured, this owner/gardener has been so impressed by their superstar performances this season, that I will do whatever it takes to sign them again next year!
Posted by Rose at 6:00 AM