October is a bittersweet time in the garden.  A glass-half-empty kind of person would say that it's only a matter of time before the first hard frost brings all of this to an end.  A glass-half-full kind of person would breathe in every scent and be thankful for each lovely sight, no matter how transitory.  For today, let us be in that second group. 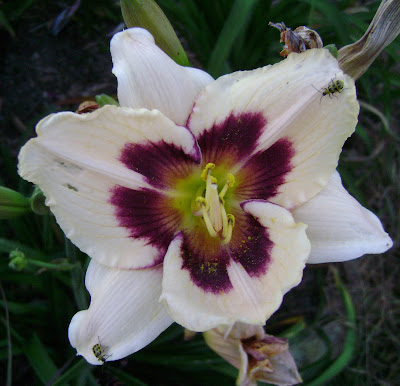 There is certainly enough still to enjoy in the garden.  Surprisingly, there are even some new blooms amidst the dried seedheads and withered stems.  The biggest surprise for me was the new blooms on Hemerocallis 'Moonlight Masquerade.'  This daylily bloomed for the first time this spring, but I had no idea it was a re-bloomer. 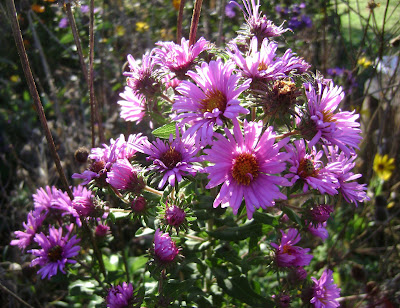 Though even the asters have mostly faded away, this one at the front of the butterfly garden surprised me with its pink, not purple, blooms.  Could this be the Aster tartaricus that Gail gave me last year?  If so, I won't feel quite so bad about all the plants I pulled out this summer, thinking they were weeds. 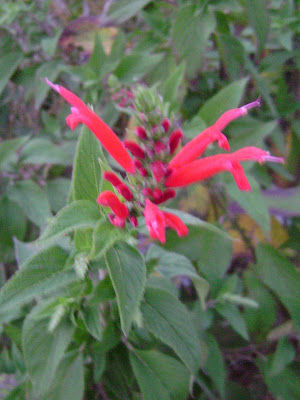 The pineapple sage is finally starting to bloom.  It's a late bloomer anyway, but this seems unusually late. Perhaps it needed the cool weather to finally put out some blooms.  And yes, I know it's blurry, but it's been rather windy here lately. 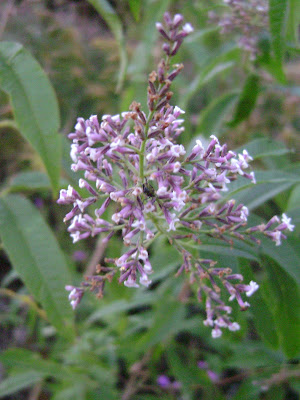 I was also excited to see some blooms for the first time this year on the lemon verbena.  This is an annual here in zone 5, but last year's plant never bloomed even though it grew very tall.  The blooms aren't that showy; the real feature of this plant is its fragrance.  I can't walk by it without plucking a leaf and rubbing it, releasing its fresh lemon scent. 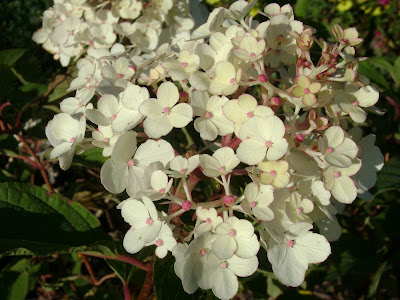 Other new blooms come from a new-to-my-garden plant, a gift from Cheryl.  This 'Strawberry Vanilla' hydrangea is a new hybrid this year, and I was surprised when we found it in our local garden center.  Its delicate white blooms with pink centers are pretty, but I'm anxious to see if next year it will fulfill its promise of white to pink to nearly red blooms, looking like a double dip strawberry-vanilla ice cream cone. 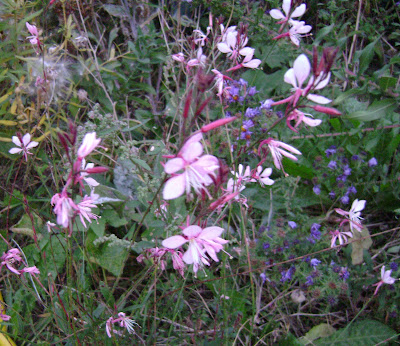 Another new plant was purchased at a clearance sale late in August.  Plopped in the butterfly garden and then promptly forgotten, this gaura apparently has suffered no ill effects from my neglect. 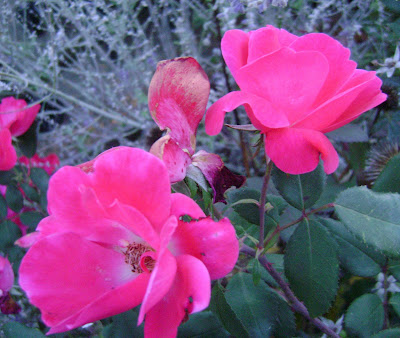 The Knockout roses have also put out a flush of new blooms, enjoying the cooler weather. 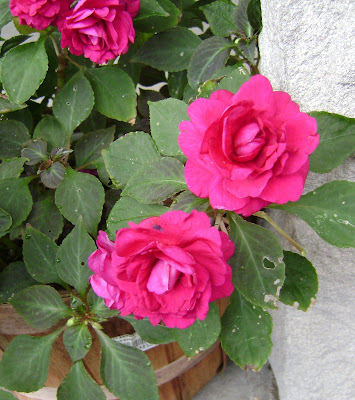 While some annuals succumbed to the heat this summer, many others have been invigorated by fall temperatures.  The double impatiens have done well all year. 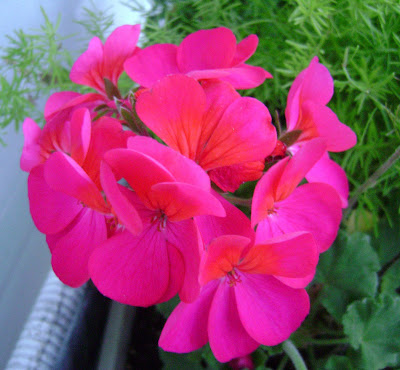 I had forgotten just how neon pink these geraniums in the old fern planter were. 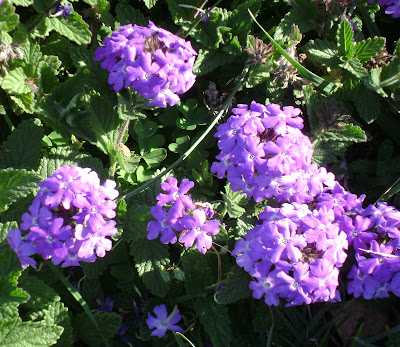 After a near-death experience this summer, the verbena (name forgotten, but it's not 'Homestead' verbena this year) is finally coming into its own. 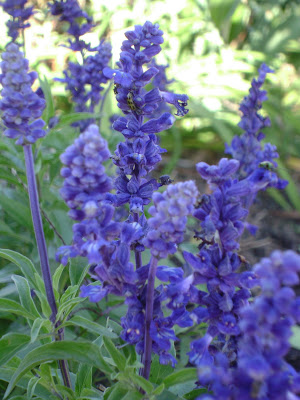 And, of course, you can't beat 'Victoria Blue' salvia for an eye-popping purple accent each fall.  It is one of those annuals that will hang on until the bitter end this season. 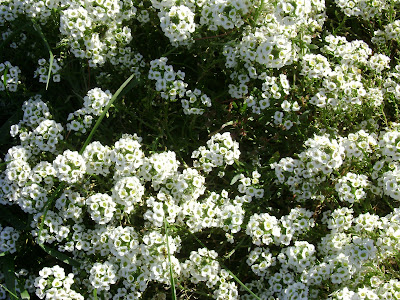 Sweet alyssum, usually overlooked, finally is commanding some attention.  I didn't realize how much it disliked heat; it looked nearly dead most of the summer. 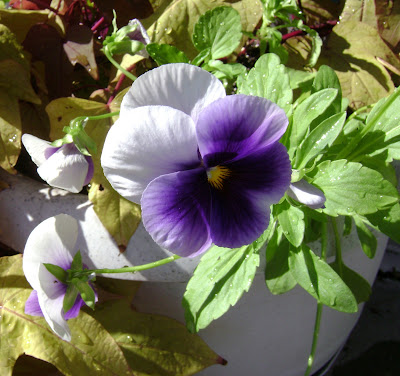 The containers are looking pretty ratty, though.  If I were more ambitious, I'd start cleaning most of them out, but I did replace a few plants--pansies and violas take the place of the now-defunct petunias. 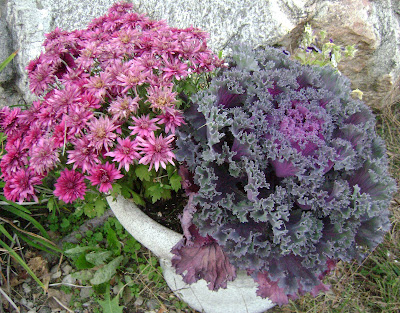 Flowering kale and a cheery mum add some fall color. 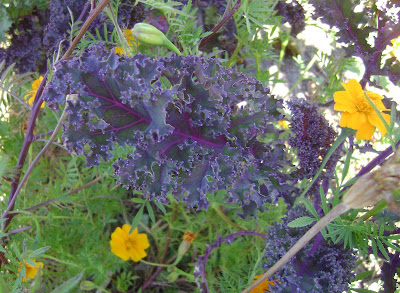 The detritus of the vegetable garden is partially hidden by some fall color as well,
including the purple ruffled kale. 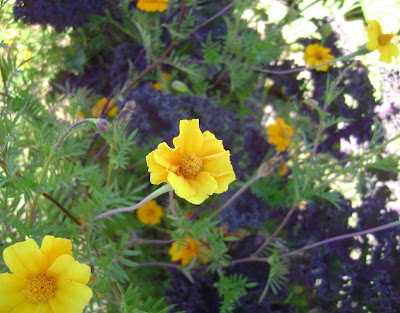 It makes a winning combination paired with yellow marigolds. 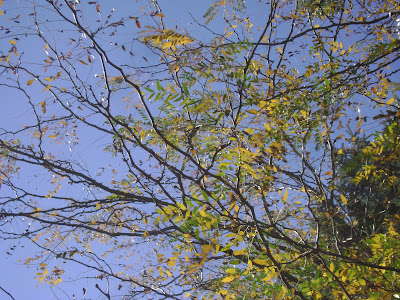 But the real fall color isn't in my garden at all, but all around me. 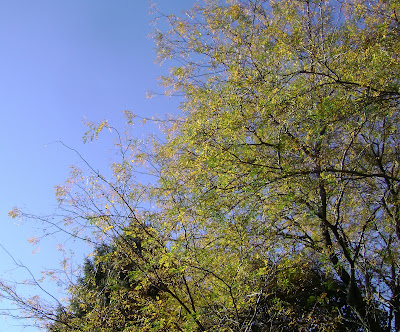 The golds, oranges, and vivid reds of autumn can be seen by looking up, not down. 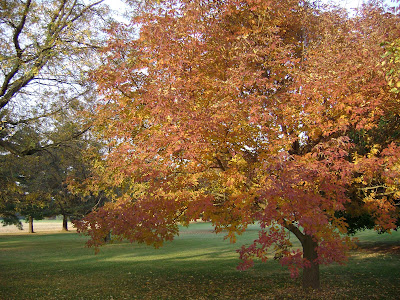 Even the ash trees, not normally the showiest in my yard, are putting on a show.  Their time is brief, though--this photo was taken two days ago, and this afternoon I noticed that the wind has already helped half the leaves to fall.  If ever there was a time, now is the time to go out and enjoy every moment, or as the oft-quoted line from Elizabeth Lawrence says,
"Everyone must take time to sit and watch the leaves turn."
Garden Bloggers' Bloom Day is hosted each month by the ever-entertaining Carol of May Dreams Gardens.  Do stop by to see what is blooming all over the world right now.
Posted by Rose at 2:30 PM