I'm sad to say that my tomato plants are not looking too good right now. After a promising start this summer, they are slowly succumbing to leaf blight. While they probably won't last until frost, in the meantime I have been harvesting a bounty of ripe, red fruit; so much, in fact, that even though we have been eating BLT's frequently and having fresh sliced tomatoes with nearly every meal, I still have more than enough to preserve for the winter.

After someone asked me how I froze tomatoes, it occurred to me while preparing a batch of juice for the freezer that with so many people planting vegetable gardens for the first time there might be some people out there who have no idea how to preserve tomatoes. This post is for you! Veteran vegetable gardeners who have been canning or freezing tomatoes for years may want to skip this post . . . or you might have a tip or two to add to my method.

Most people can tomatoes, either diced, as juice, or as sauce. But after an unfortunate canning experience many years ago that resulted in a bandaged arm with second-degree burns, I swore I'd never use a pressure cooker to can again. (Don't let me discourage anyone else from canning, but let that be a reminder to always check your canning jars beforehand for possible cracks.) Tomatoes, though, can be safely canned using a water-bath process or even simply ladled into hot, sterilized jars. However, I have plenty of freezer space, and the freezing process is so much simpler; besides, you don't have to worry about a jar that doesn't seal properly and losing some of your hard work. 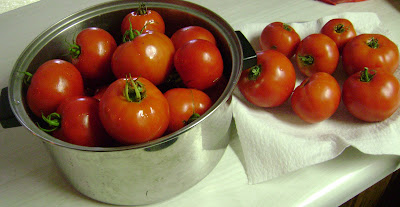 Follow these easy steps to preserve some of those extras from your garden this year:


1. Wash and stem the ripe tomatoes.

If you are making sauce or juice, as I do, there's no need to peel. Cut out any bad or "mushy" spots. This is one advantage to freezing over canning: generally, you should use unblemished fruit for canning to avoid spoilage. Ensuring the tomatoes are completely ripe is also necessary so that they have a high enough acidic content for preserving without using a pressure cooker. This isn't that important with freezing. You can use tomatoes that aren't quite as ripe as you'd like, and you can simply cut away bad spots and use the rest. I use the "sniff" test to ensure I've cut away enough--your nose knows if a tomato is spoiled or not:) "Waste not, want not," as my mother always taught me. 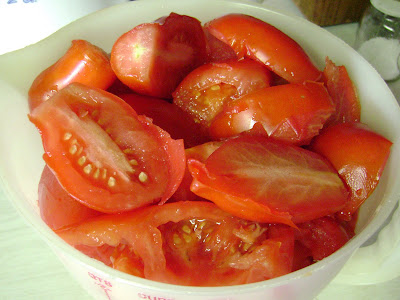 2. Cut the cleaned tomatoes into halves or quarter sections and place into a saucepan or stockpot.

The most time-consuming part of the whole process is now complete! 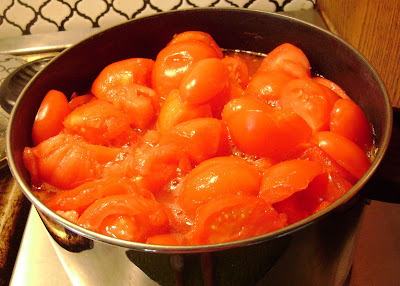 3. Mash the tomatoes down somewhat--I use a wooden spoon--so that some juice accumulates on the bottom. Place on very low heat to avoid scorching.

Once the tomatoes have begun to cook and enough juice has formed, you can turn up the heat somewhat to a simmer. Occasionally, stir and mash the tomatoes to ensure even cooking. At this point, you can walk away for awhile and read some blogs, or do as I did last Saturday--watch the first half of the Illinois-Missouri football game . . . As it turned out, my time would have been better spent reading blogs:) 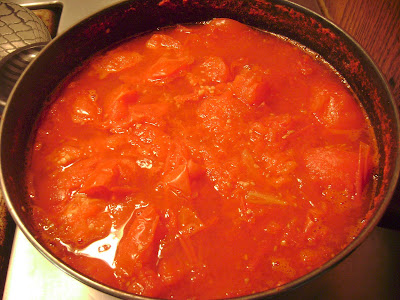 4. Simmer tomatoes until the tomatoes are the consistency of "mush."
Cooking time varies, but I usually allow 1-2 hours. 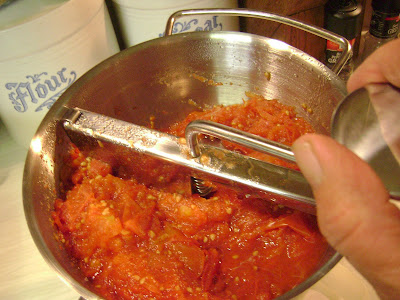 4. Puree and strain the cooked tomatoes into a large bowl or pan.
You can use a blender, food processor, or colander to puree the mixture. However, last year when I was making so much applesauce, I purchased a stainless steel food mill. It's well worth the investment if you are going to be preserving tomatoes, applesauce or jam. A few quick turns of the handle, and the contents were easily pureed and strained. In fact, steps 4-6 were all accomplished during halftime of the football game! 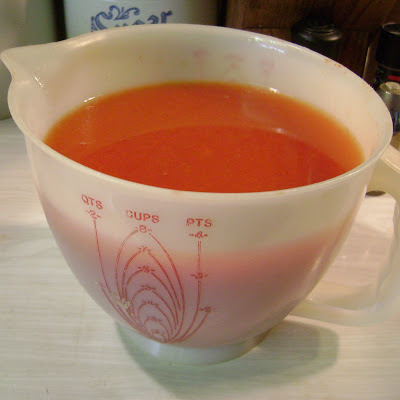 At this point, if you prefer to make any kind of sauce with the juice, return it to the same pan and cook until it reaches the desired consistency and add any spices you wish. If you are making juice, continue with step 5 . . .
5. Pour the juice into suitable freezer containers, leaving at least 1/2 inch of space at the top for expansion. Allow the juice to cool for a short while before sealing the tops to avoid the formation of ice crystals later. 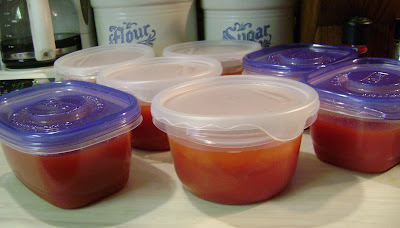 6. Label the containers, including the date, and place in your freezer, making sure containers are level until completely frozen.

That's all there is to making your own homemade tomato juice!
This particular batch made approximately 10 pints of juice. While it may seem a little more work than picking up a can off the supermarket shelf, you can be sure this is 100% juice with no additives or preservatives. I do not add salt to mine, and last year my husband and I agreed the homegrown juice was sweeter than the commercially canned and made the best-tasting chili and vegetable soup ever. Besides, the tomatoes are free, and they would surely go to waste if I didn't preserve them in some way. I was raised by a very thrifty mother who did not believe in wasting food--or anything for that matter. She, as well as my grandmother, spent many hours each summer canning or freezing the bounty of their gardens so that their family could eat healthy meals throughout the winter.

I'm not only preserving produce, I'm preserving a family tradition.
Posted by Rose at 4:00 AM