I'm a little late for this month's Vegetable Garden Update, sponsored by Tina at In the Garden, but that seems to be the story of my life lately--always a day behind. Looking on the brighter side, though, it does give me a chance to add a few other odds and ends for a mini-Mishmash Monday, the brainchild of Monica the Garden Faerie. 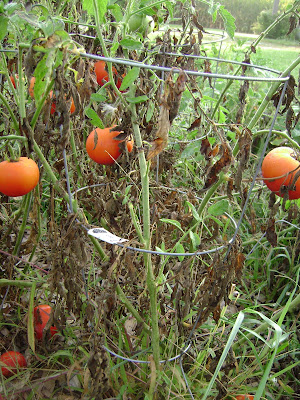 The big news in my vegetable garden these days is not good news. Those tomato plants that once were so green and prolific have fallen victim to tomato blight. I had a similar tragedy last summer and vowed to keep a watchful eye over them this summer and spray them at the first hint of wilt. However, they were fine in mid-August when I left for Oregon, but by the time I got back many of the leaves were turning brown with others showing the tell-tale spots of more wilt to come. I purchased some fungicide, but after consulting with tomato expert Hortense Hoelove and her alter ego Carol, I decided it was too late to do anything about it. 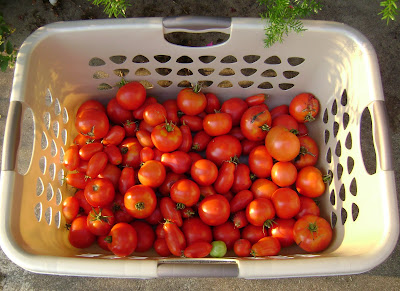 Fortunately, there are still many ripening tomatoes on the plants that can still be picked. Shown above is the spoils from one such picking a week ago. (In case you're wondering, I was hanging out clothes on the line beforehand and didn't have another container with me; I wasn't expecting such a bounty.) Hubby and I have eaten enough fresh tomatoes to boost our antioxidant levels, there is enough juice in the freezer for the winter, and now I'm making tomato sauce. The only thing I'm really sad about is that I didn't get to try any tomatoes from the one Cherokee Purple plant I had. It, too, has been hit by the blight and looks especially pathetic; I would have included a picture of it, but I couldn't crop out the weeds:) 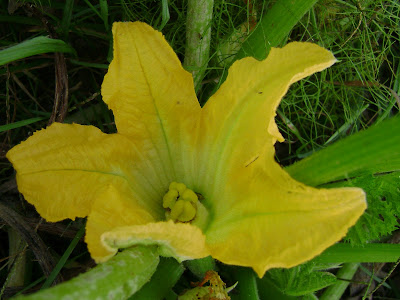 Elsewhere in the veggie garden, things are winding down, but there is still harvesting to be done. For once, the zucchini did not get infested with squash beetles, and my one lone plant is still blossoming, promising a few more fruits before the frost hits. 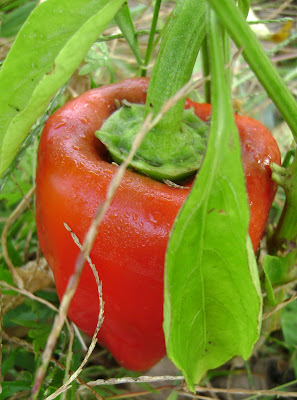 The green peppers have done very well, and I was surprised to find this nice red one yesterday. Bell peppers will turn red if they're left on the vine long enough, but usually mine spoil or get eaten by bugs before they make it this far. I don't grow many peppers even though they're chock full of vitamins, simply because my sensitive stomach doesn't tolerate them well. But this red pepper is so tempting I think we may have fajitas tonight . . . with a Pepcid for dessert:) 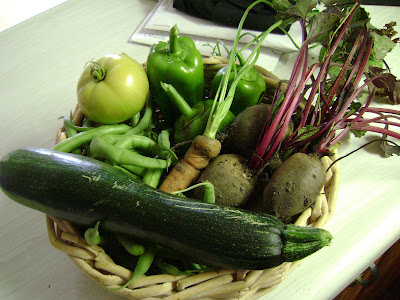 Overall, I would have to say this year's vegetable garden has been a success, largely due, I'm sure, to the regular rainfall we had up until the last few weeks. Besides tomatoes, peppers, and zucchini, we've had carrots, onions, and my first ever crop of beets. But the best producer, by far, has been the green beans. This morning I went out to the garden, debating whether to pull the plants, their leaves either brown and withered or peppered with holes made by hungry grasshoppers. But then I noticed more beans on the plants--I eventually picked a large saucepot full of fresh green beans!

You will also notice in the photo above one green tomato. No, I don't usually pick green tomatoes, but I have an occasional helper in the garden . . . 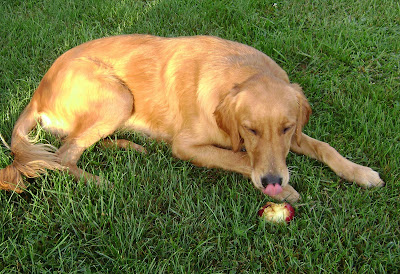 . . . Husband thought it would be cute to show littlest Grandson how to pick tomatoes. Grandson thought it was indeed fun, but even more fun was to use the tomatoes like baseballs. Sophie quickly picked up on this game, chasing down the fly "balls" and now often picks a few to entertain herself when her little buddy is not around. Here she's chewing on an apple that fell to the ground, but she's just as likely to have a tomato in her mouth. Needless to say, the tomatoes she picks never make it into juice for the freezer.

And now for a few Mish-Mash odds and ends . . . On my last post I showed a photo of a small black caterpillar. Several of you identified it as the first instar of the black swallowtail caterpillar. Once again, you bloggers have come through with great information! 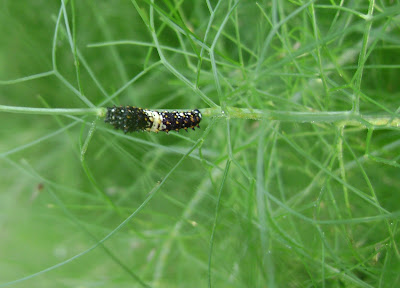 Here's a closer look at the little fellow. I've been checking the fennel and parsley nearly every day and have found they're full of caterpillars in various stages. 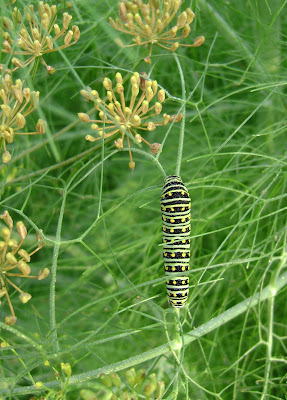 This guy must be in one of the next stages, because he's about half the size of the full-grown caterpillars. And if you compare him to the large one in the next photo, you'll see less black and more green as they mature. 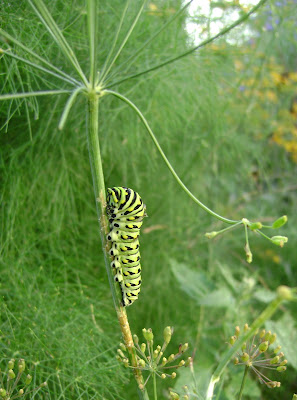 Ah, the things we learn from blogging!

And speaking of bugs, the last two nights we have had swarms of some tiny little flying insects. 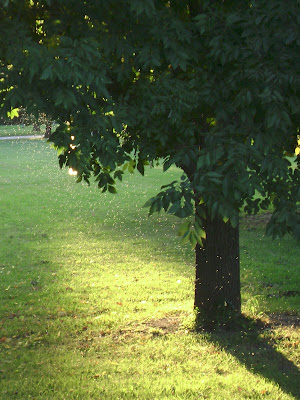 It's difficult to see here, unless you enlarge the photo, but the little white dots are swarms of tiny creatures with nearly transparent white wings. 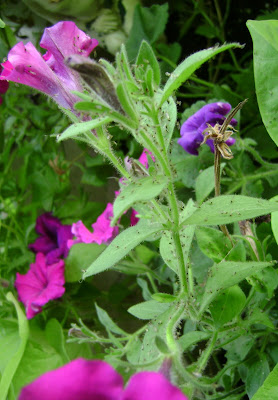 They also liked my petunias, covering the leaves and forming a rather sticky, web-like substance. Again, you can see these much better if you enlarge the photos. 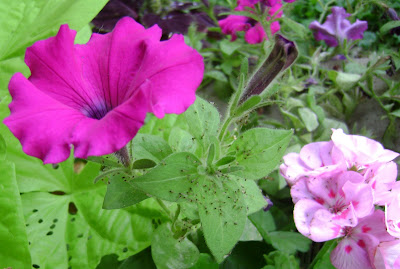 I checked out a few websites, but still have not been able to identify them. Any ideas?
Although it may seem I have been very busy in the garden, I have a confession to make--other than watering containers and picking tomatoes or looking for photogenic insects, I have really neglected the garden the last two weeks. Oh, I have excuses--we had a new roof put on the house, and flying shingles and pounding nails don't make for tranquil gardening time. Or I could blame it on the fact that I have been substitute teaching once again, too tired in the evening to do anything too strenuous. No seeds have been collected, no weeds have been pulled, and no (I can hear the gasps now!) bulbs have been ordered. But this week, no excuses! Time's a-wasting--tomorrow is the first day of fall!
Posted by Rose at 4:00 AM