It's almost Wednesday once again, and this week we have come to the letter K, a challenging one for my usual gardening references. 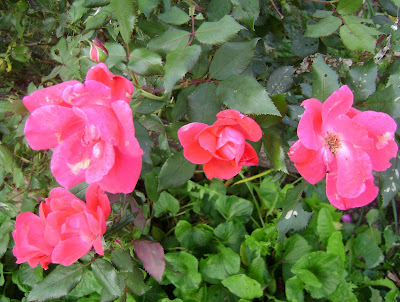 I suppose I could show you my Knockout Roses, which have finally begun to bloom again after surviving an attack by sawflies early in the season and the voracious munching of Japanese beetles the rest of the summer. But the photo isn't that good--any sunlight seems to turn these deep red blooms into a fluorescent pink in a photograph. But this is the only flower in my garden that begins with the letter K.

The operative K word around here the last few days has been Kerchoo, but I don't think my red nose or a pile of used Kleenexes would be particularly appealing. And, since I am getting better anyway, let's turn to some other areas for appropriate K words. 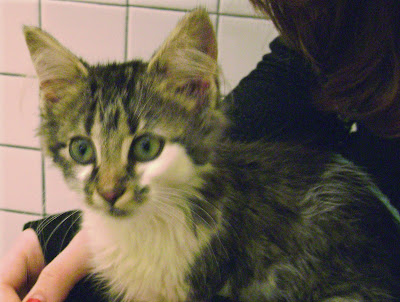 What is more appealing than a cute Kitten? This is Jessie, an orphan at the Humane Society where my granddaughter and I volunteer several times a month. I am happy to say that when Granddaughter and I returned to the shelter yesterday, Jessie had already been adopted. 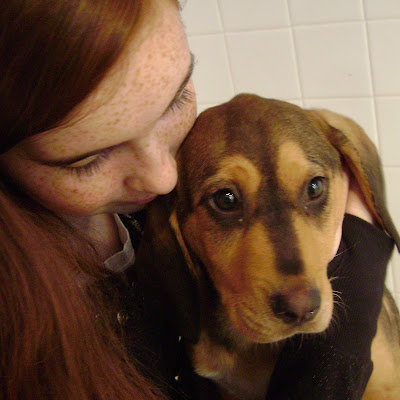 As had Willow, a bloodhound mix, and her brothers. Puppies never stay long at the shelter, which has a high rate of adoption. With a face like this, who could resist this sweetie? The hardest part of volunteering for both of us is not coming home each week with a new pet:) If you are considering adopting a pet, think about adopting an older pet. They are the ones who stay the longest at the shelter, yet they offer so many advantages over mischievous kittens and puppies. 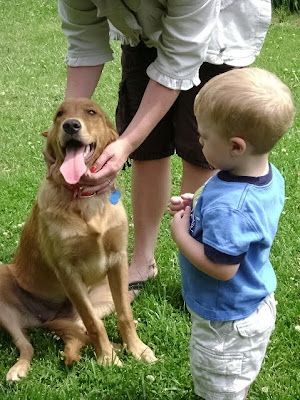 Speaking of mischievous puppies . . . this brings me to another joy in my life, Kids, specifically, Grandkids. All of the grandkids love to come to Grandma's house, especially to visit with Sophie. Even though littlest Grandson looks a bit hesitant here, he has learned how to say "No" to Sophie and enjoys her sloppy puppy kisses. 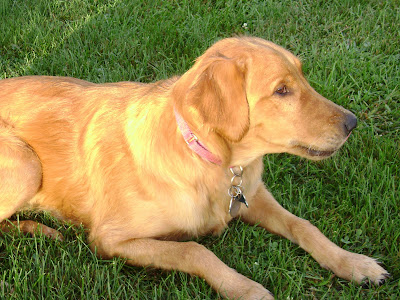 And while we're on the subject of Sophie, I have never mentioned one of her proud accomplishments. We have attended three different sessions of dog training since April, and in early August Sophie received her AKC Canine Good Citizen Award. This is a national test, comprised of several different areas which must all be performed satisfactorily in one test session. The Canine Good Citizen means that Sophie responds to various commands, such as "sit," "stay," and "come," and treats strangers and other dogs politely. I am very proud of her; however, the test did not include avoiding chewing up pens, ripping up carpet, or unstuffing stuffed animals. I guess there's only so much a girl can learn at one time:) 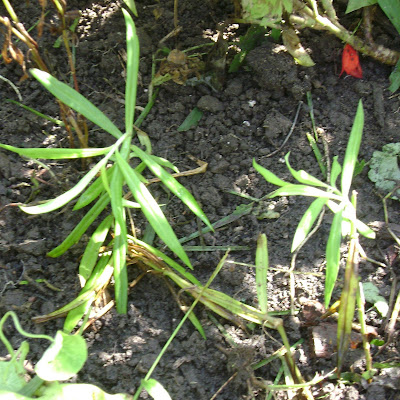 K is also for Kindness. One of the benefits of blogging has been getting to know so many wonderful people here. Garden bloggers, in particular, are always willing to share not only their knowledge of plants and techniques, but also in many cases the bounty of their gardens. Last week I was thrilled to receive a package in the mail from Gail, who knew I had admired her "Perfectly Pink Phlox Pilosa" for a long time. These little plants may not look like much right now, but next summer I'm hoping for a glorious show of pink blooms in my Butterfly & Friends garden, along with a few Penstemon X and Iris Cristata, also sent by Gail. 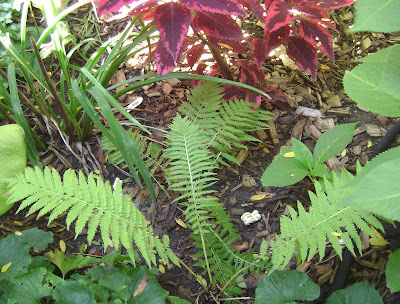 I've mentioned in other posts about some of the seeds I've received from other bloggers. But I've neglected to mention some other goodies shared by garden bloggers, including several starts of Cinnamon Fern, given to me by Lisa of Greenbow earlier this summer, as well as some Siberian Iris sent by Marnie this past spring. And just a few weeks ago, Tatyana, who I've only recently gotten to know, kindly sent me foxglove seeds and some seeds from her gorgeous red poppies. Monica, who actually visited my garden while I was away in Oregon, also gave me a lovely chocolate Joe Pye weed that is the perfect addition to my Butterfly Garden. Thank you to all of you for sharing these with me and making my garden a more beautiful place.

How beautiful a day can be
When kindness touches it!
--George Elliston

For more views of the letter K, visit the ABC blog, hosted by Mrs. Nesbitt.
Posted by Rose at 3:30 PM