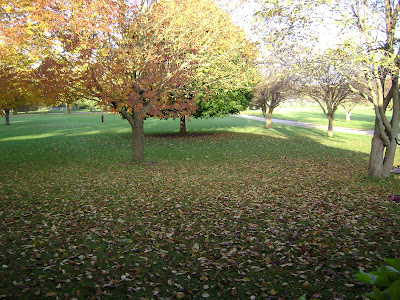 . . . Eventually. Right now on these crisp fall days it is hard to think of winter. The trees are beginning to turn: the hackberry is a luminous yellow-gold, the ashes are shades of gold, orange, and rust, and the maple leaves are changing in a downward progress to a bright orange. While the oaks are dropping a few leaves--and lots of acorns--they are still green for the most part. Occasional gusts of wind have scattered leaves across my front lawn. Temperatures have finally dropped to seasonal 60's during the day and low 40's at night, but this has truly been a magnificent fall.

Yet we know that winter is inevitable. I was reminded of this a few weeks ago during a very warm spell when I spotted this little guy clinging to the porch wall. 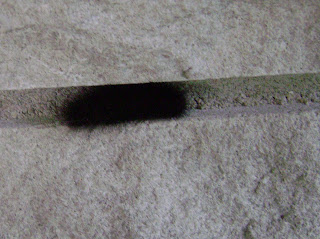 "Oh no," I thought, "he's black!" Why should I worry about his color? It's simple--around here anyone would tell you that the color of the common woolly worm is a sign of what type of winter we are going to have. A light colored woolly worm indicates a mild winter; darker colors signify varying degrees of a harsh, cold winter. A black woolly worm, obviously, is not a good sign!

I thought the belief in woolly worm prognostication might be a Midwest legend, but I discovered yesterday that it is more widespread. Woolly worm festivals are held throughout the United States, according to a news article by a local County Extension advisor. This advisor writes a weekly column in our local paper every Saturday, and it seems she anticipates every gardening and nature question I have: she was the one who identified and explained those pesky pirate bugs that appeared out of nowhere a few weeks ago as well as the origin of the equally pesky Asian Lady beetles. This week's column was all about woolly worms, saving me from having to do any other research for this post. (Thanks, Ms. Mason!)

I learned that "woolly bears," as they are also sometimes called, are actually the caterpillars of different species of tiger moths. In central Illinois, "the most common and most famous is the banded woolly bear with its bands of red and black hairs. " Woolly worms are actually present all summer long, but we don't usually notice them until fall. Often times a "herd" of them can be seen crossing the road en masse.

Question: Why did the woolly worm cross the road?

Answer: To find a warm place to spend the winter under leaves and bark.

No, that wasn't a joke; it's a scientific explanation. Unlike other butterflies or moths, the woolly worm spends the winter as a caterpillar; when spring comes, it feeds for a short time, then pupates, and emerges a few weeks later as a tiger moth.

I have no idea how the legend of the woolly worm as a weather predictor came about, but I did learn from this article that the color of the woolly worm has more to do with the severity of the past winter than the winter to come. As woolly worms age, they molt, becoming lighter in color. So in reality the black woolly worm I spotted above was probably just a youngster.

The problem in forming forecasts based on woolly worms is that you might spot caterpillars of different colors. A week or so after spotting my first black one I spotted this lighter orange one feasting in the garden. Since then I have seen only a few caterpillars, ranging in color from black to a light cream. 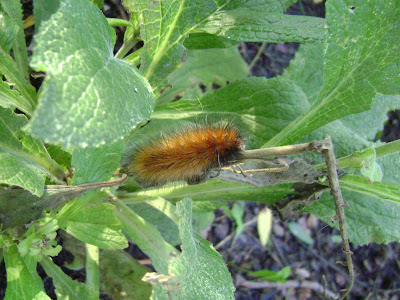 So how do you know which woolly worm to believe? If you live in central Illinois, you can tune to the local television station and get the "Woolly Worm Forecast." Weatherperson Judy Fraser gathers information from a number of area volunteer "woolly worm reporters" and bases her annual prediction on their sightings. This year's report found that 60% of local woolly worms were black or dark brown, 30% were white, and 10% were multi-colored. Her conclusion? Based on the high percentage of dark caterpillars, this winter will be "cold and snowy."

Of course, Judy depends on more scientific methods of weather predictions, but she did say that the woolly worm forecast has been 75% accurate in the past. This is not the only method she uses in long-range forecasts, though: another popular method is looking at persimmons. I don't remember this method as well, although I think it has something to do with the size and shape of the persimmon seeds.

As for me, since I don't have any persimmon trees, I'm going to have to depend on the woolly worms for my winter preparations. Right now I am going to enjoy this beautiful autumn weather for as long as it lasts, but I might just go out and buy a new snow shovel before the rush hits!
Posted by Rose at 1:00 AM