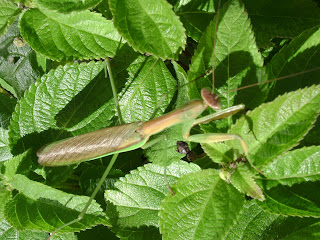 I thought I might have to come up with a clever title to get you to read one more post on the praying mantis. But if you can bear with me, I promise this is my last post on the mantis--at least until next year. And there is a brief comment about Wall Street at the end of this. When I pictured a couple of mating mantises last week, I received many comments that included some interesting facts about the mantis I wasn't aware of. So I decided to do a little research on my own to find out more about these fascinating insects that seem to love my garden. All information comes from Wikipedia, which isn't the most reliable source if you're doing scholarly research, but it's a handy resource for basic information.

There are more than 2000 species of mantises worldwide. The name for the most common mantis family is mantid, but because the entire order contains eight other families, the proper term for members of this order is mantis. Mantis comes from the Greek, meaning prophet or fortune-teller. The closest relatives of this order are the Isopteran, which are termites, and the Blattodea, cockroaches. Hmmm, I do hope the mantises don't invite all their distant relatives for a family reunion at my house.

Autumn is the time for mating, which may explain my good fortune in getting that photo last week. The female lays between 10-400 eggs, which are deposited in a "frothy mass" which then hardens, forming a protective shell. The egg case is called an ootheca. In a few species the mother remains nearby to protect her eggs. 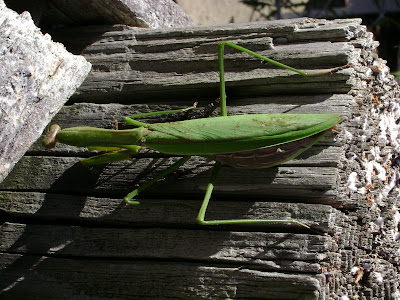 Wikipedia included several photos, including one of the female laying her eggs, but didn't show a pregnant female. I spotted this large lady (I assume) two days ago. Notice her plump underbelly. The blurry photo below is an even closer look at her protuding belly. I can't be sure, of course, but I can't help but wonder if she is getting ready to lay her eggs. I will be scouring the flowerbed where I found her for an egg sac the next few days. 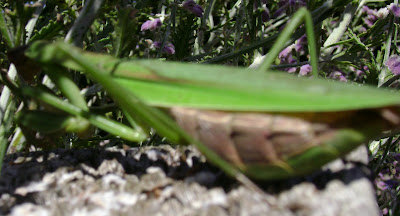 What many might find most interesting is the mating ritual itself. Praying mantises are cannibalistic, and as several of you pointed out to me last week, this predilection includes their male suitors. Scientists have studied mantises in captivity which are particularly prone to this behavior, and have drawn a few conclusions. Briefly, a wise male mantis will choose a female who has just eaten a full meal before mating, and, once he has satisfied himself, he should leave quickly!

The mantis uses camoufluage to hide himself from prey, which is why they are often difficult to spot. Usually brown or green, they blend in well with plants and are often mistaken for a small twig or stem. If you look closely at a mantis, it seems to be looking straight back at you. That's because they can rotate their heads 300 degrees, permitting a great range of vision, which also allows them a distinct advantage in spotting prey. Don't worry, though--they might bite, but they're not dangerous to humans.

The natural lifespan of a mantis is 10-12 months, but in colder areas it will die during the winter. During its lifetime, the mantis increases in size by replacing its outer body with an exoskeleton, molting up to 5-10 times. After the final molt, most species have wings. This was another new fact for me--I had no idea a mantis could fly. One day I was sitting on the porch swing when a strange creature came flying at me, veering like a drunken pilot. When he landed, I discovered this unusual mantis: 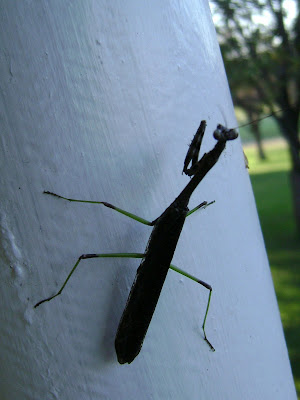 Yes, he is black. I couldn't find any reference in the article to a black species, and this is the only black mantis I have ever seen. However, in discussing the mantis' ability to camoufluage itself, the article did say some species in Africa and Australia have been found to turn black in order to blend in with environments plagued by brush fires. Could this be an exotic mantis come all the way from Africa or Australia to visit?? I doubt it, but it certainly was intriguing.

I've always thought of the praying mantis as a gardener's good friend; in fact, egg cases of native species can be purchased as a means of natural pest control. However, until some of you mentioned this, I didn't realize they also have a dark side. By nature predatory, the mantis eats not only pests, but beneficial insects as well, including butterflies sometimes. Larger species can also eat small lizards, birds, frogs, snakes, and even rodents. According to the article, they wait for their prey to come near and then lash out with "remarkable speed." I'll take their word for it--I've never seen a mantis move quickly, and I can't imagine them killing a rodent. (Maybe that's why I'm not bothered by squirrels??) 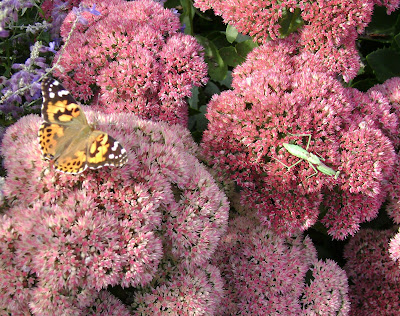 Fly, little butterfly, fly!! He's not as harmless as he looks!

So there you have it--everything you ever wanted to know about the praying mantis, and probably more than you cared to know! Despite its dark side, I'll continue to welcome him into my garden.

I am really bummed today : Things aren't looking too good for my Chicago Cubbies today. And that's all I'm going to say on the subject. . .

And another bummer: I don't usually comment on politics here, but the current economic crisis on Wall Street has me steamed. Perhaps by the time you read this, Congress will have passed the $700 billion bailout. A recent article by an AP writer tried to make this huge number comprehensible to those of us who have never seen a million dollars, let alone 700 billion. What else could you do with this much money? For starters, it would cover"one year's health care bills for more than 85 million seniors, disabled people, children and low-income Americans..." It could also "ensure universal health care coverage for six years." $700 billion would go a long way toward developing alternate energy sources and eliminating our dependence on fossil fuels. Any of these would be worthwhile causes, but the fact is we don't have an extra $700 billion in our Treasury in the first place, let alone spending it to save greedy or foolish financial "experts."

Now before anyone points out my naivete, let me be the first to admit I know nothing about economics. Through all my years of schooling, I somehow managed to never take a course in economics. When I receive my quarterly report on my small annuity (which has been losing my hard-earned money, I might add), I don't understand the difference between a large-cap fund and a mid-cap one. I still don't know who Freddie Mac is, and the only Fannie Mae I know sells delicious chocolate candies.

I don't know who is to blame for the current crisis, though everyone seems eager to point a finger at someone else. But I have trouble relating to CEO's who make millions of dollars in salary each year and have "golden parachutes." I don't think I even have a parachute. In fact, if the state's Teachers' Retirement System goes under, you will probably find me spending the rest of my life smiling and saying, "Welcome to Walmart . . .would you like a shopping cart?" Heck, maybe even I am partly to blame. When my husband and I got our "economic stimulus package" in June, instead of blowing it on a new entertainment system or a weekend in Vegas, we put almost all of it in savings. Had I only known... 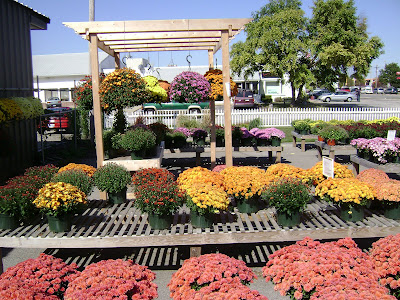 I am doing my part to keep the gardening industry afloat--I bought more plants yesterday.


Seriously, I don't know whether Congress should pass the proposed bailout or not. Either way, I know it's going to eventually trickle down and affect every Joe or Jill Average American. In some way we are all going to have to pay for it, or our children eventually will. I particularly feel sorry for all the innocent people who may lose jobs or those whose retirement savings may be jeopardized or even lost. In the end, it always seems it's the "little guy" who gets hurt.
Posted by Rose at 4:00 PM