Thirteen Ways of Looking at a Zinnia* 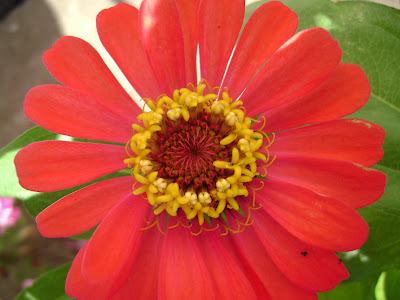 Call them "common flowers" or "Grandma's Flowers," the zinnia is an old-fashioned flower that is hard to beat in the garden. They're easy to grow from seed, bloom for a long time, and come in every color imaginable. A few weeks ago I visited a local plant center to check out their end-of-the season bargains. A branch of a very nice garden center in a nearby town, the stand is business only during the summer, so by late July they drastically cut prices to get rid of inventory. I picked up a new sedum and a few smaller sedums, but I couldn't pass up the zinnias--$1.00 for a large pot of five! 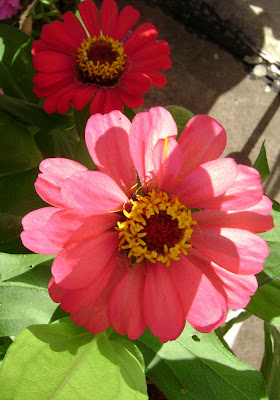 I split up the two pots I purchased, planting some in bare spots in the garden and then filled in a couple pots that needed a little extra color. 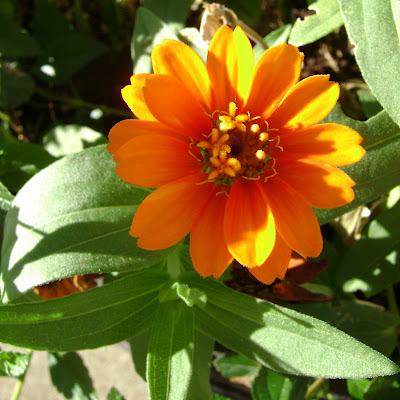 The past few years my zinnia plantings have been confined to the "Profusion" series. The Profusions are limited in available colors, but as their name suggests, they're prolific bloomers. They're smaller than most zinnias, but are perfect for container plantings. I am not fond of orange flowers (sorry, Frances), but these orange profusions are so showy and combine well with yellow lantana and the yellow celosia in this pot. 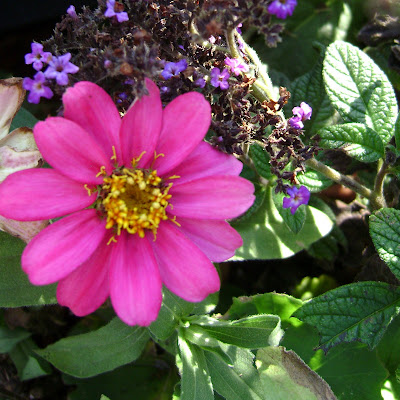 Not as easy to find as the oranges, the cherry pink Profusion is my favorite, because it's pink, of course! I use them in containers, but my green-thumbed aunt planted them as a border along her fence a year ago, and they spread out to cover the whole area and grew to a foot tall or more. 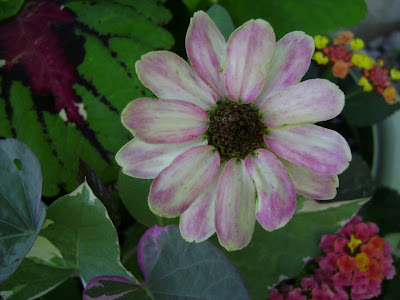 This is another "cherry pink" planted in another pot--from the same four-pack as the one above! The only explanation I can come up with for its very different appearance is that this pot is in the shade most of the day. 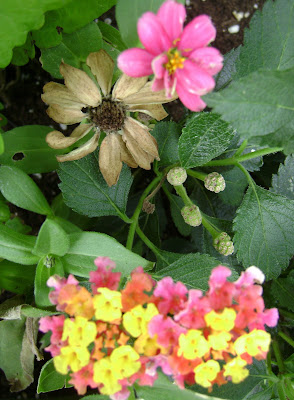 Besides the oranges and pinks, this earthy fall color is also available if you're patient or lazy enough like me. Ha, ha, just checking to see if you were paying attention--obviously, I need to do some deadheading. 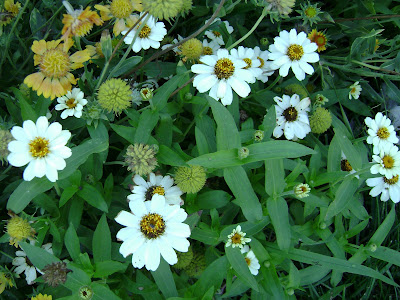 The only other color available in the Profusion series that I know of is white. I had to hunt a little harder for these, and by the time I found a few packs of the whites they were on their last legs. But, despite a slow start, they've recovered nicely and provide a border of white in front of my "Oranges and Lemons" gaillardia in the roadside flower bed. 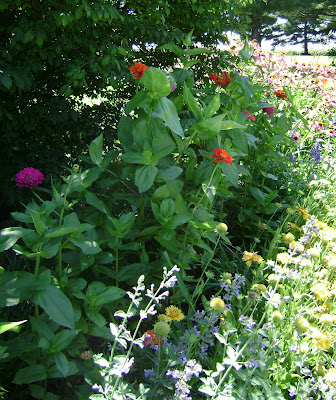 Zinnias can be started from seed indoors in early spring or sown directly in the ground once all danger of frost is past. After seeing a post of Lisa's in early spring, I decided a stand of taller zinnias would be perfect at the back of my roadside flowerbed. After a dismal failure at starting seeds indoors, I sprinkled a packet of seeds here, only to have them flooded out, I thought, by the torrential rains in early June. They're obviously tough plants, because many of them survived the flood and have just blossomed in the last two weeks. 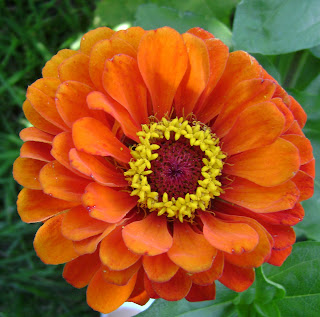 This packet of seeds was called "Fruit Smoothie," described as "a cooling color combo of intense 3" double blooms" that grow to 30-36" tall. The flowers are definitely vivid shades of orange... 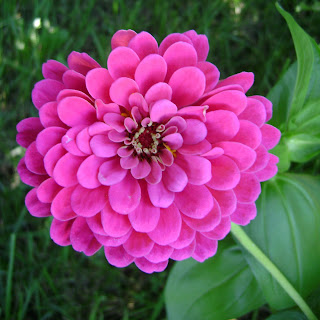 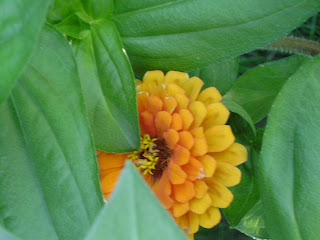 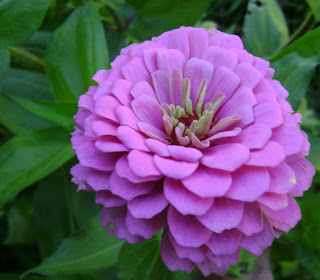 or the perfect shade of lavender. I must have used the rest of another packet of seeds also, because I do have a few red ones as well. 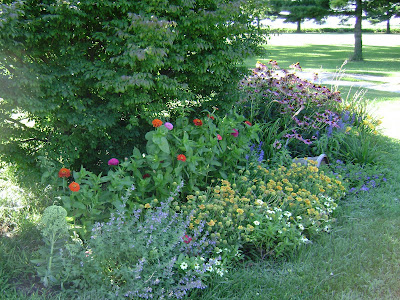 All in all, I have been very happy with the "pop" of bright color they provide in the back of this flowerbed. They may be not be exotic, but it's easy to see why the zinnia has been popular for years. I think we should call it a classic.

* The title, in case you don't recognize it, is a shameless rip-off of Wallace Stevens' poem, "Thirteen Ways of Looking at a Blackbird."
Posted by Rose at 9:10 AM