Finding Peace with the Natives

The last few mornings I have been on early morning chauffeuring duty for two of my grandchildren. I am not a morning person--I might get up early, but I'm not really functioning for a couple hours. But my daughter-in-law had to go on a business trip, and my son has to leave very early for his commute to work, so it was up to Grandma to be at their house by 6:30 AM to drive the children, one to preschool and one to daycare 15 miles away.

Friday morning after dropping both of them off, I made an impulsive decision to stop for a walk at a park I've passed many times, but have never taken the time to visit. 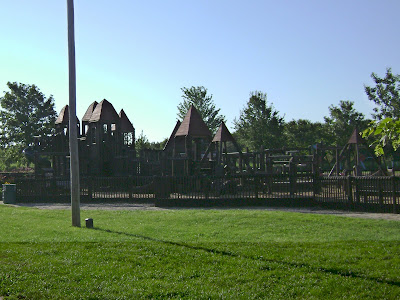 Meadowbrook Park is a relatively new park and is a popular spot for many in the community. My grandchildren consider it a treat to play on the elaborate play structure, which is usually filled with children on weekends. But another attraction of the park is its many trails for walking and jogging. My son, who began running marathons a few years ago, occasionally trains here. I wanted to walk, but I also wanted to see all the wildflowers along the trails. 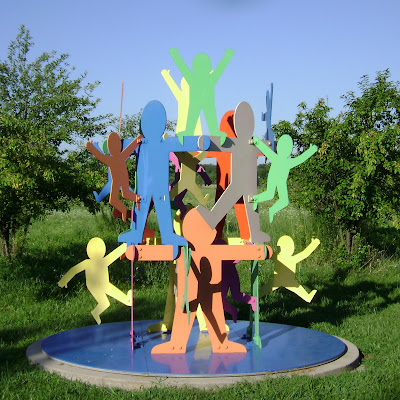 I chose the path around the sculpture garden because it was the shortest--just short of a mile, which was about as far as I thought I could go at 7:30 in the morning without any caffeine yet. A longer trail winds around a prairie grass planting, and a short path encircles a wildflower garden, which unfortunately I didn't discover in time. I will definitely make plans to go back again to see both of these areas. 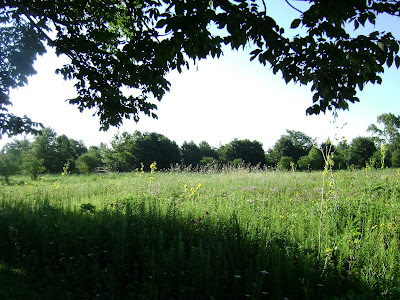 Walking across a small bridge to the beginning of the path, I was greeted by a field of tall grasses and wildflowers. 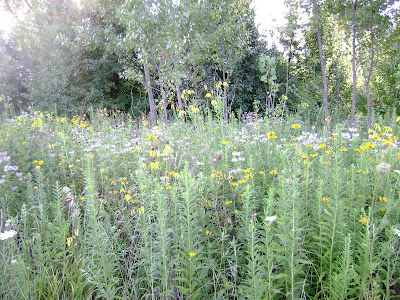 It was a perfect morning for a walk, comfortable temperatures and low humidity for the first time in many days. Rays of sunlight peeked through the trees and illuminated the tall flowers. The sounds of traffic faded into the distance, and I began to feel the stresses of the week melt away as I began my walk. My solitude was unbroken except for the occasional like-minded walker I met along the path. We exchanged pleasant "good mornings" without breaking stride. 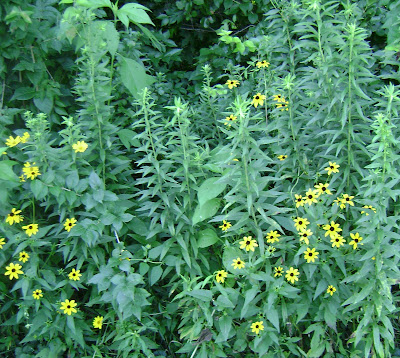 The beginning of the paved walkway is sheltered on one side by trees and shrubs and on the other by masses of native plants. I stopped to admire many of the plants along the way. Although I could identify some, I wasn't able to identify others, even after checking out a few websites on prairie plants. These rudbeckia weren't difficult to identify, of course. A Midwest native plant, they are found in the wild as well as in cultivated gardens. 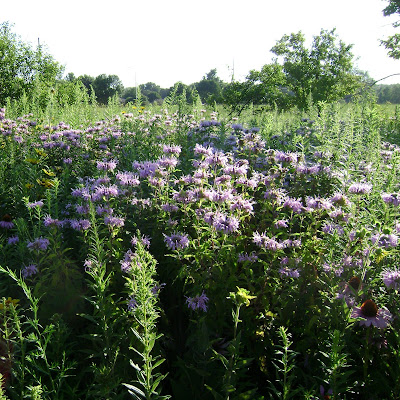 I wasn't sure about this plant, but its blooms looked like those of a bee balm. Sure enough, I did find this one in my source--Monarda fistulosa, or wild bergamot. These were at least four feet tall. 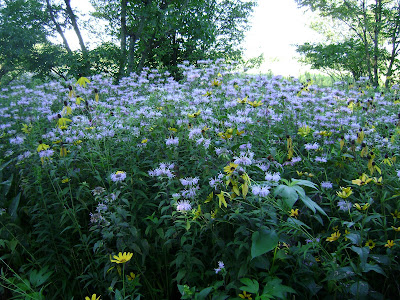 A prairie garden sounds appealing, doesn't it? No need to worry about weeds, color combinations, or artful arrangements of plants--just let nature do its work. Here the Monarda and Rudbeckia mingle together happily. 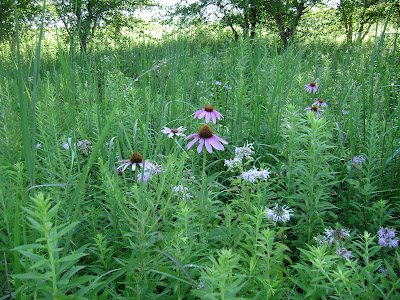 And what would a prairie be without my favorite, the purple coneflower! It popped up in many places along the path, seemingly happy to mingle with the other natives. 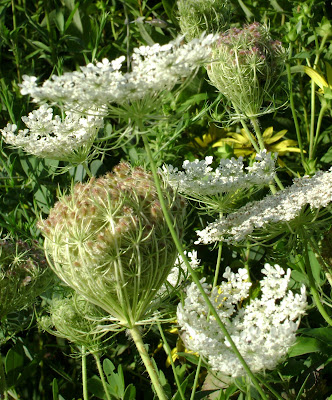 I don't know the botanical name of this plant, but I wouldn't use it if I knew--I much prefer its common name of Queen Anne's Lace. A native that is very common in any uncultivated area, it doesn't deserve being called a "weed." 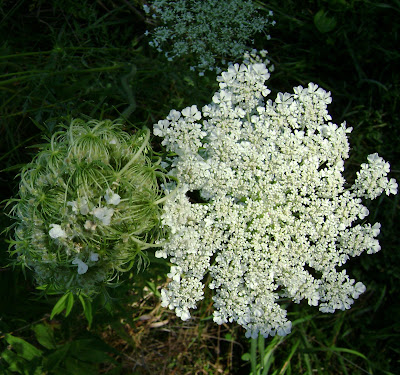 As a child, I would often gather bouquets of this airy white flower. 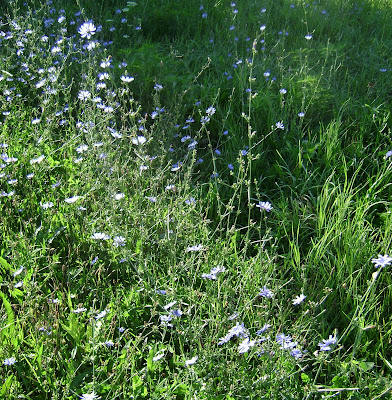 Most people would definitely call this a weed, but I've always been rather partial to it. Try as I might, I could not find the botanical name of this plant. We always called this "chicory," but I think it is in the aster family. The true blue of its flowers was hard to capture in the bright early morning sun. 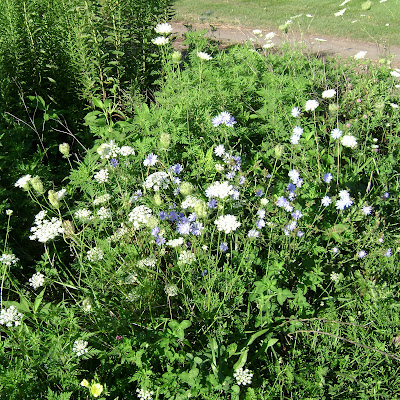 Blue is my favorite color, and it's not often you'll find a true blue and white combination like this one: Queen Anne's Lace and chicory. 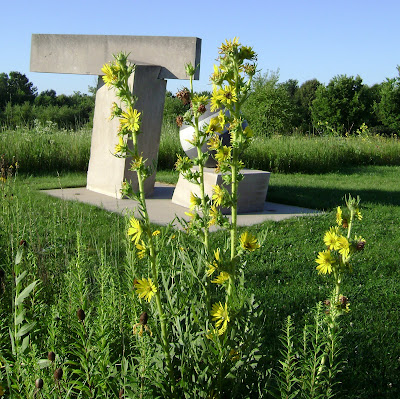 This striking flower is one I've seen along roadsides for the first time this year. I'm pretty sure it is a variety of Helianthus, or sunflower, several varieties of which are native to this area. It rises above all the other prairie plants, reaching a height of 8 or 9 feet.
This plant has been correctly identified as a compass plant, Silphium Laciniatum. Thanks, Joyce! 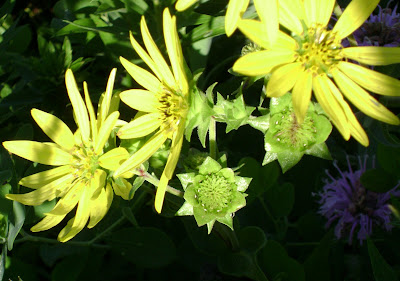 A few bent plants enabled me to get a photo of their flowers. According to a website on Illinois wildflowers, the common name "compass flower" came from the belief by pioneers that the leaves pointed north-south. Apparently they're very common, but I've never noticed them until this year! 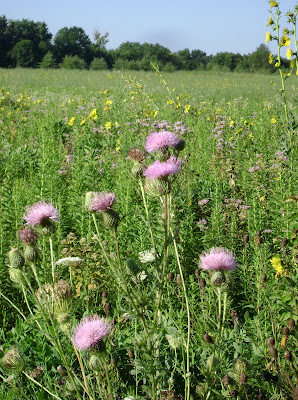 This plant is a mystery to me. Perhaps someone can identify it? 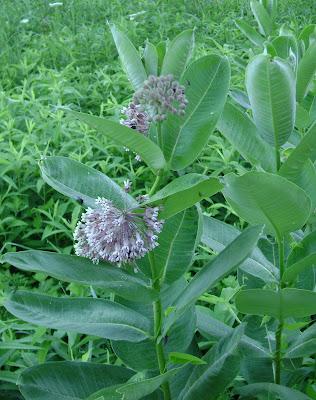 This plant, however, is no mystery! Growing up on a farm, I never learned how to drive a tractor, but one of my few farm-related chores every summer was to walk beans. For those of you lucky enough to not understand the term "walking beans," it means to literally walk up and down every row of beans, cutting down every weed in sight. This milkweed would have been chopped down immediately; to allow it to flower and go to seed would have meant a thicket of them the next year, choking out the crop of soybeans. Strange, but I never noticed its lovely lavender blossoms before. Milkweeds are a popular attraction for butterflies, but I didn't notice many butterflies on this walk, perhaps because it was too early in the morning. I did notice many bees, though, and at least one rabbit or other furry creature scurried into the undergrowth before I could catch more than a glimpse of it. 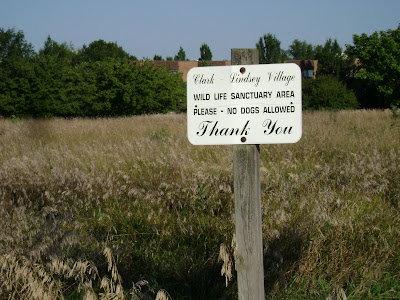 The far side of the park is bordered by a retirement "village." A large expanse of lawn and carefully tended shrubs face this area left for the wildlife. The grounds of the complex itself has many gardens; in fact, it was one of the gardens featured on the Garden Walk Beckie and I took in June, although we didn't have time to visit it then. I am told that residents who are able and wish to, help to maintain the gardens. I think when I am really, really old this might be the perfect place for me. 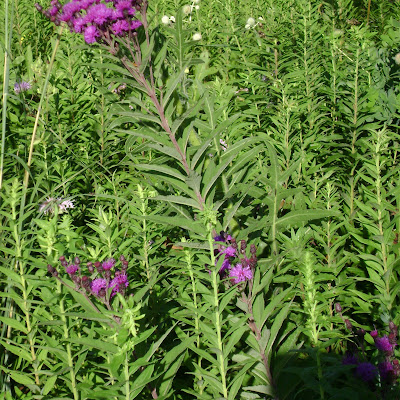 One final mystery plant. I noticed only a few specimens of this plant, and most were not near the edge of the walkway where I could photograph them. Unfortunately, the sun was so bright by this time that I couldn't see my viewfinder and didn't realize I'd cut off the top of the plant. The flowers are a bright magenta, and the foliage reminded me of some type of phlox, but I really don't know what it is. 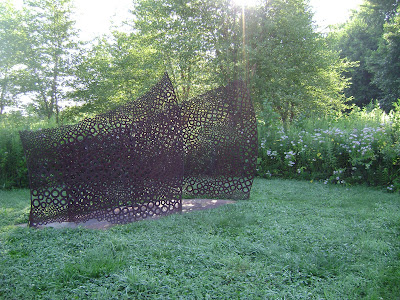 I admit to total ignorance when it comes to modern art, especially sculpture, so I paid little attention to the works of art in the garden. I did like the curved, airy design of this piece, however. By this time I was on the last leg of the trail, a sidewalk bordering a busy four-lane street. The peaceful reverie I had fallen into during my walk was interrupted by the sounds of cars rushing past on their morning commute to work. I was thankful I wasn't part of that frenzy; perhaps some of them noticed me and wished they, too, had time to leisurely stroll among the wildflowers.
By the time I reached the small bridge leading back into the parking lot, I realized what a different mood I was in. I had just finished thirty minutes of exercise, but I had forgotten I was "working out." Instead, I had become so captivated by the sights, sounds, and smells around me that any worries or problems had completely left my mind. I felt refreshed and totally at peace.
I paused to look at the small stream below and thought of Wordsworth's reflections on the power of nature to change a person for the better. 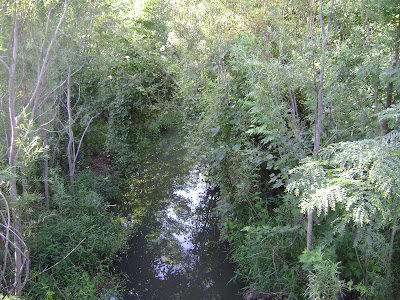 I'll leave you today with a few lines from one of my all-time favorite poems, which Wordsworth wrote after a walking tour around the River Wye.

These beauteous forms...
....have not been to me
As is a landscape to a blind man's eye;
But oft, in lonely rooms, and 'mid the din
Of towns and cities, I have owed to them,
In hours of weariness, sensations sweet,
Felt in the blood, and felt along the heart;
And passing even into my purer mind,
With tranquil restoration...
...While with an eye made quiet by the power
Of harmony, and the deep power of joy,
We see into the life of things.

---from "Lines Composed a Few Miles Above Tintern Abbey"
Posted by Rose at 4:12 PM