Visitors Welcome (with a few exceptions)

Last week I realized that I have published over 50 posts and have been blogging for almost 5 months now. Blogging has opened a whole new world to me and introduced me to some wonderful people. One of the benefits of blogging for me has been the way I have changed in looking at some of the smallest things around me. For example, thanks to bloggers like Cheryl, I have a newfound appreciation for insects.

I've never been much of a "bug" person. My main interest in bugs before was in eradicating the pesky ones, although I did have a short-lived interest when my younger daughter was in high school and had to compile an insect collection for an advanced biology class. That year she had just undergone surgery for a torn ACL and was on crutches for a month. That made it rather difficult for her to gather insects, so naturally ever-helpful Mom, as well as other family members, had to help with the project. It wasn't unusual for my mother to drop by with some extra tomatoes from her garden--and a few plastic containers with preserved specimens she'd found for the collection. Even the mother of one of Daughter's volleyball teammates showed up at a ballgame proudly bearing several insects she'd found for her.

Of course, I was the main insect gatherer, though. I scoured trees after dusk with a flashlight looking for cicadas and hopped around the yard with a butterfly net--you think taking photos of a butterfly is difficult, try catching them! The neighbors probably were laughing behind their curtains at me, but I know for sure the volleyball moms thought I was pretty amusing. At one game I attended (even though Daughter had to spend her senior season on the bench) I saw an insect she didn't yet have. Climbing over and under the bleachers, I finally captured it and trapped it in the only container I had--a bag of popcorn. No one asked to share my popcorn after that!

All that is behind me now. There are no more plastic containers in my freezer holding perfectly preserved beetles or moths. Instead I am happy to see them in my garden, pollinating the flowers, eating the insects I don't want, or just providing a little entertainment for me.

My main flowerbed, next to the house, has become quite the bee magnet. Bumblebees are especially attracted to all the purple flowers I have, but they also enjoy the coneflowers. At one time I was frightened of bumblebees, but I've found they ignore me as long as I don't try to pick the flower they're on! 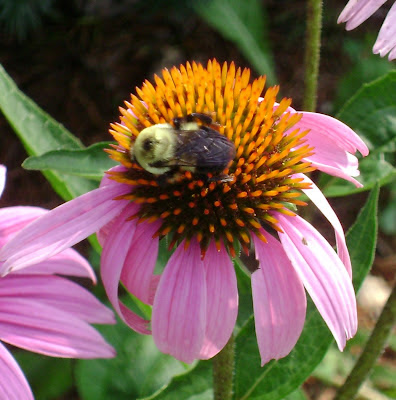 Last week I was trying to take some photos of the few white and cream-colored hollyhocks that have blossomed. I didn't even notice until after I'd taken the photo that this bee had climbed into the bloom. At least I think it was some kind of bee--he was so covered with pollen that I really couldn't tell what kind of insect he was. 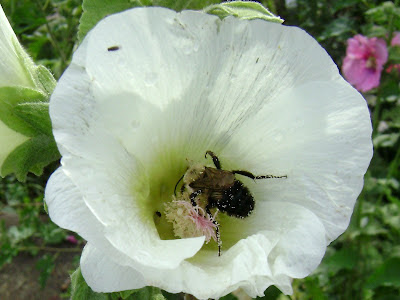 I have other kinds of bees as well, but I don't know enough about them to identify them all. The threadleaf coreopsis below attracts swarms of some kind of small bee. This photo was taken in the morning before they come out, but I doubt you would have been able to see the small creatures anyway. 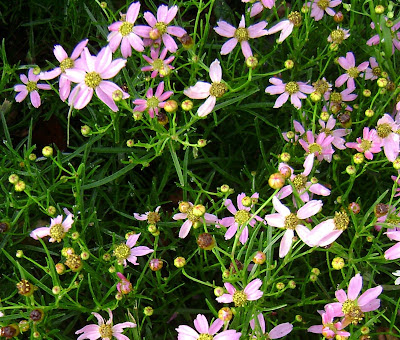 I know a spider is not an insect, but an arachnid, but I often think of it as being in a common category. I know many people, including my son, have phobias about spiders but they're one creature I've never minded, as long as they stay outside my house. I enjoy watching the Daddy-long-legs in particular, and I never disturb them because I know many of them will eat the insects I don't want around. 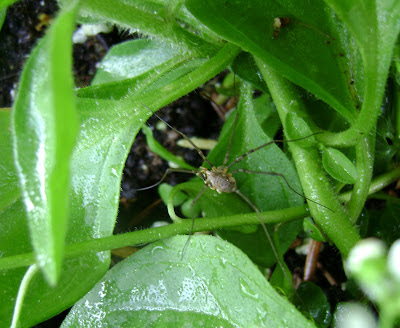 I have no idea what the insect below is; perhaps someone can identify him. I was trying to photograph a blossom up close when I spotted him--he has the longest anntenae in proportion to his body I've ever seen! 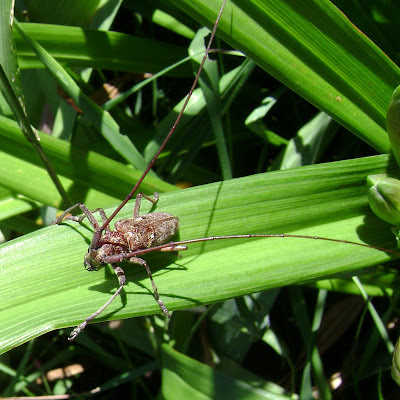 Of course, there are still some insects I don't like and never will. I've yet to see the purpose of flies, mosquitos, or cockroaches. Another species of pests that I've been complaining about the last few weeks is the Japanese beetle. Short of using a pesticide such as Sevin, there is no long-lasting effective measure to eradicate these little monsters. Picking them off by hand in the early morning while they're still drowsy and depositing them into a soapy solution is still the best method. But more will come to replace those you've destroyed. 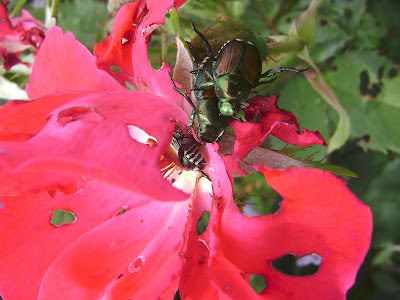 Here's another unwanted guest I found on my squash plant yesterday morning--the squash beetle. I did buy a bottle of Sevin for these pests and plan to use it before they kill the whole plant, unless someone has a better suggestion instead. A beekeeper friend of my dad told him if you spray it late in the evening, it won't harm bees. 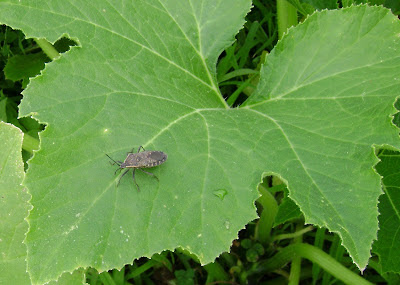 Not quite as annoying is this little guy, the common grasshopper. In large numbers, though, they can be quite destructive, especially for the farmers' crops. As much trouble as I have catching an insect in repose long enough for a photo, this guy seemed curious about my camera and eager to pose. 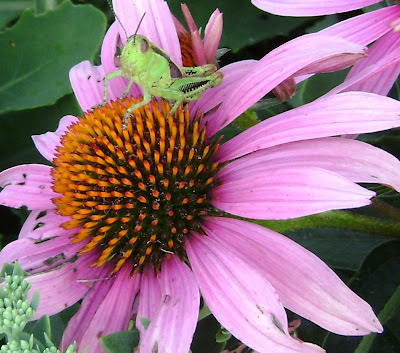 I am especially fond of any insect or other animal that helps to control the less desirable members of the species. We seem to have an abundance of dragonflies this year, which help to control the mosquito population. I've seen so many beautiful photos of them on other blogs I'm almost ashamed to show this one. Not only is it difficult to catch them standing still, but their transparent wings are difficult to photograph in sunlight. 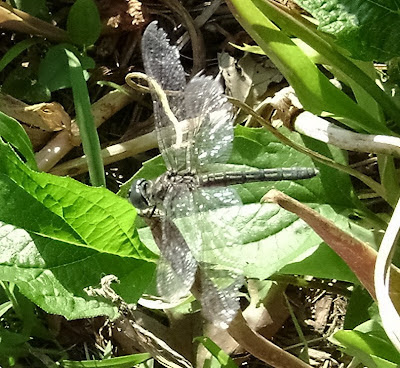 Here's an insect that will never be considered handsome by any means, but I've always found him to be intriguing. This young praying mantis was climbing the trellis holding my clematis when I spotted him. I haven't seen any full-grown mantises this year, but I have seen several small ones like this one. 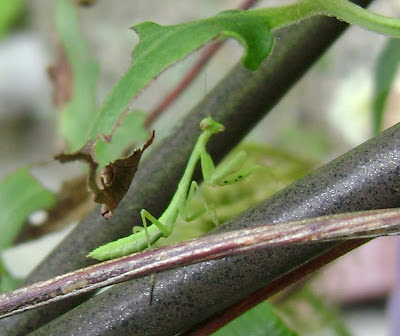 One of my favorite animals for insect control, though, is the common toad. I've run into this little baby several times (or perhaps it was his brother or sister) while working in the shade garden. Although I'm not brave enough to pick them up bare-handed, I often scoop them up in some fashion when I find them and put them back in my garden. 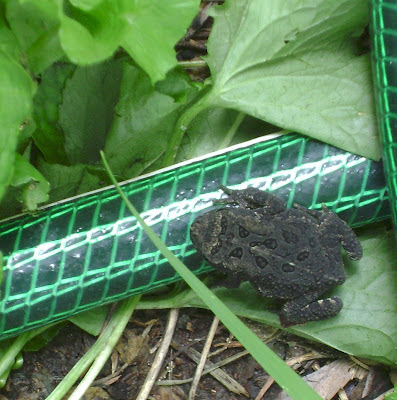 For sheer beauty, though, nothing can match a butterfly. I don't think there is anyone who doesn't like a butterfly. I purposely planted flowers that would attract butterflies, and usually in late summer they flock to my garden. So far I've seen only one or two monarchs and a beautiful blue/black butterfly I can't identify floating by, but I'm hoping they will bring the rest of their families here soon. 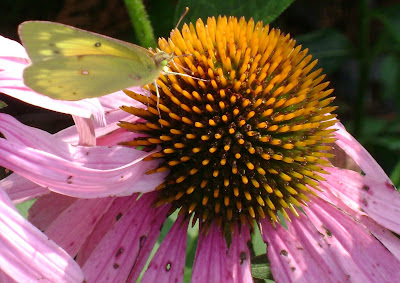 I won't pretend to have "embraced" the insect world in its entirety, but I have come to find that many of them are truly fascinating creatures. I may not sit and watch the ants work all day, but I do feel a little Thoreau-like in observing them for awhile in the garden.
Just a note: Although I have a short post planned for Friday's Muse day, I won't be around "Blog Land" much for the next several days. My daughter is coming home from Arizona for a long weekend and to help my parents celebrate their 60th wedding anniversary. I can't wait to see her--she hasn't been home since Christmas. I'll try to visit everyone again early next week.
Posted by Rose at 1:00 AM