Have you gotten "sticker shock" at the grocery store lately? Yesterday I bought a five-pound bag of red potatoes for $3.99. Even in the winter when produce is usually more expensive, I rarely spend that much on ten pounds of potatoes. But the real shock for me came when I looked in the meatcase at the local Meijer on Monday. A one-pound package of Oscar Mayer bacon was $5.49! I don't eat much bacon, but I was looking forward to BLT's when the tomatoes ripen. Looks like we may be eating LT's instead. And things aren't going to get better any time soon: a news report yesterday predicted that food prices are going to go up another 5% in the next six months.


All this gives me one more reason to be happy I planted a vegetable garden this year (though there isn't any bacon growing there!), and why I probably will expand it next year. I don't grow many different kinds of vegetables, so that I make sure we do eat what I grow. For example, broccoli is too much trouble, in my opinion, because of the pests, so I would rather buy that in the store. But I feel foolish buying a small zucchini when it is so easy to grow. A few weeks ago I wanted a zucchini for a pasta salad I was making and spent $1.00 for a small one. I haven't planted any since the "Zucchini Explosion" of 2006. That year I gave away lots of the vegetables and made zucchini bread, zucchini-apple bread, zucchini-carrot bread, zucchini cake, zucchini brownies, added grated zucchini to spaghetti sauce . . .you get the idea. It got so bad my daughter wouldn't eat anything without asking first whether there was zucchini in it. Now I wish I'd planted some this year--I could have had a veritable zucchini goldmine in my garden!


We have had some spinach, lettuce, and kohlrabi from the garden already, but our real favorites are just beginning to ripen. Yesterday I picked the second bunch of green beans, some summer squash (you can't make this into bread, unfortunately), and the real treat--the first tiny tomatoes.


There is nothing like a tomato fresh from the garden. I feel sorry for anyone who has known only the mushy, tasteless tomatoes sold in the supermarket. I got a little carried away this year planting tomatoes and have several varieties, including grape, cherry, Roma, and standard tomatoes such as Supersonic and Beefsteak. The tag for these tomatoes simply said "Grape." 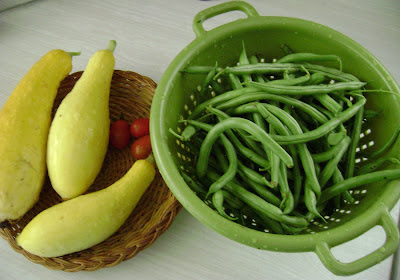 I even have a variety of cherry tomato from England, courtesy of Cheryl (via Beckie). 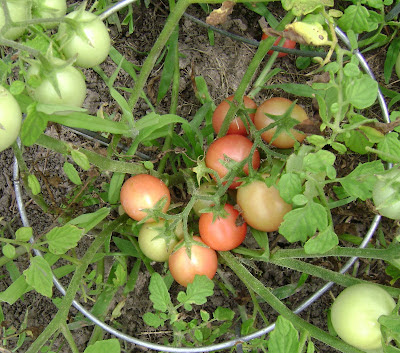 By the end of August I hope I will be swamped with tomatoes and will be making tomato juice and tomato sauce to put in the freezer as well as all the fresh ones we will eat. I say I hope because some of the plants are not looking too healthy right now. There are yellow and even brown leaves on most of them. I usually stick with the varieties that are resistant to fungus, so I think the problem is in the watering. Quite frankly, we have had too much rain this year. Everything I have read about tomatoes says that they need regular, consistent watering. Unfortunately, the rain gods haven't paid attention to these recommendations.

Another reason to be thankful for growing my own tomatoes is the scare this year over salmonella and other possible contaminants in produce. Although tomatoes have now been taken off the recall lists, it still is more reassuring to know exactly where your produce came from. There was an article in the newspaper recently about the importing of produce. The article featured a model farm in Mexico where extreme precautions are taken to ensure safe handling of its lettuce all the way to the supermarket. The photo accompanying the article showed workers dressed in protective clothing, hats, and even face masks picking lettuce. I couldn't help feeling sorry for these workers. I pick vegetables only during the cool parts of the day, not for 8-12 hours in extreme heat, let along wearing layers of clothing. But what really struck me was that the writer explained the whole process of getting the lettuce to the supermarket, ending with the proud comment that it arrived safely on the supermarket shelves just a week after being picked. A week! Last Sunday I picked the first green beans and had them on the table within an hour!

Some random thoughts from the last few days . . . . . . Yesterday while I was sitting at the computer reading blogs, I kept hearing a low-flying plane. It took awhile for my fog-clouded brain to register what I was hearing. Finally, I ran outside with the camera and got a picture of this crop duster. 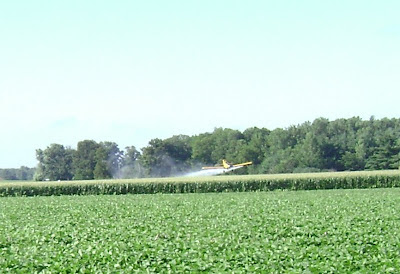 Since I was so slow in getting out, I didn't get a good photo because he was on his last round over this nearby field. He must have had several jobs to do because I could hear him in the area all day but never this close. I found out later he was spraying a fungicide that this particular variety of corn is susceptible to in wet weather.

Rambling along here, I noticed the other day that my clematis is blooming once again. That's not so unusual because it bloomed twice last summer as well. But what struck me as strange was the color of the bloom. You'll notice it is definitely lavendar. 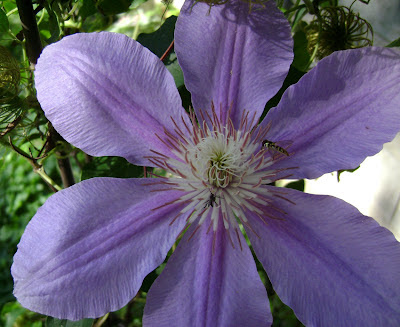 But below is what it looked like this spring. 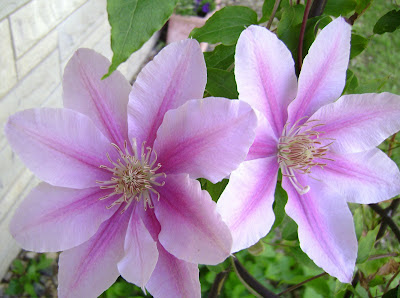 Is this normal?? Now that I think about it, last year, its first in bloom, the clematis bloomed just once--about this time of the summer-- and had lavender blooms. Earlier this spring I thought I had identified the plant as a "Nelly Moser," but now I am completely befuddled.

Speaking of clematis . . . . I wanted to thank everyone for their helpful comments on my last post about the sense of smell. You gave me some great ideas for plants to add to my garden to make it smell more sweetly. And I would still welcome any other suggestions. The power of the sense of smell to trigger strong memories seems surprising, while memories triggered by sights or sounds seem more logical in a way. Which brings me back to the clematis . . . I have seen the ever-popular Jackmanii clematis pictured on several posts. I know this variety has been around for years and is probably the most common, but I can't bring myself to plant one. Yes, they are beautiful, and they are purple, a favorite color of mine in the garden. But the Jackmanii triggers a very strong visual image for me. My grandmother was quite the gardener, and many of her flowers still live on at my parents' farmstead. My grandparents did not have indoor plumbing until I was about 5 or 6, and it always amazed me how my grandmother managed to get everything done, including tending flowers, when she had to pump water for doing dishes, laundry, and many other household chores. Grandma had a large Jackmanii clematis near--you guessed it--the old outhouse! My apologies to all of you who have these lovely clematises, but perhaps you'll understand when I say I can't see one without thinking of an outhouse.
One last parting comment . . . I have gotten daylily envy from seeing all the lovely daylily posts the last few weeks. So when I found a few on sale this past week at Meijer's I snatched up this "Lavender Dew." 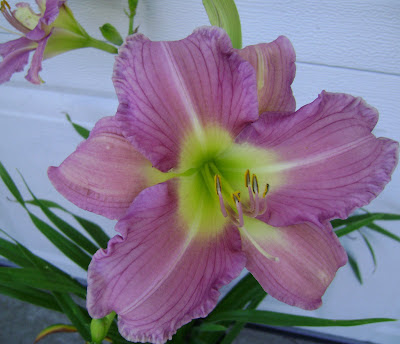 I know it's not the right time of year to plant daylilies, but I have been scouring the local stores and garden centers whenever I have time lately for end of the season bargains. This one wasn't a great steal, but at least it was still healthy. I did find a few real bargains on Friday at the same sale Beckie went to, but I'll save them for another day. Right now I need to get busy and plant them before it rains again. Hope you all are having a great weekend!
Posted by Rose at 5:35 PM